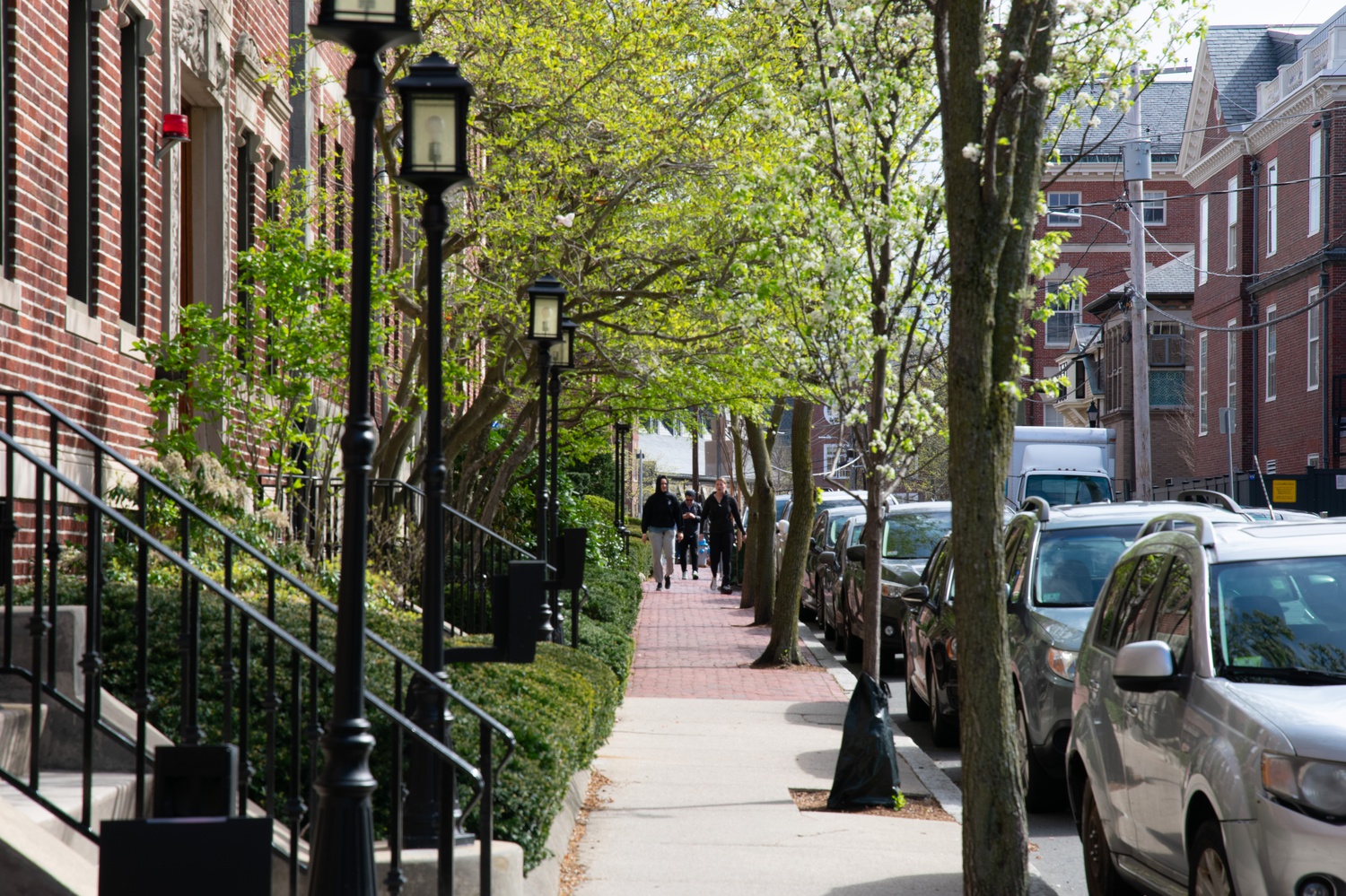 Trees line Prescott Street. Some local activists are concerned that even with bolstered community support, Cambridge still lacks the infrastructure to fully take care of its trees. By Julian J. Giordano
Advertisement
Advertisement

The Fight to Save All of Cambridge's Trees

Some local activists are concerned that even with bolstered community support, Cambridge still lacks the infrastructure to fully take care of its trees.
By Nicolas Dominguez Carrero and Abby Zachary

Twice a week, Gretchen M. Friesinger ’75 — a long-time resident of Porter Square — fills up her five-gallon buckets with water, places them in her flat wagon, and wheels them half a block to the group of street trees that she “adopted” several years ago. Through what is now known as Cambridge’s Urban Forest Friends program, Friesinger effectively assumes responsibility for the care of these local trees, providing each one with upwards of 40 gallons of water a week.

In July, the city released a series of public service announcements asking residents to assume more responsibility for the care of trees near their homes. The drought that swept Massachusetts this summer had been taking a significant toll on the health of Cambridge trees, and the city needed all hands on deck to preserve the quality of the urban forest and make sure each tree received enough water. “Even trees that were well-established were struggling,” says Friesinger, who began giving each tree under her care an additional 20 gallons each week in response to the PSA. Throughout the summer, Friesinger and other concerned residents shouldered some of the labor the city lacked the capacity to provide.

“If you’ve got a hose or a bucket and can water a street tree near you, please do!” Friesinger wrote.

Of course, she notes that this level of dedication can be taxing — especially considering that the same drought conditions harming the trees can take a toll on their human caretakers as well. “We had this work day, and it was to clean up Porter Square and also deweed the tree wells on Mass Ave,” she says. “It was 90 degrees and it was really challenging physically — so, tough on the trees and also tough on the people.”

However, a couple sweaty afternoons are more than worth it to Friesinger, who was initially inspired to help out with the trees because of the important environmental role they play in providing shade, reducing heat, and absorbing carbon dioxide from the atmosphere. She was also pleasantly surprised by how trees seemed to facilitate deeper connections between community members.

“It’s almost like the trees are invisible,” she says. “But when I’m up there watering and people stop, and we’re having a conversation at that tree, I feel we both go away having had a good conversation and a new appreciation of what it is to have trees on the street.”

But some local activists are concerned that even with bolstered community support, Cambridge still lacks the infrastructure to fully take care of its trees. According to the city’s 2019 Urban Forest Master Plan, increasing climate change-driven threats like droughts, higher winds, and more pests mean Cambridge’s urban forest could be cut by nearly a third by 2030 and by more than half by 2050. To prevent this outcome, the plan outlines several action items for restoring tree canopy and boosting the health of established trees. Chief among these goals is to plant 1,000 new trees each year.

Attempting to plant this many new trees on top of the grueling conditions of the ongoing drought and increased watering needs “definitely spread us thin” says Andrew Putnam, Cambridge’s superintendent of urban forestry and landscapes.

Putnam maintains that community participation is a crucial element of ensuring the long-term sustainability of Cambridge’s urban forest, rather than an emergency outsourcing of responsibility that should ideally fall in the hands of the city government.

“Residents watering the tree adjacent to their property is the most cost-efficient, effective way to water and maintain a tree,” he says. “For the canopy to grow and mature, it will require a more engaged citizen to ensure that happens — monitoring the trees and having a dialogue with public works.”

Cambridge4Trees, a local organization focused on preserving the city’s tree canopy, collaborated with the city government to produce the PSA calling on additional community help. Members Charles D. Teague ’74 and Michael F. Nakagawa worry that the city lacks the infrastructure to care for both the existing tree canopy and the thousands of new trees being planted. “The more trees they plant, the further behind they get. They’re just pushing a rock uphill,” Teague says. “Watering by the residents is necessary, but it's not enough,” he adds. “It's a problem of scale.”

When trees go without proper care and deteriorate in health, they can become safety hazards that must be cut down — resulting in significant gaps in the tree canopy while new trees slowly fill them in. These gaps disproportionately impact low-income residents of Cambridge, such as those in the Jefferson Park Apartments, an affordable housing site slated to lose 58 trees from its canopy beginning in early November.

The proposed cuttings are a part of the Jefferson Park Federal Modernization Project, which will build 103 new units of affordable housing at Jefferson Park. The Cambridge Housing Authority heading the project determined that “many of the existing trees were found to be in poor condition or posed as dangerous safety risks” and thus ought to be cut during construction.

For James Williamson, a Jefferson Park resident, the trees’ poor condition was not the result of innocent oversight. “There’s been a history of poor maintenance and neglect at Jefferson Park, in my opinion, that has contributed to the loss of beautiful, and even majestic, trees, long before any new construction initiatives or drought conditions,” he says.

While the city plans to plant 194 new trees to replace those being cut down, trees often need 30 years or longer to develop mature canopies, according to the UFMP, meaning current Jefferson Park residents will likely never reap the benefits of the added tree canopy.

For Friesinger, Teague, and Nakagawa, curbing the loss of the existing mature trees like those in Jefferson Park Apartments represents one of the biggest gaps in the city’s implementation of its UFMP. Given the predicted increase in heat and droughts that this summer foreshadowed, it may be especially difficult for younger, newly planted trees to grow in the coming years, further highlighting the urgency of maintaining the health of established tree canopy.

The city does recognize the disparities in tree coverage across Cambridge, particularly for communities of color or low-income communities like Jefferson Park. The UFMP specifies that equity is one of the city’s core values, and that it is working toward an “urban canopy that provides benefits to all its citizens,” but much work is yet to be done to achieve this goal. As Williamson says, “All of our trees — and our tree canopy — deserve equal protection.”