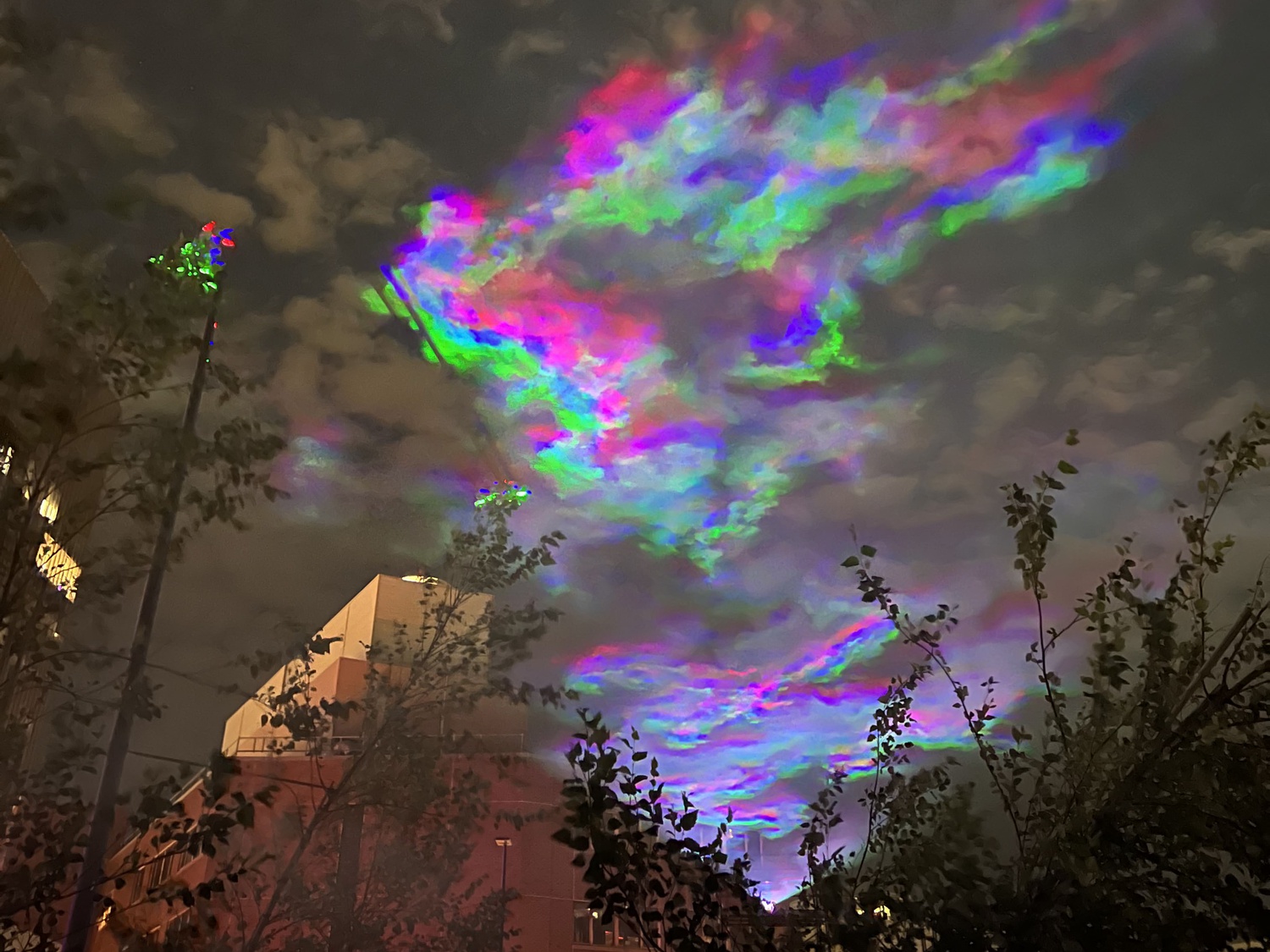 Borealis, an art installation that served as the centerpiece of this year's Cambridge Science Festival, simulates Northern Lights by projecting light beams onto mist. By Meimei Xu
Advertisement
Advertisement

Welcome to “Borealis,” the art installation that served as the centerpiece of this year’s Cambridge Science Festival — a weeklong celebration of science, technology, engineering, art, and math.
By Sophia N. Downs

Hidden around a corner just beyond the Kendall T stop lies a string of lights, food trucks, and a gentle mill of people. A mist hangs above — colors come and go, like clouds rolling before a storm. First swirling green, now overlaid with pink, then rapidly moving toward a vanishing point.

Welcome to “Borealis,” the art installation that served as the centerpiece of this year’s Cambridge Science Festival — a weeklong celebration of science, technology, engineering, art, and math.

Designed by self-described “artivist” Dan Acher, Borealis “brings the experience of the Northern Lights to cities the world over,” according to its website. The installation, which was on exhibit from Oct. 6-9, features light beams projecting onto mist, creating an aurora-like effect, while a musical composition by Guillaume Desbois establishes a soothing atmosphere. Acher designed Borealis to create spaces for people to connect, to explore issues of climate change, and to connect art with technology. Borealis has traveled to 12 countries since its debut in 2016.

Cambridge Science Festival director Brooke W. Ciardelli had been following Acher’s work, and Borealis in particular, for some time. When she began planning this year’s festival, she immediately thought of bringing the installation to Cambridge for its first stint in the United States.

She notes that Borealis departs from the festival’s past programming. “Another goal of the festival this year was to try to situate the programming more directly at the intersection of science and art. I would say in past festivals, it tackled science,” she says. “We wanted to make the art side of the equation more robust.”

Ciardelli also felt this year’s festival needed something to pull the community together after the isolation brought on by the Covid-19 pandemic. She and her team wanted an installation “that was healing and in some way that was larger than life, and that [was] filled with a sense of wonder,” she says.

For Ciardelli, hosting an exhibition like Borealis is more important now than ever. “Such deep-seated fear [is] manifesting itself in hate and division, and it’s a tough time for us as human beings right now,” she says. “We just need to find the pure wonder of humanity, the environment, and community.”

The wonder is evident on faces throughout the soft hum of people at the festival. College students sit on parking blocks or the curb; children lay on the concrete; couples wander slowly with arms around each other. The accompanying music is meditative — the sort of sounds you hear at the end of a yoga class.

“Initially I was underwhelmed,” says Tyagaraja Ramaswamy, a Cambridge resident, and his feelings were echoed by other visitors. Borealis does not seem to wow visitors by its shock value, but instead soothes those who linger. When asked to describe their impressions, friends Anna Stringham and Emma Garner respond in unison: “very zen.”

While large events like festivals tend to be action-oriented, Ciardelli hopes that Borealis encourages visitors to “simply be and exist in a common space with people.” When asked if she has a takeaway, Borealis visitor Grace Liu says that the light and the swirls remind us to “grasp what you can have right away, because it never is there forever.” Her friend Violet McCauluy, however, pauses for a moment before asking, “Should I take away something?”

Borealis simply asks viewers to focus on the present moment. The art installation juxtaposes a moment of peace amidst a bustling city, a pseudo-natural phenomenon fenced in by half-lit high rises. When watching and listening to Borealis, there’s no other agenda. No errands to run, no work to do. It’s simply about connecting with the here and now — the people with you, the place where you are.

Perhaps, as McCauluy implies, there’s nothing specific to take away from Borealis. Just a sense of wonder.