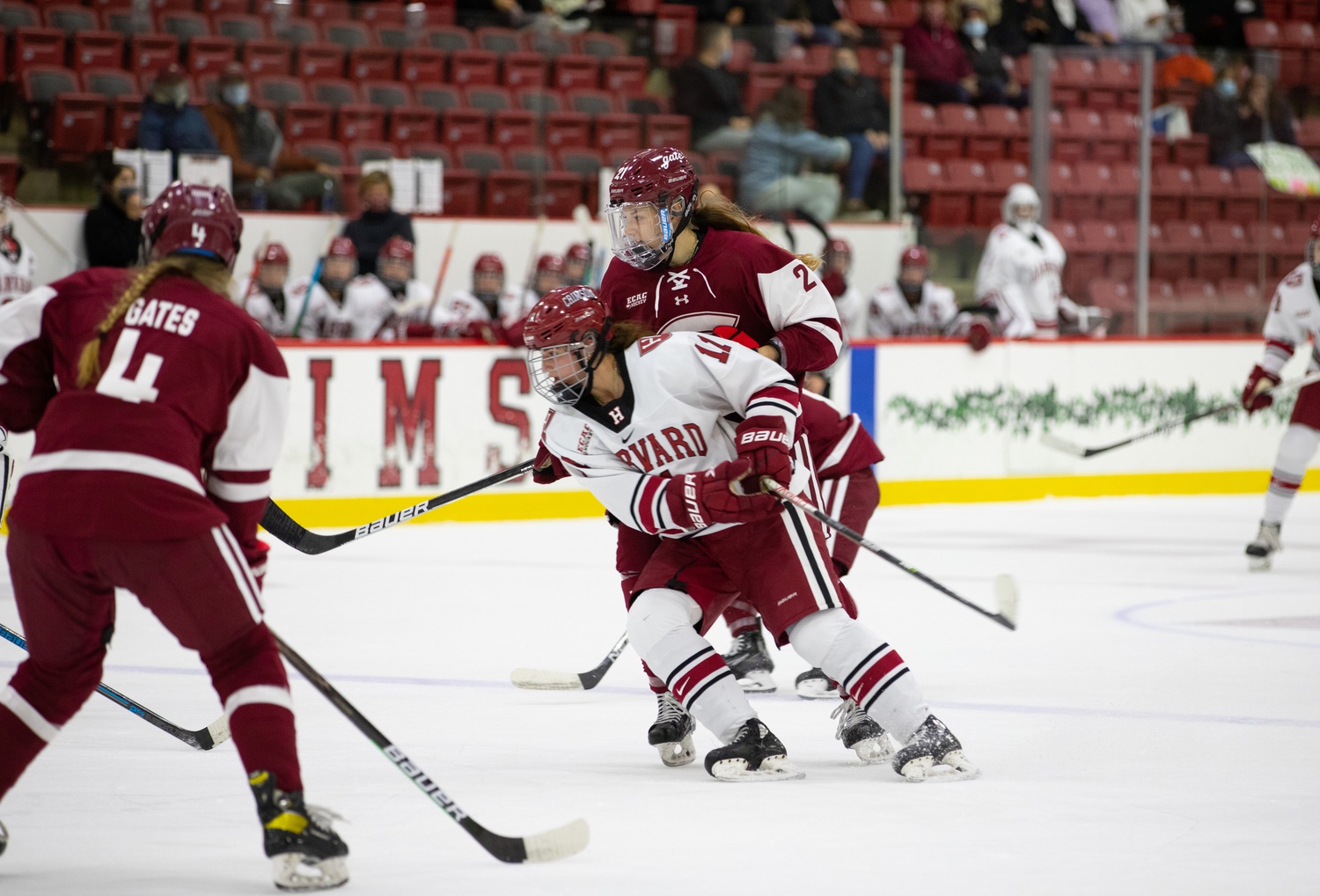 Junior forward Kristin Della Rovere skates through traffic in an Oct. 30 overtime loss to Colgate. In the Jan. 14 win over Brown, she scored a point in her 12th straight match, the longest streak by a Crimson skater since 2012-13. By Angela Dela Cruz
By Christopher D. Wright, Crimson Staff Writer

As classes wrapped up and campus grew quieter, the postseason push for the No. 9/9 Harvard women’s ice hockey team heated up. Winter break play was filled with highs and lows for the Crimson.

“It is definitely [about] getting back to the basics as you gear up for the first game back, '' said senior forward Becca Gilmore.

Days before the Crimson returned to action, the Harvard Athletics department announced a new indoor spectator policy. The policy limited the attendance for games in an effort to fight the rise of Covid-19 cases. However, it also diminished the home-ice advantage and the crowd energy, so Crimson morale depended mostly on the team itself

“Your team has to boost the energy on the bench more. You are not going to get that energy from a big crowd,” said Gilmore.

The final game of Harvard’s homestand pitted it against Dartmouth as it tried to repeat its performance from the first game of the season and sweep the season series. The Crimson did just that, easily dispatching the Big Green behind a strong third quarter. Its eight goals were a season high along with a season low two penalties.

Junior forward Anne Bloomer scored the lone Harvard goal in the first period. In the second period, junior defender Maryna Macdonald would score off a pass from first-year forward Paige Lester. Junior forward Kristin Della Rovere then extended the lead by scoring a short-handed goal in the waning minutes of the second period. The Crimson continued to pour it on in the third period with goals from Bloomer, sophomore forward Shannon Hollands, and first-year forward Hannah Chorske. Bloomer’s two third-period goals gave her the team lead and her first career hat trick. Chorske’s goal was the first in her collegiate career.

The win gave senior goalie Becky Dutton her second shutout of the season and the fourth of her career.

Entering the matchup, Harvard sought to split the season series by avenging its Nov. 12 1-3 loss to Yale. The Crimson relied on a strong first period to propel them to the win.

Harvard opened the scoring just one minute into the game when senior defender Kate Glover scored her first goal of the season. Senior defender Emma Buckles then extended the Crimson’s advantage by capitalizing on a five-on-three power-play.

Harvard held Yale scoreless across the second and third period due in large part to Dutton’s performance. All in all, she saved 20 of the Bulldogs’ 21 shots.

Bloomer finished off the game by scoring an unassisted goal with seven seconds left on the game clock.

Harvard’s first period power-play goal extended its power-play goal streak to six consecutive games. The Crimson were outshot by the Bulldogs, who held it to its lowest amount of shots all season. 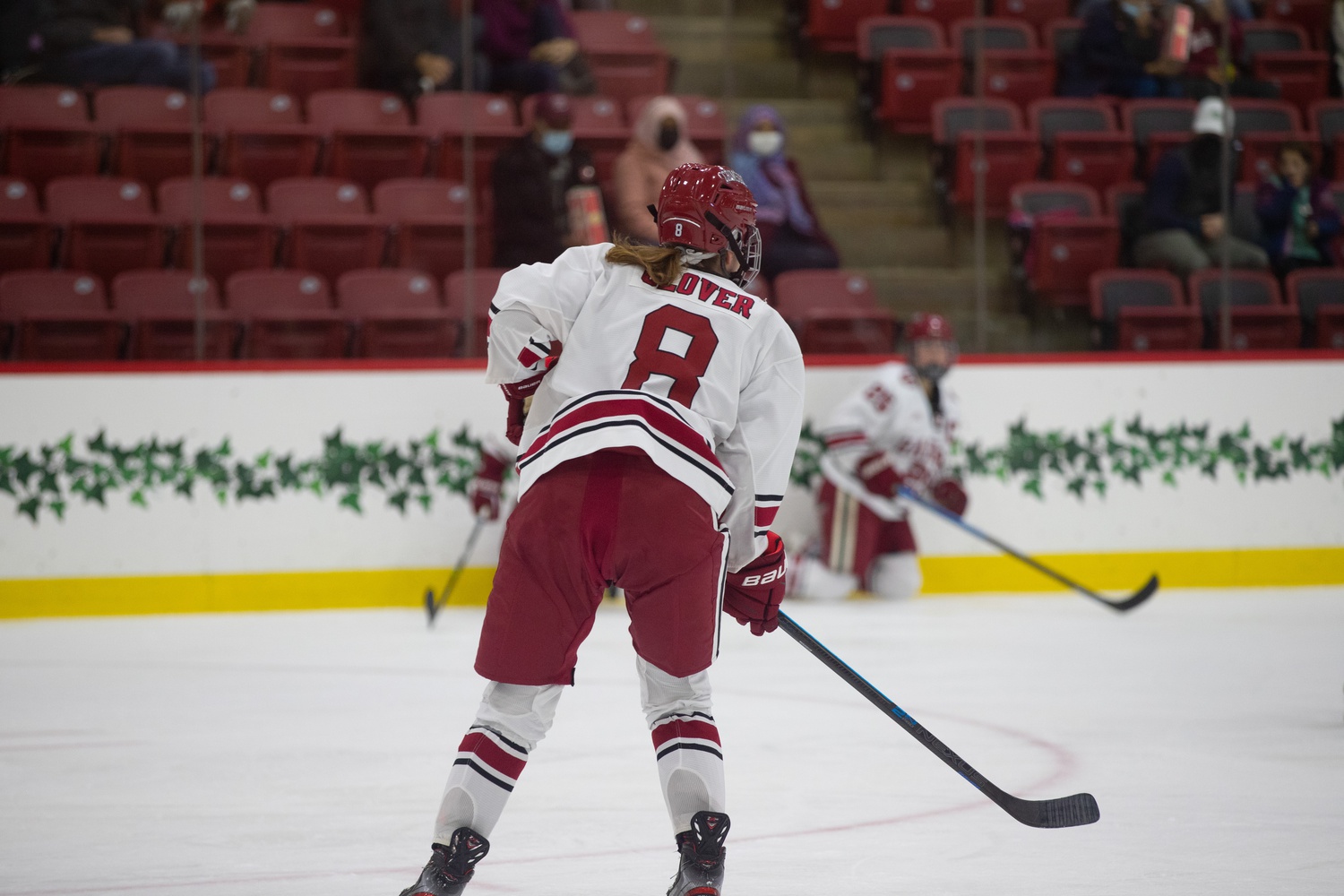 Senior defender Kate Glover awaits the puck in an Oct. 30 overtime loss to Colgate. In the Jan. 15 win over Yale, she scored her first goal of the season. By Angela Dela Cruz

After a 13-day break due to Covid-19 related issues, the Crimson sought to shake off the back-to-back losses. In its first conference matchup of 2022, the Crimson responded to an early goal by Brown and held the lead the rest of the way.

Brown struck first six minutes into the first period when Tina Paolillo guided a shot into the net. The one goal advantage lasted just a minute before Harvard tied up the game on the power-play when Macdonald fired a shot from the blue line past goalie Hayley Kliczko. First-year forward Taze Thompson then gave the Crimson the lead when she fired a forehand shot that ricocheted off the left post and found the back of the net.

Harvard extended its lead further in the second period when at the 11 minute mark, Hollands scored off a pass from first-year defender Mia Biotti. Three minutes later, Gilmore guided Thompson’s pass into the goal. The power-play goal was her 10th on the season, pacing the team. The goal also represented Gilmore’s 100th point as a member of the Crimson. She became just the 25th player in school history to achieve that mark.

“It is obviously a great individual goal, but it really means the team is doing well,” said Gilmore. “I have been very fortunate to play with some talented linemates that have helped me eclipse that goal.”

Della Rovere scored an empty net goal with seconds remaining to close out the game for Harvard. This goal, along with her earlier assist, extended her point streak to 12 games. The streak is the longest by a Crimson skater since the 2012-2013 season.

The win pushed the Crimson’s winning streak in conference play to four. Harvard also scored multiple power-play goals for the fifth time this season. The Bears’ nine shots were the fewest the Crimson had given up all year.

The 2022 slate started off the same way as the 2021 slate ended, with a loss to Minnesota-Duluth. Harvard held multiple leads throughout the game, but they failed to fend off the Bulldogs’ comeback.

Harvard’s senior forward Dominique Petrie opened up the scoring at the 12 minute mark in the first period by rebounding her first attempt off the post and guiding it into the net. The goal earned first-year forward Gabi Davidson Adams her first collegiate point with an assist. Three minutes later, UMD tied the game up when Gabby Hughes converted on the power-play.

Six minutes into the second period, the Crimson converted another power-play when Thompson redirected junior defender Kyra Willoughby’s shot attempt from just inside the blue line. Nine minutes later, the Bulldogs responded with two goals in quick succession. Elizabeth Giguere and Anna Klein scored to give UMD a one goal advantage.

Hughes netted her second goal of the game five minutes into the third period to extend the Bulldogs’ lead to two. Then, later in the period, Della Rovere slid a shot into the net to cut the Bulldogs’ advantage in half. Looking for a late equalizer, Harvard decided to pull its goalie. The extra attacker was not enough to complete the comeback as UMD would hold on for the win.

In the set against Minnesota-Duluth, Harvard lost back-to-back games for the first time this season. The Crimson fell to 2-2 in games in which it scored multiple power-play goals. Harvard also lost the faceoff battle for only the second time in the 2021-2022 season. Among a few positives for the Crimson, Thompson’s three-point performance marked her new career high.

The two matches could have bolstered Harvard’s out of conference resume, which currently features only one win over a ranked opponent. After the match, Harvard head coach Katey Stone noted that the recent surge in Covid-19 cases played a role in the matches’ outcomes.

“We put ourselves in the best position to be successful under the circumstances, but we had quite a few Covid issues on that weekend,” she said.

The Crimson’s matchups versus Colgate and Cornell were both rescheduled due to Covid-19 related issues.

“We were below the minimum number of players to play in a back-to-back series,” Stone said. “[There were] different return-to-play protocols, so it was a little bit of a juggling act but we managed it.”

The New Year’s Eve showdown featured two teams within the top 10, with Minnesota-Duluth ranked No. 8/7. Harvard came into the match seeking to extend its winning streak to five games; however, Minnesota-Duluth came out strong and thwarted the Crimson’s efforts. The Bulldogs struck first and answered every Harvard rally to hold on for the victory.

At the four-minute mark, UMD’s Klein guided a pass from teammate Giguère into the net. An opportunity to tie the game up opened up in the 11th minute when the Bulldogs’ Katie Davis was called for a two-minute tripping penalty. The Crimson capitalized on the power-play in the 12th minute when Bloomer found the back of the net off of a pass from Gilmore. However, with less than two minutes left in the first period, McKenzie Hewett scored a power play goal to give Minnesota-Duluth a 2-1 advantage.

Both teams were scoreless in the second period until Hughes scored an unassisted goal in the final minute of the period.

With nine minutes left in the final period, Harvard’s Gilmore scored off crisp passes from Buckles and Della Rovere. The assist extended Della Rovere’s point streak to 10 games. After decreasing the deficit to one goal, the Crimson appeared to have momentum on its side for a comeback. However, it took only 30 seconds for the Bulldogs to seize back momentum. A quick goal by UMD forward Naomi Rogge extended Minnesota-Duluth’s advantage to two. Another goal by Hughes extinguished the possibility of any late-game heroics.

This loss was the fourth on the season for the Crimson and only the second in regulation. Despite dropping the match, Harvard had a few positive takeaways, winning the battle in the faceoff circle 30-22. The Crimson has had the faceoff advantage in every game since Oct. 30. This matchup was also the first time that Harvard had lost while scoring multiple power-play goals.

Although Covid-19 has led to postponements and thin lineups, it may have also produced a positive impact on Harvard’s season.

“We have been able to make some adjustments with different lineup changes because of the pandemic,” Stone said. “We are playing good defense, we got good goaltending, and we are putting pucks in the net.”

The Crimson’s 9-3-0 conference record moved it to first in the ECAC. Continuing its strong conference showing for the rest of the season could result in Harvard’s first NCAA tournament berth since its run to the national championship game in 2015.

“Especially team-first, everyone is going to do their part to make sure that this team can win championships and go all the way this year.” said Gilmore when asked what words best describe this team.

The Crimson will look to extend its winning streak when it travels to face Princeton (8-7-3, 6-4-1 ECAC) on Jan. 21. Currently, Princeton ranks top five in the nation in faceoff winning percentage. This will be the first game outside of the Bright-Landry Hockey Center in 2022 for Harvard. On Jan. 22, the Crimson will travel to Connecticut to face Quinnipiac (16-3-3, 8-2-0) in a potential top 10 showdown.