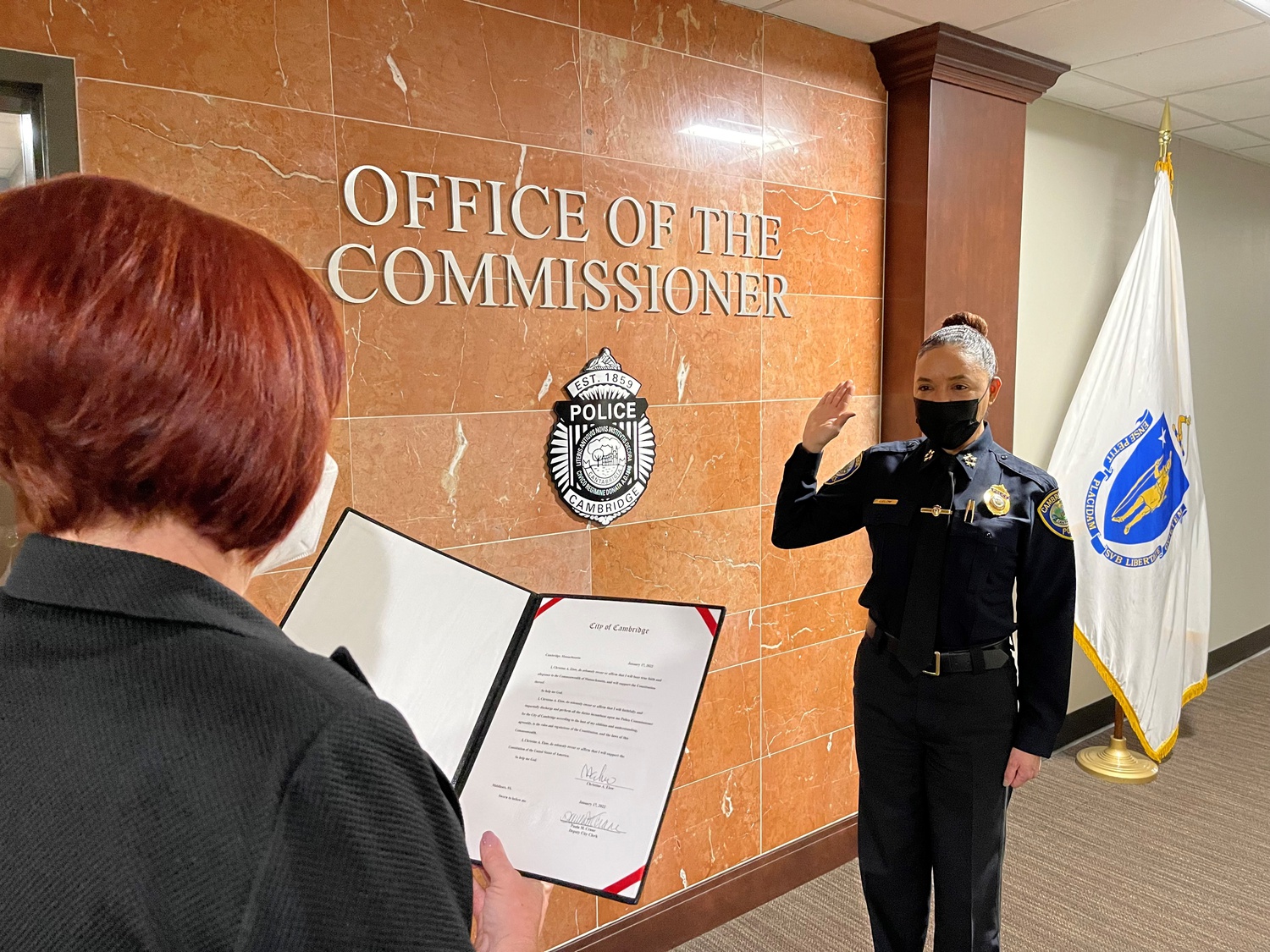 Christine A. Elow was sworn in as commissioner of the Cambridge Police Department earlier this week, making her the first woman ever to lead the force. By Courtesy of City of Cambridge
By Brandon L. Kingdollar, Crimson Staff Writer

Christine A. Elow was sworn in as commissioner of the Cambridge Police Department earlier this week, making her the first woman ever to lead the force.

Elow served as acting commissioner of the department for nearly five months following the departure of Branville G. Bard Jr. in August. She took over the post full-time on Tuesday after a private swearing-in ceremony at CPD headquarters.

Elow was also the first woman to serve as a CPD superintendent, a position she held for five years prior to taking over as acting commissioner.

In a CPD press release, Elow said she was “honored” to have the chance to lead the department, adding that she hopes CPD can be “the model for policing” nationally.

“My entire career has been dedicated to serving the Cambridge community. I grew up in Cambridge and love working in this city,” Elow said. “I will remain committed to bringing change and transformation to public safety and working collaboratively with the community.”

Elow, who was raised in Cambridgeport, is the first native Cantabrigian to serve as CPD commissioner, according to the city press release. She has served in the department since 1995, when she joined as a patrol officer after four years in the U.S. Navy.

Tyrone Bellitti, co-founder of the Cambridge branch of My Brother’s Keeper, a youth-advocacy initiative, said Elow’s lived experience in the city will be an asset to her tenure as commissioner.

“She’s been involved through so many different iterations of Cambridge’s history,” Bellitti said. “That firsthand experience and knowledge of the city and its evolution, it’s critical to her ability to help lead the seat that she’s in currently.”

During the summer of 2020, Bellitti worked with Cambridge city officials, including Elow, to support MBK Cambridge’s local youth outreach programs. Bellitti said Elow was a “key component” in getting support from the city.

“Working with Elow during those sessions, it was, you know, whatever we needed to help impact Cambridge kids in a positive way, we had her support,” he said.

City Councilor Quinton Y. Zondervan, who supports police demilitarization, said that Elow’s appointment is “certainly progress,” but added that she must be open to major public safety reform in Cambridge.

“We need transformation in our public safety approach, and that’s the most important aspect of this from my point of view — how willing she will prove to be in terms of achieving that transformation,” Zondervan said. “Business as usual is not acceptable to the impacted communities.”

Elow steps into her role as the Cambridge City Council is considering alternatives to traditional police responses that would limit direct intervention from officers in some instances. In June, the council approved a policy order asking the city manager to explore funding the non-profit Holistic Emergency Alternative Response Team, which describes itself as “an alternative safety program outside of policing systems.”

In an October conversation with the Public Square, a public access television show, Elow said any changes to emergency response must be gradual.

“There are so many calls that we’re responding to now that would be so much better suited for an alternative response,” Elow said. “Having a proposal like HEART — I think that this can happen, and I think it’s going to happen in layers.”

“She’s been at the table from day one, and a huge supporter of doing things different,” Belitti said. “She admits to our flaws and she speaks to our flaws, but then she also speaks to the solutions.”