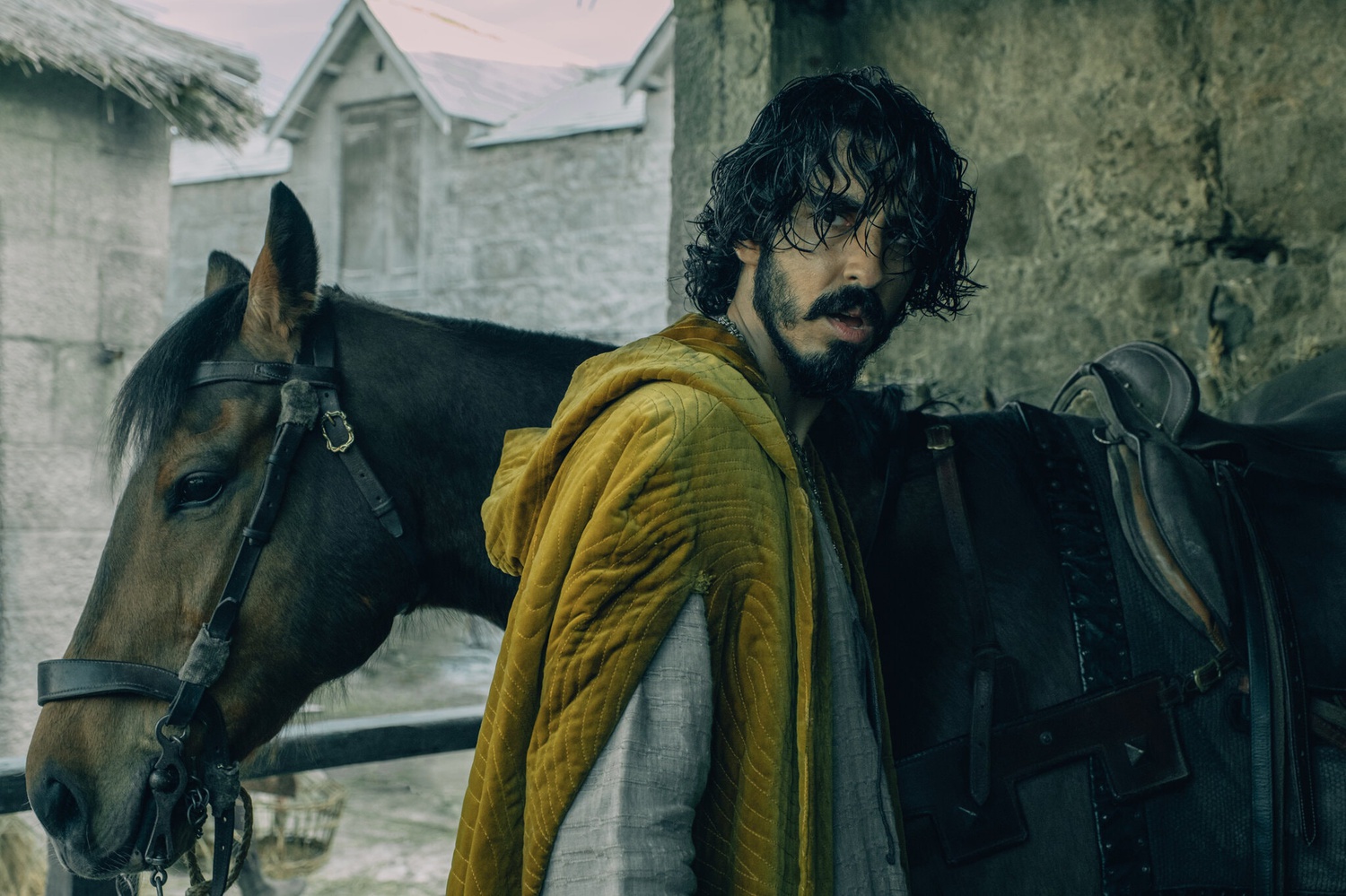 Dev Patel stars as Gawain in "The Green Knight," directed by David Lowery. By A24/Eric Zachanowich
By Aarya A. Kaushik, Crimson Staff Writer

A24’s latest film, “The Green Knight,” draws inspiration from the late 14th century poem “Sir Gawain and the Green Knight” ... and some other unexpected places, too. It builds on key elements of medieval lore — like Arthurian adventure, sensual romance, and magic with questionable intention — with a definitively modern style. The film keeps a lot of its source material intact: King Arthur’s nephew, young Gawain, engages in a Christmas game with the mythical Green Knight wherein he beheads him, and as a result must allow the Green Knight to do the same to him one year later. Although the original poem has no known author, the film adaptation is undeniably saturated with the influence of director David Lowery, whose background as a contemporary film director (not an Arthurian-era writer) clearly informs the storytelling. This is evident in the myriad references to cinematic favorites of Lowery; for example, he pays homage to Ron Howard’s “Willow” in an inspired shot of a skeleton swinging in a cage as the road symbolically splits before Gawain.

Lowery’s signature, then, is written in bold print all over the film. But so is that of Dev Patel, who commands the screen as Sir Gawain. He is perfect for the role; when we meet him, he is blithely boyish but in want of manhood, and the authentic desperation with which he searches for “greatness” establishes him as a heart-wrangling hero. Indeed, the palpable honesty of his performance as Gawain casts a compelling lens over the narrative, indelibly transforming it into a coming-of-age story. In his recent work (like 2016’s “Lion” and 2018’s “Hotel Mumbai”), Patel has demonstrated a mastery of his craft that is also on full display in “The Green Knight” — his charisma is potent but not patronizing, his emotion raw but never reckless.

And how often is it that we get to see an actor of South Asian heritage play a medieval hero? And another play an immensely powerful witch? Not often, which is why it is so integral to note Dev Patel’s casting, as well as that of Sarita Choudhary, who plays Morgan Le Fay (Gawain’s mother/King Arthur’s half-sister, and the witch without whom the story would not exist).

Indeed, Choudhary’s depiction of Morgan Le Fay is captivating, in that her intentions can never be clearly defined. In the opening few scenes it is revealed that, through slightly terrifying magic, she plays a part in the Green Knight arriving at King Arthur’s Christmas dinner, thus kickstarting the plot of the film and putting her son’s life at risk in the process. Does she do so as a loving but exasperated mother, looking to push her boy out of the house and into the real world? Or does she do so out of malevolent intent? Or, in true tiger-mom fashion (i.e., beyond any moral explanation), does she act with the aspiration that her son may sit on King Arthur’s throne? This ambiguity continues throughout the movie, in a manner well-aligned with the inconsistent pattern of Morgana’s depiction in mythology: a healer sometimes, but a source of great evil at others.

Where Lowery again breaks from tradition, however, is with the Green Knight, himself, stoically (and, at times, comedically) played by Ralph Ineson. The poem’s Green Knight is just that: a sophisticated, jewel-laden, silky-cape-wearing knight — whose skin just so happens to be bright green. The film’s version, however, is far wilder and far more complex: Ineson (through stunning makeup and design work) is crowned with ornate branches, his beard composed of twigs, his armor an amalgamation of leaves and ivy. It is as though he is an extension of the Earth itself, wild and intensely arresting. This imagery is especially clear in a shot toward the end of the film, one year after the initial fateful Christmas, when Gawain finally finds his way back to the Green Knight, who is seated in a “throne” of branches: He appears intertwined with the throne, and with the roots of the trees around him.

This depiction of the Green Knight is overtly pagan, which provides sharp contrast to the ultra Christian King Arthur and Queen Guinevere — a move that seems intentional from Lowery. Indeed, his version of King Arthur — played by Sean Harris — is weak, very much toeing the line between life and death. Harris does bring a sense of warmth to the role (a particularly beautiful scene where he gently washes Gawain’s face comes to mind), but that doesn’t overshadow his frailty. The juxtaposition between the pairing of Arthur/Guinevere and Morgana/Green Knight symbolizes the Christian vs. Pagan conflict that is synonymous with medieval times. Lowery is careful to depict the former as a waning empire, and the latter as a powerful (albeit complex) phenomenon.

The well-fleshed out core characters carry the weight of the film, especially as it wanders into more absurdist traces. Along Gawain’s journey to the Green Knight, there are a few encounters that disorient the story a bit, straying just far enough to create a threaded sense of eerie magic, the horror-esque backbone of the film. Some questions are never answered; some are implicitly meant to be understood. But “The Green Knight” makes one thing very clear: Each character (no matter how fleeting), each camera angle (no matter how dizzying), and each storyline (no matter how strange) is purposeful, and it is therefore the viewer’s responsibility to ask, “Why?”

Staff Writer Aarya A. Kaushik is a sophomore studying English and Music in Dunster House, and can be reached at aarya.kaushik@thecrimson.com.