Cross Country Kicks Off Season with Pair of Second-Place Finishes, Prepares for Next Weekend’s HYP Showdown 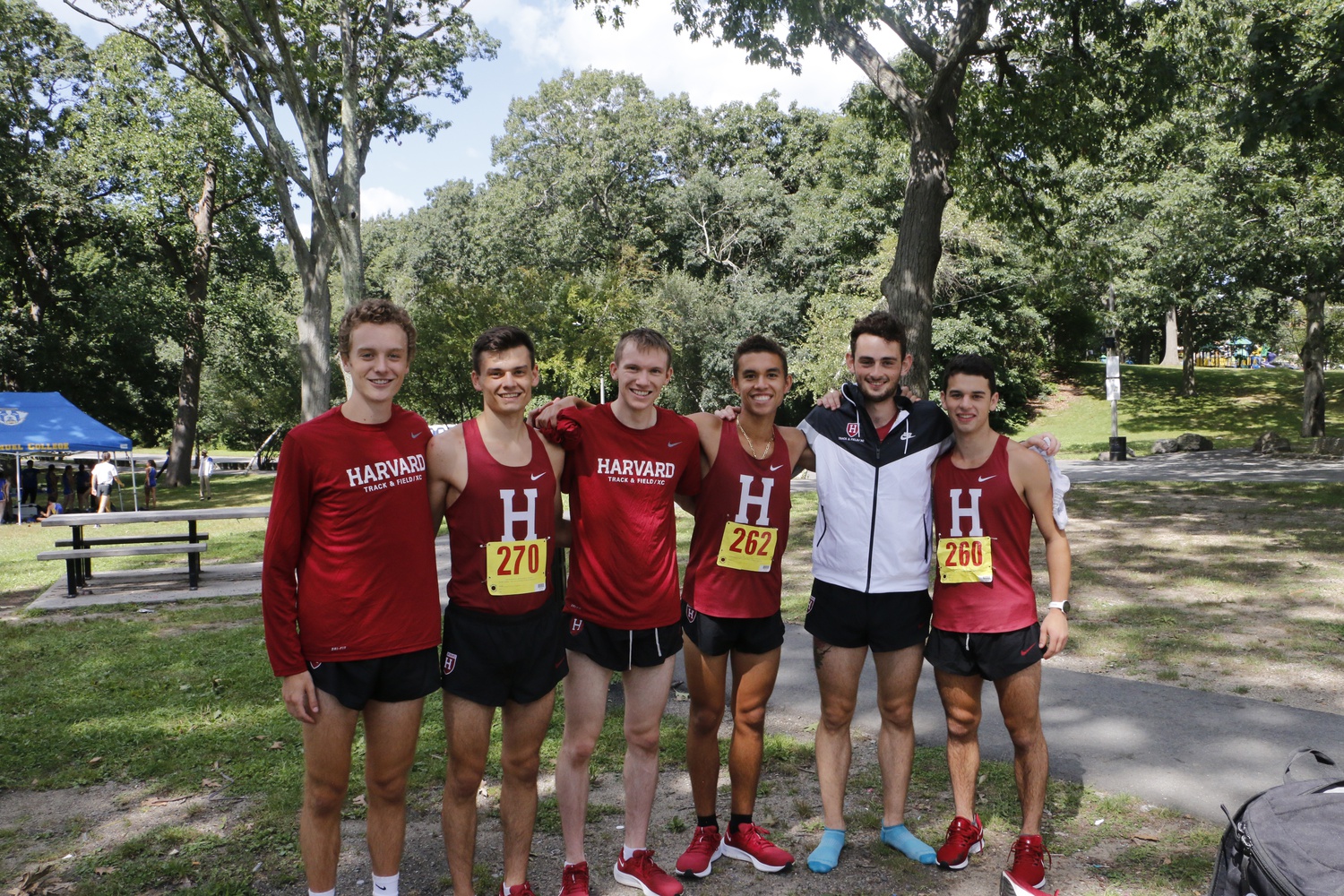 Members of the Harvard men's cross country team pose together at a competition for the first time in nearly two years. By Courtesy of Zeke Warren-Weigmann
By William Connaughton, Crimson Staff Writer

Last Friday, Harvard men’s and women’s cross country opened their 2021 campaigns at the Suffolk Short Course Invite. The event, which took place only 25 minutes away at Franklin Park, marked the first race for both teams since competing for the 2019 NCAA Nationals in Terre Haute, Ind., 22 months ago.

Nevertheless, both Harvard teams placed second in the meet behind Brown, getting their first taste of Ivy League competition. While neither team was at full strength, the Crimson was able to have seven first-years make their debut as Harvard runners, making the day a successful warm-up for both squads.

For the men, two first-years, Andrew Avila and Pierce Cousins made their debut, crossing the line 12th and 13th respectively. For the women, five first-years, Marianne Mihas, Ellaney Matarese, Cristina DeMeo, Jordyn Duby, and Sarah Naticchia, made their debut, with standouts Mihas and Matarese ranking 4th and 8th respectively. Other strong Crimson performances included senior John Fish, who finished in 7th, and senior co-captain for the women Judy Pendergast, who finished in 12th.

The upcoming season represents a large challenge for sports teams across campus, and cross country is no exception. With the Ivy League shutting down sports last year, many teams are combining athletes across five class years, from super-seniors who took a gap year in order to remain eligible to incoming first-years. Many core team members graduated in the off-year, and runners are now in senior leadership roles despite not having seen action for almost two years.

“From the men’s side, we are working with eight freshmen, which is certainly the largest incoming crew that we’ve had in the past few years,” junior co-captain David Melville said. “It has been great having so many new faces this semester, and I’m incredibly excited with how quickly the team was able to integrate the new guys and get everyone moving in the right direction as we head into our first few races.”

On the women’s side, roughly half their team is made up of first-years, adding to the abnormal nature of the program’s return to racing after a two-year hiatus. Team captains on both the men’s and the women’s squads have expressed their excitement with having so many new faces in the locker room and seeing the energy they bring to their respective teams.

“It’s been great to have a lot of new energy on the team and spend some time getting to run with some new faces,” senior co-captain Judy Pendergast said. “After a long year and a half of not being together as a team, we’ve spent a lot of time catching up and enjoying every run together. Things are starting to click again for our team after the first few weeks of adjusting back to college life, so I’m excited to see what will come in the next few months for this team.”

With the program coming off one of its best years in 2019, the expectations are high that this year’s program can pick up where it left off at NCAA Nationals two years ago. The men had their strongest finish at NCAA nationals since 1968, placing 15th amid some of the most talented collegiate runners in the world, and the women finished in 31st, capping off a surprising run based on where they were running at the beginning of the season.

“It’s always difficult to take a lot of information from races this early in the season due to where people are in their training,'' said Melville about the meet at Franklin Park. “Regardless, we had several athletes run very well, and getting experience on what will be our NCAA Regional course in November was certainly good practice.”

While neither Crimson squads ran their whole lineup, all runners were able to see the NCAA Regionals course first-hand, a crucial late-season race for Harvard that determines qualification for NCAA Nationals. Both team captains reiterated their goal to get back to NCAA Nationals and improve on their finish, despite the challenges of this season.

“In terms of goals, we are ready to improve upon our most recent season in 2019. This team is so capable, talented, and hard-working, so I think it’s definitely possible for us to advance to the NCAA Championships and improve upon our finish from 2019,” Pendergast said. “I think once we get some momentum [going] into the championship season, it will be exciting to see what we are capable of.”

Both teams will have many runners make their season debut next Saturday at Princeton’s home course in the famous HYP meet. This bout will see a more complete Harvard squad matched up against tough Ancient Eight competition in Princeton and Yale, a better indicator for the rest of the Crimson’s fall season.

This year, Princeton men’s cross country is ranked No. 3 in the Mid-Atlantic Region by USTFCCCA’s regional rankings, and the Tigers won their opening invitational at Lehigh with seven of the top 11 runners. Princeton women's cross country is even stronger, ranked No. 2 in the Mid-Atlantic Region USTFCCCA’s regional rankings, placing second at Lehigh last week. The Princeton women are also ranked nationally at No. 24. Yale’s programs do not have the same stature as Princeton’s this season in terms of pre-season rankings, but the Bulldogs remain a formidable rival for Harvard.