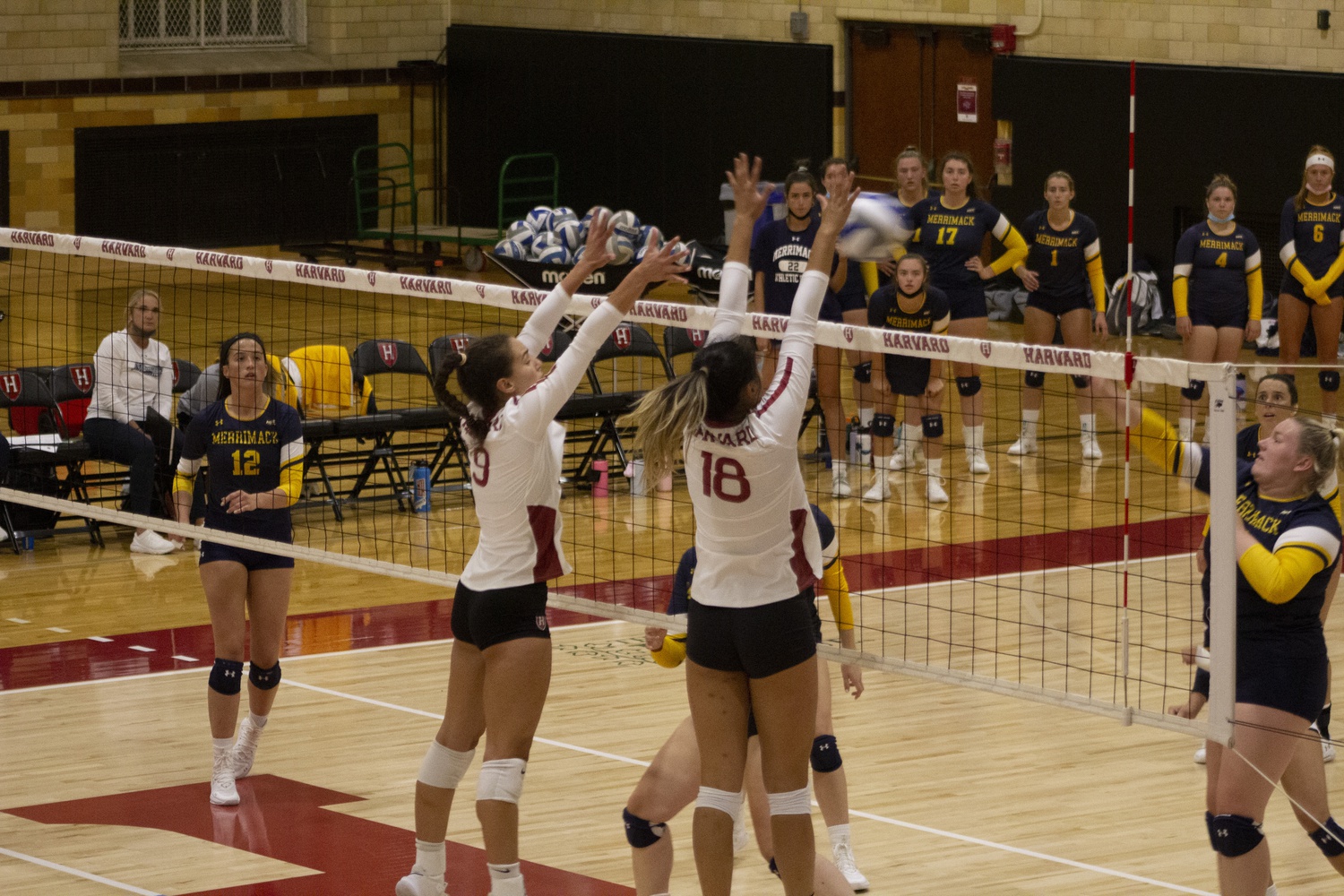 Ashley Wang skies high above the net for a key block in Saturday night's Merrimack contest. Wang complemented her defensive performance in the night cap with 12 assists on the offensive side in the earlier match against Austin Peay. By Aiyana G. White
By Griffin Wong, Crimson Staff Writer

On Friday and Saturday, the Malkin Athletic Center gymnasium played host to the Harvard Invitational, as Harvard women’s volleyball played its first three matches of the 2021 season.

In vital tune-ups before the Ivy League regular season begins on Sept. 24 at Dartmouth, the Crimson (1-2, 0-0 Ivy) bounced back from losses against Marist College and Austin Peay State University to claim victory against Merrimack College in its final game of the tournament.

The Crimson led from the outset against the Warriors (0-7, 0-0 NEC), who had yet to win a set in the 2021 season, and despite some early challenges, rebounded with a strong fourth set to comfortably claim its first victory of the season.

Harvard set the tone early, winning the first three points of the first set behind the strength of two kills by sophomore outside hitter Katie Vorhies and one by junior captain Jaimie Rao. These three early points would serve as a preview of Harvard’s dominance above the net for the rest of the match. The pair would go on to lead the Crimson in kills, with 16 apiece, as Harvard racked up 67 kills to the Warriors’ 37.

“It starts with the pass, and we have our awesome defense, and they’re just working really hard out there, and then we’ve got our setters, who are working hard, running all over the court, like [sophomore setter Ashley Wang], to get us those perfect sets,” explained Vorhies when asked about her success in kill situations.

Later in the first set, though, Merrimack would charge back, as the Warriors went on a 10-2 run to take a 24-22 lead after falling behind 20-14, putting them within one point of their first set victory of the season. Then, head coach Jennifer Weiss opted to put Wang in the game. Her decision to turn to the sophomore from Bolton, Mass., was immediately rewarded. Wang hustled to make a brilliant save, bumping the ball back over her head as she went crashing into the stands, keeping the play alive for it to eventually finish with an attack error by Merrimack middle hitter Kara Haase.

A few points later, the 6’1” left-hander was again in the center of the action as she finished off a set from first-year setter Rocky Aguirre with a kill to close out the first game for the Crimson, 28-26.

“I was definitely a little nervous at first. But I think it’s just putting it all out there on the line for my team and knowing that my teammates have my back. And then getting that game-winning kill was a great feeling, and just [knowing that all of my teammates support me] is amazing,” Wang said.

In the second game, Harvard fell behind early, as Wang’s service error stretched the Warriors’ early advantage to 13-8. Nonetheless, even after early tribulations, the Crimson stayed resolute, and the team’s patience eventually paid off. Despite Merrimack’s five-point lead, the Warriors started committing attack errors, and Harvard took advantage by converting kills en route to a 17-5 run and 25-18 set victory.

“Something I was thinking about is just how we need to work on all the little things and do the little things right, and just remember that our individual skills are going to correlate to the team’s success, and just trying to leave it all out there on the court,” said Vorhies of the comeback.

The Warriors refused to go away quietly, though. In a hard-fought third game, they erased an early 13-9 Harvard lead to grind out a 26-24 set victory, punctuated by a service ace by junior setter Quinn Kellogg, forcing the Crimson into a fourth set.

Merrimack, however, was unable to match its third-set intensity in the fourth. Harvard raced out to an early 6-2 lead behind two early service aces by Aguirre and never looked back, racing to a 25-14 victory to close out the match. The Crimson punctuated the victory with yet another service ace, this time by sophomore middle hitter Olivia Cooper, running its total to 12, compared to the Warriors’ 9.

“That third set that we lost, for us that was something where we were up and then they came back. We know that we have it in us, and they just got a run on us for a while, and that’s something that we talked about and we knew we could come back from it. And I think we really just came out with that much more fire,” Vorhies said.

“I think we all have confidence in each other that we know how to play volleyball and that we can win this game,” Wang added.

Vorhies and Rao led the team with 16 kills apiece, while Aguirre had 24 assists. Cooper again recorded five blocks to pace the Crimson, and first-year libero Lindsey Zhang chipped in with 15 digs. Meanwhile, from behind the service line, it was a team effort, with Cooper, Wang, and Aguirre each recording three aces.

Harvard will attempt to ride its momentum into next weekend’s Northeastern Tournament in Boston, where the Crimson will face Bryant (3-2, 0-0 NEC), Villanova (3-3, 0-0 Big East), and hosts Northeastern (2-4, 0-0 CAA). 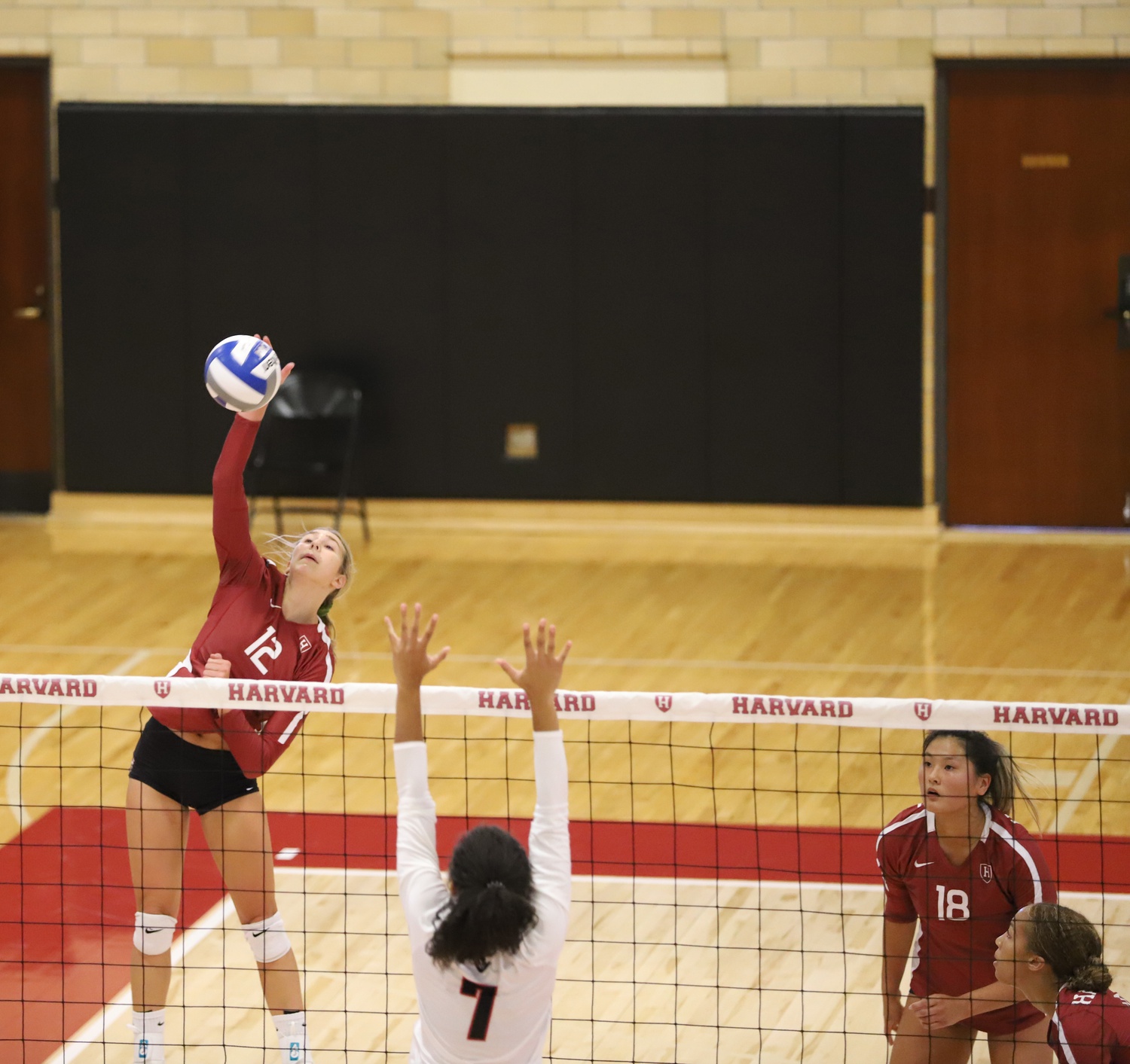 Katie Vorhies angles for a potential kill in Saturday's first match against Austin Peay. The Governors proved to be a formidable opponent, handing the Crimson a 3-0 defeat. By Owen A. Berger

In its Saturday afternoon matchup, Harvard suffered a 3-0 defeat at the hands of Austin Peay (4-2, 0-0 OVC). The Governors governed the game from the beginning, cruising to victory in each of the three sets. In particular, Harvard struggled with its service return, yielding eight aces while recording just two. Sophomore outside hitter Katie Vorhies emphasized the need for improvement in that area before the Crimson participates in the Northeastern Tournament next week in Boston.

“I think our service return is a big thing right now. That’s something that we’ve been working on in practice, and we’ve got a lot of room for improvement,” said Vorhies after the team’s victory against Merrimack College later in the day. “We’re all just working hard to try to get that where it needs to be.”

Harvard raced out to a quick lead in the first set, taking a 6-3 advantage behind a kill from Rao. However, Austin Peay clawed back, tying the set at 10 points apiece before a slew of errors from the Crimson allowed the Governors to win five consecutive points, putting the game in a precarious position at 15-10. Harvard coach Jennifer Weiss’ timeout at 19-12 was not enough to reset her team, as Austin Peay went on to close out the set at 25-16.

The second set consisted of a series of streaks, with neither team seemingly able to ward off the other’s momentum. An early 10-0 run was enough to put the Governors in the driver’s seat, achieving a 13-3 lead on the strength of a Brooke Moore kill. Harvard would later rally with a 7-1 run of its own behind three kills from Vorhies, who would go on to lead the Crimson with 16, to narrow the set to 15-11. But Austin Peay quickly responded with another 7-0 run to put the game all but out of reach at 23-12. The Governors would later close out the set, 25-15, on a kill from Mikayla Powell.

In the third set, the Crimson fell behind early and was unable to recover. A combination of errors from Harvard and a service ace from Erin Eisenhart let the Governors win five of the match’s first six points. Although the Crimson later rallied to tie the set at 8-8 after a block by Cooper, the Governors clawed back with another 5-1 run to give themselves a sizable cushion once again. Consistent with its overall dominance, Austin Peay closed with a Kelsey Mead service ace to finish off the set 25-15 and hand Harvard its second loss of the season-opening tournament.

Harvard did not have much time to rue the loss though, as the Crimson squad had only an hour to recover before preparing to face Merrimack College at 7 p.m. According to Wang, the team discussed making the most of kill opportunities after the Governors racked up 42 kills to the Crimson’s 27, as well as recuperating physically and mentally before the evening’s match.

“We just worked on finding the seams, the openings in the blocks, and just really having confidence in ourselves in putting those balls down. [In the loss to Austin Peay,] we might have been a little more timid in those,” explained Wang after the Merrimack game. “We had about an hour in between before we started prepping for the next game. I think a lot of us just went and relaxed and shook off our first game’s loss, just because [this afternoon] didn’t go exactly how we wanted to, so we all just took that time to reset, recharge, and just reset our minds to get prepared for this next game.”

Vorhies led the Crimson with eight kills, while she and first-year libero Lindsey Zhang tied with one service ace apiece. Zhang recorded nine digs, while Wang had 12 assists. Cooper led the team with five blocks.

In a hard-fought five sets, Harvard lost a nail-biter to Marist College (3-4, 0-0 MAAC) in its opening match of the 2021 season. Despite the loss in the match, Harvard scored several statistical victories over the course of the day, racking up 59 kills to Marist’s 48 and 14 aces to the Red Foxes’ five.

Crucial moments came in the first set, a competitive affair that the Red Foxes took by a score of 28-26. Harvard earned a set point at 24-23, after first-year outside hitter Corinne Furey recorded a kill, and then again at 25-24, thanks to a similar play from Rao. The Crimson could not clinch the final point though, and the Red Foxes roared back with two blocks and a kill from Vanessa Zolg to close out the set.

In the second and third sets, the Crimson never let the Red Foxes have a chance. After Marist pulled within 15-13 in the second set, Harvard responded with five consecutive points to put it out of reach, ultimately winning 25-19. The third set was a more dominant affair, with Harvard winning six of the first eight points before holding on to secure a comfortable 25-16 set victory.

Marist looked to be cruising towards forcing a deciding fifth set after taking a 22-17 lead in the fourth. Harvard roared back, though, behind the strength of two kills from Rao and two more from Vorhies, who would ultimately wind up with a career-high 17, forcing Marist coach Sean Byron to call a timeout. Byron’s timeout reset his team, and the Red Foxes won the final three points of the set, finishing with a flourish on Gabby Murray’s kill.

The decisive fifth set was back-and-forth early on as Rao and sophomore middle blocker Ava Rauser combined for a block to give the Crimson a 10-8 lead following a Marist timeout. After that, however, the tide turned as the Red Foxes took advantage of a few Crimson errors to win six consecutive points and secure four match points with a 14-10 lead. Harvard staved off one of them with a kill from Wang, but on the next point, Zolg and Sasha Van der Merwe combined to block Katie Vorhies’ kill attempt and win the match for the Red Foxes.

Harvard was led by a career-high 20 kills from Rao. Meanwhile, Wang led the team with six aces and 28 assists. Rauser managed to block six of Marist’s kill attempts, and Zhang had 13 digs.

— Staff writer Griffin Wong can be reached at griffin.wong@thecrimson.com.