Back to Blodgett: Men’s Water Polo Set to Return to the Pool this Weekend in Bruno Classic 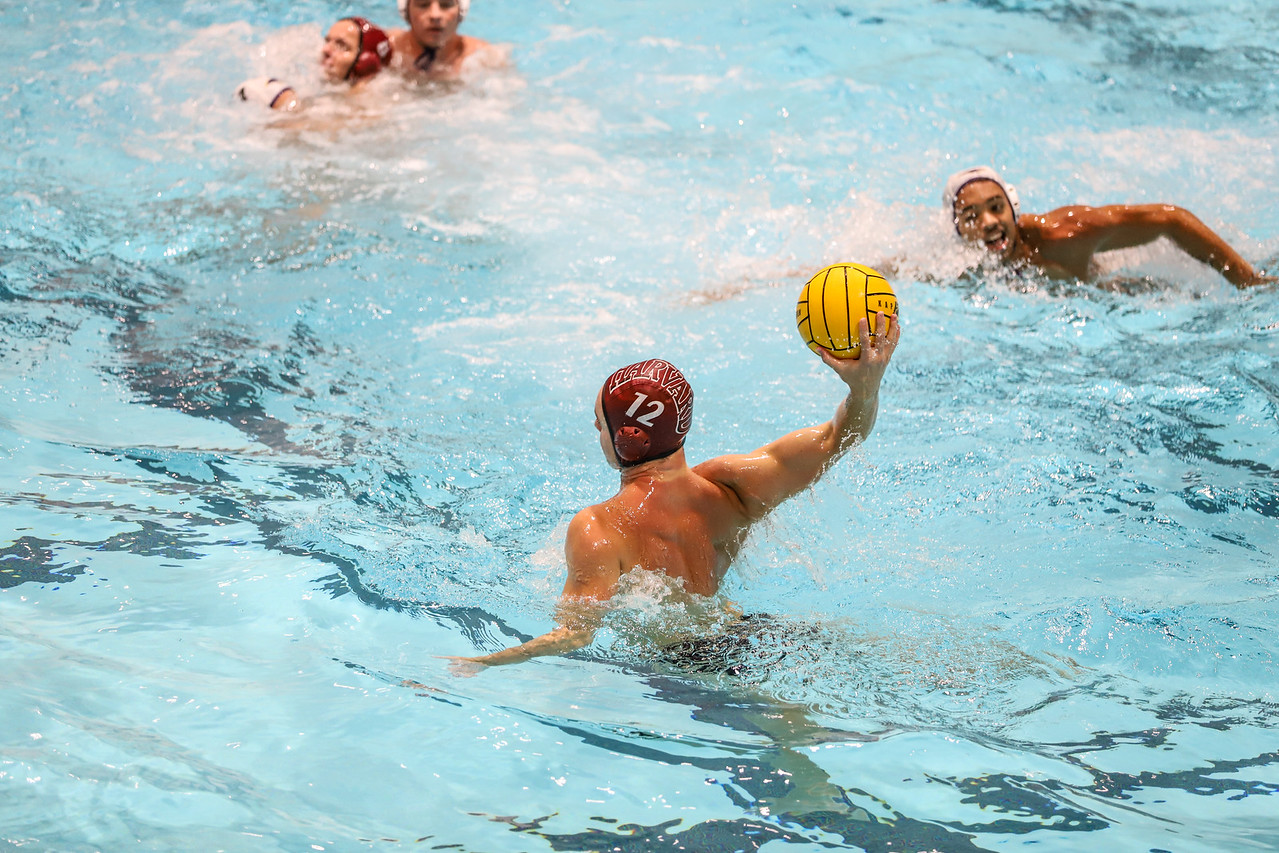 Junior attacker Alex Tsotadze winds up during a game in 2019. Tsotadze notched 56 goals as a sophomore in 2019, the third most on the team. By Quinn G. Perini
By Zing Gee, Crimson Staff Writer

It has been almost a year and a half since the pandemic stopped Ivy League competition, sent Harvard students home, and flipped the world upside down — but Harvard men’s water polo is finally back in the pool together and looking ahead to its first competition in 644 days.

“It was like Christmas morning … eight years old, you know,” said head coach Ted Minnis, reflecting on the team’s first full practice since its last competition. “It’s good to be back.”

Minnis, the reigning Northeast Water Polo Conference Coach of the Year, enters his 11th season as head coach, following an incredible 2019-2020 campaign that saw the team win an 8-7 thriller over rival Princeton for the NWPC Championship, Minnis’s 200th win with the program, and a berth in the NCAA Tournament in what was named The Crimson’s Game of the Year.

The team looks to follow up its previous undefeated regular season with a strong start, yet Minnis still stresses that Harvard has much to prove.

“We can’t worry about the past. We can’t compare ourselves to the past team,” Minnis said. “We have to be really focused on this moment and getting prepared for this weekend. I’m one that loves preparation.”

Preparation will be key for this weekend as Harvard faces off against four opponents it has not seen before. Fordham looks to be the biggest challenge, as the Rams come into the season at No. 20 on the Collegiate Water Polo Association’s Preseason National Top 20 Poll — nine spots behind Harvard at No. 11.

The weekend slate will be the first intercollegiate water polo competition for both first-years and sophomores, many of whom lost out on last season due to the pandemic. Minnis said the coaching staff talked in depth about having half a team that had never played together going into preseason.

Despite the Covid-induced challenges, Minnis finds a silver lining.

With the pandemic closing pools for an extended period of time, over the last 18 months, the focus for Crimson water polo had to shift, at least temporarily, to dryland workouts and staying fit outside of the pool.

“It’s been the longest break without water polo of my life,” junior goalie Noah Hodge said. “It was definitely weird, but it also gave me some perspective and kind of allowed me to recenter myself and realize how much I really do love playing the game.”

Throughout the hiatus in which the team could not play together, players used Zoom and phone calls to stay connected and present with one another.

Since half the team has yet to appear in a Harvard game, the Crimson will rely on the experience and leadership of older players. Hodge and junior attacker Alex Tsotadze will serve as the program’s 2021-2022 season captains.

Hodge is set to return after receiving the NWPC Tournament MVP award and an All-American honorable mention in the 2019-2020 campaign. Tsotadze finished third on the 2019-2020 team with 56 goals behind two former NWPC MVP of the Year winners — Charlie Owens ’19 and Austin Sechrest ’19.

“Alex has really worked hard on his game, both offensively and defensively. … I look for him to make big strides in all aspects of the pool,” Minnis remarked, also referencing senior utility player Jackson Enright, who is back for his senior season. “I think when you have a player of the caliber of Jackson on the team, I look for him to do big things.”

The Crimson return the other two of its top five goal scorers from the 2019-2020 team (behind Tsotadze) with sophomore Kaleb Archer (43 goals) and Enright (42 goals), while also bringing in plenty of younger talent, according to Hodge.

“A lot of guys [are] coming in with a lot of energy, a lot of passion for the game, a lot of knowledge about the game — and I'm sure as upperclassmen, we're able to learn a lot from them as well,” Hodge said.

Looking ahead to the start of the season, Hodge relayed his excitement and enthusiasm to be back, while also reinforcing the team’s mentality and preparation ahead of the fresh start against four teams it has never seen before.

“This goes back to just controlling what we can control. … We’re not going to be able to control what the other team is doing,” Hodge explained. “We’re really focused on our play style and getting all the young guys especially up to speed with our play system.”

Hungry to execute that play system, the Crimson will finally return to the pool this weekend, ending a pandemic-stricken 644 day hiatus.