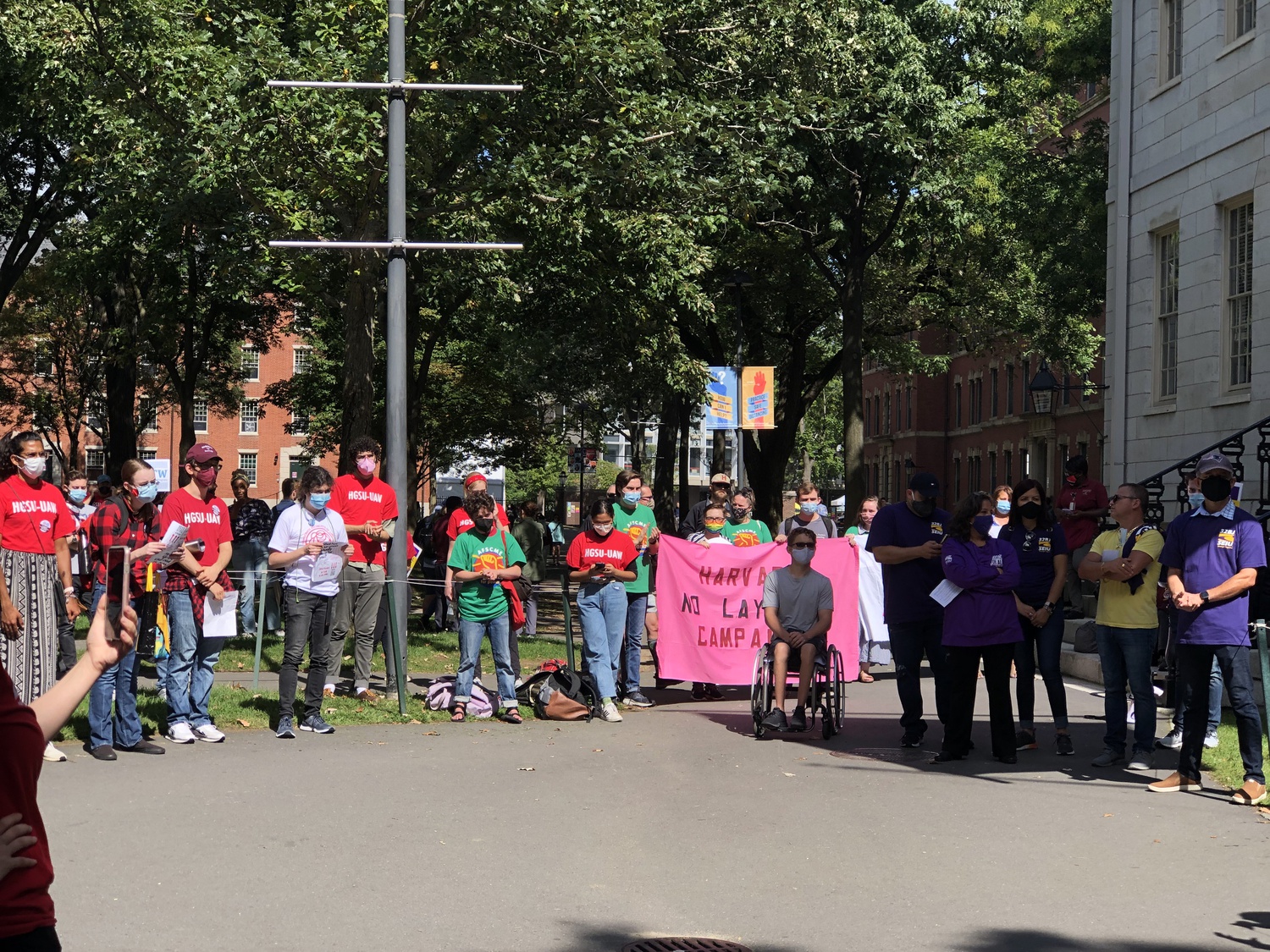 More than 120 members and supporters of five Harvard unions at various stages of contract negotiations with the University jointly rallied for contracts and benefits Tuesday. By Meimei Xu
By Meimei Xu, Crimson Staff Writer

More than 120 members and supporters of five Harvard unions at various stages of contract negotiations with the University jointly rallied for contracts and benefits in front of the John Harvard statue in Harvard Yard Tuesday, chanting, “What do we want? Contracts! When do we want them? Now!”

“It’s an agreement that protects our jobs and meets the core concerns that we went into these negotiations,” Kramer said at the rally. “But this isn’t done, because again, it’s not just the unity of our members. It’s the unity of all 12,000 workers represented here.”

“We paid for office furniture out of our own budget,” she said. “We put in hundreds of additional hours of work to get Harvard’s mission done. HUCTW members deserve salary increases and benefits that recognize our efforts and help us move forward with our lives.”

According to University spokesperson Jason A. Newton, Harvard has provided $40 million to idled workers and $15 million to idled contracted workers from March 2020 to April 2021 in compensation and benefits and has extended 70 percent pay for idled employees until the end of the year. Individual schools and units are determining pay for idled contracted workers.

Rheault, the HUSPMGU president, spoke next at the rally about the proposal to merge HUSPMGU and HUCTW. Harvard has rejected merger proposals in 2016 and in 2019, citing policy concerns.

“You say, ‘Well, why does it take five years?’” Rheault said. “That’s because we only have eighty people in our bargaining unit, and that’s also the reason why Harvard can try to take advantage of us.”

In an interview after the rally, Rheault said the merger with HUCTW, a union representing more than 5,000 people, would lend more bargaining power to HUSPMGU, a union with eighty workers.

“They won’t let us join HUCTW, and we don’t have much purchasing power, really, to get the wages we need,” he said.

“That sense of solidarity, that sense of worker organizing at Harvard — that’s a beacon of hope for workers all over the country,” Sobrinho-Wheeler said.

Rivera, the vice president of 32BJ, spoke next about the importance of union solidarity, leading chants in both English and Spanish. Dominick De Loretta, a security officer at Harvard, shared concerns over healthcare and reiterated the need for a contract.

Multiple speakers mentioned that unlike other unions on campus, HGSU-UAW’s current contract had no provisions for a grievance procedure for sexual harassment and discrimination ending in third-party arbitration. The University has proposed in August an appeals process for certain types of non-gender-based discrimination that could end in neutral arbitration.

“We were talking about negotiations and we all realized, ‘Hey, we have real struggles, and we need to talk to one another,’” he said.

HGSU-UAW member Jen L. Cruz spoke about the graduate student union’s issues at the bargaining table. Cruz spoke on the union’s proposal to remove the pay disparity for School of Public Health teaching fellows and Harvard’s acceptance of the proposal.

Tarina K. Ahuja ’24 wrote that she decided to attend the rally after learning about it on the First-Year Urban Program listserv.

“Harvard workers — HUDS staff, custodians, museum workers, graduate students, librarians — these are the people who take care of us and teach us,” she wrote. “It is our obligation to stand in unequivocal solidarity with them and to amplify them in this fight.”