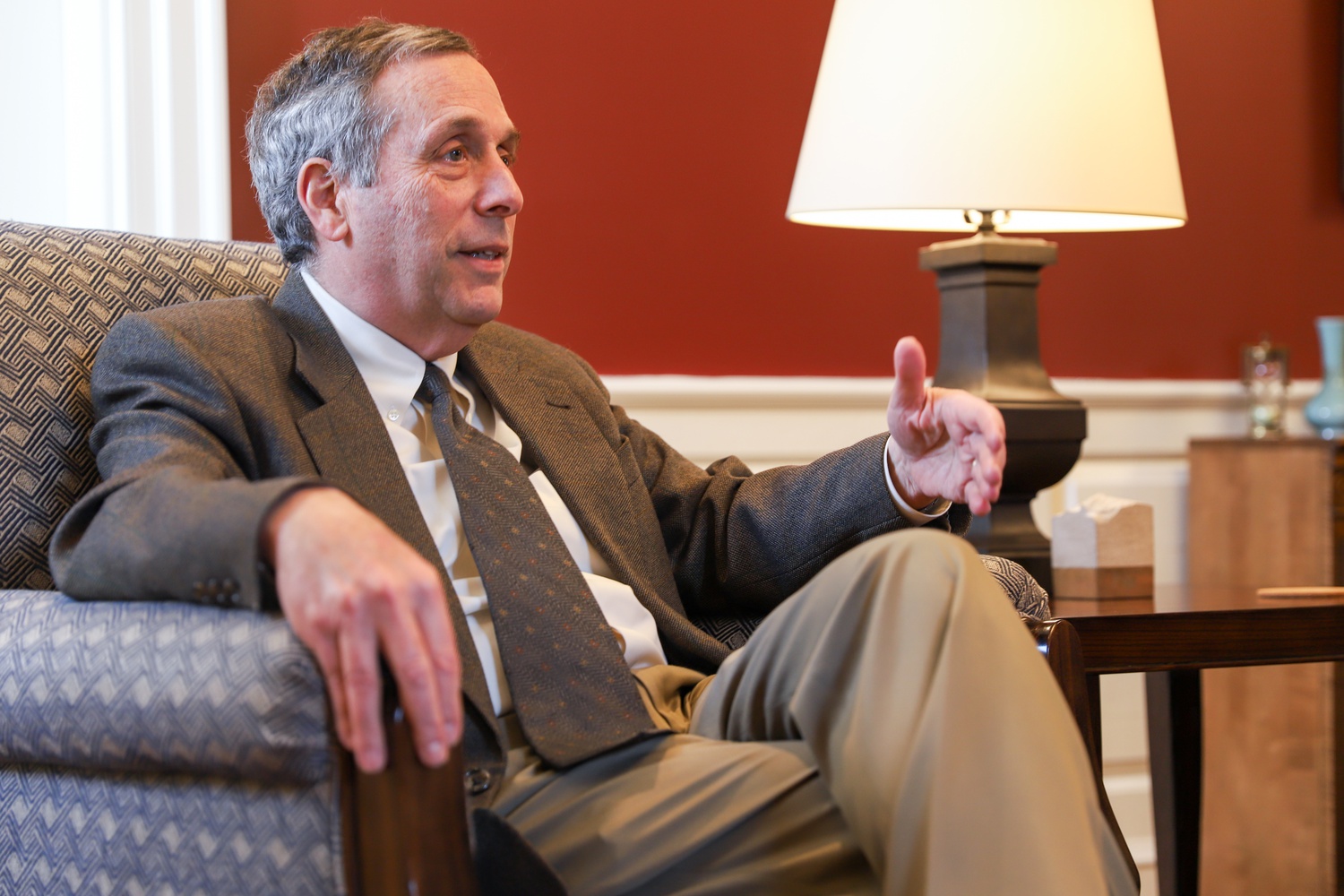 A month after affiliates returned to campus, University President Lawrence S. Bacow lauded the efficacy of Harvard's Covid-19 protocols and the willingness of students, faculty, and staff to follow them. By Ryan N. Gajarawala
By Jasper G. Goodman and Kelsey J. Griffin, Crimson Staff Writers

About a month after Harvard’s campus came back to life, University President Lawrence S. Bacow lauded the efficacy of Harvard’s Covid-19 protocols and the willingness of students, faculty, and staff to follow them.

Despite an initial spike in cases on campus, Bacow said in an interview Tuesday he was “very pleased” with adherence to indoor mask requirements, noting the University has avoided any severe outbreaks.

“We will always have some level of infection on campus, unfortunately, until this virus disappears completely, but we’re managing to keep it under control right now,” he said.

During the week of Aug. 29, 135 Harvard affiliates tested positive for the virus, including 95 undergraduates. Bacow said the University had anticipated a spike in cases with students returning from around the globe.

“We knew that we had people who were returning to campus who had not been through the same kind of strict testing regimen as they would encounter when they were here,” he said. “So there were people who actually came back infected.”

The school increased the mandatory testing cadence for residents of undergraduate housing on campus on Sept. 2, hiking the requirement from weekly to three times per week. Bacow said the shift was driven primarily by rising cases at peer institutions, such as Duke and Cornell. Still, he defended the decision to start the term with a lower testing cadence.

“We’re trying to always find what represents the right point to land, where we’re not being too intrusive in terms of what we’re asking people to do but where the benefits are worth the costs,” Bacow said. “When we started out, we thought that we were in the right spot.”

“It was less the increase of cases on our campus, which was still quite modest compared to what other campuses saw,” he added.

Bacow noted the University has shifted to relying on its own Covid-19 testing facility, which he said has reduced costs given the high number of tests.

Case rates on campus have dropped off since the first weeks, with a 0.16 percent overall campus positivity rate during the last seven days. Harvard University Health Services Executive Director Giang T. Nguyen said the University has yet to identify any Covid-19 transmission in a classroom setting.

Bacow also said in the Tuesday interview that the University is planning to hold in-person Commencement Exercises for the Class of 2022 this spring.

“We’re proceeding under the assumption that it will be in-person,” he said.

The school has also pledged to hold ceremonies for the Classes of 2020 and 2021, which each received a virtual graduation ceremony due to the pandemic. Bacow reiterated that promise Tuesday, saying that Harvard is planning to hold them in the spring. He declined to provide further details, but said he hoped to make a formal announcement this semester.

“We want to make sure that when we announce the date, we are prepared to answer all of the questions which will inevitably follow,” Bacow said. “People are working feverishly right now trying to put those plans in place.”