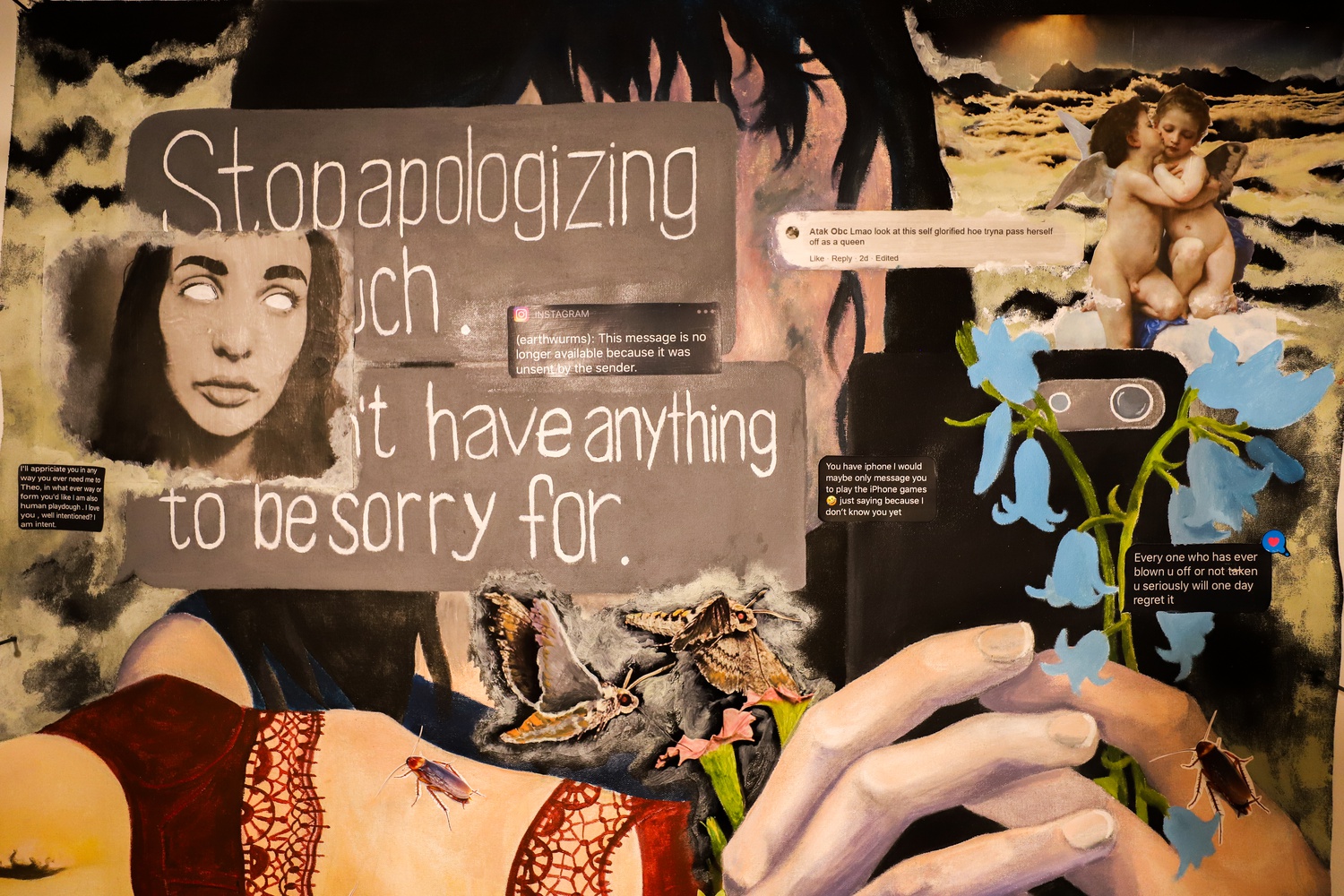 The Boston LGBTQIA+ Artist Alliance, a volunteer artist-run organization, is displaying works by local queer artists at the Distillery Gallery in South Boston until late July.

The showcase, titled “some assembly required,” opened to the public earlier this month, and features pieces of various mediums by 30 queer artists from the Greater Boston area.

Ena Kantardžić, one of the show’s curators, said the collection was organized following an open call for art submissions last year, as part of a larger effort to “revitalize” BLAA.

“It’s been in the works for a while,” Kantardžić said. “BLAA is an organization that was kind of quiet after 2019, and it felt like such a loss to the community, so a small-ish group of us came together and tried to breathe life into it.”

Jasper A. Sanchez, the show’s other curator, said the exhibition presents diverse media, from collages and sculptures to paintings and photography, related to themes including the situational aspects of memory and queer identity.

“Because of this past pandemic and a lot of us spending time in home and sort of ruminating on space and place, there are these explorations of memory and queerness in relation to things like public or private, indoor or outdoor, and also binaries like masculine and feminine,” Sanchez said.

“It’s definitely hard to separate the artists from the art,” Kantardžić said. “A lot of work that is featured in the gallery is regarding the self.”

In addition to their curatorial role, Kantardžić is showcased as an artist with their assemblage “Untitled Poem (information as non-duration),” which imagines a future in which computer sciences are integral to art-making.

Adjacent to Kantardžić’s piece in the gallery space is a projection of Anukriti Kaushik’s digital animation “death of a woman.” Kaushik, a recent college graduate who was classmates with Kantardžić, said the short film challenges conventional notions of womanhood.

“It’s kind of like reclaiming agency over my own body, over my own gender, over my own sexuality,” Kaushik said. “I’ve realized that a lot of people relate to it and I’ve received so much positive feedback.” 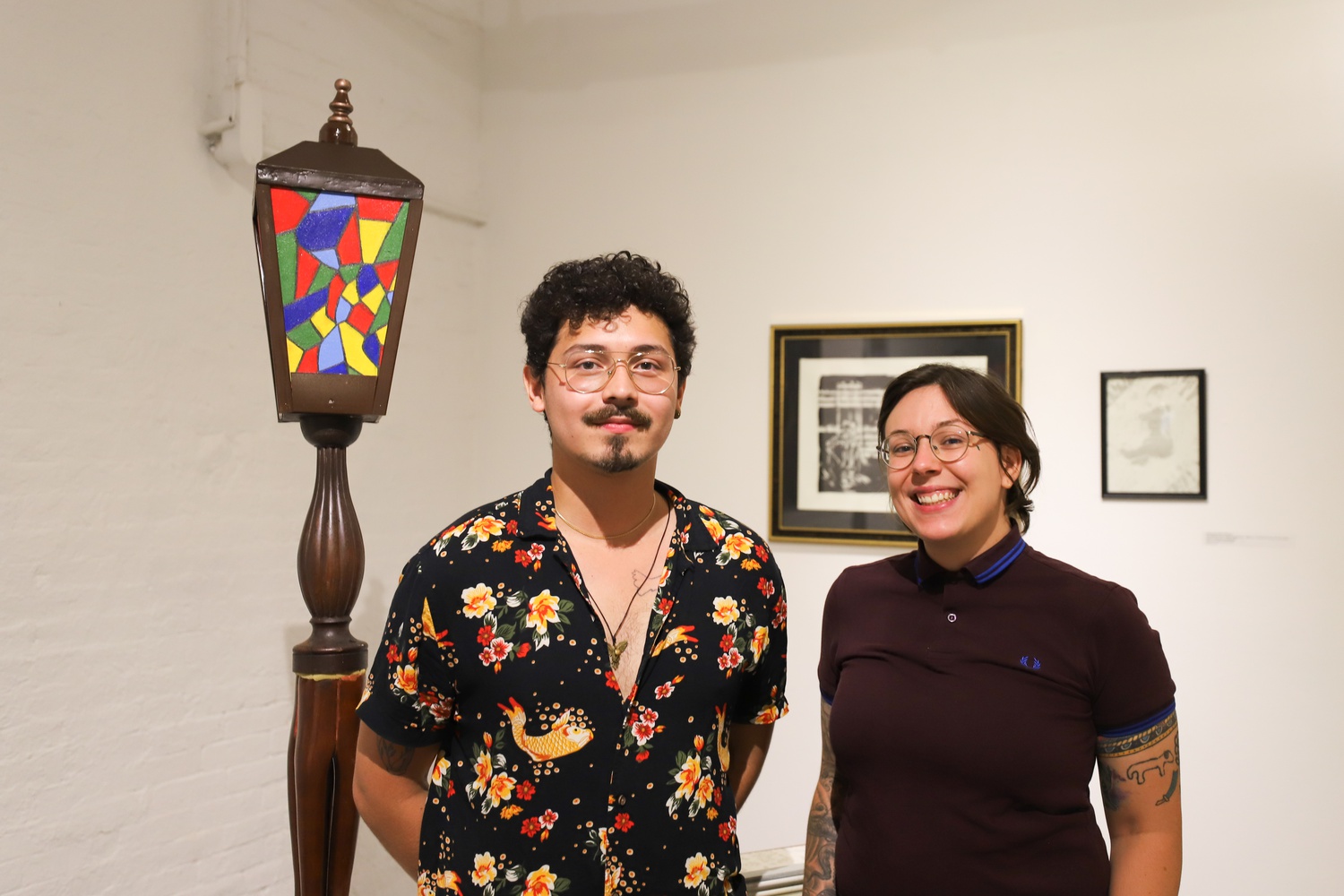 Kaushik, who grew up in India, said the subject of their other work on view, the mixed media painting “Godhood,” was influenced by their spiritual upbringing at home.

“It was inspired by a lot of the gods and goddesses that I grew up with because I come from a fairly religious family, so I was always exposed to Hinduism,” Kaushik said. “It was like an experiment to see if I could create my own goddess and create an inspiration for myself, and make it as large as I possibly could.”

In the same room as Kaushik’s painting stands Mia Fabrizio’s “There Is A Light That Never Goes Out.” Fabrizio said her sculpture references the “fluidity” of gender roles within her Italian-American family’s multigenerational home, which also houses the family-run hair salon her grandfather built decades ago.

“Cultural residue is met by the individual spirit, and we just don’t fit into one box or one label,” she said. “We ascribe our self-identities to many things.”

Walker said “Tiger Beat July 2004,” which portrays a cover of the teen fan magazine, was inspired by celebrities and musicians who were “so open to expressing their feminine side” during the early 2000s. His second piece, “Toni Collette as Annie Graham in Hereditary,” depicts an image of the actress’s performance in the 2018 horror film that he found captivating.

“I think a lot of queer men especially are drawn to these troubled women characters,” Walker said of the Collette portrait. “I couldn’t get that image out of my mind.”

Walker said he was introduced to embroidery as a child because both his mother and grandmother practiced the craft. He said a “strong, feminine part” of his identity was drawn to the art form.

“It definitely feels like a way of communicating softness and femininity, and also a familiar, nostalgic element,” Walker said. “There is also a little humor and irony in something you might associate with old-fashioned grandma and then infusing that with millennial, even Gen Z, pop culture references.”

Outside the gallery space, BLAA has sought to unite the show’s artists by providing mentorship and other support for participants who are in the early stages of their careers, according to Sanchez. Kantardžić said the organization recently hosted an in-person meet-up for the artists.

“That was the goal of the show,” Kantardžić said. “The intention that BLAA had was to bring these people together.” 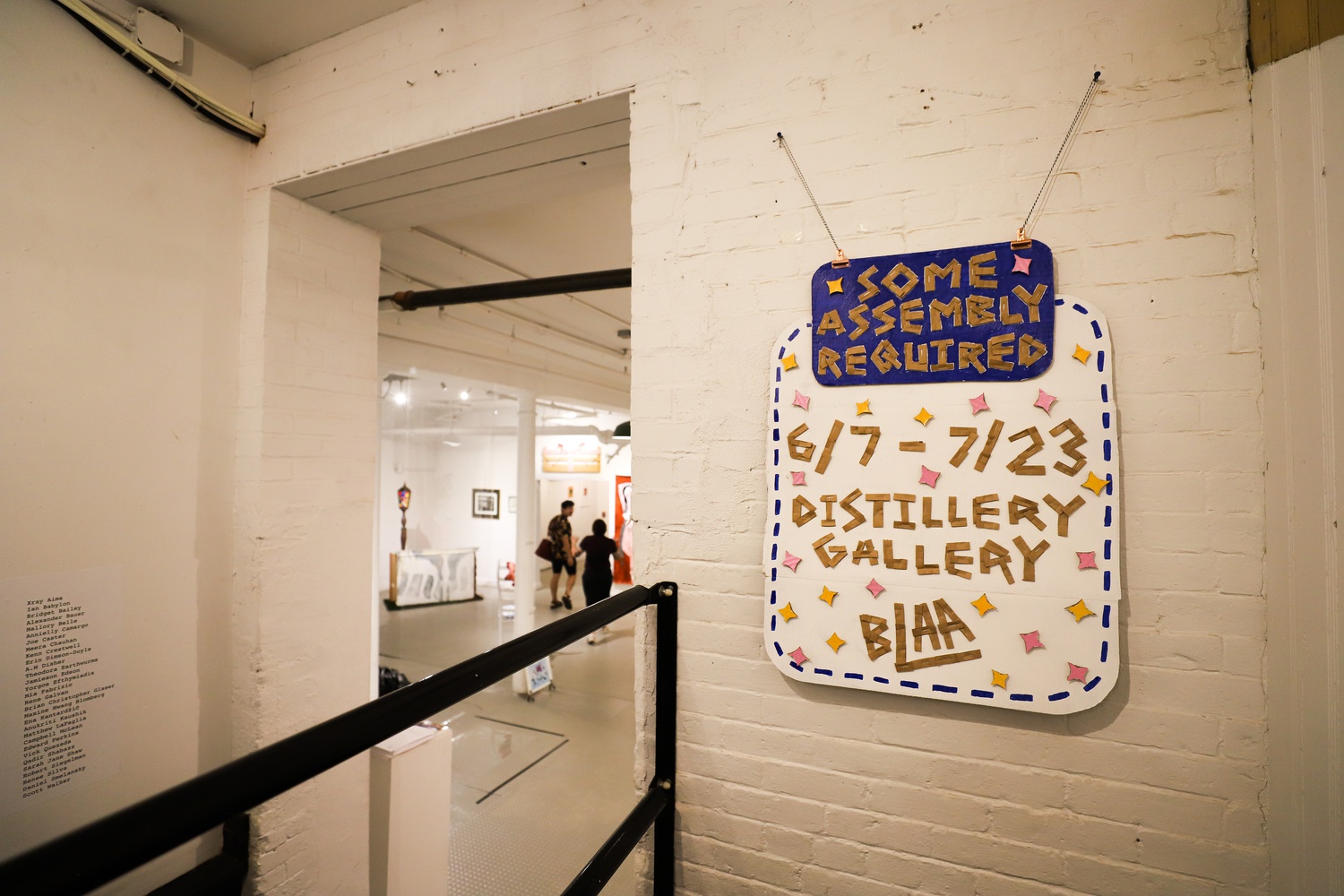 Kaushik said it was “beautiful” to interact with a diverse group of artmakers after a year of social isolation.

“The experience has been incredibly heartwarming, especially coming right out of the pandemic,” they said.

Above all, Fabrizio said she was heartened that the exhibition elevates each artist’s unique perspective.

“That was the most exciting part — that everyone was being seen, and voices and expression was being valued,” she said.

BLAA’s “some assembly required” remains on view at the Distillery Gallery through July 23.