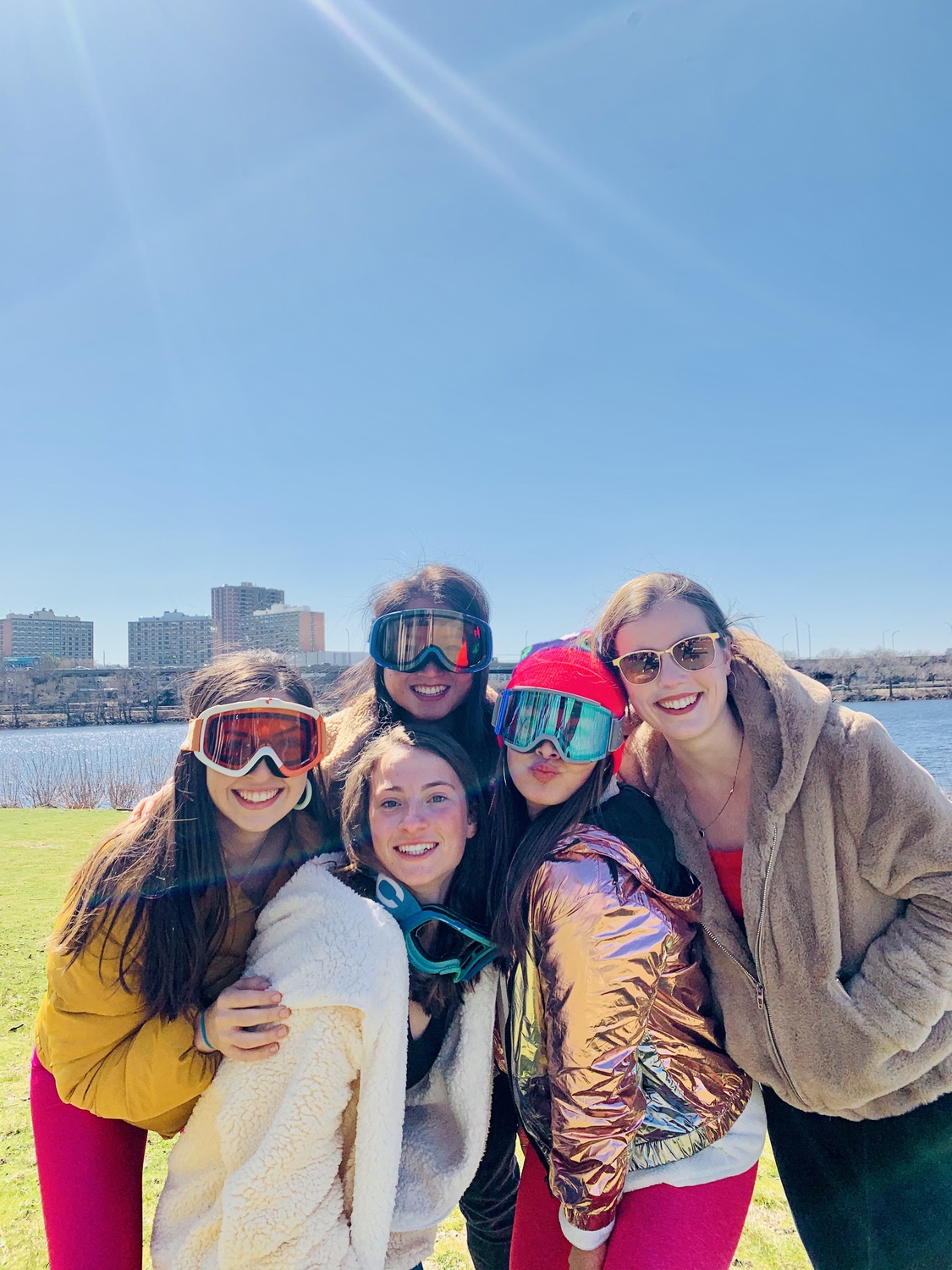 The Final Months of a Covid-Plagued Senior Year

I expected the first part of her answer. The point of this article was to chronicle a senior blocking group’s spoiled final year at Harvard. But what I found in my reporting was slightly more complicated.
By Vera E. Petrovic

My first interview with Olivia M. Price ’21 is on a Saturday morning in late March. She’s two months away from a virtual graduation that feels like a “deflated balloon,” but she wonders whether that’s entirely a bad thing. “I would say the senior class as a whole has maybe come together, because this will always be something we share,” Price says, “having our senior year not how we imagined it.”

I expected the first part of her answer. The point of the article was to chronicle a senior blocking group’s spoiled final year at Harvard. But what I found in my reporting was slightly more complicated.

I call all the girls on a Friday afternoon in early April. For a moment it’s just me on the Zoom, until another box pops up and I see five figures squashed together on a single window. Price is on the left, dressed in business casual for an interview she has later that day. Nellie F. Ide ’21-22 and Sophie M. Sun ’21 perch on top of a sofa with Julia R. Friedman ’21 between them. To their right, Ciara E. Duggan ’21 smiles in a sweatshirt that spells out “MATHER” in the Friends font.

By this point, I’ve already interviewed all of the girls separately, but it’s different to see them together. They’ve each spoken about how living off-campus during their senior year has made them closer, but I don’t realize how close until I witness them shoulder-to-shoulder, completely at ease with one another.

“Sophie and I were freshman year roommates in Wigg,” Duggan begins. “We ended up blocking with a group of people that included Julia and Nellie.” The group was placed in Mather House, where they met Price and lived until March of last year. When Harvard announced that most students would be remote for the fall semester, the girls scrambled to find off-campus housing in Cambridge.

“Before I even knew I wanted to take classes, I knew I wanted to be in Cambridge,” Friedman says. “Pretty quickly we realized that a lot of us wanted to be here, so we started looking for houses.” The group found a rental in Central Square 10 minutes from campus, and they’ve lived there since September. Despite the disappointment of a senior year away from Harvard, Price, Ide, Sun, Friedman, and Duggan admit that the experience has been surprisingly positive.

“During the pandemic, you can’t go anywhere. There’s no club activities to go to, no athletic events, no going to class, or to hang out in the dining hall or the library. We were all in our kitchen, or in our living room together, most of the day, every day,” Duggan reflects. “I think inevitably, we got a lot closer through that. I definitely think we have unbreakable bonds after this experience.” She glances back at her roommates and they share a laugh.

“Basically, we’ve been trying to recreate the main events of the year in a Covid-safe way,” Ide adds. The girls launch into the past year’s lineup: a makeshift Harvard-Yale game in their backyard, pumpkin carving, an outdoor “formal” at a rooftop bar, a night when they wore brightly colored wigs in public.

By the end of the group interview, I’ve spent a lot of time smiling and laughing. I’m impressed by the girls’ optimistic outlook. But I have to remember back to our first individual interviews in March, and I realize that for all of the fun they’ve shared, the girls have still struggled to accept some aspects of this unprecedented year. 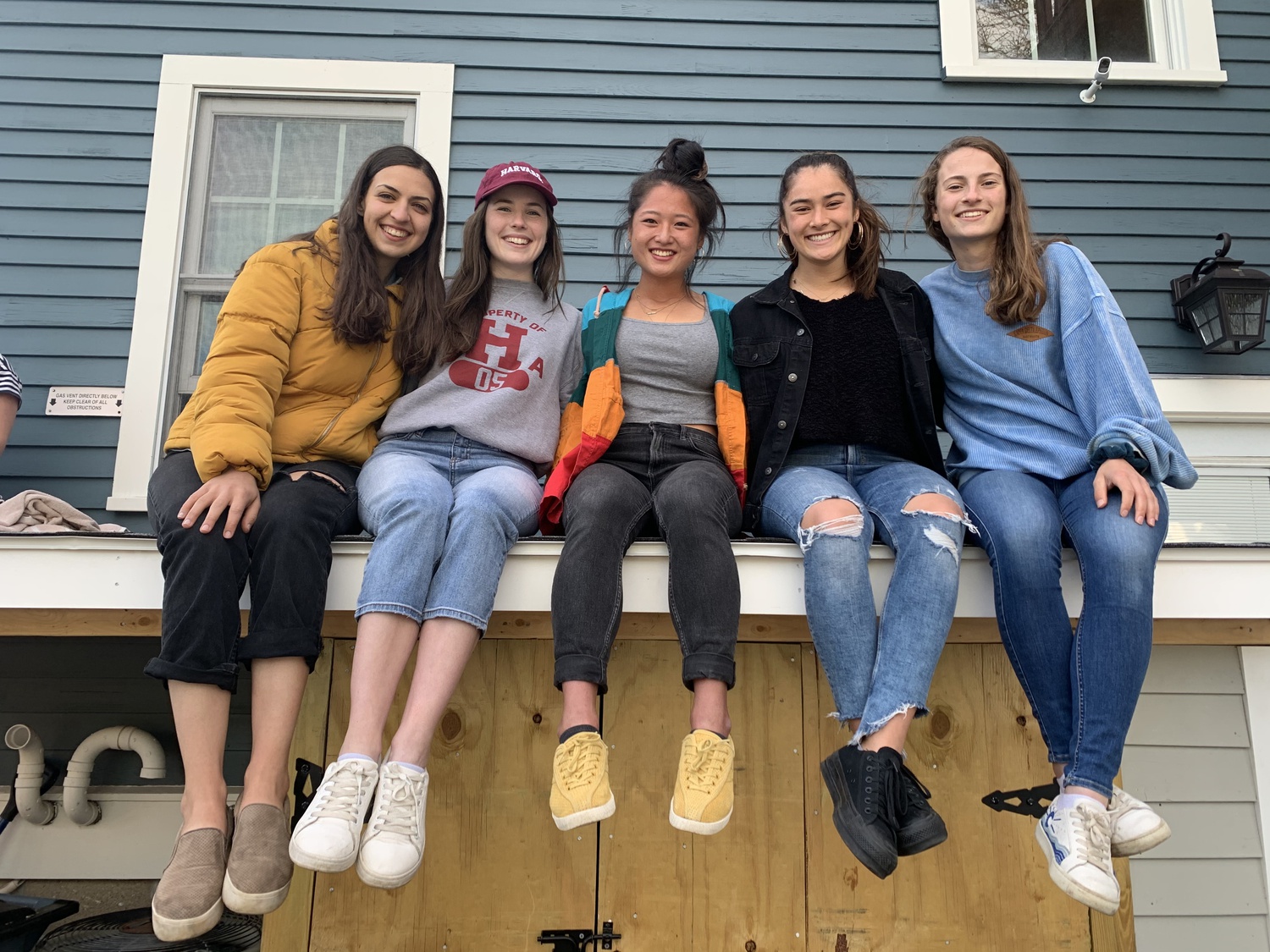 The group at a gathering in Cambridge this April. By Courtesy of Ciara E. Duggan

Olivia, who lost her senior season of water polo, reflects, “I started getting a little nostalgic and sad that I would never be able to play for the Harvard Crimson again.” When I ask her if she ever considered taking time off to retain her athletic eligibility, she flashes a pained smile and says, “my love for water polo is not enough to put my whole life on hold for a year. I’m kind of ready to continue on with my life and graduate with the friends I’ve made here.”

Academics raised additional challenges. Aside from “Zoom fatigue” in classes, Duggan, who was one of three roommates to write a senior thesis, admits, “the whole process was a little bit more challenging being remote.” She points out that in normal years, seniors typically spend January writing their theses together, adding, “It did feel very isolating to come back to my Cambridge house and be alone writing on a computer with no one around.”

Although the girls were only a few miles from campus (and still managed to see many of their classmates and friends regularly), several noted a distinct shift in their sense of connection to the college. “I don’t feel as connected to Harvard,” Friedman remarks. “It’s been an awesome year living with friends, not an awesome year going to Harvard. I think a lot of what makes Harvard so special is the housing system and the dining halls and walking through the Yard, and now [we] don’t have any of that.”

Despite many setbacks, the girls maintain that they are enjoying their senior semester. Sun, in particular, insists that the past year has been one of the best of her life.

“I’ve just realized that you can make the best out of any situation if you’re with friends,” she says. “I took a class taught by [Professor] Ellen Langer, about positive psychology. Something I’ve taken away from that class is that whenever something happens that you don’t like, or that makes you sad,” she continues, “just think to yourself, ‘Is it a tragedy or an inconvenience?’ 99 percent of the time, it’s an inconvenience, and I’ve carried that phrase with me.”

I had expected them to feel completely cheated out of a fun and memorable senior year. Maybe it was my own baggage, that I’d come to Harvard as a nervous first-year and been sent home just as I began to find my footing. In my limited college experience, had I assumed that a physical campus was the most important factor in feeling part of a community?

Eventually, I decide to ask about the interview process itself: What did it feel like to reflect on this past year, and were there any surprises in what came out?

Price, who had not lived with the other girls in years prior, answers, “I knew I was going to tell you that this was an amazing experience, but I didn’t expect to dive so deeply into the fact that they had all lived together before, [yet] they never made me feel like I wasn’t part of their group. Now, these are the people that are going to be some of my best friends five years from now when I talk about my college friends.”

Sun echoes a similarly positive outlook on the year, but she adds that she has already spent a good amount of time reflecting with her friends and classmates. “There’s always that question when you catch up with people, like, ‘How’s your year been during Covid?’ and ‘Oh, I’m sorry this has been your senior year.’ But I’m like, no, no, don’t be sorry, this has literally been one of the best years of my life. So I think I’ve already done that reflection.”

Given everything they know now, what advice would the girls have given themselves a year ago?

“I would just tell myself that things will work out and be fine, just to stress less,” Duggan offers.

Ide, who is the only roommate taking the year off, agrees. “Last March, when we realized we wouldn’t be coming back to campus, I was like, ‘Why did I choose so many times to study an extra hour rather than doing some fun adventure with friends?’” She notes, “I think this has just given me a little more perspective to understand how I can maximize my remaining year in college.”

Price would tell herself to be grateful for the experiences she’s had at Harvard, but also to “be ready to move on and turn to another chapter.”

“I have an all-in attitude about everything that’s gonna go on in the next month,” Friedman states. “Whenever anyone mentions doing anything, I kind of just want to say yes, like if it’s going to play volleyball on the river” or heading to “an all-you-can-eat sushi lunch.” She says, “I’m realizing that it’s my last chance to do a lot of things around campus and be around a lot of people, and that if I don’t take advantage of that now, I’ll miss my opportunity forever.”

But something tells me that Friedman won’t miss that opportunity. I don’t think any of the girls will, because in the past month I’ve gotten to know them, they’ve taught me a lot about what it means to make the best of a seemingly unfortunate situation. I had naively imagined that all seniors would mourn a year “lost,” but as Sun puts it, her Harvard experience is “this group of people.” Olivia, Nellie, Sophie, Julia, and Ciara. A group of people that she can hold onto for much longer than four years.

— Staff writer Vera E. Petrovic can be reached at vera.petrovic@thecrimson.com.