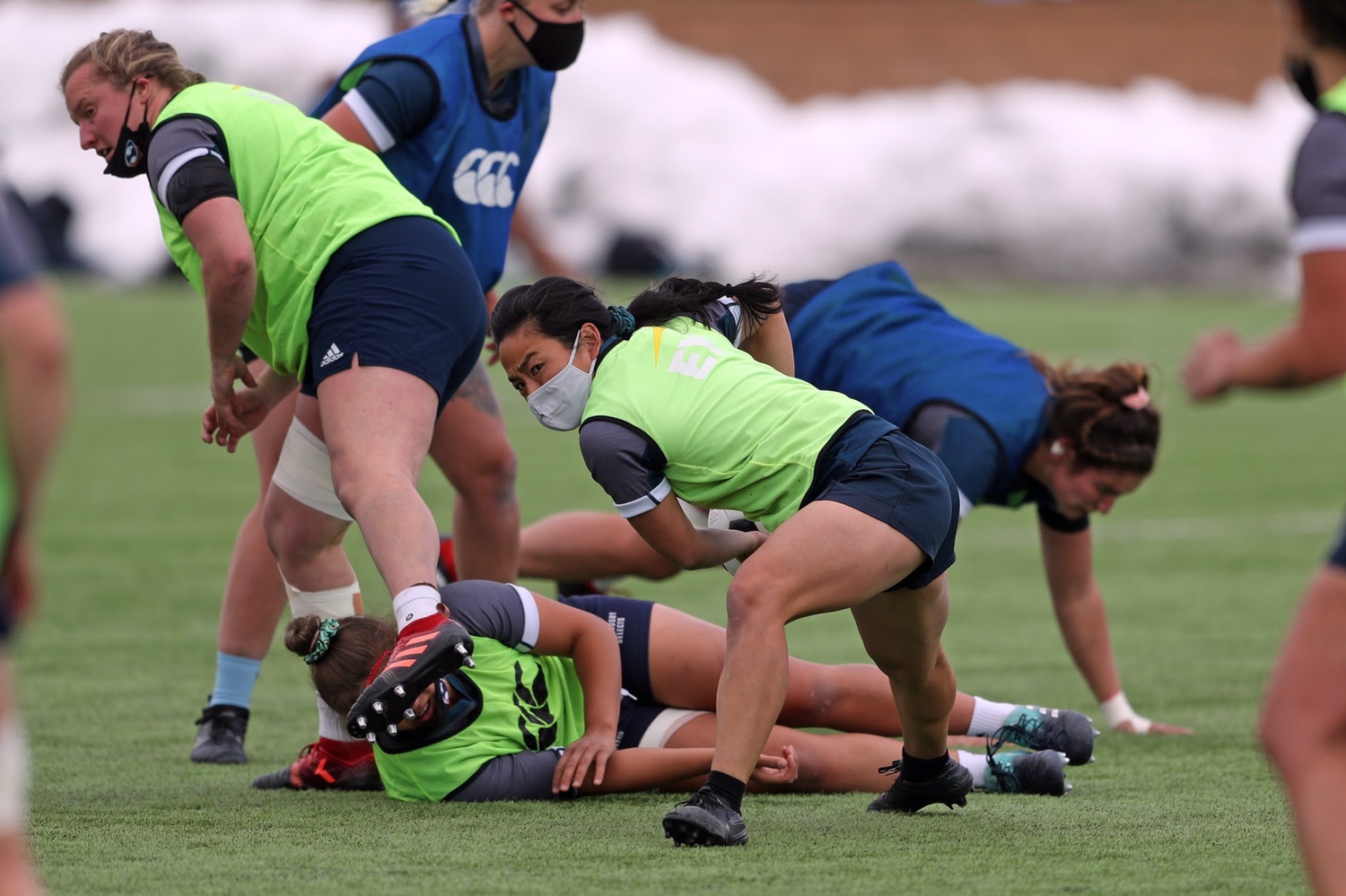 Shelby Lin '14 side-lunges in a warm-up session with USA Rugby. Covid-19 safety protocols, such as mask-wearing on the field, are in full effect. By Courtesy of Travis Prior
By Derek Schaedig, Contributing Writer

Happening just once every four years, the World Cup is the pinnacle event for women’s rugby competitors worldwide. In hopes of being crowned the best in the world, each country selects the best women’s rugby players it has to offer.

In February of 2021, it was announced that five women’s rugby players from Harvard, both current members and alumni, are in a pool of 51 players in contention to make the World Cup 15s roster, which will eventually be whittled down to around 30 athletes.

The next edition of the World Cup is going to be in New Zealand. It was scheduled to take place in the fall of 2021.

However, Covid-19 had other ideas.

Postponed for over a year from now, in the fall of 2022, New Zealand will resume its role as host of the World Cup. Hoping to be included on the coveted final U.S. roster are current and former Harvard rugby standouts Shelby Lin ’14, Maya Learned ’18, Jenny Kronish ’19, Erica Jarrell ’21, and Cassidy Bargell ’22.

Rugby is a relatively new sport to the U.S. and to Harvard as well. In fact, in 1982, women’s rugby, then under the Radcliffe College name, was founded at Harvard. The Crimson squad eventually graduated to varsity status in the 2013-14 season. Lin ’14 was a senior at Harvard when the shift took place and is now one of the leading contenders to make the final USA roster.

Lin grew up as a competitive soccer player up until the end of high school. She was then faced with a difficult choice: become a Division III soccer player or attend Harvard, but not as a member of the varsity soccer program. Ultimately, she chose Harvard.

Left with an incredible athletic drive and no team to play on, Lin sought out a new athletic program to throw herself into. She had heard about rugby before, and she was intrigued.

The scrum-half began her rugby career as a first-year, and by the end of it, her team had won the Division II National Club Championship. Needless to say, she was hooked.

The transition from soccer to rugby that Lin made is not a foreign one to Kronish ’19 either. Also from New York State, Kronish was recruited to Harvard as a soccer player. Upon falling ill after her first year right after the soccer preseason ended, Kronish, who had been playing soccer from an early age, soon came to realize that her athletic passions had begun to shift. Just like Lin, Kronish found rugby and made the squad as a walk-on. 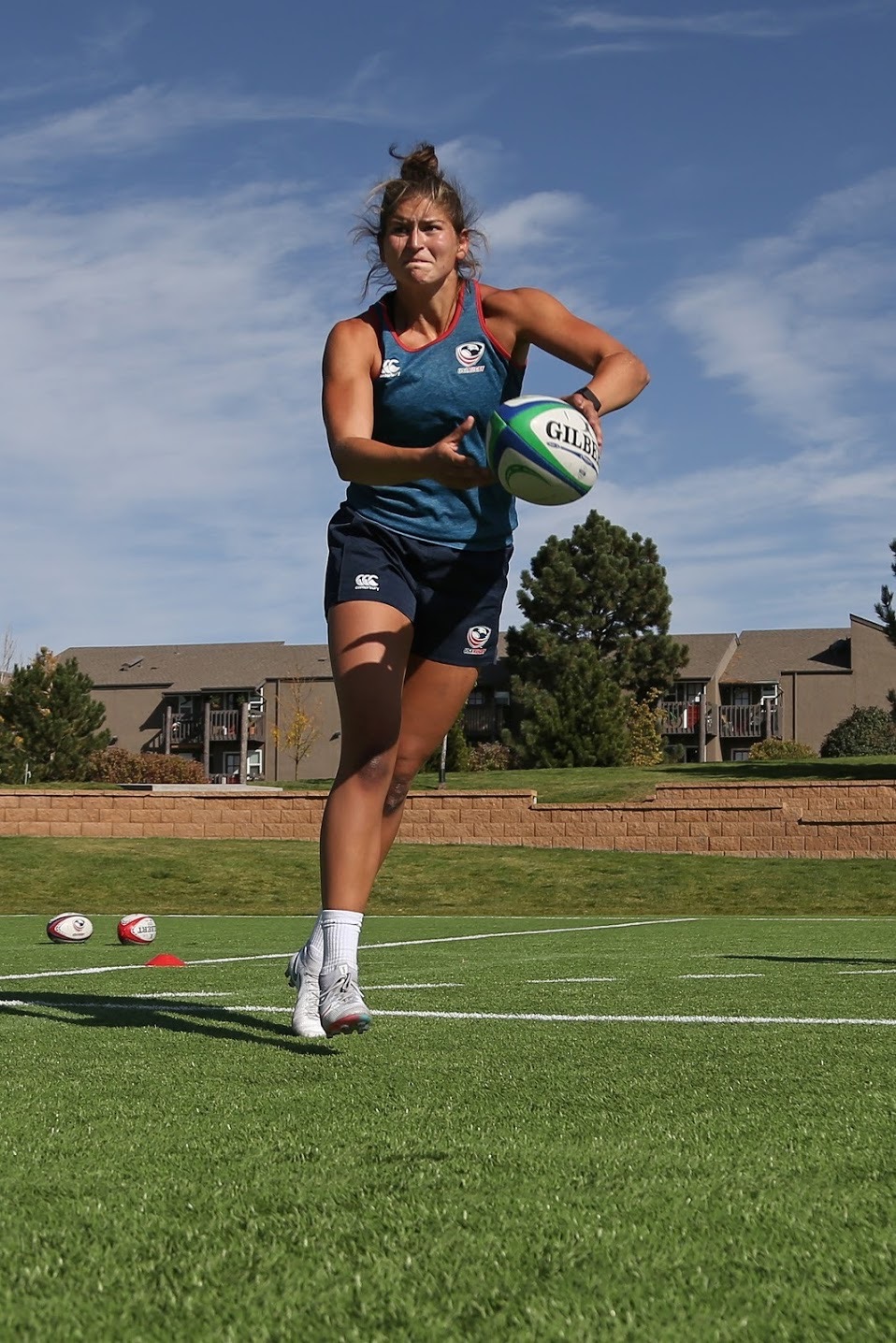 Jenny Kronish '19 loads up for a toss in a practice session. By Courtesy of Jenny Kronish

The former Kirkland House member noted that the transition was easier than she expected. Not only had she played a varsity sport for a year before she transitioned to rugby, but she also had some great teammates in the rugby program to come to.

“Everyone was super welcoming,” Kronish said. “The fact that you can come in as a walk-on and immediately make an impact is pretty special.”

Being a walk-on and rising through the ranks is something that current Harvard women’s rugby co-captain Erica Jarrell ’21 knows all too well. After growing up as a rising equestrian star, Jarrell too was left without a sport when she got to Harvard.

Growing up with a Division I wrestler for a brother, Jarrell was raised playing baseball and roughhousing with her brother. Once the Lincoln, Mass., native got on campus, she received an email from a rugby recruiter entitled, “Are you a badass?”

If you have had any interaction with Jarrell before, then you know the answer to that question is yes. Jarrell went to the recruitment meeting, saw the physicality of the sport, and fell in love. 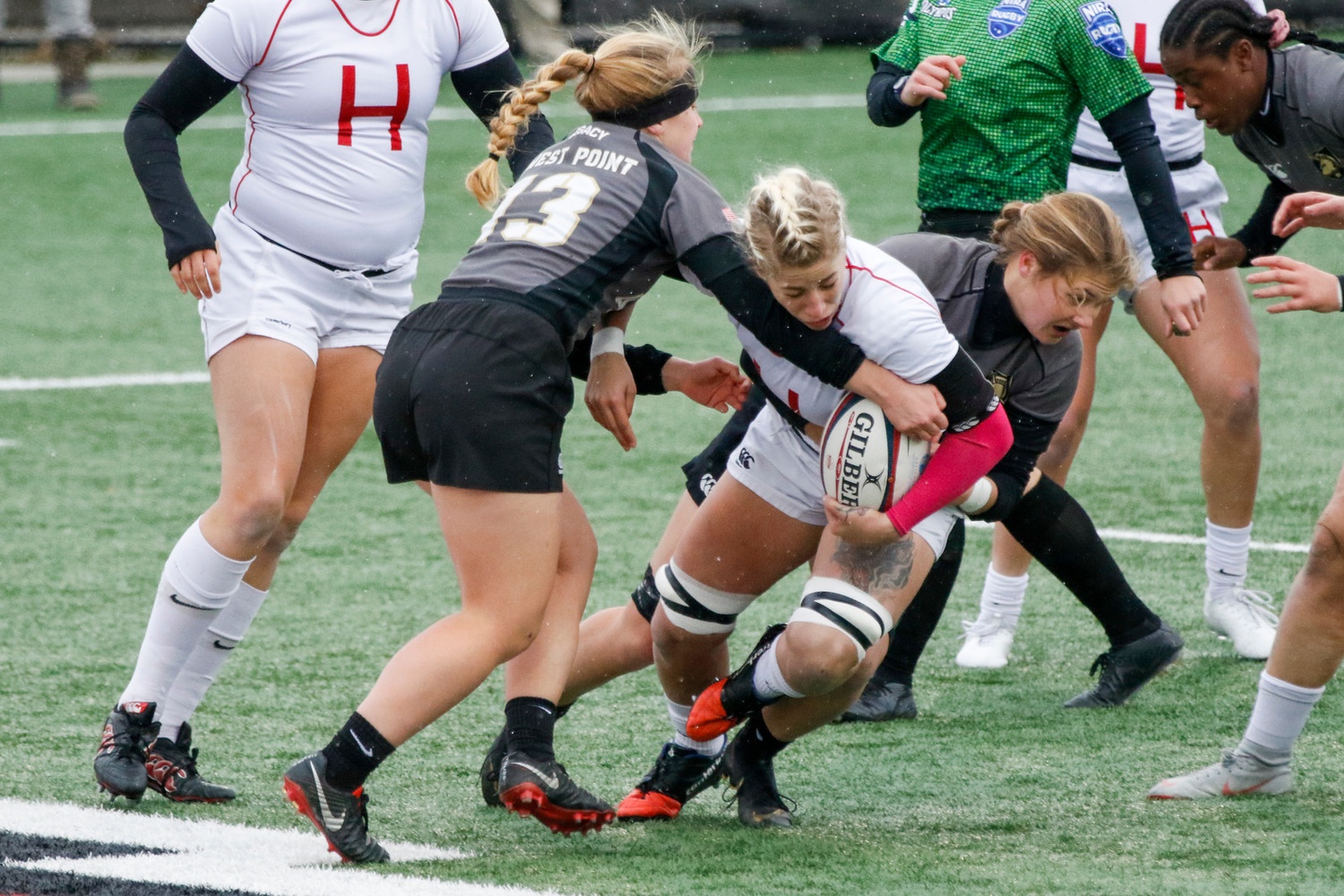 WOMEN OF MANY TALENTS

Although all five rugby stars excel on the field, they have found a way to be successful in many ways off the field as well.

After graduating in just three academic years studying applied math, Lin went on to become employed at world-renowned Mckinsey & Company while pursuing her rugby dreams. The East Setauket, N.Y., native also joined the Berkeley All Blues, a member of the WPL.

And Lin is not the only one with an impressive off-the-field resume. Bargell, an integrative biology concentrator with a secondary in government, has been working on a project with a Harvard professor focused on analyzing voter segregation in different areas in the U.S.

A concentrator in molecular and chemical biology with a secondary in psychology, Jarrell is currently conducting research for her thesis and, on top of playing rugby with some of the best in the world, is planning to attend medical school.

A medical scribe before Covid-19 hit, Learned ’18, also a player in the WPL, is planning on becoming a doctor one day herself as well.

Being one of the most prominent women's rugby players in the U.S. does not come without its challenges. These elite athletes have to make large sacrifices in order to continue to play the sport they love at the highest level possible.

Learned turned down three job offers in order to be available to play in the World Cup in 2021. That is until it got postponed until 2022.

The theme of making sacrifices for the sport they love is not unique to Learned. Jarell took a semester off of school in order to train, to be able to participate in the required camps before the World Cup, and to be ready if she were to have made the final roster for the original World Cup date of fall of 2021.

In the spring, all five current and former Harvard women’s rugby players attended a Daily Training Environment training camp in order to participate in intense training and to be further evaluated. All five competitors moved to Denver, Colo., for seven weeks and fought for a spot on the World Cup roster, leaving behind family and friends, school, and sometimes jobs.

MAKING THE BEST OF A TOUGH SITUATION

Covid-19 has impacted many realms of life, and elite women’s rugby was not spared. Besides the postponement of the World Cup, leaving many of these phenomenal athletes without day jobs, these rugby stars have had to get creative in their training strategies as well.

In the DTEs, there was an entry process the athletes had to go through in order to enter the training bubble. Once they got in, the rugby standouts had to wear masks in the gym and train in pods of eight in the fall and in pods of 16 in the spring in order to protect the group from potential outbreaks. This was followed by a barrage of Covid-19 tests and extensive workout equipment cleaning after usage.

The adjustments in their training due to Covid-19 did not stop there. Without a formal match to play in or a team to be on, many of the athletes were left to their own creativity to find a way to train. A lot of them found rugby players in the area to train with, run with, and even work out in garage gyms with.

In fact, for the young phenoms and current Harvard co-captains Jarrell and Bargell, Covid-19 has even had some surprising benefits. Bargell took online classes this year, which gave her the ability to train in the DTEs in both the fall and spring, potentially giving her a better chance of making the final World Cup roster for Team USA. 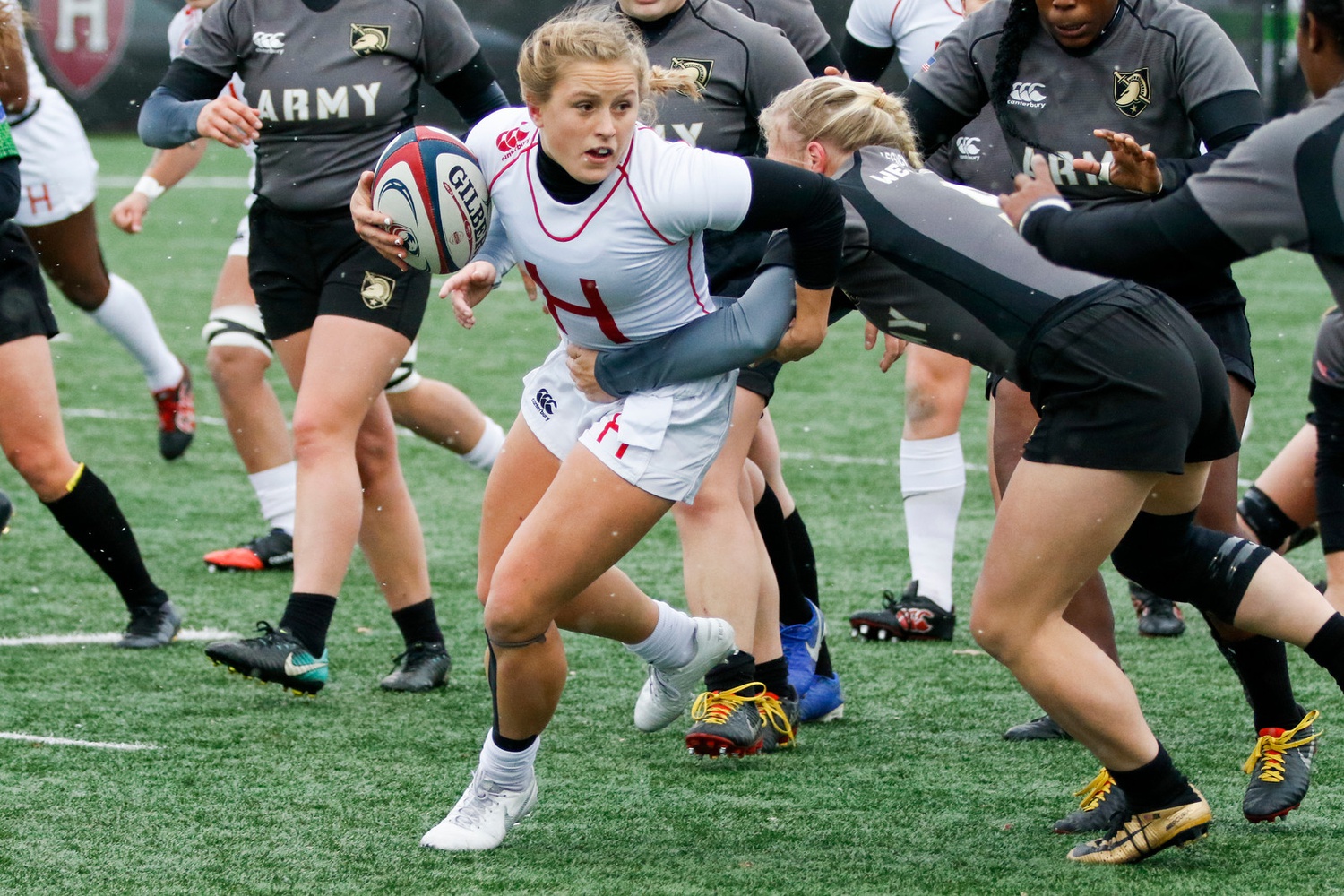 Jarrell pointed out that she has excelled in the tryout camps because she was physically fitter than her competitors who may have struggled in finding ways to train.

“I really took this time, in a rugby sense, to go back to basics and clean up some stuff that I didn’t have time to fix because I was busy training for the next game,” Jarrell said.

IT’S BIGGER THAN THEM

For many of these rugby standouts who have dedicated so much time and energy to the sport they love, making the final World Cup roster for Team USA would mean so much more than just another accomplishment in their already impressive rugby careers.

“It’s become bigger than my own experience with 80 minutes a time on the field,” Jarrell said. “The World Cup would be my carrying all of these people that I’ve connected to because of the sport with me.”

“I feel like I’ve had a lot of people in my corner,” Kronish said. “It would be a privilege to represent myself and all of them in the USA jersey.”

But even more so than representing themselves and those who have helped them along the way, these five amazing athletes will be representing Harvard, an emerging powerhouse in the rugby world thanks largely to these individuals.

“Harvard kind of snuck up on everyone,” Kronish said. “I believe that all of us are really dedicated to improving ourselves for the betterment of the team and finding ways to learn and improve on and off the field to help the team, which were definitely values that were instilled at Harvard.”

“It [Harvard’s five representatives currently in the running for the final World Cup roster] speaks a lot to the program we’ve built,” Learned added.

A program that began its varsity athletic status with Lin in 2013-14, who may soon suit up with Harvard’s rising stars, appears to be bound for future excellence.