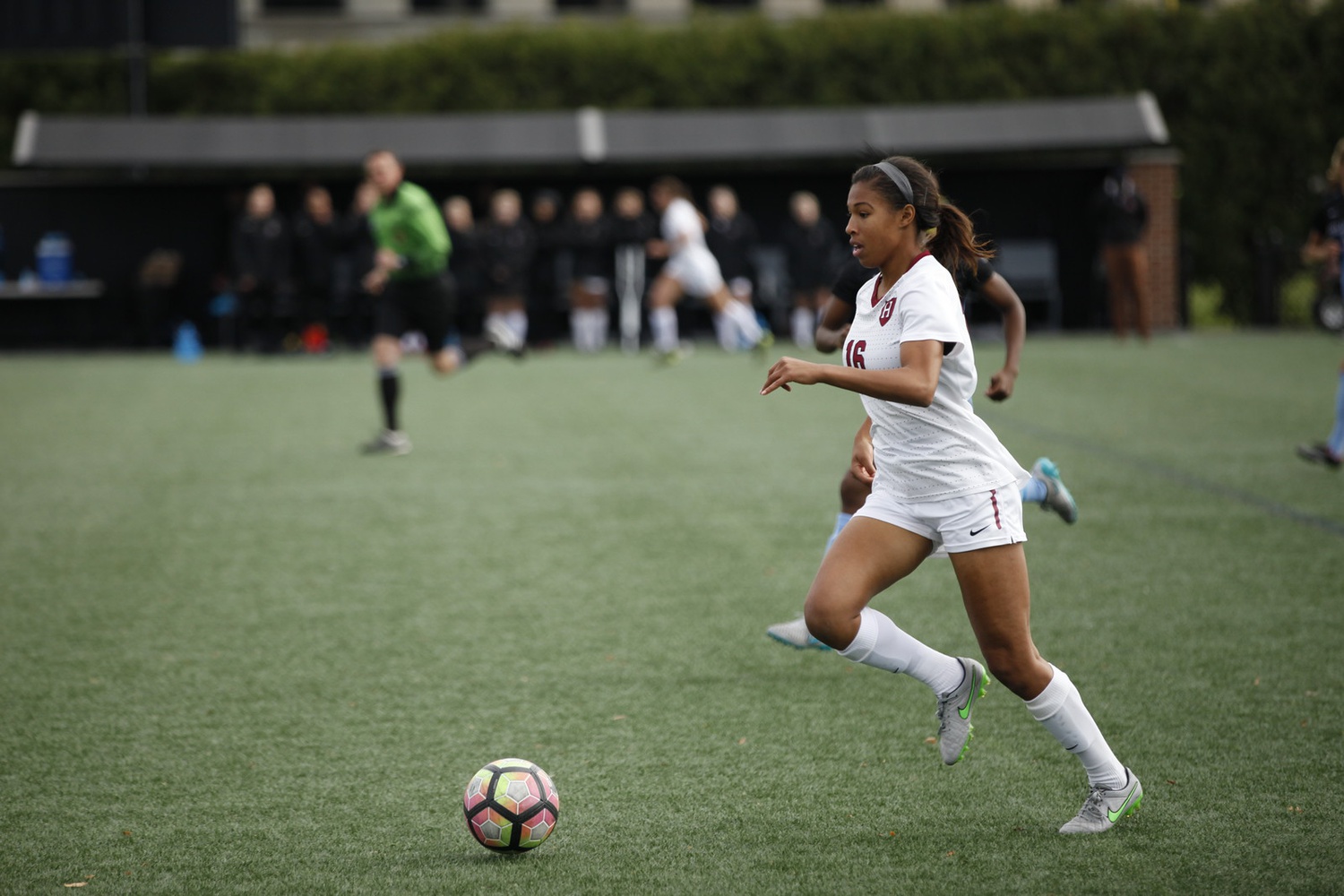 Midge Purce '17 races through the defense, looking to score one of her 42 career goals for the Crimson. By Timothy R. O'Meara
By A.J. Dilts, Crimson Staff Writer

For Margaret “Midge” Purce '17, scoring 42 goals in her four seasons with the Harvard women's soccer program was not enough. As she competes in her fifth professional soccer season, fulfills her first term on the Harvard Board of Overseers, and prepares for the 2021 Tokyo Olympics as a member of the United States Women's National Team, Purce continues to set and achieve new goals on and off the field.

Even before enrolling at Harvard as a first-year in 2013, Purce prioritized both academic and athletic opportunities in her recruiting process. In high school, she starred as a member of the U.S. Soccer Under-17 Women's National Team and won Gatorade Girls Soccer Player of the Year in her home state of Maryland. While her incredible speed and quickness on the pitch opened the door for a chance to play at perennial contenders for the NCAA national championship, Purce's passion for academics led her to choose the Crimson for her collegiate career.

After joining a Harvard women's soccer program that had finished just fourth-place in the Ivy League in 2012, Purce's dynamic rookie season energized and improved the team in 2013. She led the Crimson to a 12-4-2 overall record, including an undefeated record in conference play. Purce's remarkable first year earned her Ivy League Rookie of the Year and Ivy League Player of the Year, becoming the first women's soccer player in Ivy League history to win both awards in the same season.

“What made her so unique, it wasn't just about her, it was about what she could bring to the team and how she could help us achieve our goals," said Harvard women's soccer head coach Chris Hamblin. “She was a forward by nature, a goal-scorer. And there were teams that designed systems to stop her. So we moved her around, and she was comfortable with that, knowing it was what's best for the team.”

As Purce progressed through her four seasons at Harvard, her fierce work ethic and drive to improve her skills never wavered. She worked tirelessly to improve her crossing, finishing, ball control in tight spaces, and other technical aspects of her game.

In addition to her development as a player, Midge thrived in her time at Harvard due to her first-class intangible skills, such as personality and leadership. Purce elevated her teammates' play by bringing intensity to each practice, working beyond what the coaching staff had asked, and never hesitating to encourage her teammates to do the same. While she led by example and through verbal communication, it was the fun, light-hearted side of Purce's personality that allowed her and the women's soccer program to be successful.

"It's that balance of intensity and ability to not take life too seriously that I think a lot of high-profile athletes can harness and be able to flip the switch when it's time to go, and then be able to relax and laugh about it afterwards,” Hamblin said. "In regards to leadership […] she was so much fun, so much energy that, if you're having a bad day, it's tough to not enjoy being around her because of the energy she brought every single day."

In Purce's 2016 senior season, her polished ball skills and more consistently elite play earned her yet another Ivy League Player of the Year award and a first-team All-America selection. Through her four seasons at Harvard, Midge and her 2017 classmates led the Crimson to a 22-2-4 Ancient Eight record and won three Ivy League titles.

The development of Midge Purce as a person and player at Harvard was emblematic of the Crimson women's soccer program's core philosophy. Rather than focusing solely on how his student-athletes should improve on the field, Hamblin stresses that important character skills, such as resilience, determination, and empathy, are essential to improving his players' performance and his program's success. When Hamblin ascended to the head coaching position in 2016 — Midge’s last season in Cambridge — he appreciated having such a determined, fun, hard-working senior lead his team in Purce.

"I think there [are] times as a coach where you use sport as a vehicle to really talk about some ways that you can deal with challenge and adversity," Hamblin said. "Sports can provide the adversity and challenge through which people can grow. I know with Midge that during her time in college she did work a lot on becoming better with her consistency mentally and not being frustrated."

After her four years at Harvard, Purce was selected ninth overall by the Boston Breakers in the 2017 National Women's Soccer League draft. In the NWSL, she has spent one season in Boston (2017), two seasons with the Portland Thorns (2018 and 2019), and the last two seasons with the New Jersey/New York Gotham FC (2020 and 2021). Purce enjoyed success at the professional level from the forward position, having recently been named NWSL Player of the Week for the first week of the 2021 season.

From her stellar play in college and the NWSL, Purce earned a call up to the U.S. Women's National Team from head coach Vlatko Andonovski, becoming the first Harvard women’s soccer player to compete for the team. After first appearing in a USWNT match in November 2019, she has been called up five more times and recorded one goal. Purce’s ability to adjust from her traditional, offensive position of forward to the defensive position of right-back speaks to her superb work ethic, character, and talent. The flexibility in Purce’s game has proven critical to her ability to excel at the professional and international levels.

"I think it goes to show the depth of her talent," Hamblin said. "I think what Midge has been working on her whole career is being able to be effective in many different ways. [...] It’s really a tribute to the work that she's put in to develop her game that she can play the highest level at multiple positions."

While Purce has achieved many of her goals on the pitch since graduating from Harvard, her intangible strengths in leadership, personality, and determination have allowed her to flourish outside of soccer as well. In August 2020, Purce was elected to a six-year term on the Harvard Board of Overseers, the second-highest governing board at the university. She has also founded the Black Women’s Player Collective, a nonprofit organization that strives to improve opportunities for Black girls on and off the playing field. In March 2021, Purce was invited to Congress and the White House to speak with teammate Megan Rapinoe about equal pay for women.

“She's been able to use her success as an athlete as a platform for so many important causes,” Hamblin said. “She's able to navigate difficult questions and put herself in a position where she can represent the league, the sport, and Harvard in such a meaningful way."

Even as she meets the President and First Lady, inspires a generation of young soccer players, and dons her country’s letters across her uniform, Purce remains closely connected to the institution that once cultivated her talent, harnessed her drive, and provided opportunities for her to set and accomplish her goals. She regularly helps lead Harvard women’s soccer camps, visits campus, and stays in close contact with Coach Hamblin.

“I joked with her after she was in the White House, 'Hey, 30 years' time, Midge, get yourself ready because you may be back there,’” Hamblin said. “With Midge Purce, you legitimately may have gone to school with the next president. She's going to make a difference in our world, there's no doubt about it. I am really proud of her and privileged to continue to support her."