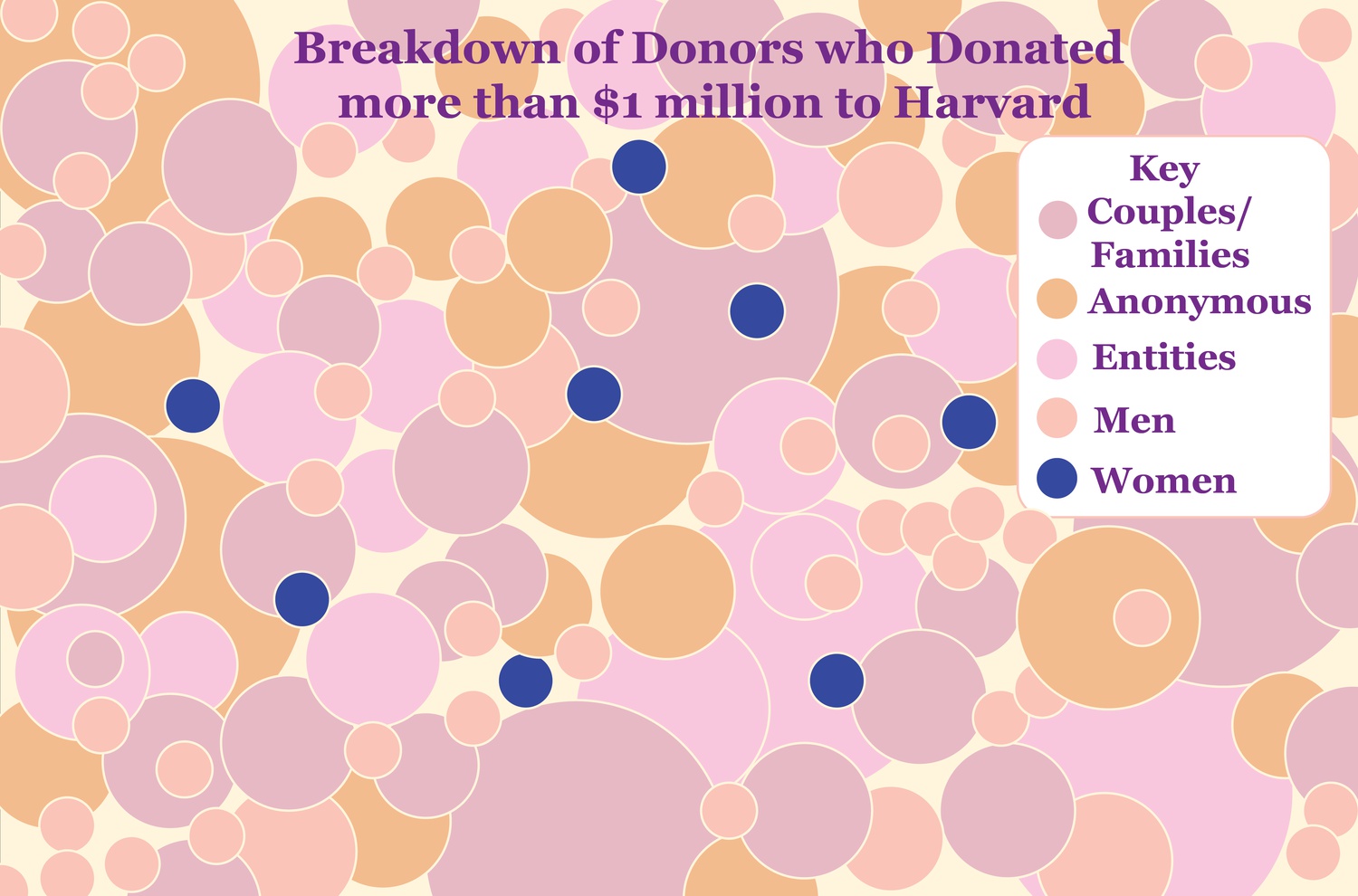 Harvard boasts the largest endowment of any university in the world and supplements its finances with hundreds of millions of dollars in donations annually. Despite the scale of Harvard’s philanthropic efforts, a sizable gender disparity persists among the University’s donors.

In the fiscal year 2020, 338 individuals, families, foundations, organizations, governments, and other entities donated more than $1 million to Harvard, according to the University’s “Report of Giving” released earlier this year.

Eight of them were individual women. They include four Harvard alumni, financial services executives, philanthropists, a former delegate to the United Nations General Assembly, and the Chief Operating Officer at Facebook.

The other donors include 51 individual men, 47 nonprofits or foundations, eight corporations, 109 couples or families, 13 trusts and estates, and the United Arab Emirates. There were also 101 anonymous donors.

But despite encompassing a small fraction of the listed donors, experts say the fact that women are on the list at all reflects shifting gender dynamics and attitudes around money and high-level philanthropy.

Linda Durant, former Vice President of Development for the Council for Advancement and Support of Education who is now a Laureate at the organization, said a decade ago, women would likely not have cracked the top donor roll.

Rather, Durant said large-dollar donations were primarily undertaken by married couples and their estates. She noted that many women have made significant strides in business and technology in recent years, increasing the number of female billionaires.

“Ten years ago it was mostly you focused on the couples, and you didn’t really see that many female billionaires, and now they're much more prevalent,” Durant said. “There's so many more entrepreneurs, and these women are in their own right, making their own statements about philanthropy.”

Debra Mesch, a professor of philanthropic studies at Indiana University-Purdue University Indianapolis, said an increasing number of women are the primary earners in their family, contributing to the increase in women-initiated gifts.

“Women are starting to out-earn their spouse,” Mesch said. “It used to be 20 years ago that [it] was a very small number.”

Mesch also said that the number of individual female donors may, in fact, be higher than it seems. Studies show women are more likely than male donors to remain anonymous in their giving, according to Mesch.

“Women in the past have been more hesitant about identifying themselves,” Mesch said. “Women tend to give more anonymously, they are less concerned about putting their names on buildings.”

Martha A. Taylor, co-founder of the Women’s Philanthropy Institute and former Vice President at the University of Wisconsin Foundation, also said she believes most anonymous donors of colleges and universities are women.

For joint gifts, it is harder to distinguish who was the primary giver, or who Mesch calls the “gas pedal” behind the donation, she said.

Una O. Osili ’94, a professor of economics and philanthropic studies at Indiana University, said there are a growing number of households in which women have great influence and are behind the push for joint charitable giving.

“We call those sort of the women-influenced households; [they] have a higher likelihood of giving and they give more,” Osili said. “That’s showing that even in the couple environment in the household setting, where women are at the table, in terms of decision making, there is more allocated in terms of funds to charitable causes; both the likelihood and the dollar amount.”

Mesch also said women may elect to give less to a greater number of organizations, compared with many male donors.

Mesch said this perception can cause institutions and schools to focus less on attracting female donors, under the mistaken assumption that women donate less.

Some of Harvard’s peer institutions have organized fundraising campaigns around the idea of recruiting women into giving circles. Dartmouth College launched “The Call To Lead Campaign” in 2018 in the hopes of securing seven-figure donations from one hundred women.

Durant said Dartmouth’s campaign serves as an example for other institutions seeking to include more women in their capital campaigns.

“It was a very specific campaign for women,” Durant said. “It proved that Dartmouth understood and knew that these women were able to give, wanted to give, and that they just had to really focus in and talk to them and find out what it is that they were willing to give to versus locking them in with the entire campaign.”

But some say that directed initiatives are unnecessary, and may risk falling back on gendered cliches.

Jeannie Bachelor Lavine ’88, who donated with her husband Jonathan S. Lavine, wrote in an email that she believes women should not be approached differently in fundraising campaigns.

Lavine also wrote that her contributions to the University were motivated by her family’s long-standing connection to Harvard.

“Harvard depends on the generosity of alumni and donors who support the university’s mission at all levels and enable the university to have a lasting impact in areas of teaching, learning, research and innovation,” Hennessy wrote in an emailed statement.

Deni T. Elliott, a professor of journalism and digital communication at the University of South Florida-St. Petersburg, said she believes institutions of higher education should strengthen their efforts to engage female affiliates, given their increasing financial power.

Taylor, the co-founder of the Women’s Philanthropy Institute, acknowledged that female representation in higher education has improved.

“I think development officers are one hundred percent better than when I started in 1975, in that they felt that the women didn’t even have a say in the giving, and they would just ask the man for his interest,” Taylor said. “Women have made a huge stride related to philanthropy in higher ed.”

“But it still lingers out there, the fact that we’re not asking women for what they’re interested in,” Taylor added.

A previous version of this article identified Linda Durant as the Vice President of Development at the Council for Advancement and Support of Education. In fact, she formerly served in that role and now works as a Laureate for the organization.