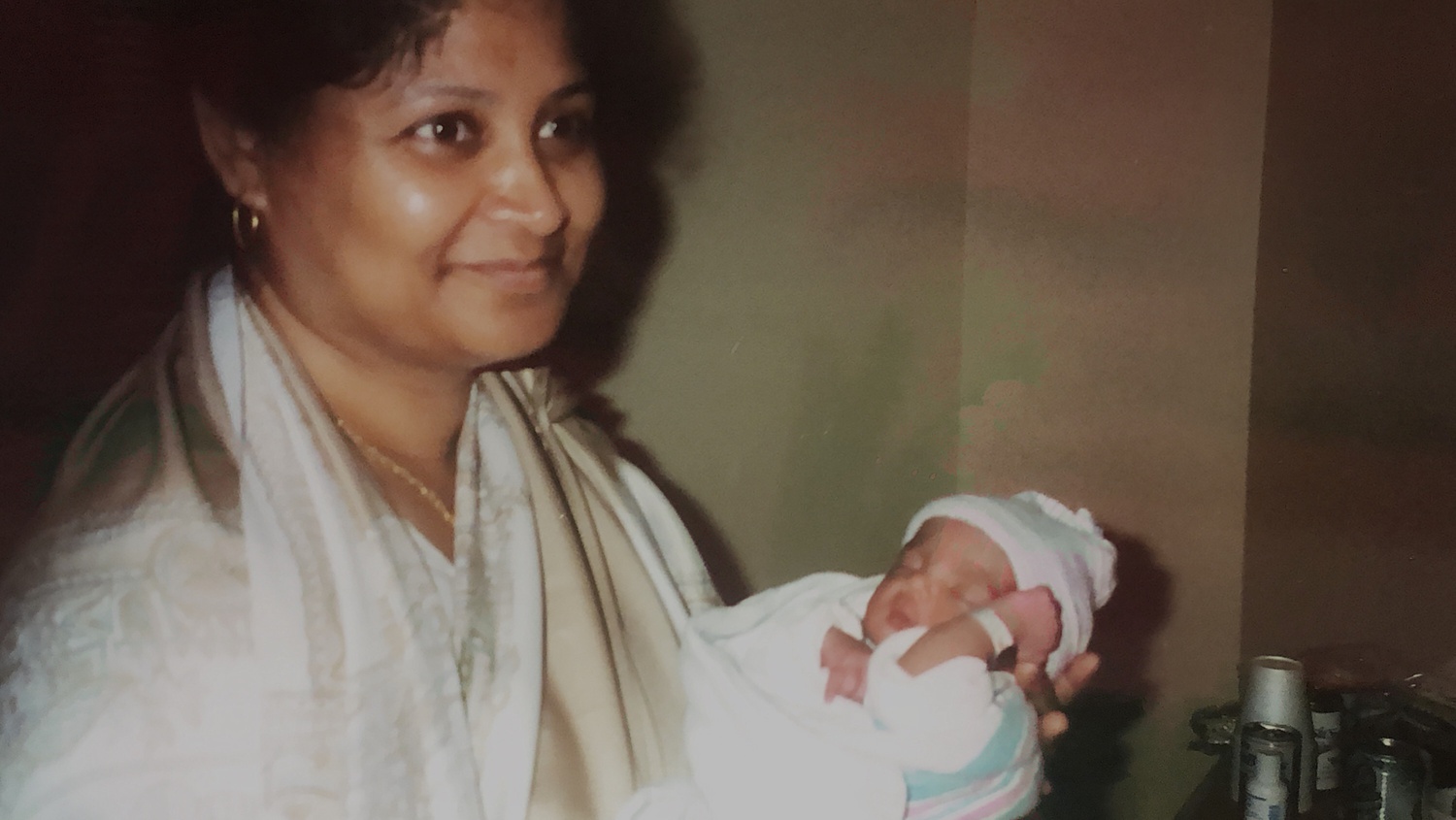 To Love a Stranger

The silence was in no way uncomfortable; most times, it was pleasant, even relaxing. But underneath was a low thrum of pent-up frustration, which I only became aware of every once in a while. There was so much I wanted to tell her — about my high school track meets, the school paper, later my college roommates — and so much I wanted to ask, that I simply could not.
By Saima S. Iqbal

I don’t remember much of my childhood. I seem to have misplaced the memories, tucked them away in some box at a massive storage facility and forgotten the lot number. Still, amidst the blur of the first couple years of my life, one person always remains in focus: my nanu, my mom’s mom.

Back then, my grandma was always visiting our house, and I was always visiting hers. My parents, who worked long, grueling hours, needed all the child care help they could get, and Nanu lived just five minutes away from us. Her home was like an extension of mine, except it was full of so many small, special delights. In the morning, Nanu would carefully brush and braid my hair with a colorful hair tie from her vast collection. After she hand-fed me rice, she sometimes let me wash her porcelain plates, which were decorated with sprawling green fig leaves — a real grown-up task, in my mind. And at night, we’d lie sideways on her bed and she’d whisper silly stories into my ear until I drifted off.

I didn’t notice it at the time, but Nanu and I never traveled far from her home — Nanu couldn’t speak fluent English and couldn’t drive. Even so, I never felt trapped or confined while with her. Her home was a world in and of itself to me, one where we all just happened to speak another language.

At some point in third grade, I lost the ability to speak Bangla. Although I could mostly understand my family members, I could not form the words myself. The sounds were familiar to me, but indistinct, too fluid to split up into separate words.

I can’t fully explain how this happened. I know I was sometimes embarrassed to speak a second language. It didn’t help that my teacher often asked me to translate for an E.S.L. student in our class, a Bengali boy best known for regularly peeing his pants. I remember coming home one afternoon and telling my parents I’d never speak Bangla again. But I doubt they would have tolerated my impulse decision if my sister’s teacher hadn’t suggested, incorrectly, that learning both languages could stunt her academic development — more than anything, my parents wanted my sister and me to excel at school. In exchange, we sacrificed something much greater: family and communal ties.

Before the pandemic, I visited my grandma only a handful of times per year. Each time, we rarely spoke. She asked me how I was and offered to make me food; we either played with my younger cousins or sat on the couch and watched sentimental Hindi dramas. I could follow the shows’ plots without the aid of subtitles. They were always modifications of the same story, comforting but monotonous.

The silence was in no way uncomfortable; most times it was pleasant, even relaxing. But underneath was a low thrum of pent-up frustration, which I only became aware of every once in a while. There was so much I wanted to tell her — about my high school track meets, the school paper, later my college roommates — and so much I wanted to ask, that I simply could not.

Growing up, I was shy and reticent around strangers. In college, I knew I had made a good friend when I could share my innermost thoughts and feelings with someone, and when they could open up to me in return. I figured that’s what it was to love someone: to try your best to get to know them, within their limits.

At my most cynical, I wondered how Nanu could possibly love me if she didn’t know me, certainly not as well as some of my friends — and how I could love her in return. 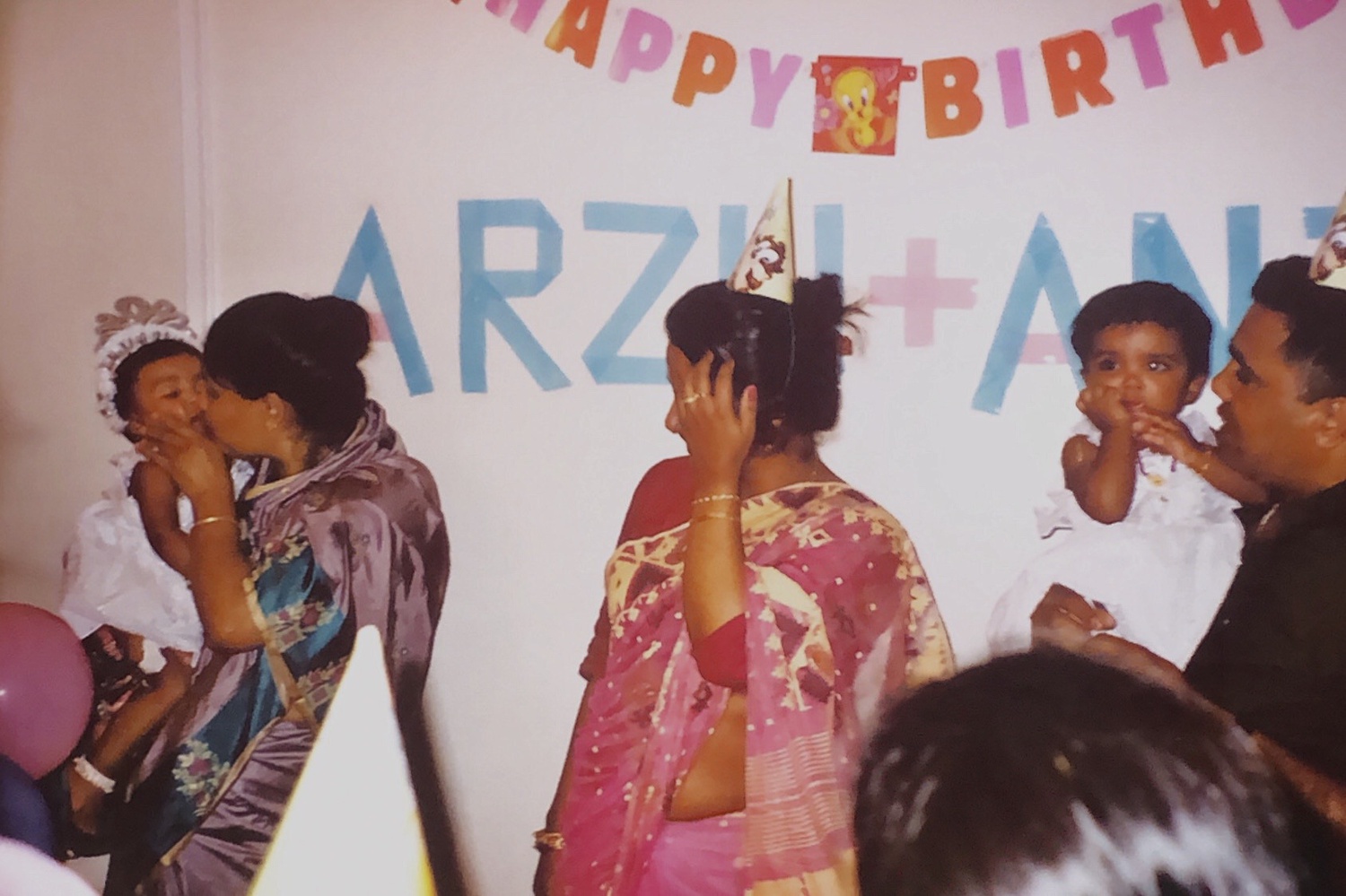 Nanu gives Saima a smooch on her first birthday. By Saima S. Iqbal

I was aware of the broad strokes of her life — growing up in a wealthy family in Bangladesh, immigrating to the States with my grandpa, becoming a widow not soon after — but I could only make sense of them through photographs. In one, Nanu stands outside of a large compound in Biswanath, dressed in a patterned salwar kameez, young and pretty. In another, she smiles as she waits on a table at the Indian fusion restaurant my grandpa opened. In yet one more, taken after my grandpa’s death, she and my mom and uncle order soft serve from an ice cream truck. They wear t-shirts and jeans; she wears a light green sari. A frantic expression flits over her face, or so I imagine.

Even when I could connect the dots between the images, I never knew how to relate them to the person in front of me. I wanted my nanu to be like the grandmas on televisions, the ones sitting in rocking chairs and reminiscing about the past, but she was stubbornly rooted to the present. Whenever I’d ask her about her childhood or her relationship with my grandpa, she’d offer a brief reply. Then she’d wave her hand and say, “That was so long ago — what does it matter now?”

On campus, my identity felt so malleable, which was both freeing and disorienting. I longed for something solid to hold onto. I envied friends who were sick of hearing their grandparents’ stories over and over again or who could trace distinctive traits like strong chins or melodic singing voices down their family lineages. The desire was, perhaps, petty, but it came from a serious place: if I couldn’t know my grandma’s story, how could I know my own?

Not soon after school shut down last spring, I unlocked a new bodily sensation: a skin-prickling restlessness that emerged whenever I looked up from my work, that wouldn’t ease with exercise or calls to friends. Something was wrong, something was missing, but what it was I didn’t know. The sensation faded with time, but persisted. It only truly vanished when I saw my extended family.

That summer, my sister and I began to go on walks with our younger cousins and to small family gatherings in my grandma’s backyard. Masked and more than six feet apart, we didn’t discuss much, besides the sorry state of the pandemic and the one good thing to occur during it: the birth of our cousin, Naail. The get-togethers were awkward, it’s true, but they brought me a primal comfort. On days my uncle and younger cousins chose to stay indoors, either at work or school, I met Nanu on the front porch. I sat on the steps as she quietly watered the vegetables in her crowded garden, a plastic blue watering can in hand. The breeze brushed over my legs, which were warm from resting on the scorching concrete. I thought of nothing; I said nothing; I was more relaxed than I had been in months.

When I FaceTimed my friends, I sometimes obsessed over what I said. Even if I had managed to make them laugh, I kept wondering whether I had been entertaining enough, eloquent enough, normal-sounding enough. I knew better of my friends than to think like that, but at the start of the pandemic I felt like I could lose anything. With Nanu, I could be the unvarnished version of myself.

In October, Nanu’s mother died in her sleep, at home in Biswanath. I walked over to Nanu’s house as soon as I heard. I wasn’t sure what to expect. What would Nanu look like in her most raw state? Would she be sobbing? Or would she be eerily silent? And what should I do in either case?

The answer turned out to be neither. Nanu was sitting on the porch, staring forward into space. Her mother had lived a long, happy life; there was nothing to mope about. Or so she said over and over again, as if reassuring herself it was true. Since coming to the United States, Nanu hadn’t seen her mother for decades. She learned of her death from a 1 a.m. WhatsApp message.

I racked my brain for sympathetic Bangla phrases, but none seemed fitting. I had no idea what sort of woman my great-grandmother was, never mind a picture of her relationship with my nanu. I concluded it’d be better to let my aunt and uncle do the talking. They spoke such rapid Bangla that I could only catch bits and pieces — “age 93,” “immediate burial,” “at peace.”

Is this what it’s like to crash the funeral of a stranger, I wondered, before chastising myself for being so self-absorbed. Really, I was crushed by the thought I could do so little to support my nanu. Sitting quietly and listening and attempting to beam compassion out of my eyes didn’t feel very productive.

After an hour or so, everyone ran out of stories about my great-grandmother and motioned to head home. I was about to turn around and unlatch the front gate myself when I suddenly felt Nanu’s warm, sturdy body against mine. Her cheek was pressed into my shoulder. She had closed the distance between us — she was hugging me.

After some initial shock, my arms found their way around her.

“Thanks for coming,” she said softly.

I nodded, my face flushed with heat. So I had comforted her after all, even without words. I had cared for her, just as she had for me so many times before — I had loved her.

I squeezed her one last time, then let go.

The first winter of Naail’s life, my sister and I regularly trekked through snow to see him, to hold his squirming body in our laps. We knit him tiny hats, socks, and mittens. I wrote him letters in my journal; I wanted his future self to know just how well-loved he was, just how much of a joy it was for me to watch him grow. Aside from him, my cousins are all near in age to me; I’ve never cared for them in the same way.

Since then, my aunt has sent daily photos of him to our extended family group chat: evidence of him standing for the first time, of him greedily eating blueberries, of him tying his shoes (or at least trying to). I initially suspected I would become desensitized to them. But even now, every time I receive one, I can’t stop smiling.

I love him so strongly it often surprises me. He can’t yet express himself, in either English or Bangla, but it doesn’t matter. He doesn’t need to respond to me. What I feel for him is both simple and inexplicable. It is what I imagine my nanu feels for me.

I know that Naail will change as he grows older, his features sharpening, his sweet demeanor morphing into that of a teenager’s. I know that we may grow apart, that the time we share may be filled with awkward silences. I also know a part of me will always love a part of him.