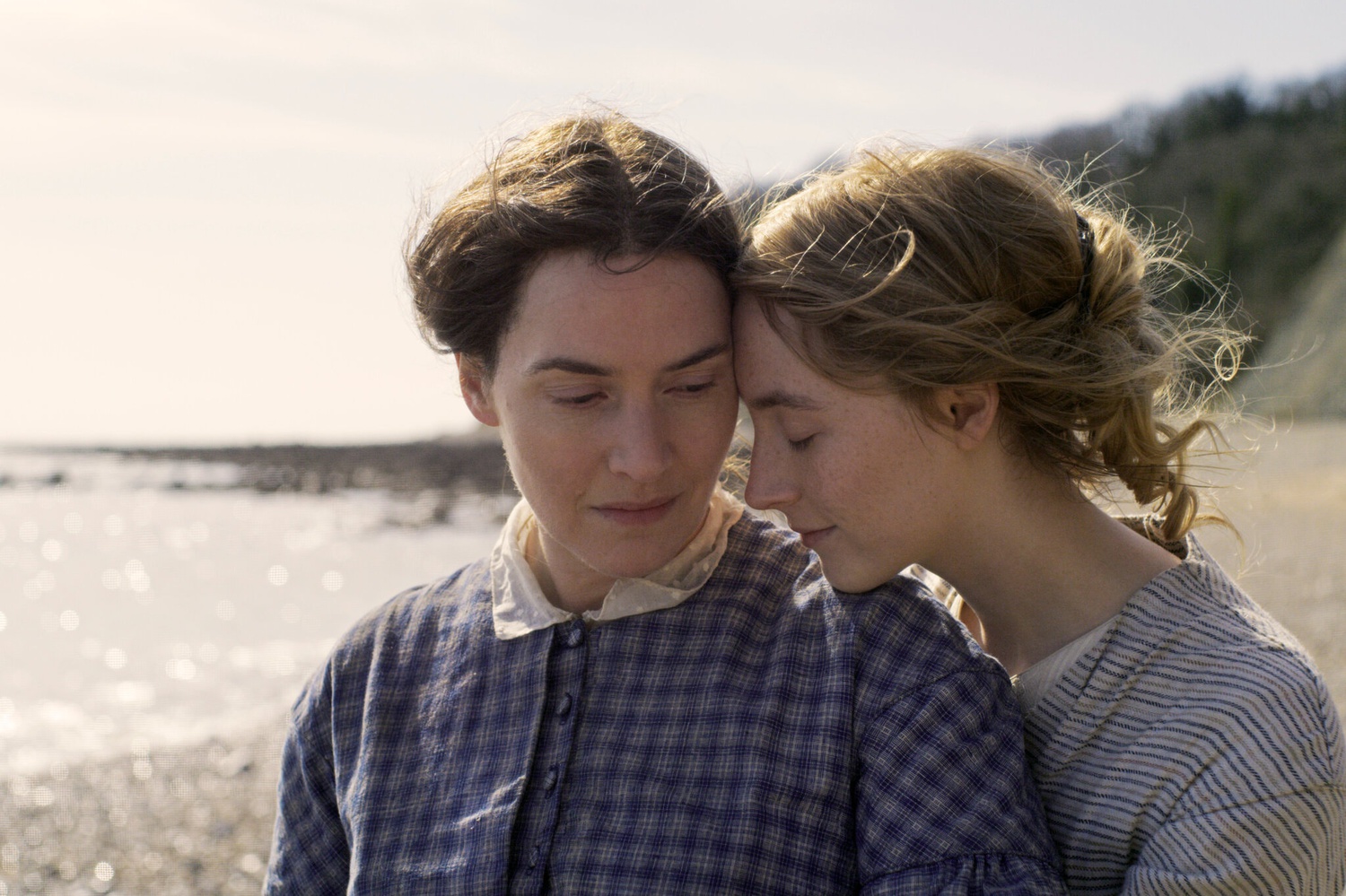 Director Francis Lee’s “Ammonite” is a thing of drab beauty, brimming with grey skies and muted ardour. Set among the fossil-studded cliffs of Lyme Regis, England, Lee’s second film chronicles a fictional relationship between two historical figures. It hits all the right marks — the cinematography is stunning, the acting is superb, the script sparse but beautiful. But ultimately, its emotional core leaves viewers unfulfilled.

Kate Winslet gives a career-defining performance as the gruff, astute paleontologist Mary Anning, torn between her love for the work for which she gains no recognition, and her responsibility to provide for her ailing mother by selling off the fossils she finds. Saoirse Ronan is an apt foil as Charlotte Murchison, a wealthy man’s sick wife who comes to take the air in Lyme Regis. There is no want for talent and warmth in the rest of the cast; the shy foreign doctor played by Alec Secăreanu of “God’s Own Country” and Anning’s former flame Elizabeth Philpot, played by the inimitable Fiona Shaw, are two standouts.

“Ammonite” is a study in contrasts: the diligent, taciturn Anning set against the temperamental, wealthy Murchison. They are never quite on equal footing. Anning spends much of the film caring for Murchison as a child or invalid, tucking her in bed and putting cooling cloths on her body. In one of Winslet’s best scenes, they attend a social soirée together; Anning watches Murchison and her new high-society friends from afar, her hope that Murchison will turn to look at her (and the inevitable disappointment when she does not) almost painful to watch. The gulf between them is never more stark than when Murchison kisses Anning right in front of a housemaid, then dismisses Anning’s obvious bewilderment with an offhand, “It’s just the maid.”

This distance between the two romantic leads is clearly a purposeful decision on the part of Lee; the lack of intimacy is baked into the bones of the screenplay and the directing. In one of several out-of-context stand-alone scenes scattered throughout the latter half of the film, they are framed in bed together. Murchison is fully clothed and looking out past the lens. Anning, naked and curled around her, could be miles away as she tells a bawdy joke in a detached monotone. Though the distance serves a narrative purpose, it also undercuts the romance itself. At times the script seems to forget the love story, leaving Winslet and Ronan to do the heavy lifting of making it believable.

More subtle — and, occasionally, more interesting — than the romantic relationship between Anning and Murchison is the unfolding story of Anning’s scientific legacy. In the opening scene, a male curator of the British Museum discards Anning’s handwritten tag on an ichthyosaurus and replaces it with a typed note, sans Anning’s name. Past that, there is the wonderful visual metaphor of the titular ammonite, which Anning pulls from the black cliffs of Lyme Regis, cleans with painstaking precision, and sells to Roderick Murchison. It makes only one other appearance, when Anning goes to visit Murchison in her decadent London home. Stored in a glass cabinet among other curios, the ammonite has been relabeled, clearly by Murchison herself, so that Mary Anning’s name holds pride of place. The beat during which Anning looks at it is perhaps the most convincing moment of connection between the two leads — and they’re not even in the same room.

Finally, an obligatory note on “Portrait of a Lady on Fire.” Many journalists have pointed out the uncommon similarities between “Ammonite” and director Céline Sciamma’s “Portrait of a Lady on Fire.” That comparison is overhasty. Yes, on paper, some of the scenes from “Ammonite” bear more than a passing resemblance to those from “Portrait.” There is the walking along a windy beach and the lacing up of a corset and the playing of a keyboard while a lover watches. But “Portrait” is suffused with longing, rich with warmth and color, a thesis on the essential equality of the female gaze. “Ammonite” is not — and has never striven to be — the same. “Portrait” feels like staring into a bonfire; “Ammonite” feels more like being on the business end of a flamethrower.

Still, “Ammonite” is well worth the watch, if you look past the slightly gratuitous sex scenes and occasionally limping romance. Look out for the ending shot, which is hauntingly beautiful: two women, in a man’s institution, separated by a glass container that at once blocks them from each other and keeps Anning from her own work and legacy. Especially when set in contrast with the last shot of Lee’s debut film, “God’s Own Country,” which pulls the two male lovers together into an embrace framed by the harsh corrugated lines of a factory, it’s a knockout. Say what you will about Francis Lee — the man knows how to end a film.