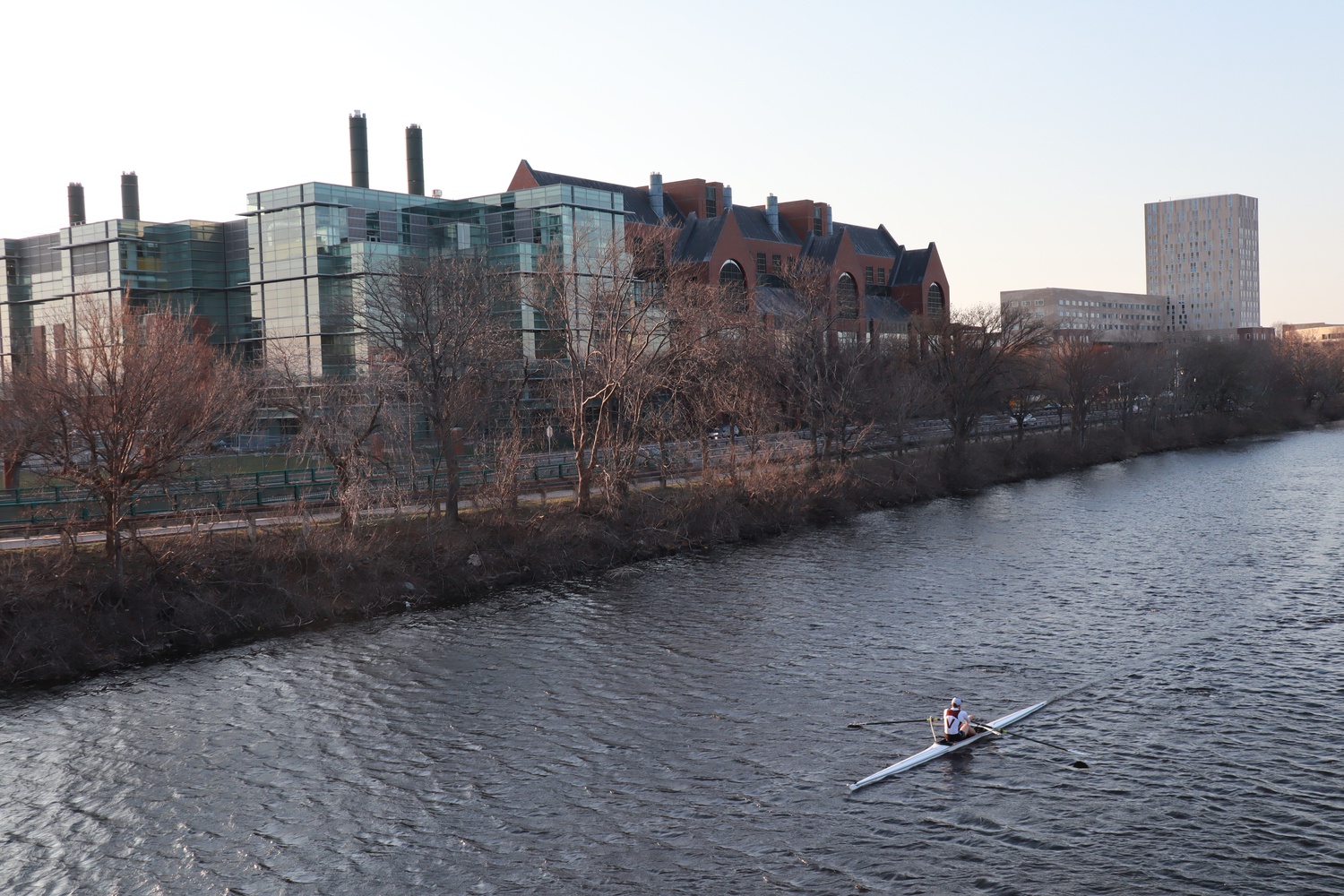 The North Allston Drainpipe Expansion Project would build an outfall into the Charles River on state-owned parkland in front of Soldiers Field Rd. and the offices of Sanofi-Genzyme, shown above. By James S. Bikales
By Maribel Cervantes and James R. Jolin, Crimson Staff Writers

Harvard has pledged to foot the estimated $50 million bill for the drainpipe expansion, which the BWSC said will enlarge the width of some existing pipes, add two water filtration machines, and direct stormwater through a new outfall into the Charles River.

This meeting comes after Massachusetts Secretary of Energy and Environmental Affairs Kathleen A. Theoharides certified the BWSC’s environmental notification form in March, which drew scrutiny from local residents and environmentalists concerned about construction and water quality impacts.

Despite the certification, the project faces substantial political hurdles. Due to the proposed outfall being on state parkland, it requires state legislature approval pursuant to Article 97 of Massachusetts’s constitution, but local politicians are reluctant to proceed, citing the BWSC and Harvard’s alleged lack of outreach. Monday’s information session was meant to serve as one step in such outreach efforts, Sullivan said in an interview in late March.

“You’ve got to remember that we have climate change occurring, and we do see increased rainfalls, and, anticipating that, we have taken this and made it a larger pipe for the future, so we can remove the water from your area,” he said.

“We cannot take the major storms until we get the major pipe installed,” he added later.

Sullivan acknowledged that, in order to construct the easement that would allow stormwater to flow into the Charles, the BWSC still needs to obtain nine forms of approval, though he identified the Article 97 approval as the primary factor preventing the project from moving forward.

“We’re really anxious to get the proper size pipes that were envisioned 105 years ago, to drain these neighborhoods — to do the right thing for the total drainage, and the anticipated climate change rainfall that we get,” he said, referring to plans from 1916 and 1917 for an enlarged drainpipe system that never came to fruition.

State Rep. Michael J. Moran — who along with State Sen. Sal N. DiDomenico expressed hesitation about granting Article 97 approval in a March letter to Theoharides — said during Monday’s meeting that he doubted the project was aimed at improving the lives of his constituents.

“If the problem is truly the flooding issue around the Allston community, then those people are ratepayers of [Boston] Water and Sewer, and I think their issues should have been dealt with as ratepayers — not as part of a bigger project that is undoubtedly going to benefit Harvard University the most,” said Moran, who represents the north Allston area impacted by the drainpipe.

Moran said he wants to make sure that this project is the “right thing to do.” He added that this meeting would be the “first of many,” during which he wants the voices of the “direct abutters” and of his constituents to be heard.

“I would rather stay focused on the areas that need help and the communities and houses that are in harm’s way. And I would like to stay focused on a way that we can help them most immediately,” Moran said.

Ed A. Kotomori, an Allston resident and member of the Harvard-Allston Task Force, said parts of his neighborhood had flooded twice and needed to be “repaired immediately.”

“This neighborhood is not being taken care of, and I’m damn mad about it,” Kotomori said. “I think Harvard University has to step up to the table now and correct it.”

“We want it done as fast as possible. Otherwise our cooperation with Harvard will end. We’ve co-operated with them for 15 years,” he added.

University spokesperson Brigid O’Rourke wrote in an email following the meeting that the drainpipe project will “significantly improve neighborhood resiliency to storm events for thousands of residents.”

“More than 1,500 households in North Allston will directly benefit from this substantial upgrade to the City’s infrastructure,” she wrote. “Completing the construction of the remaining portions which allow the drain to reach the Charles River is reliant on Article 97 legislation, and will be managed in coordination with neighbors, City and State agency staff, elected officials, and the surrounding residential, business and University community.”

— Staff writer James R. Jolin can be reached at james.jolin@thecrimson.com.

— Staff writer Maribel Cervantes can be reached at maribel.cervantes@thecrimson.com.