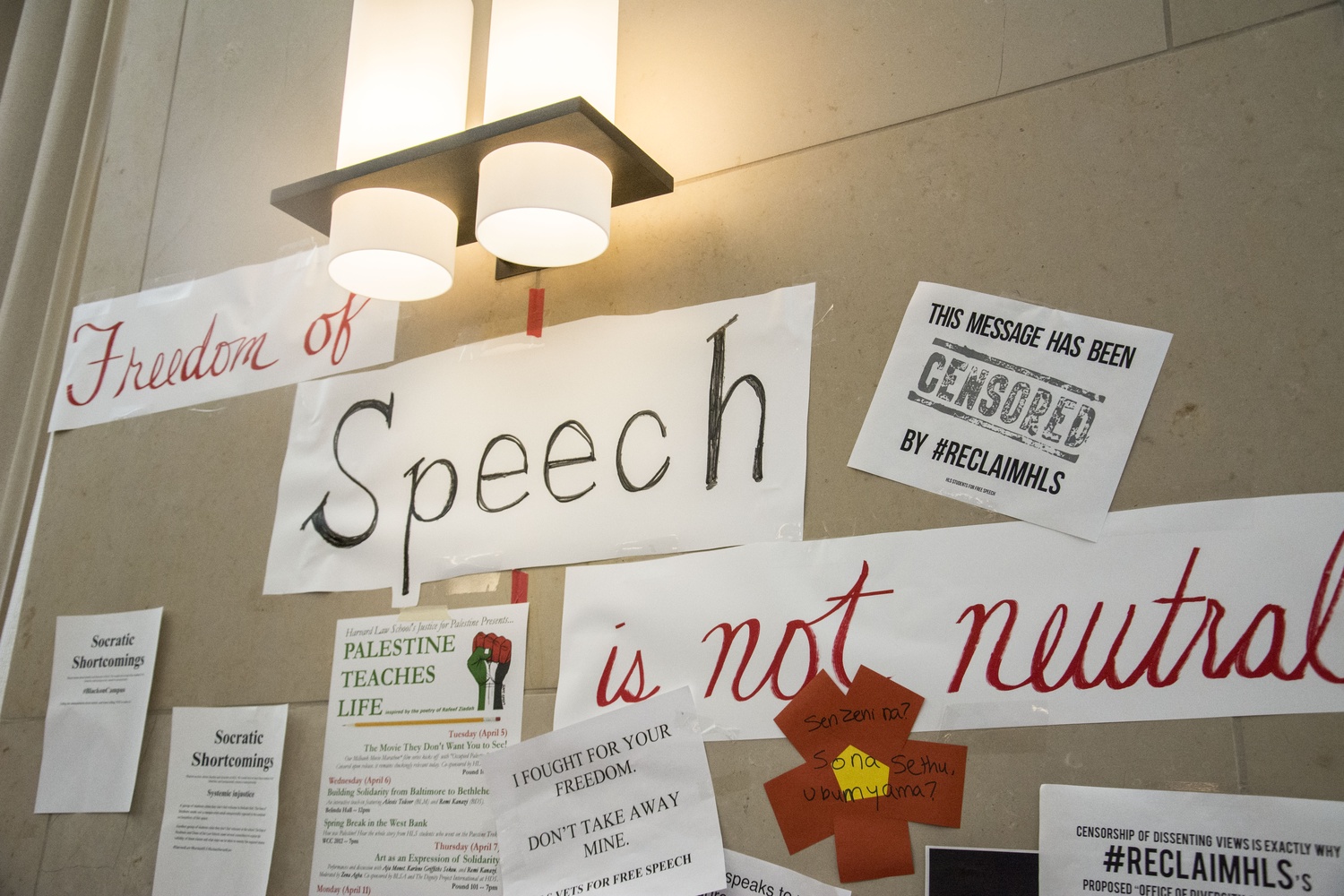 Following controversies in 2015 and 2016, a wall in the Caspersen Student Center of Harvard Law School bore messages from members of activist group Reclaim Harvard Law as well as other students who claimed the group had a chilling effect on campus freedom of speech. By Sidni M. Frederick
By Kate N. Guerin, Crimson Staff Writer

First Amendment legal scholars convened to discuss the complexities of supporting freedom of speech and fostering an atmosphere of inclusion and belonging in academia during a Tuesday webinar.

Charleston began the dialogue by asking about the boundaries of free speech rights in conversations related to controversial political issues.

“One of the things that we’re grappling with on college campuses generally is, how do we strike a balance between promoting free speech and protecting students, protecting minority viewpoints, in the context of the sort of broader moments that we find ourselves in when things can be very controversial?” Charleston said.

Chemerinsky argued for the importance of protecting the freedom of speech, even speech that is viewed unfavorably.

“I’ve often said that the only way that my speech or your speech can be protected tomorrow is to safeguard the speech we don’t like today,” Chemerinsky said.

Sykes described instances of professors using offensive language in the classroom and how universities should consider handling these situations.

“I often say between doing nothing and firing someone are all of the good ideas for how you can respond. And so I try to encourage both students and faculty to think creatively about how we repair harm and repair communities,” Sykes said.

He added that creating a relationship of trust between student activists and universities will allow institutions to deal with instances of problematic speech.

“If you’re in a place where you feel safe and welcome, and you have a strong community, you’re less likely to be really thrown off by one incident,” Sykes explained.

Chemerinsky said he believes “all ideas and views” — aside from speech that evokes violence — can be presented on college campuses and added that administrators should work to foster an “inclusive” environment.

“At the campus level, I think that all ideas and views can be expressed, even offensive ideas and views. But that doesn’t mean that the campus is powerless to make an inclusive community,” he said. “And I think we have to focus on what are the things as campus administrators we should be doing in light of speech that, at times, is offensive, can be racist, sexist, homophobic?”

Chemerinsky said those in campus leadership should use instances of offensive speech as an opportunity to establish and reaffirm the institution’s principles, help organize counter-demonstrations, and take “affirmative steps” to promote inclusion.

“We have to denounce hate speech when it occurs, we have to provide forums for counter-speech, we have to find ways of empowering our students of color, students from marginalized communities,” Chemerinsky explained.

“I think our challenge is to make sure that when the hate speech goes out, it doesn’t drown out all of the other things,” he added. “We want to make sure all those other things are really what becomes most salient on campus.”

“We do fundamentally believe that by allowing for vigorous debate, that we arrive at really the ultimate goal, which is truth,” Charleston said. “That’s where we can oftentimes challenge ideas that we might even find repugnant personally, because certainly speech that is restricted today may turn into speech, that is, in fact, ours that is then restricted tomorrow.”

Ben-Porath said in an interview after the event that interpretations of freedom of speech are continually shifting.

“I think that American society’s perspectives on freedom of speech are evolving. Right now, they are undergoing a generational change and I think it’s going to end up to be significantly to the better,” Ben-Porath said.

–Staff writer Kate N. Guerin can be reached at kate.guerin@thecrimson.com.