What to Expect From the GameStop Movies 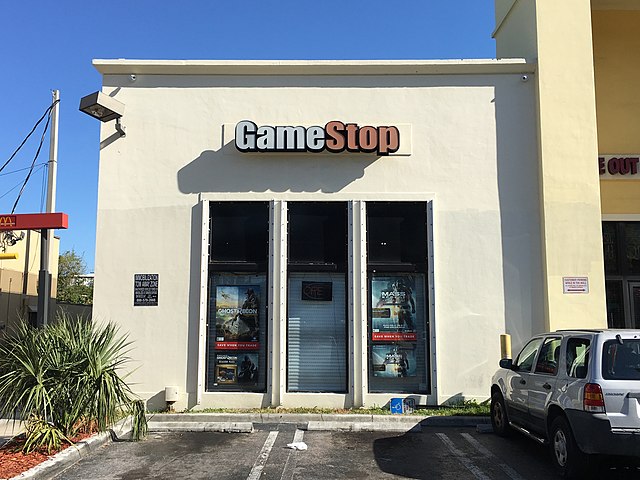 When GameStop stock was shorted by Reddit investors, production companies were quick to buy the rights for future films and shows. By Courtesy of Phillip Pessar
By Cassandra Luca, Crimson Staff Writer

The entertainment industry is never one to turn down a cash cow. After the buying of long positions, through which Redditors held onto the GameStop’s stock as hedge fund managers shorted it last month, Netflix, MGM, and HBO all optioned the rights to the “saga” for future movies and docuseries. For those who haven’t heard, Redditors drove up the price of the video game store’s stock at the end of February after hearing that Wall Street investors had gotten wind that GameStop’s value would plummet. Their collective mass buying of the stock in turn drove the value up by 700%, causing major losses for investors who had betted against that happening. It’s too early to say exactly what angle the upcoming movie and TV features will have, but it’s likely an angle that we’ve seen before.

Take “The Social Network,” for instance. The 2010 film chronicled the birth of Facebook, depicting Mark Zuckerberg’s machinations and his eventual power grab from the men who had helped him create the product in the first place. Perhaps because in 2010, Facebook was neither as large nor as infamous, the movie focused more on the company’s birth rather than anything else. Arguably, the GameStop movies could do the same thing: focus on the drama and high stakes of the stock price rising astronomically, but far less on deeper issues that maybe merit further scrutiny, namely that when regular people play the stock market in the way Wall Street managers do, there are penalties, even though there aren’t really any when the opposite is true.

There are two immediately obvious paths for these entertainment giants to take. They could zoom in on the action, focus on an individual Redditor or two, and create action films or docuseries that teach the audience a surprising amount of information about finance, Wall Street, and how the stock market works. In these productions, the emphasis would be on plot, and perhaps less on the broader situation.

The alternative to that is far more interesting and necessary to explore: what led to these Redditors’ decision to establish a long position — to drive the price up — in the first place. Many of them were angry about widening wealth inequality, only exacerbated further by the pandemic, and wanted to “go to war.” And they’re completely justified in doing so, as we’ve gotten used to watching finance executives play with the lives and investments of millions. Of course, Wall Street got involved, worrying that these shenanigans weren’t fair, but since when has the stock exchange been a reliable arbiter on what’s fair? (It’s hard to forget what those same Wall Street executives did more than a decade ago in the 2008 recession.) It’s not that Redditors had a particular bone to pick with the company, but rather that perhaps many of them felt they had no other recourse. It’s no secret that the rich are getting richer and the poor are getting poorer, especially during the pandemic’s k-shaped recovery. After all, Jeff Bezos makes a little under $150,000 per minute, while others wait desperately for stimulus checks.

It’s too early to tell what angle Netflix and the other companies will take. But it would be interesting, refreshing, and thought-provoking if they moved away from telling the story of the chaos that ensued, and more about why this happened in the first place. Who knows — we may be pleasantly surprised.

A previous version of this story misstated that the GameStop stock was shorted by many investors earlier this year. In fact, investors established long positions which drove the stock price up.

—Staff writer Cassandra Luca can be reached at cassandra.luca@thecrimson.com.