Over 40 percent of respondents to The Crimson’s survey of Harvard’s Faculty of Arts and Sciences said they believe the University’s standing within higher education has fallen during the past decade.
By Meera S. Nair and Andy Z. Wang 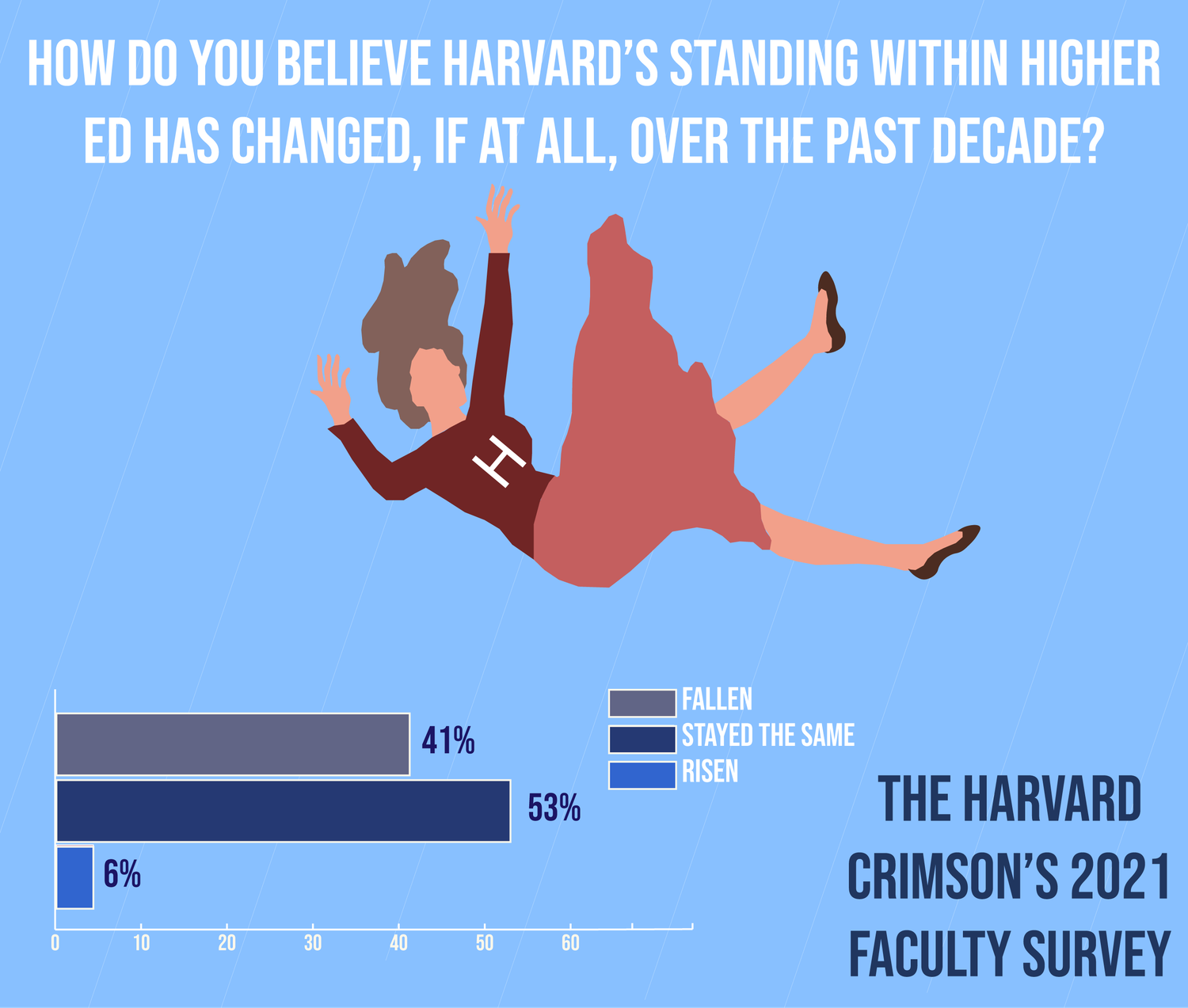 Over 40 percent of respondents to The Crimson's survey of Harvard's Faculty of Arts and Sciences said they believe the University's standing within higher education has fallen during the past decade. By Meera S. Nair

Over 40 percent of respondents to The Crimson’s survey of Harvard’s Faculty of Arts and Sciences said they believe the University’s standing within higher education has fallen during the past decade.

In addition, nearly 70 percent of faculty respondents said that grade inflation is a “prevalent” issue within their departments, with 34 percent “strongly” agreeing.

The Crimson distributed its faculty survey to more than 1,180 members of the FAS in late February, polling Harvard’s flagship faculty on key University policy decisions, challenges they face as academics, and pressing issues on campus — including the repercussions of the Covid-19 pandemic. Tenured, tenure-track, and non-tenure-track faculty all received the survey.

The 94-question survey obtained more than 300 responses, though not all respondents answered each question. The anonymous survey, a link to which was emailed to nearly every member of the FAS, was open from Feb. 26 to March 5. The Crimson did not adjust the data for possible selection bias.

The first, second, third, and fourth installments of The Crimson’s 2021 faculty survey series explored faculty perspectives on tenure procedures, campus divestment movements, the climate and culture of the FAS, and the response to pandemic, respectively. This fifth installment examines how faculty view the University’s governance and standing within higher education.

University President Lawrence S. Bacow’s approval rating from faculty respondents increased between 2020 and 2021, from 39 to 48 percent. The proportion of respondents who said they believed Bacow has represented their interests well also rose slightly, from 25 to 31 percent.

Faculty opinions of FAS Dean Claudine Gay — consistently more favorable than Bacow — also marginally improved between 2020 and 2021. Her approval rating rose from 47 to 56 percent, and the proportion of respondents who believe she has represented their interests well grew from 39 to 44 percent.

A substantial majority — 69 percent — of respondents said they do not believe monthly faculty meetings are an effective forum for FAS faculty to express their interests. When prompted with a write-in question, several respondents described the meetings as “too impersonal,” “formulaic,” “too scripted,” and “largely ceremonial,” as well as poorly attended by members of the Sciences Division and the School of Engineering and Applied Sciences.

Common responses to a write-in question about what Bacow and Gay should prioritize during the rest of their terms included increasing support for non-ladder faculty, reforming the tenure review system, addressing climate change through fossil fuel divestment, retaining faculty of color, and maintaining academic freedom. One respondent said Bacow and Gay should prioritize the implementation of “more visionary initiatives,” as opposed to “maintenance of the status quo.”

Nearly 70 percent of respondents said they believe grade inflation is a “prevalent” issue within their departments, with 34 percent agreeing “strongly.”

In a 2013 faculty meeting, then-Dean of Undergraduate Education Jay M. Harris said that the median grade at the College is an A-, and the most commonly awarded grade is an A.

However, attitudes towards the prevalence of grade inflation varied based on discipline.

Harvard’s Treatment of Its Workers

After transitioning to remote operations in March 2020, the University guaranteed full pay and benefits for all employees whose jobs had been idled by the pandemic.

However, starting in January 2021, the University ended pay and benefits for idled contract workers and reduced pay for directly-employed staff to 70 percent. Following the announcement, more than 1,100 Harvard affiliates signed a petition urging the University to extend employment protections for contract workers.

Facing significant budget deficits, 56 percent of respondents “strongly” agreed that the Harvard Corporation should draw more heavily on the University’s $41.9 billion endowment to support the FAS budget during the pandemic. Another 23 percent “somewhat” agreed.

In fiscal year 2020, 53 percent of the operating revenue of the FAS came from the endowment, a proportion only exceeded by the Divinity School and the Radcliffe Institute.

Though Gay initially announced last June that the FAS would furlough some “fully or partially idled” workers as part of cost-cutting measures to balance its budget, the proposed furloughs were ultimately not enacted. During an interview with The Crimson last month, Gay declined to comment on specific cost-cutting measures the FAS is currently pursuing.

During a faculty meeting last fall, FAS Dean for Administration and Finance Leslie A. Kirwan ’79 said that making up the budget deficit may require major, long-term “structural” changes.