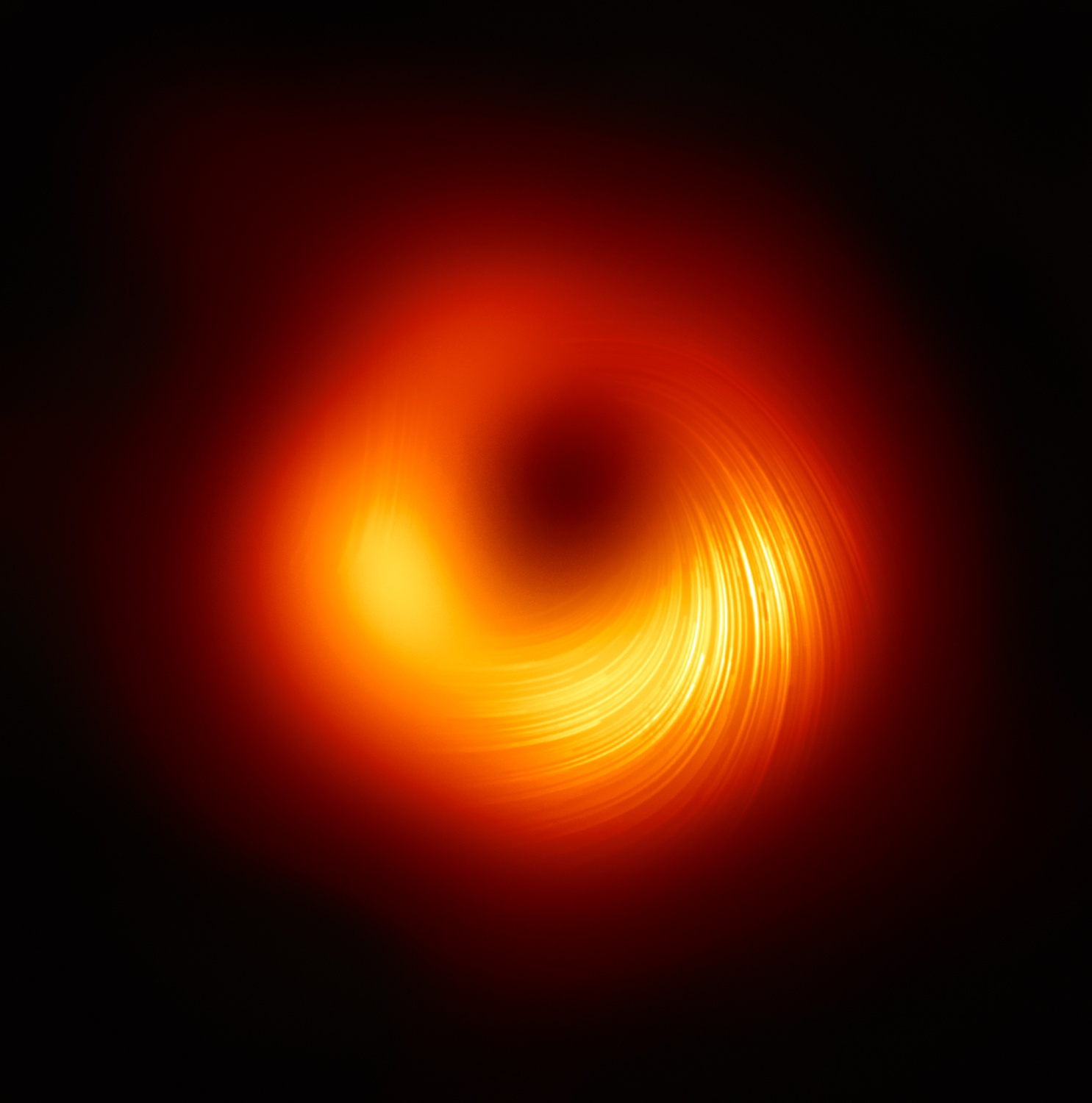 Researchers with the Event Horizon Telescope collaboration captured the first-ever image of the polarized emission at the center of a black hole, which is a signature of magnetic fields. By EHT Collaboration
By Noah J. Caza and Christie K. Choi, Crimson Staff Writers

A team of astronomers, including Harvard affiliates, have captured the first-ever image of a black hole’s polarized emission — which offers insight into its magnetic fields — according to an article published in the Astrophysical Journal Letters in late March.

The Event Horizon Telescope collaboration, an international collaboration of astronomers focused on understanding black holes and their environments, also captured the first-ever image of a black hole in 2019. Members of Harvard’s Black Hole Initiative and Center for Astrophysics are part of the collaboration.

The most recent historic discovery captured the polarization images of the supermassive black hole at the center of the M87 galaxy.

The data collected for this research came from telescopes strategically placed in locations across the globe, including in Hawaii, Mexico, and the South Pole — which work together to “turn the Earth into a collecting dish,” said Richard J. Anantua, a postdoctoral fellow at the Black Hole Initiative and the CfA.

Maciek S. Wielgus, a postdoctoral fellow at the Black Hole Initiative and the CfA, said the EHT observations revealed the “amount of linear polarization and orientation of the polarization vector.” From these observations, the team was able to learn more about the magnetic field of the black hole.

The study primarily concludes that the M87 black hole looks like it has “strong magnetic fields near the event horizon,” said Daniel C. M. Palumbo, an Astronomy Ph.D. candidate at Harvard and an EHT collaborator.

Being able to understand magnetic fields “anywhere in space,” let alone surrounding a black hole, is very difficult, according to Palumbo. As a result, the EHT collaboration’s success in capturing the polarized emissions is a major milestone in the field of astrophysics.

In April 2019, the EHT published the total intensity data of the M87 black hole and the first-ever image of a black hole from this data.

“With these first results about total intensity, when we didn’t care at all about ‘is it polarized or not,’ we just cared about the total amount of energy,” Wielgus said.

During the two years from then until now, the team focused on calibrating the data to learn about the black hole’s polarization, with the end goal of understanding its magnetic fields, he added.

Wielgus said the polarization image and the accompanying research was made possible largely due to the advancement of technology in recent years. He added that there is “no chance” this accomplishment could have occurred a decade ago.

“We really need to record a lot of data,” Wielgus said. “All the way to, currently, 64 gigabits per second — 64 gigabits means every second you get an eight gigabyte of data just being greeted into your hard drive. This requires electronics that were just not available.”

This scientific feat was achieved despite the ongoing challenges presented by the Covid-19 pandemic.

“We are doing data analysis and we need really frequent communication,” said Kazunori Akiyama, an MIT astrophysicist affiliated with Harvard’s Black Hole Initiative. “This pandemic doesn’t allow people to discuss something in the same place, so that was also a kind of logistical challenge.”

Palumbo recounted the “heart-pounding moment” when results first came out of the imaging process and he was “peering directly at the shadow of a black hole.”

“This is a thing that looks kind of like a donut, and there’s a black hole in the middle and we’re looking at it — it seems like you’re seeing something forbidden,” he said. “So that magic sort of carries through.”

As for the research group’s future goals, Akiyama said that the EHT will not be stopping here.

“This is just only the beginning — so we will see much more beautiful images and the fantastic nature of the black hole over the next several years,” he said.