When the anti-affirmative action group suing Harvard College over its race-conscious admissions practices petitioned the U.S. Supreme Court to take up the case last week, Students for Fair Admissions reiterated arguments it has made since first suing Harvard roughly seven years ago — and also introduced fresh arguments to the justices of the nation’s highest court.
By Vivi E. Lu and Dekyi T. Tsotsong 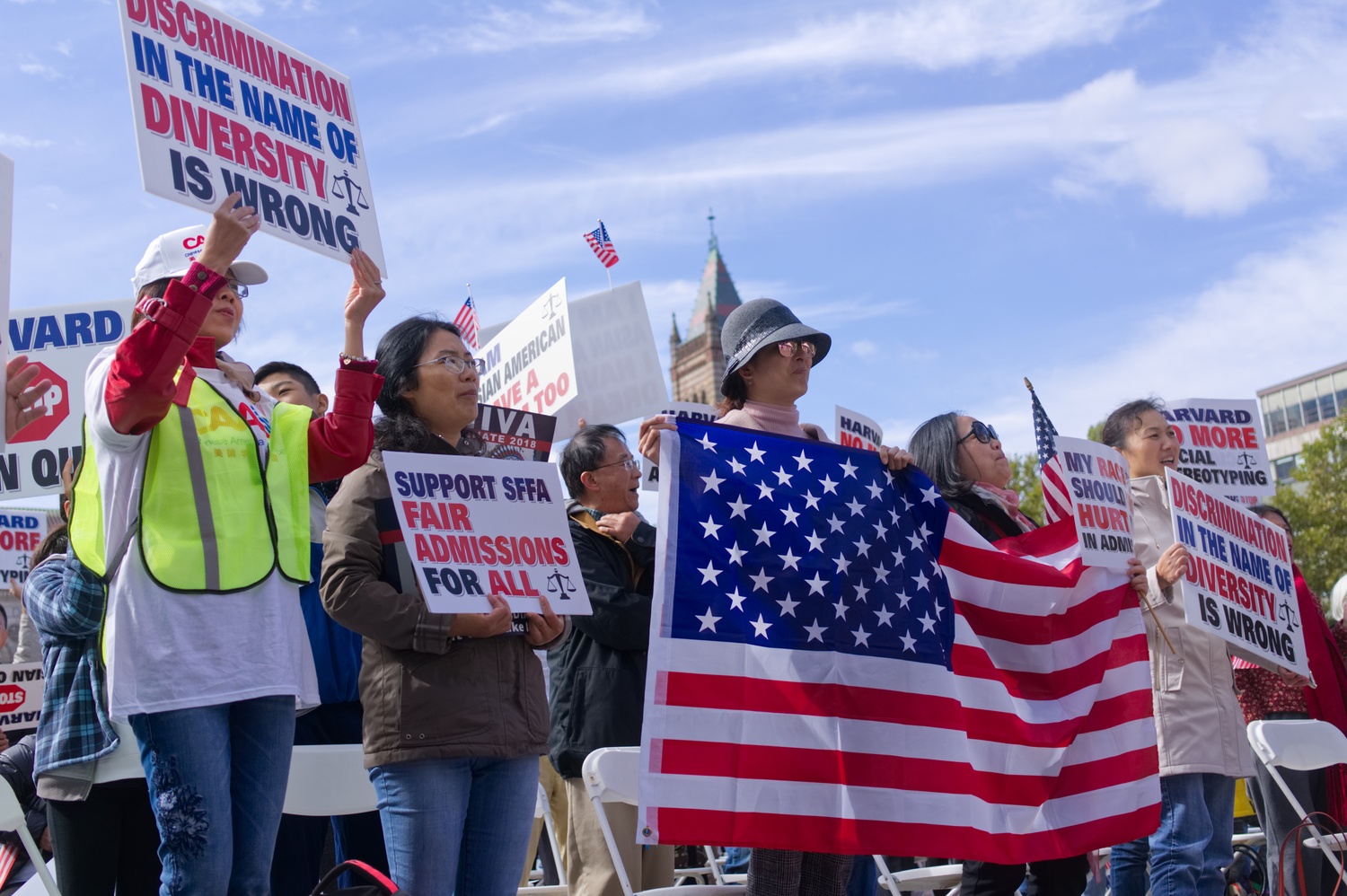 Supporters of Students for Fair Admissions at a rally in 2018. The anti-affirmative action group petitioned the Supreme Court last week to take up its lawsuit against Harvard. By Brendan J. Chapuis

When the anti-affirmative action group suing Harvard College over its race-conscious admissions practices petitioned the U.S. Supreme Court to take up the case last week, Students for Fair Admissions reiterated arguments it has made since first suing Harvard roughly seven years ago — and also introduced fresh arguments to the justices of the nation’s highest court.

The high-profile lawsuit against Harvard College over its use of race in admissions escalated last week when SFFA petitioned the Supreme Court to grant a writ of certiorari. For the Court to hear the case, four out of nine justices on the bench must agree.

In its petition, SFFA’s lawyers refuted those courts’ rulings and again alleged Harvard illegally discriminates against Asian American applicants under the 1964 Civil Rights Act’s Title VI, which prevents federally-funded programs or institutions from discriminating based on “race, color, or national origin.”

During a Tuesday meeting of the Faculty of Arts and Sciences, University President Lawrence S. Bacow said Harvard will “vigorously” defend its race-conscious admissions practices before the highest court in the nation if it chooses to take up the case.

While SFFA doubled down on that long-standing argument, the group’s lawyers also introduced a new argument: that the Supreme Court should consider overturning the 2003 landmark case Grutter v. Bollinger, in which the Court ruled the use of race in higher education admissions practices is constitutional.

If the Court chooses to take up SFFA v. Harvard, its response to that argument will determine the fate of affirmative action throughout U.S. institutions of higher education.

Here’s what you should know from SFFA’s petition.

SFFA’s petition opens by asking: “Should this Court overrule Grutter v. Bollinger... and hold that institutions of higher education cannot use race as a factor in admissions?”

In that landmark case, the Supreme Court ruled 5-4 in favor of the University of Michigan Law School’s use of race in admissions. The Court stated the university’s admissions policies pass the “strict scrutiny” test — the highest form of judicial review courts use when deciding the constitutionality of government discrimination. To that end, the Court ruled in Grutter that the law school’s use of race in admissions served a “compelling interest in obtaining the educational benefits that flow from a diverse student body” and was “narrowly tailored” to achieve that interest.

The Court’s answer to SFFA’s question would have implications reaching well beyond Harvard.

“This is, in my opinion, what SFFA has been hoping to be able to argue from the beginning – that Grutter should be overturned,” said Mishell B. Kneeland, a lawyer whose arguments in trial court were used to defend race-conscious admissions practices in the 2016 case Fisher v. University of Texas — the most recent case in which the Supreme Court upheld affirmative action.

SFFA’s lawyers argue in the petition that Grutter is “grievously wrong” because it violates the Equal Protection Clause under the Fourteenth Amendment. SFFA also challenges Grutter’s claim that diversity is a compelling justification for the use of race in admissions, citing various other Court rulings that argued the consideration of race did not satisfy strict scrutiny.

“This Court has held that racial classifications are legal if they satisfy strict scrutiny. But this Court often rejects interests as not compelling enough to justify racial classifications,” the petition reads. “Why these interests are not compelling–but ‘cross-racial understanding’ and ‘livelier classroom discussion’ are...—is impossible to explain. Grutter should have rejected these all-too-familiar justifications for sorting students by race.”

The “educational benefits” of race-conscious admissions that the Court identified in Grutter — such as combating racial stereotypes and preparing students for diversity in the workforce — are “suspect,” per SFFA.

SFFA also argues that Grutter has engendered “significant negative consequences,” such as sustaining admissions practices that stereotype Asian Americans and discriminate against those applicants.

University of North Carolina at Chapel Hill law professor Theodore M. Shaw said he believes SFFA is attempting to use concerns held by Asian American applicants as a vehicle to challenge affirmative action, and called the tactic “striking.”

Even if the Court chooses to uphold Grutter, SFFA called on the justices to overturn the lower courts’ rulings, which found Harvard’s admissions practices pass strict scrutiny.

SFFA’s lawyers alleged that Harvard’s use of race in admissions is not “narrowly tailored” to bring about educational benefits through student body diversity.

SFFA reiterated its long-standing argument that Harvard’s use of race in admissions is illegal because it allegedly discriminates against Asian American applicants, uses race as a determinative factor in admissions decisions, engages in racial balancing, and does not use race-neutral alternatives — actions the Supreme Court previously ruled are illegal.

In her 2019 ruling, Massachusetts District Court Judge Allison D. Burroughs ruled that Harvard was not culpable of all four counts. The First Circuit ruled that Burroughs did not err in her decision.

Despite SFFA’s assertion that the previous rulings in the case are incorrect, the Supreme Court must accept the lower courts’ findings unless the justices find those judges’ decisions “clearly erroneous.”

“The trial court makes findings. And those findings are based on the evidence that was offered at trial,” Berkeley law professor David B. Oppenheimer said. “The factual findings of the court are binding on the appellate court – the First Circuit – and on the Supreme Court, unless they find that the findings were clearly erroneous, they’re clearly incorrect. That’s a high standard for a court.”

In its effort to convince the justices to grant a writ of certiorari, SFFA made use of the Court’s previous language.

When arguing that Grutter is “grievously wrong,” SFFA makes use of a broad range of cases pertaining to race and discrimination on which the Court previously ruled.

“Legally speaking, Grutter has no foundations, ‘[g]iven how unmoored it was from the start,’” the petition quotes Kavanaugh.

The petition also cites Justice Clarence Thomas, who wrote in Fisher v. University of Texas that the Fourteenth Amendment’s Equal Protection Clause prohibits the use of race in higher education admissions.

“‘[E]very time the government places citizens on racial registers and makes race relevant to the provision of burdens or benefits, it demeans us all,’” the petition quotes Thomas.

In its critique of the educational benefits of a diverse student body identified in Grutter, SFFA quotes Justice Samuel A. Alito, Jr.’s 2016 opinion in the Fisher case.

“‘This is affirmative action gone wild,’” the petition quotes Alito.

By including their previous arguments, SFFA is directly appealing to justices who have articulated their opposition to the use of race in college admissions.

Oppenheimer said based on past cases, he believes three of the nine justices are “very clearly opposed” to affirmative action.

Several legal experts said they believe it is likely the Supreme Court will accept SFFA’s petition, which requires at least four of the nine justices to agree to hear the case.

“My first inclination is to tell you that it is a fool’s errand to ever attempt to predict with any purported certainty what the Supreme Court is likely to do,” Shaw said. “But it would be similarly foolish to ignore the fact that there’s been a change on the Supreme Court. This is the most conservative Supreme Court that I’ve seen, certainly, in my lifetime.”

Kneeland said the recently appointed conservative justices — Kavanaugh, Neil M. Gorsuch, and Amy V. Coney Barrett — are more likely to rule in favor of SFFA due to their strict interpretation of the Constitution.

“Most of the justices who are new have, in one way or another, implied – if not stated – that they don’t agree with so-called affirmative action,” Kneeland said. “They also are, many of them, originalists, and there’s a very strong appeal to originalism in this petition.”

Should the Supreme Court accept the petition, Oppenheimer said most legal experts following the case agree that the Court will rule in favor of SFFA. Still, the outcome remains “somewhat unpredictable,” he said.