‘Through the Baleen’ Review: Who Does Confusion Like Chris Fleming? 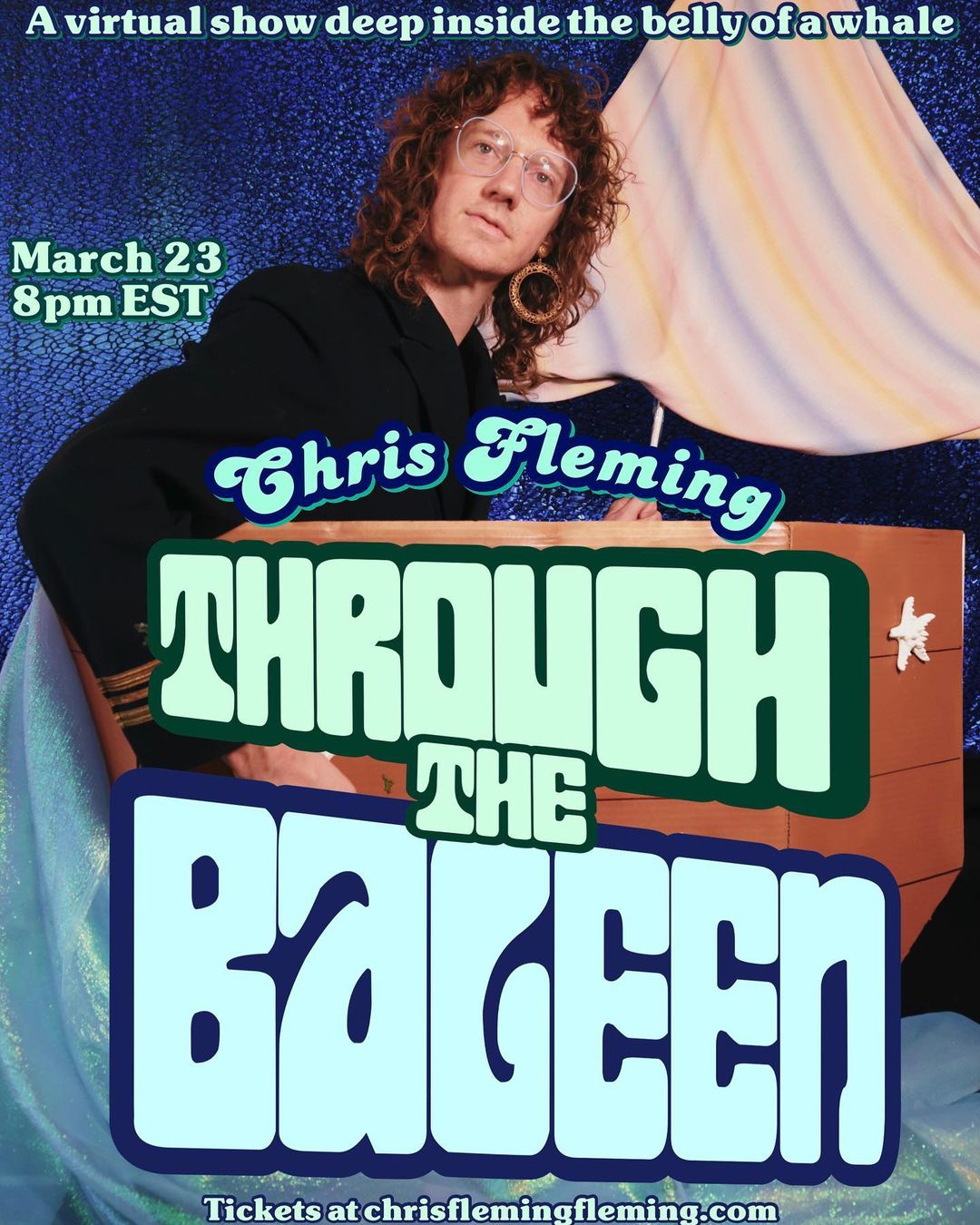 Internet comedian Chris Fleming’s latest live show, “Through the Baleen,” begins with a 30-second still shot of the strange, car wash-like maw of a baleen whale, backed by cheerful synth organ and what sounds like an autotuned groan tube. This would be an unfavorable starting point for any other performer, but for Fleming, it’s just another day.

“Through the Baleen” is magnificently devoid of any context, much like most of Fleming’s work. At the beginning of the online show, he informs the audience he is in the belly of a whale, which seems to be a purple room with several fish skeletons tacked up in a decorative manner. Off to the side, there is a small raised platform on which an audience of realistic life-sized krill sculptures sit in beach chairs, ready for use in the BuzzFeed quiz-style segment “Which Krill Are You?”

Buckle up. It only gets stranger.

Fleming spends the first half of this one-hour show telling stories about things too odd to happen in the real world and talking with inanimate objects, most notably the camera-shy groundfish Rory and the eminently bitchy octopus Jennifer, a recovering addict. The former is played by a bumpy black dome with wooden balls for eyes, the latter by a surprisingly versatile head made from pink Styrofoam, a blonde wig, eyelashes out of Trixie Mattel’s nightmares, and one moving tentacle. Both are voiced by Fleming; Jennifer exclusively makes low burbling sounds but is subtitled for the audience’s convenience. That both of them seem to almost come to life under Fleming’s ministrations is a testament to his comedic virtuosity.

Fleming has a wonderfully malleable face, remarkable in its ability to twist into different characters. His awkwardness is so intense that it twists back around into confidence. And his assortment of giraffe-like limbs might be the funniest thing about him. Physical comedy is Fleming’s game: He effortlessly transforms into Fupi, a fedora-wearing robot from the conspicuously uncool city of Albany, for a bit that deserves every second of its three-minute airtime.

The second half of “Through the Baleen” is equally strange and just as charming. As the host of “Which Krill Are You?”, Fleming joins a Zoom call with individual audience members and chats with them for a few minutes before assigning them a krill counterpart from his more crustaceous audience. A personal favorite is the Blazer With Jeans Krill. Fleming elaborates: “The universal uniform of a man trying and failing to have an affair. You stay at a lot of Marriotts and would have many more successful affairs if you didn’t go to Supercuts every single day.”

But it’s during the short chats themselves when a different side of Fleming peeks through: a personable, almost ‘normal’ side. One of the great dangers –– and also the great benefits –– of audience participation is that sometimes the audience member is funnier than the comedian. Though Fleming is never really shown up, there’s a noticeable shift into a much more comfortable, laid-back style of comedy, which serves the participating audience member just as much as, if not more than, it does him. It’s a simple truth: Most of us are at our best with other people. Realizing this as you watch, you will probably start to feel quite lonely. Embrace that. We’re almost through.

For those familiar with Fleming’s web series “Gayle,” in which he plays the titular suburban house-master Gayle Waters-Waters, don’t expect his live show to hit quite the same notes of New England absurdity. For those unfamiliar with “Gayle,” watch it –– it’s one of the best things on the Internet. His songs, also posted to YouTube, warrant similar praise. Standouts include “W.U.G.,” a discursive meditation on Wildly Unlikeable Guys, and the strangely tuneful “Sick Jan,” starring Fleming’s H&R Block tax preparer. Fleming’s live persona, uncondensed by his typical fast-paced editing, can at times seem like a much more bizarre, extreme version of his YouTube persona.

That said, “Through the Baleen” is very much worth watching, especially if you’re looking for a specific sense of pleasant bafflement not unlike the feeling of being gifted a macaroni necklace by an adult coworker. Be ready to pay total attention and still feel like you’ve missed the first 10 seconds of every bit. Remember: It’s Chris Fleming. The confusion is half of the fun.