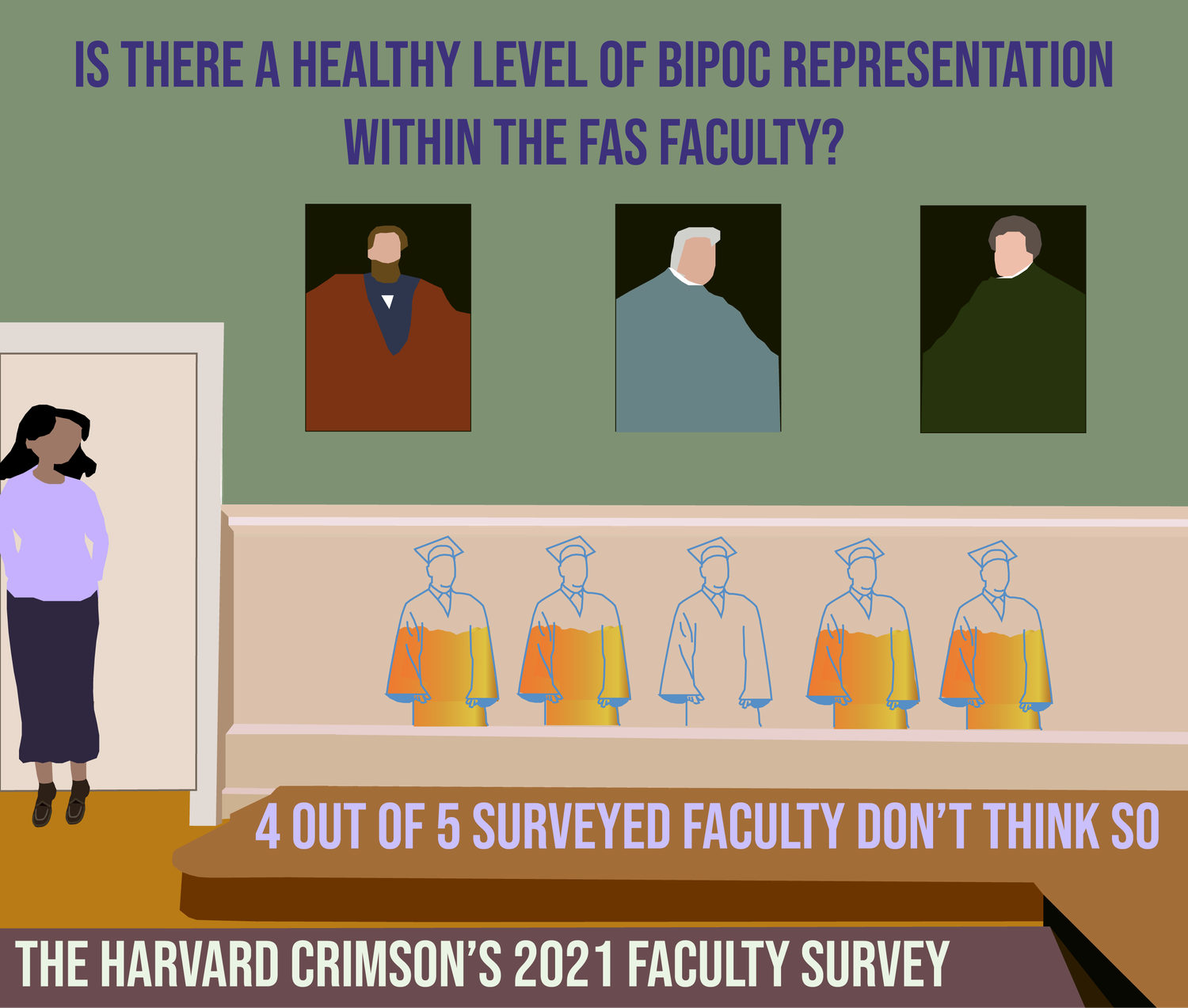 FAS Dean Claudine Gay recently said that questioning whether Black scholars can succeed at Harvard is “a legitimate question to ask of a University as old as ours, with a past represented rather instructively by the portraits on the walls of our Faculty Room.” By Meera S. Nair
By Meera S. Nair and Andy Z. Wang, Crimson Staff Writers

Eighty percent of surveyed members of the Harvard Faculty of Arts and Sciences said FAS does not have a healthy level of BIPOC representation within its ranks, including 50 percent of respondents who strongly disagreed that the faculty is sufficiently diverse.

Additionally, 65 percent of survey respondents said the FAS does not have a healthy level of female representation within its ranks, including 26 percent who strongly felt that way.

The Crimson distributed its faculty survey to more than 1,100 members of the FAS in late February, polling Harvard’s flagship faculty on key University policy decisions, challenges they face as academics, and pressing issues on campus — including the repercussions of the Covid-19 pandemic. Tenured, tenure-track, and non-tenure-track faculty all received the survey.

The 94-question survey obtained more than 300 responses, though not all respondents answered each question. The anonymous survey, a link to which was emailed to nearly every member of the FAS, was open from Feb. 26 to March 5. The Crimson did not adjust the data for possible selection bias.

The first and second installments of The Crimson’s 2021 faculty survey series explored faculty perspectives on the University’s tenure procedures and Harvard’s response to divestment movements on campus, respectively. This third installment examines how faculty view Harvard’s climate and culture, as well as Title IX issues within the FAS.

Representation Among the Faculty

The ranks of Harvard’s FAS have grown more diverse in both gender and race over the past decade. According to the latest report from the Office of the Senior Vice Provost for Faculty Development and Diversity, 15 percent of appointments to both tenure-track and tenured positions made between 2017 and 2021 have been underrepresented minorities.

Despite Harvard’s progress in new appointments, the faculty at large remains largely white. Eight percent of tenured faculty and 13 percent of tenure-track faculty today identify as underrepresented minorities, compared to five percent and 11 percent in 2007, respectively.

Sixty-five percent of respondents disagreed that Harvard has a healthy level of female representation within the FAS. However, opinions differed based on respondents’ gender identity.

During a faculty meeting earlier this month, FAS Dean Claudine Gay reaffirmed FAS’s commitment to a diverse faculty while also acknowledging the slow nature of institutional change. She emphasized that while the diversity statistics have indicated some growth in Harvard’s recruitment and promotion of faculty of color, there is still room to improve in creating an academic environment where these faculty “can thrive.”

Gay added that, especially following the recent tenure controversy regarding Cornel R. West ’74, she and other Harvard faculty have been asked “whether Black scholars can succeed at Harvard,” which she described as “a legitimate question to ask of a University as old as ours, with a past represented rather instructively by the portraits on the walls of our Faculty Room.”

“Harvard as a place where Black scholars can succeed is what we are committed to as an institution. It’s the future we need and are striving to build, and getting there has my full attention,” Gay said. “I will be the first to admit to sometimes feeling frustrated by the slow pace, but I also know that change that lasts takes time to create.”

Harvard’s efforts to prevent sexual harassment have come under scrutiny in recent years, with several prominent faculty being accused of sexual misconduct towards students or colleagues.

The survey results underscored that harassment remains a prevalent problem in the FAS, despite the school’s efforts to address climate and culture issues. A little more than a quarter of survey respondents said they know someone in their department who has experienced sexual harassment, though responses differed based on respondents’ disciplines.

Thirteen percent of respondents from the School of Engineering and Applied Sciences said they knew of someone in their department who had experienced sexual harassment, compared to 18 percent in the Arts and Humanities, 30 percent in the Social Sciences, and 38 percent in the Sciences.

In February, an external review committee found that decentralized sexual- and gender-based harassment resources at Harvard — among many other factors — prevented the University from effectively censuring Government professor Jorge I. Domínguez despite sexual harassment claims spanning four decades.

In the wake of the report, Harvard announced last week that the University’s Title IX Office and Office for Sexual Assault Prevention and Response would be consolidated into a new Office for Gender Equity managed by the University administration.

A majority of survey respondents — 60 percent — said they believe the Harvard Corporation, the University’s highest governing board, should revoke the tenure of faculty members who are found guilty of sexual misconduct by the Office for Dispute Resolution. Thirty-one percent strongly agreed.

While the FAS Dean can sanction a faculty member for violating the sexual harassment policies, including by revoking his or her emeritus status, only the Corporation can revoke tenure altogether, a move not seen for several decades.

Faculty respondents held varying levels of comfort in approaching the FAS Office for Faculty Affairs — which supports faculty in their workplace issues — with concerns. A little more than a third of respondents overall indicated they held qualms about approaching Faculty Affairs, and 44 percent of female-identifying respondents said they were somewhat or strongly uncomfortable with doing so.