Thirty-five percent of respondents to The Crimson’s annual survey of Harvard’s Faculty of Arts and Sciences said they believe at least one colleague in their department was unjustly denied tenure, with a quarter indicating they “strongly believe” an unjust tenure denial had occurred.
By Meera S. Nair and Andy Z. Wang 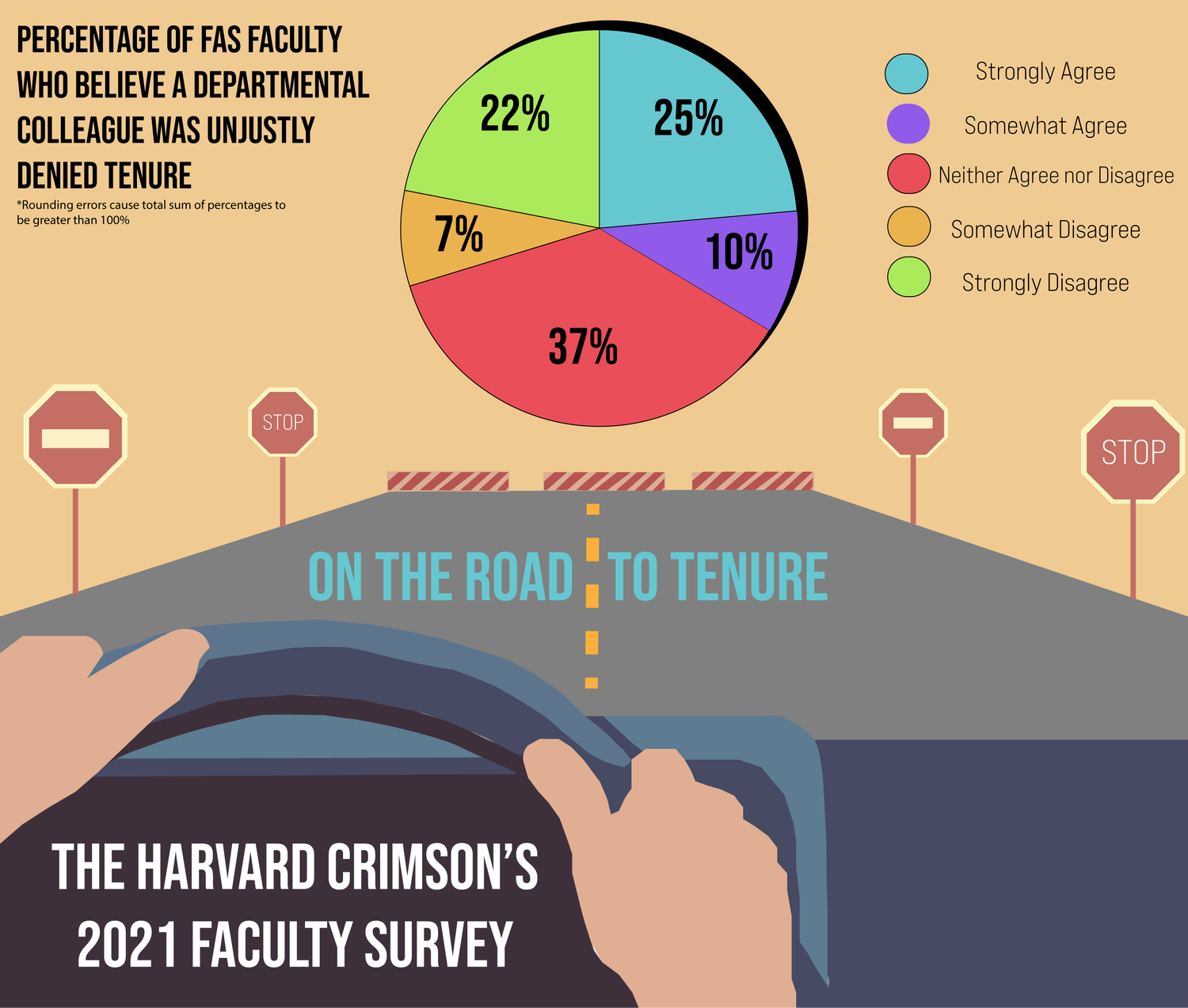 Thirty-five percent of respondents to The Crimson's annual survey said they believe at least one colleague in their department was unjustly denied tenure, with a quarter indicating they strongly By Meera S. Nair

Thirty-five percent of respondents to The Crimson’s annual survey of Harvard’s Faculty of Arts and Sciences said they believe at least one colleague in their department was unjustly denied tenure, with a quarter indicating they “strongly believe” an unjust tenure denial had occurred.

The University’s tenure procedures recently came under fire again after Professor Cornel R. West ’74 said in February that the University initially denied a request to consider him for tenure, prompting his announced departure to Union Theological Seminary.

FAS Dean Claudine Gay launched a review of the FAS’s tenure processes in December 2019. In an interview with The Crimson in March, Gay said that the review’s findings are expected to be released later this spring.

The Crimson distributed its faculty survey to more than 1,100 members of the FAS in late February, polling Harvard’s flagship faculty on key University policy decisions, challenges they face as academics, and pressing issues on campus — including the repercussions of the Covid-19 pandemic. Tenured, tenure-track, and non-tenure-track faculty all received the survey.

The 94-question survey obtained more than 300 responses, though not all respondents answered each question. The anonymous survey, a link to which was emailed to nearly every member of the FAS, was open from Feb. 26 to Mar. 5. The Crimson did not adjust the data for possible selection bias.

What Leads to Tenure?

Harvard often cites teaching and research as core tenets of its mission, but faculty responses to the survey indicate that research is the much stronger consideration in tenure cases. Asked what they believe was the primary factor for their tenure, fewer than two percent of respondents who indicated they were tenured faculty named teaching — whether graduate or undergraduate — as the most important factor. In contrast, 86 percent of tenured respondents said they believed research played the biggest role in Harvard’s decision to grant them tenure.

Among survey-takers who identified themselves as associate or assistant professors, 40 percent indicated the FAS has not given them enough flexibility to choose how to allot their time between research, teaching, and mentorship.

Non-tenure-track faculty respondents were not posed this survey question. However, earlier this month, the FAS Preceptor System Review Committee — charged last year with recommending changes to the roles of preceptor and senior preceptor — released a final report that framed preceptors and senior preceptors’ roles as purely teaching positions. This distinction spurred disappointment among preceptors who highlighted the necessity of research credentials to apply for jobs after Harvard. In an emailed statement earlier this month, Dean for Faculty Affairs and Planning Nina Zipser wrote that preceptors “are hired to teach not to conduct research.”

Forty-three percent of all surveyed faculty indicated they were somewhat strongly, strongly, or very strongly considering job offers they had received from outside of Harvard. Among the non-tenure-track faculty who responded to the survey, this number increased to 58 percent.

While about a quarter of respondents overall said they strongly believe at least one colleague in their department was unjustly denied tenure, opinions differed based on respondents’ disciplines.

Seventeen percent of respondents in the Sciences division strongly agreed at least one departmental colleague was unjustly denied tenure, compared to 22 percent in the Arts and Humanities, 29 percent in the Social Sciences, and 39 percent in the School of Engineering and Applied Sciences.

Surveyed faculty overwhelmingly supported the FAS review of tenure procedures, which launched in January 2020 and is set to conclude this spring: over three-quarters of respondents agreed with Dean Gay’s decision to form the committee. Notably, however, the committee is not reviewing the use of ad hoc committees within the process because they take place at the University-level.

Junior faculty members pursuing tenure spend seven to eight years managing a rigorous teaching and advising schedule combined with independent research. At the end of this period, junior faculty hopefuls go through several rounds of evaluation by their peers, during which time they may be recommended for tenure by their department.