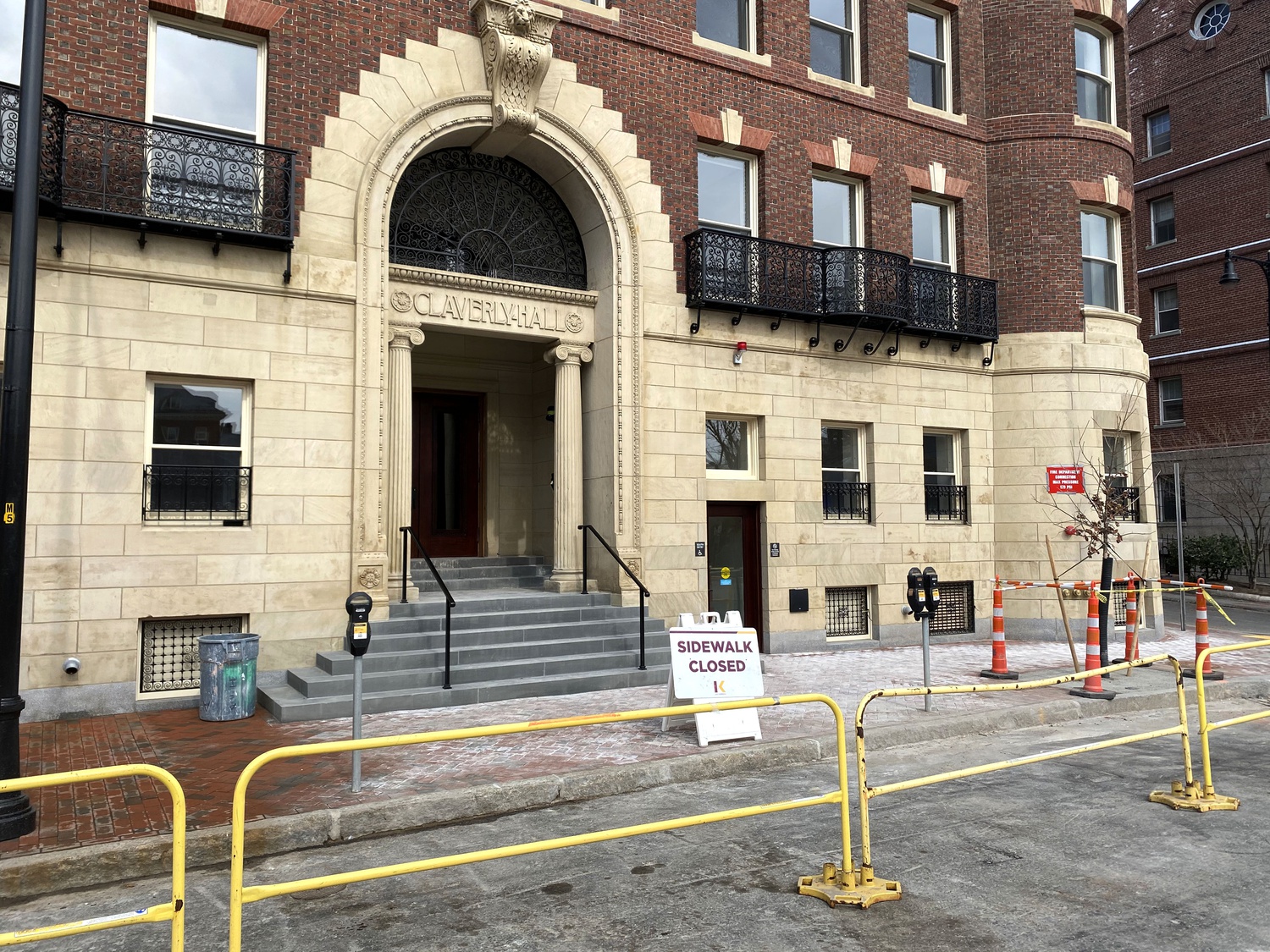 Harvard completed the first phase of its Adams House Renewal Project — renovations to Claverly Hall — earlier this month. Though the exterior of Claverly remains the same, the interior has seen a significant overhaul. By Lara F. Dada
By Hannah J. Martinez and Sixiao Yu, Crimson Staff Writers

Boasting an improved ventilation system and expanded dining spaces, renovations to Claverly Hall of Adams House wrapped up earlier this month, marking the end of the first of three phases of the House’s renewal project.

The completion of Claverly Hall — which was originally slated to finish in August 2020 — comes nearly a year after the project was temporarily suspended due to a city-wide construction moratorium implemented in wake of mounting fears of coronavirus spread. Work resumed after a five-month hiatus in August 2020.

Before the pandemic, the Adams House Renewal Project was scheduled to span four years and three distinct phases, ultimately concluding in fall 2023. Due to the unforeseen delays, however, the project will now tentatively be complete in 2025.

Randolph Hall will undergo the next phase of construction after Apthorp House — the 260-year-old faculty dean residence — is finished this summer. Construction on Westmorly Hall and Old Russell Hall will ensue shortly thereafter.

Adams House Faculty Dean John G. “Sean” Palfrey ’67 said in an interview last week that, though Harvard began the architectural plan about four years ago, the process of renovating the entire House is expected to take six or seven years.

“We have actually completed the architectural plans. They’re spectacular,” Palfrey said. “But because of Covid, and because of the fact that this is three blocks of Cambridge, and there are all sorts of other complications, we have just completed — or in a week or two — will complete Claverly, which is the first block.”

“We have our own internal team, we have the contractors, and then we have the architects — we all worked together to come up with a plan, so we were able to restart the project in the summer,” he said. “And rather than finish around November, we finished in March.”

Palfrey described the interior of the renovated Claverly Hall as “shiny and lovely.”

“Everything outside will look as it did before,” Palfrey said. “Inside, however, will look modestly different in Claverly in that it will be shiny and smooth, and the floors redone, and the woodwork redone, and the stairwell and the skylight redone.”

Palfrey noted that the renovations done on Claverly Hall will make the building more accessible to students with disabilities.

“Claverly will have three elevators in it, and it only had one elevator about the size of a peanut before,” he said. “The other houses will also have elevators and things, because there was essentially no square inch of Adams House which was handicapped accessible before. And it will be completely accessible after we’re done with the renovation.”

Esther J. Xiang ’23, who has been living on campus in Adams House, said she believes the character of Adams House has been preserved throughout the renovation process.

“I’ve seen so many pictures, and it’s so beautiful,” she said. “The character of Adams hasn’t changed. It hasn’t been lost at all. You still get the Adams feel, which is really great.”