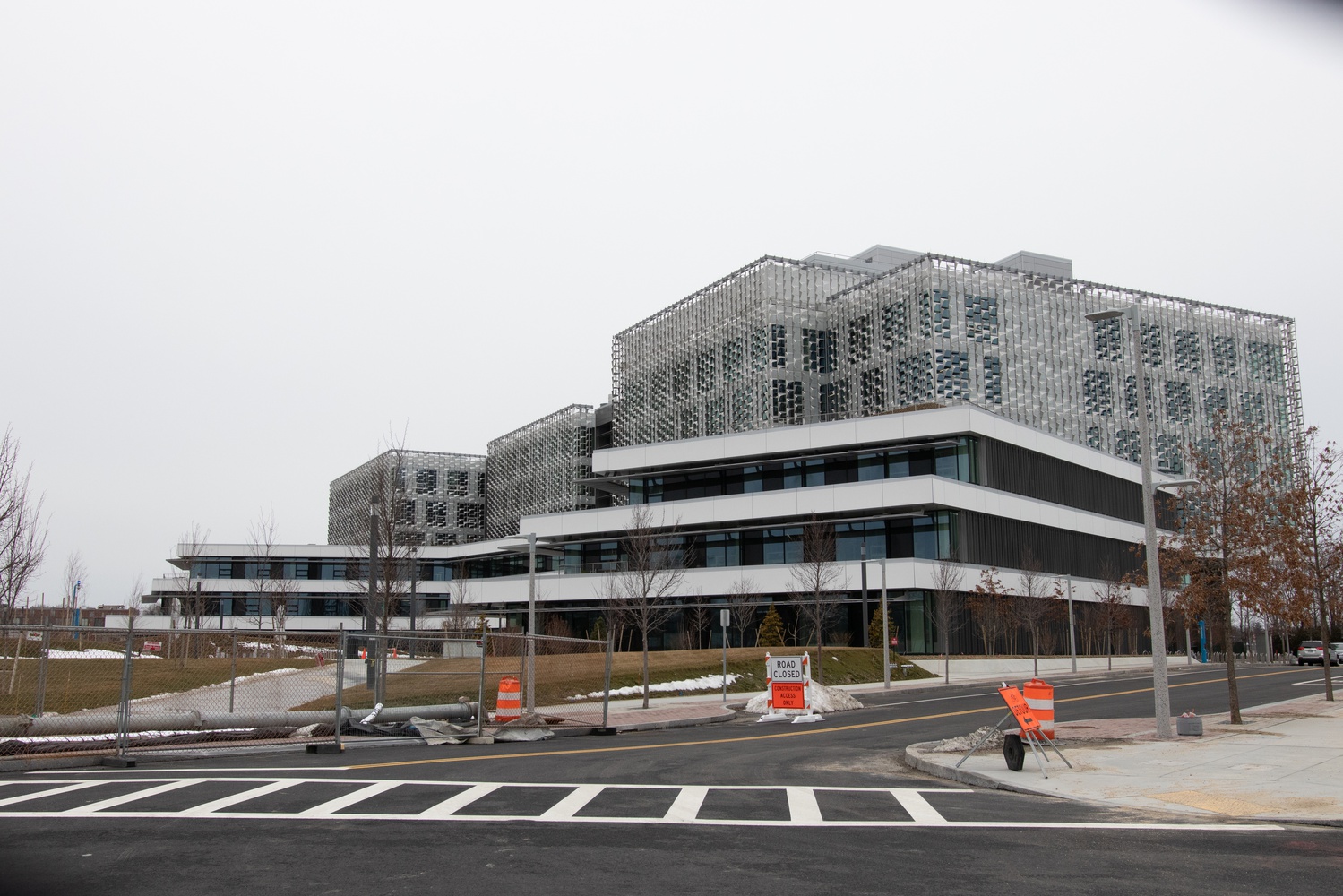 Harvard's Science and Engineering Complex at 150 Western Avenue in Allston was awarded two top awards for sustainability ahead of its full opening to students in fall 2021. By Anne M. Foley
By Natalie L. Kahn and Simon J. Levien, Crimson Staff Writers

The 544,000-square-foot SEC — the new School of Engineering and Applied Sciences headquarters scheduled to fully open for students in fall 2021 — is certified LEED platinum as part of Harvard’s ongoing Sustainability Plan to be fossil-fuel neutral by 2026 and fossil-fuel free by 2050.

LEED is a “globally recognized symbol of sustainability achievement and leadership,” according to the United States Green Building Council, which spearheads LEED certification. The SEC received LEED’s highest rating, platinum, measured by various metrics of sustainability and resource efficiency.

The SEC is also the largest building in the United States to receive Petal certification from the Living Building Challenge, according to Vivien Loftness, the former head of the School of Architecture at Carnegie Mellon University who works for the program. To receive Petal certification, the SEC had to pass three sustainability performance areas, or “petals,” monitored over the course of a year.

Loftness noted the Materials petal — one of the three received by the SEC — is the “hardest petal to earn.” The SEC also received the equity and beauty petals.

“The goal is to actually create the greenest buildings possible for a healthy world, and in a sustainable climate, and this is a great example,” Loftness said.

Heather A. Henriksen, managing director of the Harvard Office of Sustainability, noted at a Tuesday press briefing that the certification was facilitated through the Public Building Academy — a partnership among the Sustainability Office, SEAS, and the School of Public Health started in 2016 — which now also advises external projects.

“The idea was to have our faculty advise us on how do we address these toxic chemicals of concern,” Henriksen said. “How does Harvard actually use our purchasing power to start to do something?”

Henriksen explained that the Building Academy subsequently partnered with companies like Google and Kaiser Permanente to represent over 3 million square feet of real estate in an effort to attain healthier products for the buildings in lieu of toxic or environmentally damaging chemicals.

Loftness said the University involved a coalition of faculty in selecting and evaluating materials.

“Such an incredibly positive thing to do is to tie together your facilities group with your education and research faculty and students, and so this is truly an impressive project,” she said.

She added that she believes the process has the potential to “transform practice” in other educational institutions and manufacturers.

Henriksen said she also believes the scale of the building required rethinking the whole design process, which she referred to as “radically different.”

“Aligning your project team, from architect to engineer to contractors, subcontractors – it’s just really changing the way that people work,” she said.

University Executive Vice President Katherine N. Lapp said in the press release that the SEC epitomizes the University’s efforts to move toward sustainability.

“The SEC is a centerpiece of the University’s mission to create a healthier, more sustainable campus,” Lapp said. She added that “our shared vision” on sustainability has led to changes in the “broader supply chain” to support green buildings internationally.

University President Lawrence S. Bacow said in the press release that he lauded the SEC’s design and looks forward to its fall 2021 debut.

“It brings beauty, practicality, and sustainability into harmony, a symbol of the University’s commitment to making the world better as we undertake our best work,” Bacow said. “Celebrating its opening—and heralding the arrival of our SEAS faculty and students—cannot come soon enough.”