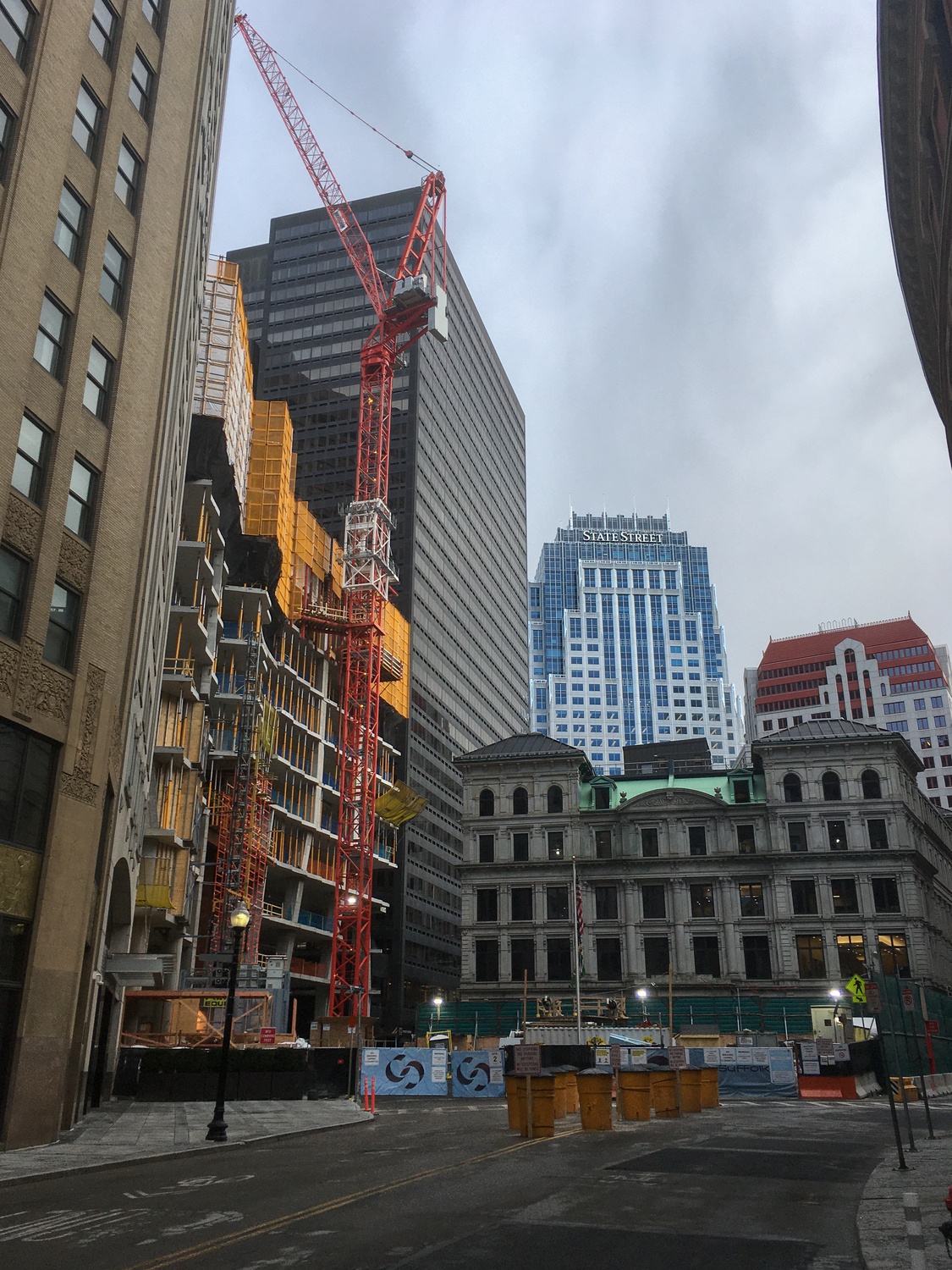 Construction continues on High Street in downtown Boston. High Street was the site of a deadly construction accident in late February, prompting outrage over the lack of safety measures for utility workers. By Santiago A. Saldivar
Advertisement
Advertisement

Just after 8:00 a.m. on Feb. 24, a truck reversed into two utility workers at a construction site on High Street in downtown Boston, knocking them into a 20-foot-deep trench. Jordan Romero, 27, and Juan Carlos Figueroa Gutierrez, 33, were pronounced dead shortly thereafter.
By Charlotte S. Baker and Meimei Xu

Just after 8:00 a.m. on Feb. 24, a truck reversed into two utility workers at a construction site on High Street in downtown Boston, knocking them into a 20-foot-deep trench. Jordan Romero, 27, and Juan Carlos Figueroa Gutierrez, 33, were pronounced dead shortly thereafter. The men, who were employed by Atlantic Coast Utilities, had been repairing the sewer line connecting to Boston Water and Sewer Commission’s main sewer.

Massachusetts Coalition for Occupational Safety and Health Executive Director Jodi E. Sugerman-Brozan says the accident was “eerily similar” to another tragedy in 2016, in which two men employed by Atlantic Drain drowned on a job in the South End when a hydrant line collapsed and filled the trench they were working in with water. The owner of Atlantic Drain Service Co., Kevin Otto, failed to provide adequate support and safety materials for the workers, according to the Occupational Safety and Health Administration. Suffolk County Superior Court found Otto guilty of two counts of manslaughter.

Sugerman-Brozan calls these workplace deaths and injuries “preventable tragedies.” According to Sugerman-Brozan, the steps required to ensure worker safety are already apparent. For example, OSHA and the OSH Act provide regulations meant to prevent workers from being harmed by vehicles on site.

But it’s clear that despite comprehensive legislation, companies such as ACU and Atlantic Drain are slipping through the cracks. The recent tragedy prompted swift action: In a statement on Twitter, Boston mayor Martin J. Walsh announced the suspension of Atlantic Coast Utilities’ other worksite in Boston and barred the company from working in the city until the investigations launched by the Suffolk County District Attorney’s Office and OSHA have concluded. The effect of the suspension on ACU’s employees who were working in Boston is unclear.

“The purpose of an OSHA inspection is to determine which workplace safety or health standards apply in this situation and whether or not the employer complied with those standards,” OSHA wrote in an emailed statement.

The Crimson attempted to contact ACU multiple times for comment on this story, but could not reach a representative due to a full voicemail box.

Soon after the investigation began, more information about contributing factors to the accident arose. ACU’s owner Laurence M. Moloney did not report any OSHA citations in contractor affidavits in 2019 and 2020, even though the company had allegedly incurred five safety violations. According to the OSHA inspection detail, OSHA alleges one willful and four serious safety violations against the company.

An OSHA spokesperson added in the emailed statement that the administration cannot disclose specific information about ongoing inspections.

Officials are still trying to determine how the tragedy occured. “How do you get a permit in the city of Boston? That is the $1,000 question right now,” Sugerman-Brozan says. For Boston City Councilor Ed M. Flynn of District 2, investigating the vetting process and ensuring that construction companies are providing “accurate, updated information” and “value the safety of their workers” is a priority. On March 3, Flynn and other city councilors called for a hearing on construction site safety in the city and existing vetting procedures.

After the 2016 Atlantic Drain Service tragedy, Walsh filed an ordinance that requires companies applying for work permits to swear by their workplace safety history and gives the city the power to revoke permits based on past safety violations or concerns. Named for the two employees who died, the Mattocks-Higgins affidavit is now one of many required forms for companies applying for a construction permit.

In an emailed comment, a city spokesperson wrote that companies are also required to produce a Covid-19 safety plan and Covid-19 safety affidavits for a construction permit as of May 2020.

Nonetheless, Boston City Councilor At-Large Michael F. Flaherty calls the existing ordinance “lax.” The main shortcoming of the ordinance, according to Flaherty, is its lack of punitive power for companies that lie about their workplace safety histories. “In a way, we’re relying on companies to be forthcoming with no prescribed penalty code,” he says.

During a WBUR segment on March 4, Flynn said “there should be zero excuses for a company such as Atlantic [Coast Utilities] getting any type of project in the city of Boston.”

Another issue lies in the current certification process for companies bidding for contracts on state building projects, Sugerman-Brozan says. The Division of Capital Asset Management and Maintenance — an agency that oversees Massachusetts capital projects — approves contractors to receive a permit for construction. Per state courts, public bidding laws aim to “obtain the lowest cost that fair competition can achieve to protect and preserve taxpayers dollars.”

According to Sugerman-Brozan, companies successfully bid for contracts because they can offer the lowest bids.

“They cut corners, so they’re the lowest bid,” Sugerman-Brozan says. “It really is an unfair process by which those who are doing right by workers and health and safety are not on a level playing field.”

Sugerman-Brozan says Massachusetts Coalition for Occupational Safety and Health currently wants to find out which contractors approved by DCAMM have OSHA and wage and hour violations.

A DCAMM spokesperson did not respond to questions about the bidding process.

Prior to the certification of Atlantic Coast Utilities, Moloney, in 2008 — who at the time owned construction company Shannon Construction — pleaded guilty to not paying workers a prevailing wage and overtime, as well as failing to provide accurate payroll records. Boston Municipal Court forced Moloney to pay wages totaling $210,000 to 70 workers, in addition to $90,000 in fines.

He discusses the ways in which workers — particularly undocumented workers — are vulnerable to mistreatment and exploitation at construction sites.

“It's not a separate issue,” Flynn adds. “When you cut one corner to make things easier for you, you often try to continue cutting corners.”

In addition to undocumented workers, Sugerman-Brozan says workers not represented by a union are more vulnerable to exploitation and may not have access to information about their rights.

According to Sugerman-Brozan, worker safety issues have also been exacerbated by insufficient safety regulations preventing airborne transmission of Covid-19. She cites a study published in the American Journal of Industrial Medicine this month of Covid-19 death certificates, which concluded that workers in 11 specific occupations — including construction and extraction — died from Covid-19 at higher frequencies than workers in other fields.

According to Flynn and Flaherty, the City Council will announce the date of the hearing soon. In the hearing order, Flynn called for representatives from the Massachusetts Coalition of Occupational Safety and Health, as well as the Inspectional Services Department and the Boston Police, to testify.

Action is also being taken at the state level: Representative Michelle M. Dubois, a Democrat of Plymouth, and Senator Paul R. Feeney, a Democrat of Bristol and Norfolk, introduced a bill to require companies looking to contract with Massachusetts to disclose safety violations, which would effectively extend the Mattocks-Higgins affidavit process beyond Boston. Sugerman-Brozan says she is hoping the bill will pass.

She is also hopeful that Moloney will be charged criminally to “set an example” for other companies.