‘The Pink Unicorn’ Review: The Learning Curve of Love 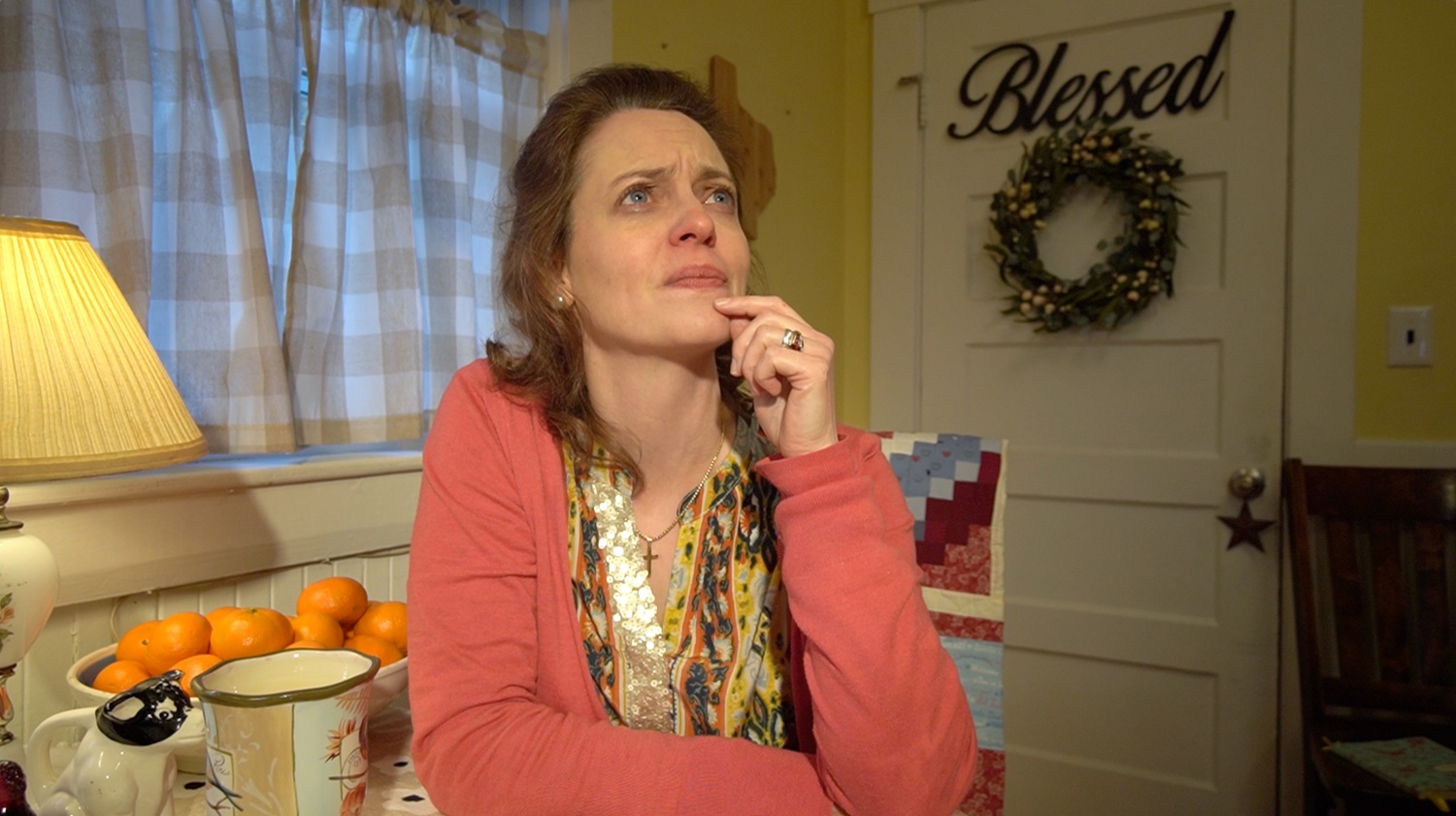 "Is this how everybody who is different feels?" asks Trisha Lee, a white religious working-class widow and the titular character of the SpeakEasy Stage Company’s “The Pink Unicorn.” “Sittin’ at a table with not one person you can relate to or connect with, like you ain’t never gonna be understood, like nobody is ever gonna hold you and love you for who you are? It is the loneliest feeling in the world,” she concludes. Trisha, played by Stacy Fischer, is forced to reckon with her own beliefs and values when her teenager, Jo, comes out as genderqueer. Trisha becomes a determined ally, and armed with Wikipedia, takes on the local church and Jo’s conservative high school. “The Pink Unicorn” is streaming through March 18.

From the beginning, the performance is welcoming and intimate. Trisha sits in a cozy kitchen with a sign reading “BLESSED” hanging over the door. She speaks directly to the viewer, creating the illusion that you are sitting in her kitchen as she recounts her story. The warm lighting, flower-patterned tablecloth, and checkered curtains create an environment that feels less like a staged play and more like a conversation between friends, and it’s easy to be drawn into Trisha’s world. The production subtly communicates that, while large displays of activism can be effective, intimate conversations like these are just as important.

Fischer also embodies Trisha’s sharp, scathing humor with deftness. While Trisha is initially polite and straight-laced, she soon reveals herself to be opinionated, scathing, and petty. At one point, Fischer adopts an ultra-masculine, swaggering persona as she imitates her local pastor’s brash, homophobic tirades. The pastor’s name? Pastor Dick.

The play’s lightheartedness is matched by moments of introspection. Trisha’s evocative descriptions of her own relationship with gender as a child take the viewer on an emotional journey far beyond her kitchen. While asking herself how Jo could possibly be genderqueer, as they had not exhibited any gender-nonconforming behaviors as a child, Trisha reveals that she herself had once reveled in expressing herself in some conventionally masculine ways. As she describes climbing trees and taking off her shirt to play, her voice rises and she gesticulates, so much more animated than the prim, proper housewife she normally appears to be. Trisha asks herself, “Who would I be now, if I had kept my boy close?” It’s a moment of wistful regret, of unresolved what-might-be. Trisha’s nostalgia speaks to a topic not often discussed: If older people had had the same words and tools as younger generations, would they have come out, too?

Ultimately, the show’s greatest contribution is the empathy it affords Trisha. Her narrative provides a window into the other side of a coming-out story: the confused parent struggling to understand their child’s identity (or identities), while trying to protect them. In real life, it may be easy to dismiss parents like Trisha as small-minded. But, by giving Trisha the stage, the production not only explores the messiness that can come with such a disclosure but also encourages audiences to understand and empathize with Trisha, as well as Jo.

Unfortunately, along with these heartfelt moments, the play is also plagued by instances of fatphobia and ableism. Trisha takes every possible opportunity to ridicule Enid, an older lesbian activist. She also belittles another character’s speech and use of a wheelchair, and only recants these jabs after the character is revealed to be a skilled community organizer. The performance’s lack of other viewpoints means that Trisha’s comments go unquestioned, and an uncomfortable contradiction exists: While Trisha moves slowly closer towards supporting her child’s identity, she blithely continues to ridicule other marginalized groups. Without another voice to counter her, the show runs the risk of elevating certain marginalized voices at the expense of further belittling others.

Trisha also misgenders Jo throughout the play, only using their correct pronouns in the show’s last four minutes. She also only does this after giving a sardonic little smile — as though to let the audience know it’s difficult for her. The catalyst for this shift is unclear, and feels more like a narrative device to show that Trisha is “changing” than the product of any internal realization. This has the potential to make audiences feel uncomfortable and alienated. Admittedly, SpeakEasy Stage Company includes a content advisory for transphobia, misgendering, ableist, and fatphobic language on its ticketing website. However, this misgendering directly flies in the face of the play’s attempts to create a theatrical space for kindness and understanding.

In the last minutes of the play, a disembodied voice yells “Mom!” out of range of the camera. Trisha smiles and gets up to help her child, and the play ends happily. However, this line relegates Jo to a symbol, rather than a flesh-and-blood person. One wonders what possibilities might have arisen had Jo been given a voice alongside Trisha. Instead, they are relegated to a symbol of their mother’s personal growth.

Overall, “The Pink Unicorn” spotlights a perspective less often heard, and raises important questions about the obligations of parents who have BGLTQ children. However, this is also the play’s greatest weakness: by centering a non-BGLTQ person and allowing her complete authority over the telling of her BGLTQ child’s story, these messages of empathy and kindness often feel hollow.