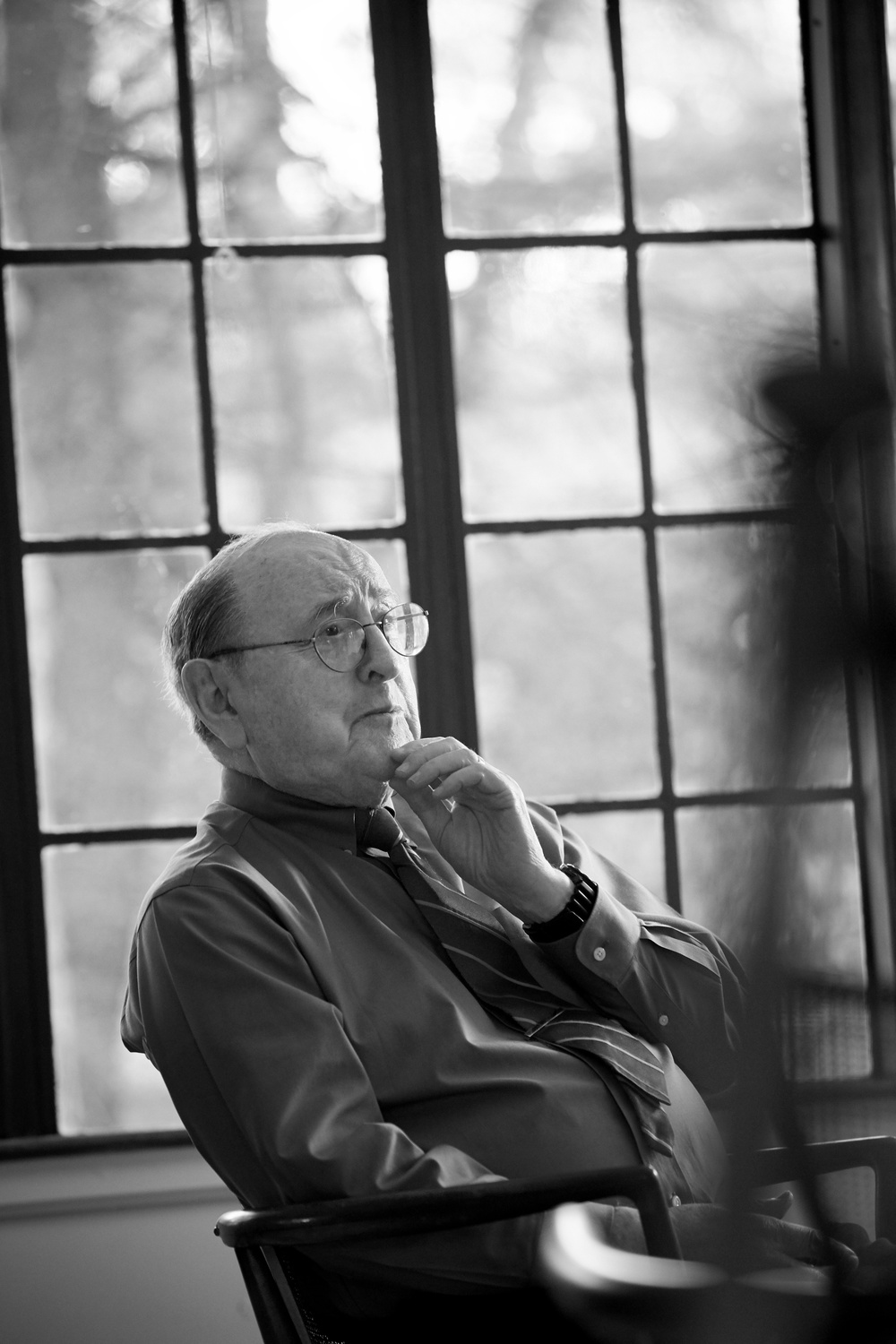 Bernard Lown, a professor of cardiology at the Harvard School of Public Health and a physician at Brigham and Women’s Hospital, was a recipient of the Nobel Peace Prize in 1985. By Courtesy of Kent Dayton
By Alexandra Topic, Crimson Staff Writer

Bernard Lown, whose life’s work spanned from pivotal breakthroughs in medicine to humanitarian efforts against nuclear war that won him the 1985 Nobel Peace Prize, died at age 99.

Lown died Feb. 16 of complications from congestive heart failure, according to his son Fredric Lown, after a decades-long academic career serving as a professor of cardiology at the Harvard School of Public Health and a physician at Brigham and Women’s Hospital. Lown is survived by his three children, Fredric, Anne, and Naomi. His wife, Lousie Lown, died in 2019.

“He was a force of nature,” said longtime colleague Joseph D. Brain, a professor of environmental physiology at HSPH.

Born in Lithuania in 1921, Lown immigrated to Maine with his family in 1935. He graduated from the University of Maine with a Bachelor’s degree in Zoology in 1942, and received his MD from Johns Hopkins University in 1945. He then went on to pursue a cardiology fellowship at Brigham and Women’s Hospital, which became his home as a physician.

At a young age, Lown gained notoriety for his work in cardiology, which focused mainly on sudden cardiac death.

In 1951, Lown and his colleague Samuel A. Levine discovered that sitting up or walking after a heart attack leads to significantly better outcomes for patients than bed rest, which was the convention at the time. Without Lown’s co-invention of the modern defibrillator a decade later, surgeons would not have had a dependable way to restart a patient’s heart after surgery.

In 1965, Lown opened one of the first coronary care units, which are devoted to the care of patients who have suffered heart attacks, at Brigham Hospital. According to Marshall A. Wolf ’58, former director of the Brigham’s medical residency programs, Lown’s unit brought mortality down by a third — “a huge reduction.” With this success, Lown’s CCU became a model for other hospitals.

Lown did “less to the patient and more for the patient,” according to Goodarz Danaei, a professor of cardiovascular health at HSPH.

This approach was one he passed down to his medical students.

Lown also believed it was important to encourage young physicians to be involved in social activism.

In a 1990 discussion at Harvard Medical School, Lown told future doctors they had a responsibility to be vigilant of nuclear war.

“We doctors have an enormous responsibility to heal humankind,” Lown said. “I believe that each of you has the capability to prevent nuclear war by not being afraid of social involvement.”

Brain said Lown saw the threat of nuclear war as “not just an isolated political problem,” but instead, “something that would affect his patients and patients and people all over the world.”

In 1980, against the backdrop of the Cold War, Lown and Soviet cardiologist Evgeni Chazov founded the group International Physicians for the Prevention of Nuclear War.

“This was the greatest political issue of our time, because it didn’t just mean the death of an individual, but the death of multitudes,” Lown said at the first IPPNW World Congress in 1981. “Why would doctors not get involved?”

In his 2008 memoir “Prescription for Survival,” Lown wrote, “I risked credibility and even retribution when I joined forces with a perceived enemy to contain the unparalleled terror of nuclear war. The enemy became a friend, and together we launched a global movement.”

This movement earned the IPPNW the 1985 Nobel Peace Prize, which Lown and Chazov accepted on the group's behalf.

Fredric Lown said his father deeply believed “no one geographic area could be successful at the expense of others.” This vision formed the basis for the Lown Scholars program, which his son said was his main focus in the last years of his life.

Lown established the Bernard Lown Cardiovascular Scholars Program at HSPH in 2008. The program trains physicians who live and work in developing countries, and Danaei — the faculty director of the Lown Scholars Program — said Lown predicated the entire program upon the betterment of healthcare across the globe.

Lown was “always impatient” to tackle global challenges, and “there were always things that he wanted to achieve,” according to Brain.

“Even at age 99, rather than resting on his laurels, he was thinking of what should be done and what could be done,” Brain said.

Despite his constant efforts to identify and confront the world’s biggest challenges, Lown expressed optimism in his “Prescription For Survival.”

“Great as the present danger is, far greater is the opportunity,” Lown wrote. “While science and technology have catapulted us to the brink of extinction, the same ingenuity has brought humankind to the frontier of an age of abundance.”

A previous version of this article misstated the title of Lown's book “Prescription For Survival.”

—Staff writer Alexandra Topic can be reached at alexandra.topic@thecrimson.com.