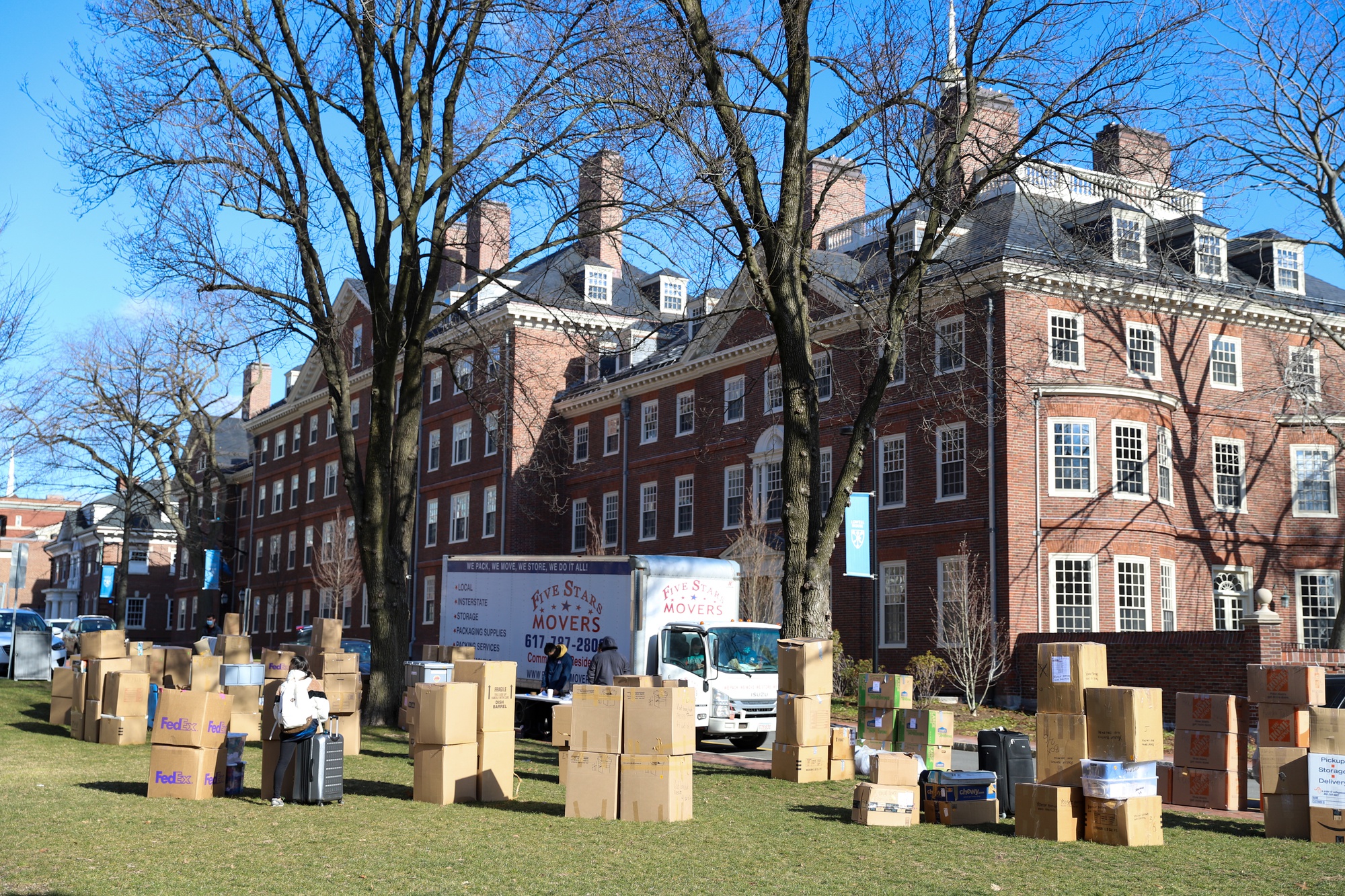 By Hannah J. Martinez and Taylor C. Peterman, Crimson Staff Writers
Harvard students moved back in this week to a campus drastically modified for the coronavirus pandemic. By Ryan N. Gajarawala

When she lived on campus, Julia Welsh ’23 spent most of her time focusing on classes and hanging out with friends.

Once the coronavirus upended her collegiate life, Welsh, who has lived at home in Philadelphia this past year, took on a slew of responsibilities outside of her coursework, including supporting her family financially, buying groceries, and completing household chores.

Overwhelmed, Welsh said she was forced to prioritize her obligations to her family over her academics, prompting her to drop one of her fall courses.

“I remember being really disappointed in myself,” Welsh said. “If I was on campus, I’d probably be able to focus more and I would have more time to not deal with family responsibilities and to focus on this class that I ended up dropping.”

Though she had the option to live on Harvard’s campus this year, Welsh — a first-generation, low-income student — felt pressure to live at home. By staying in Philadelphia, Welsh qualified for the $5,000 per semester stipend Harvard provided off-campus students and was able to stay nearby her mother, a healthcare worker who is immunocompromised.

“That $5,000 is like, you can help your mom with the rent with this, pay a couple of bills with this, you could buy groceries,” Welsh said. “It was a deal I couldn’t pass up, being able to help my family. So I was like, ‘You know what, I’ll take the hit academically, I’ll take the hit socially, and then at least I’ll have this money that can alleviate the stress that my family is feeling.’”

FGLI students like Welsh have faced an onslaught of challenges in the year since Harvard sent students home because of the coronavirus crisis.

When students were scrambling to rapidly move out of Harvard’s dorms in March 2020, FGLI students were disproportionately impacted. Those inequities have spilled over into academics, according to FGLI students, who said unreliable internet, family responsibilities, and strained mental health have deleteriously affected their academic performance this past year.

While Harvard students study in the same libraries and learn in the same lecture halls during normal times, the coronavirus pandemic has done away with those shared academic resources, highlighting inequalities that previously existed within the student body.

Challenges Living and Learning at Home

Jordan H. Barton ’23 has had to relocate three times since the College’s bombshell announcement that students should not return to campus after spring break 2020.

Uncertain where to go, Barton said he initially stayed with extended family in Texas, where he and three other students took virtual classes using the same unstable internet connection.

“I just had no use of the internet. I had no ability to participate in section,” Barton said. “My camera was off constantly. I was always breaking out. It became literally impossible to really participate.”

Barton said he had to move two more times before he found a place with stable internet — a requirement for online classes but a luxury for some FGLI students, who reported living in environments inadequate for virtual learning.

In some cases, Harvard helped students who lacked basic resources.

Will Dey ’23, who has spent the last year at home in Texas, said he lives in a town where he is “fortunate just to have a printer at home.” Without a reliable internet connection to attend class, Dey said he asked for assistance from Harvard’s IT department, which provided him with a hotspot that enabled him to partake in online classes.

Jaden D. “JD” Deal ’23 said he was grateful that a Harvard alum offered to host him in Santa Fe, N.M. during the fall semester. Away from campus, feelings of isolation caught up with him and overwhelmed him, he said.

“What I thought was going to be a really great moment for my mental health and getting away from my home responsibilities turned more into isolating myself,” Deal said. “I was really alone in my thoughts, and it was really affecting my academic performance.”

Poor mental health prohibited Deal from completing many assignments during the fall semester, he said.

“It was the first time that I had to really kind of step up and say, ‘I need help,’” he added.

Citing challenging learning environments away from campus, some FGLI students petitioned to live in Harvard’s dorms.

Those students include Aisha C. Abdelhamid ’23, who said she had difficulty focusing on academics while living at home in New Hyde Park, N.Y. in the fall.

“I shared a room with my sister, and she also had school online,” Abdelhamid said. “It was always a conflict in terms of who would take the desk or who would be distracted during class.”

To remedy her situation, Abdelhamid decided to live on campus this semester.

Not all students with challenging home environments felt they could make that same choice, though.

Though the College attempted to ease the financial burden of living off campus by providing students a $5,000 stipend per semester, the allowance had the effect of convincing some students to stay put in challenging learning environments, they said.

Deal said the $5,000 was a “huge boon” for his family and went toward repairing a car, buying groceries, and covering various other expenses.

Deal said though he wanted to return to campus, the prospect of contributing $5,000 toward his family was too appealing to pass up.

“If you stay away from campus, you’re given $5,000. Obviously, a majority of students are going to want to choose that even if it means returning home, even if it means still paying bills and supporting your family,” he said.

Other students said they used the Harvard money to find living accommodations away from home where they could smoothly continue their studies.

Avery C. Robinson III ’23 said he was “grateful” for the stipend, which allowed him to secure a living arrangement away from home where he could successfully take classes.

“For me and a couple of my blockmates, we knew that staying at home really wasn’t an option. It wasn't gonna be conducive to our learning,” he said. “Eventually we found an Airbnb in D.C. for the fall, so we stayed there.”

For Barton, the student who relocated three times over the past year, the $5,000 stipend encouraged him to continue his studies, as it allowed him to “buy groceries, pay bills, and survive,” he said.

“My biggest incentive for staying in school obviously was the stipend Harvard supplied because that would give a baseline security,” Barton said.

Dey — the student who received tech support from Harvard — said he believes the College sometimes overlooks the unique challenges FGLI students face at home. For example, Dey said one of his professors this year required students to complete a midterm exam on iPads, forcing him to specifically request to take it on paper.

“I don’t know where this came from but the assumption everyone has an iPad,” Dey said. “We just had our midterm, and I had specifically asked — this is considered an accommodation — to print out my exam and then scan it with my phone.”

Harvard will lend and domestically ship an iPad to students enrolled in classes that require one, per the Office of Undergraduate Education website, though Dey said he was unaware of that option.

Yousuf Bakshi ’23, who is living on campus this spring because he faced a challenging learning environment at home during the fall semester, said he thinks “the novelty of Zoom has worn off,” leading some professors to jettison FGLI concerns.

“It felt like this semester, people like faculty have kind of dismissed the idea that some people don’t have the same technology and equipment to continue as normal,” he said.

Bakshi added he raised this concern with his professor, who was very “receptive.”

Barton also said certain professors and staff have “made genuine and true efforts to be there for students” throughout the pandemic. He specifically highlighted his Spanish instructor, whom he called “intensely supportive.”

Despite individual professors’ empathy, Robinson said it is “draining” for students to detail their personal challenges to professors in order to receive accommodations.

“Having to talk about your traumas and the difficult stuff that you deal with at home just to be accommodated for, so you don’t have to turn in a paper or homework the day that it’s due, is mentally, emotionally, physically taxing,” Robinson said.

Robinson, who serves as a co-chair for First-Year Retreat and Experience, a freshman pre-orientation program geared toward students from underrepresented backgrounds, said the group focused last August on creating comradery among its participants.

“Something that we really focused on was, how are we going to build a community online?” he said. “Introducing them to resources and opportunities is always [a] super important and essential aspect of FYRE, but also building that first-gen, low-income community — that feeling of home and belonging.”

Khurana told The Crimson in a February interview that though efforts have been imperfect, the College strives to have an “equalizing” function.

“People are coming from backgrounds in which social resources, economic resources, and cultural resources are not evenly distributed,” he said. “One of the things that the College aims toward — and I recognize we’re not where we want to be yet — is to be an environment where every opportunity is open to students.”

Robinson agreed that there are limits to Harvard’s attempts to create the same experiences for all of its students — particularly during a pandemic.

“First-generation, low-income students don’t really have the same amount of time to allot to their academics,” he said. “We’re the glue of our family.”