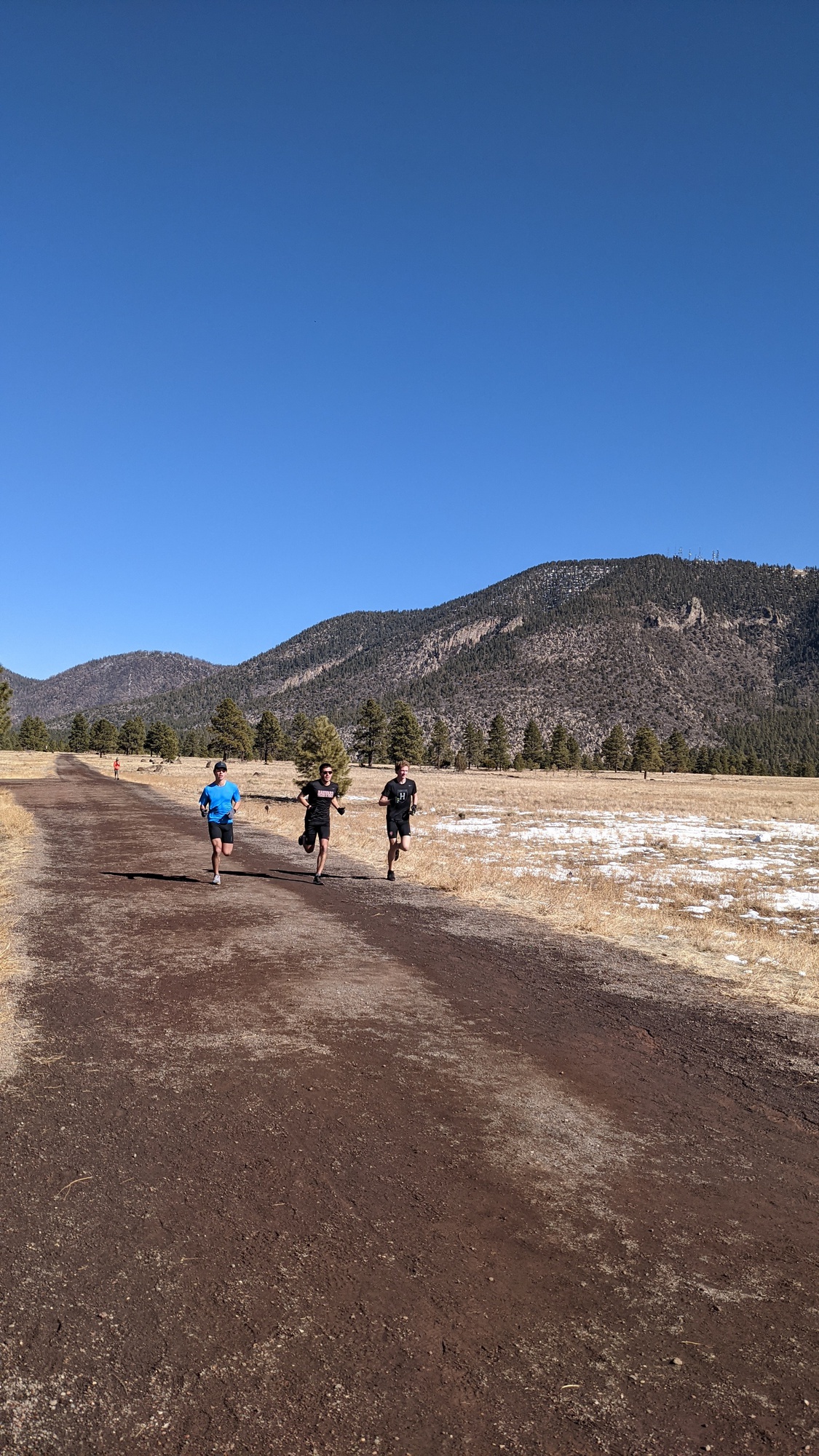 Flagstaff, Ariz. – In the heat and altitude of the Arizona winter, the Crimson Men’s and Women's Cross Country teams have come together to train and bond in a drastically altered year for Harvard sports.

After a successful 2019-2020 season, Crimson cross country runners were forced to scatter across the globe in March 2020, much like the rest of the Harvard campus. For many of the long-distance runners destined to compete in the Indoor Track & Field NCAA championships, the interrupted season was a blow to the incredible individual and team progress throughout the 2019-2020 season. This season saw some of the more impressive results in the history of the program, with both the men’s and women’s teams qualifying for NCAA national championships for the first time in program history.

With seniors lost to graduation, underclassmen taking a gap year, and a new class of first-year runners unable to join the team in a typical fashion, this year was always going to be a challenge for the coaching staff and the runners. In a sport as grueling as cross country, team chemistry and shared workouts can help bear the burden of high-volume training weeks and keep runners accountable. Especially for young runners, the jump from high school to college involves longer races and an acceleration in mileage that almost needs to be supplemented by mentorship and coaching.

“We were pretty much training individually throughout the entire fall,” said junior David Melville about the fall semester. “For high volume, it’s very difficult to run on our own, to mentally manage that.”

Three to four incoming first-years who had deferred enrollment, along with a few sophomores, came out to Flagstaff in the fall to train together for a few weeks. This Arizona experience ended up being a test run for the bigger group that would come out in the following semester. The team hopped on a Zoom call over winter break and decided that they had to meet up somewhere. Training alone, scattered across different time zones, was too difficult for student-athletes to keep up their training volume and simply ruined team morale.

“I would say that the biggest challenge for me was a lack of motivation to continue to train hard, and I think many people on the team struggled with that too at first,” said Michael Alber, who is deferring senior year enrollment until next year, about the fall season. “There really isn’t an easy solution to that, but knowing that you’re not alone helps.”

Following the lead of the deferred freshmen, a large group of the team decided Flagstaff, Ariz., was a perfect fit for the team's needs. Flagstaff remains much more temperate than Cambridge during the winter months and is at a much higher altitude — approximately 7,000 feet — compared to Cambridge’s 39 feet of elevation. With this additional altitude, the runners hope to add a cardiovascular boost to their training regimens. Moreover, Flagstaff has hundreds of miles of dirt roads, perfect for preventing injury from overuse on pavement. Finally, Flagstaff has a long history of being a place for performance athletes to train. This meant that, as Covid-19 restrictions eased, there was the potential for informal and formal races to keep the team in racing condition. Overall, Flagstaff was the perfect destination for the team to train and bond during the restricted season.

“Having a group in Flagstaff is really great. We can push each other during workouts, and it’s also nice just to spend time together and not be alone at home,” commented Alber on the merits of the Flagstaff setup. “Although we won’t be racing for Harvard anytime soon, this training will still help us when we hopefully compete in the fall.”

The total number of people in Flagstaff varies, as runners on both the men’s and women’s sides join the team for a week or two and then leave for other final destinations. However, normally, there are about nine to ten runners from the men’s team at any given time so far this semester, and another men’s team member is arriving this coming week on a permanent stay. Moreover, four runners from the women’s team have settled in Flagstaff as well. This group of 13-14 runners is split between two houses, one for the men’s group and one for the women’s group. The runners frequently meet up for bonding events and training.

So far the team has not been able to engage in any races while out in the Grand Canyon state. However, that is slated to change as many of the team members applied to a race on March 21st in Phoenix. Race coordinators have not released the final rosters or the events in hopes to keep crowds at bay during the Covid-19 pandemic. Nevertheless, it is safe to assume that some Harvard runners will have the chance to compete in their first real race in a year. This will be an especially large boost to team morale, as the Ivy League is one of the only major NCAA Division I conferences currently on hiatus. Thus, Crimson runners have had to watch from the sidelines as their competitors outside of the Ivy League partake in races and competitions across the country.

“Being like, one of the only groups that’s not able to run all of those races, we’re kind of looking at the other teams, running all these really fast times and qualifying for nationals and stuff,” said Melville on the canceled season. “So us being out here is making the best of a tough situation. Everyone has been super excited for the meet coming up because it’s been 13 months since any of us have raced. We’ve been training really hard, and it’ll be fun to see that training pay off. I think a lot of us are going to make big jumps compared to where we left campus.”

Most of the runners are excited for the benefits of the high altitude training in the short run, but generally are unsure that those benefits will carry through to next year’s season. Furthermore, high altitude training can be draining for the same reason it is so effective. For this reason, every Friday, the team packs into cars and drives down to Sedona, which is at a much lower altitude (4,000 feet), to sample a different altitude and gauge the effects of the extra 3,000 feet.

Another positive development of the team’s time in Flagstaff is the closer relationships they have formed. Running is by nature a solitary sport during races but thrives as a communal sport during training. Keeping the team connected during Covid-19 was always going to be a major challenge, but the Flagstaff group has been able to make the best out of the canceled season.

“It’ll be easier going back to campus, knowing all of these incoming freshmen who have deferred,” Melville noted. “I think it’s especially good for them because they get to see how the older guys train and what they do on a daily basis. But overall I think this is really good for team chemistry in general. We’ll definitely be a lot closer as a team because of this. You’re living in a house with seven other guys, [so] there will be a lot of good memories to look back on.”

Runners always are a resilient bunch, capable of running 100-mile weeks on limited rest. A Covid-19 impacted season required a different kind of resilience: the kind of resilience to bring a scattered and disparate team together.