In Canada and Separated from Teammates, Noah Kirkwood Works to Stay Connected 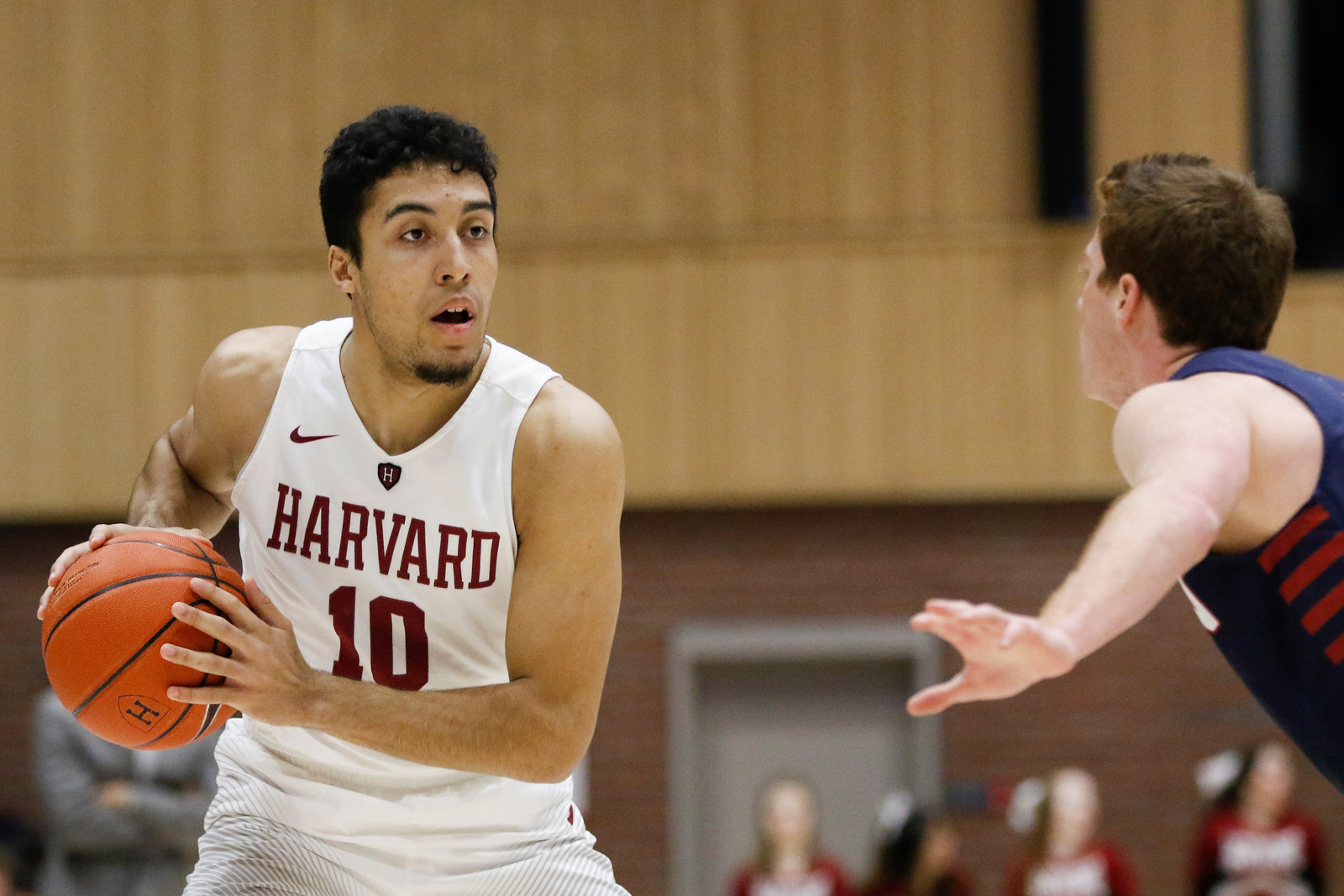 The hard-working, All-Ivy League forward is eager to return to the hardwood as one of the Crimson's veteran leaders. By Timothy R. O'Meara
By Mahtab Shihab, Crimson Staff Writer

For almost all of Harvard’s athletes, the past year has been full of unexpected trials and tribulations. The Ivy League canceled all three seasons of athletics for the 2020-21 academic year, leaving many student-athletes with no opportunity to compete in the sports they have been training for their whole lives.

One athlete in particular who has felt the toll of the pandemic is Noah Kirkwood. The Ottawa, Ont., native is a junior forward on the men’s basketball team. He is undeniably one of the team’s most talented players, having earned All-Ivy League first-team distinctions for the 2019-20 season. He led the team in scoring 10 times and in assists 13 times during his sophomore campaign. Hoping to continue his impressive career, Kirkwood has been struggling to find adequate resources for training and playing basketball during the pandemic.

“It's been really tough for a lot of the guys, and it's been really tough for me,” Kirkwood said. “This summer, everything was closed. I had no gym access from March until September, and I was in an indoor court for maybe three or four hours total during that time. But the thing that kept me moving was every time I was working, I was always working for the end goal.”

The lack of resources at Noah’s disposal did not inhibit him from trying to train his hardest and be prepared for whenever the next time he would be out on the court. In recent months, he has been living in his hometown of Ottawa but has finally been able to get access to a gym. He has a demanding schedule that includes court time, lifts, and the workload of taking five classes.

Not only has Noah struggled with getting the requisite physical training, but it has also been difficult engaging with the rest of his team during the pandemic. He has not shared a court with his teammates in about a year, but the coaches have tried to continue to foster a culture of unity and collaboration.

“I'd say our coaches have done a pretty good job in terms of doing team Zoom meetings,” Kirkwood said. “But it's really tough. Since we aren’t in the same place, it’s difficult for a coach to try to keep everyone together in a way that makes sense. However, Coach Amaker does a good job of pulling us together in meetings and having talks and updates of what we're doing.”

The last time the junior forward stepped on a court, he was an underclassman surrounded by veterans who had the experience and leadership to guide the team through a long, arduous season. Now, Kirkwood stands as one of the most experienced players, tasked with the larger responsibility of bringing together a team that has never been with one another.

“It's funny you say I’m the veteran because it feels like I was a freshman/sophomore not too long ago,” Kirkwood said. “Now, you're right, I am kind of the veteran that's had maybe the most experience playing-wise. One thing I tried to do is just check in on a lot of our guys and see how they're doing and just say I'm a voice or an ear for you whenever you need it.”

Even though the team has not played together for such a long time, the goals for Harvard Men’s Basketball have not changed for Noah. He hopes to still lead his team to an Ivy League Championship and NCAA tournament berth. The Crimson has not appeared in the big dance since 2015.

“For the team, the goal doesn't change,” Kirkwood said. “Win the Ivy League and go to the tournament, I think is what we try to do every year, no matter what. We always have a chance even if there are new challenges this year. And personally, right now, I'm just going to take the same approach which I did every other season, which is taking it day by day.”

Just as his aspirations for an NCAA tournament berth have not wavered, neither have Noah’s individual goals. Playing basketball at the highest level in the NBA is a pursuit that is still realistic for the Canadian native.

“My aspirations have still been to play [in the] NBA one day, and I still believe in what I can do, and that's why I'm working really hard right now to keep that goal alive,” Kirkwood said. “But right now, I'm just worried about how our team is going to play this season and how I can help the team win. So I'm not too worried about my post-college career. If it happens, it happens, and if it doesn't, then I didn't work hard enough.”

For Kirkwood, as much as he has missed playing on the court and competing for a championship, the inability to spend time with his team, some of his closest friends, has been the greatest hardship to not having a season this year.

“What I miss is the team meals and the chats in the locker room before practice,” Kirkwood said. “It's the bus rides and it's seeing fans. The stuff that I missed the most, especially just being at home, is not being able to see my closest friends lately.”

— Staff writer Mahtab Shihab can be reached at mahtab.shihab@thecrimson.com.