Not Throwing Away His Shot: How Alexander Kolesnikoff is Reaching New Heights – and Distances – amid a Global Pandemic 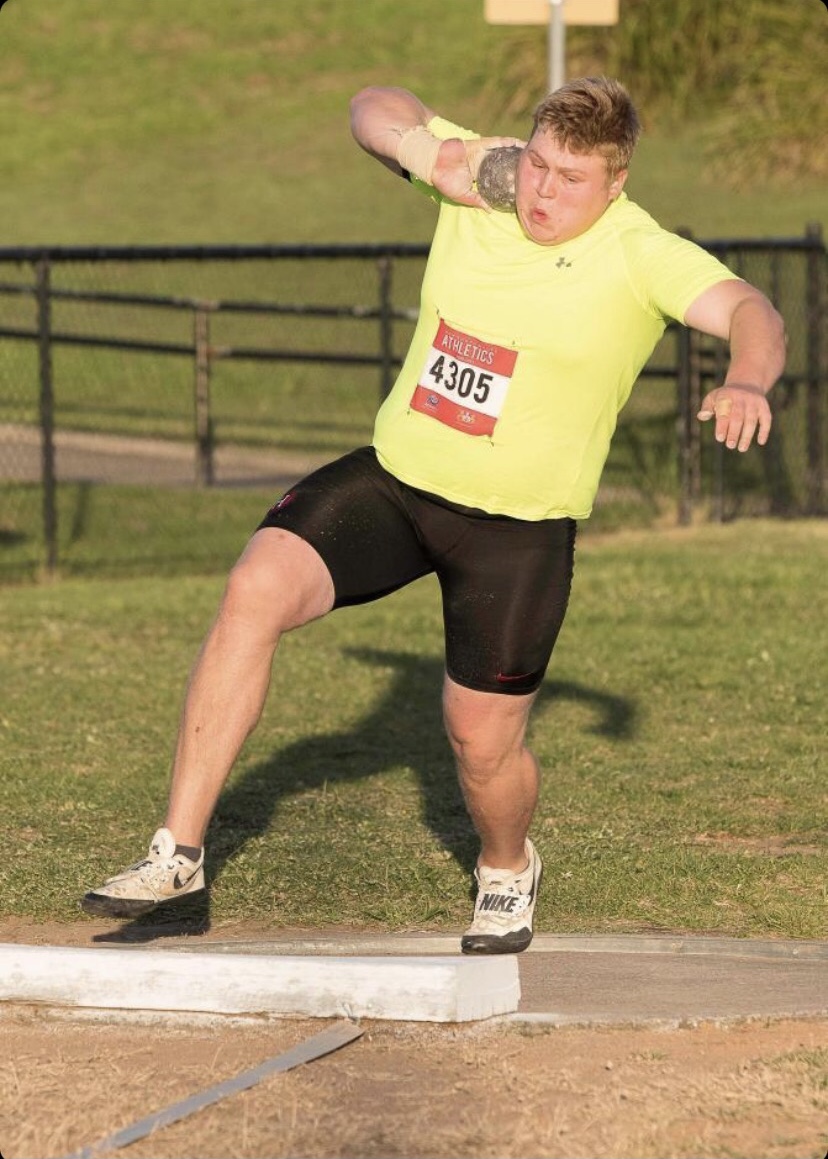 The determination is evident in Alexander Kolesnikoff's face as he prepares to uncork the 16-pound iron shot put. By Courtesy of Nikki Kirkman
By Noah Jun, Crimson Staff Writer

Cradling the iron ball between his shoulder and neck, his hand white with chalk, sophomore shot-putter Alexander Kolesnikoff slowly rotated to his right before rapidly uncoiling his body, completing a 540° spin, and launching the sphere into the field in front of him. In this five-second feat of strength, Kolesnikoff hurled the 16-pound (7.26-kilogram) shot 64 feet (19.51 meters) — the farthest distance ever thrown by a Harvard athlete (the previous record, 62’1”, was also set by Kolesnikoff last August) and the fourth-farthest distance in Ivy League history. With this performance, the sophomore also placed first in the shot put event at the Mingara Interclub Meet and set a new record for all of New South Wales, Australia.

“It’s a big start to the season,” said Kolesnikoff from his home in Strathfield, Australia. “I’ve been throwing better than that in training and practice, so for me, it’s a good start.”

After being sent home last March, the sophomore has spent his time training and taking classes in Australia, as well as coaching at his old high school and other clubs in the area. Despite the 16-hour time difference between Cambridge and Sydney, which would ultimately lead to attending lectures until 2:30 a.m., the decision to enroll in online classes prevailed.

“A lot of my friends decided to take online classes, and we all wanted to graduate at the same time,” Kolesnikoff said. “Another [reason] was we’re graduating in May 2023, and...the Paris Olympics are in 2024. I’m going to spend some time after I graduate to train [to] qualify for the Olympics, which I’m very confident I’ll be able to do.”

The Ivy League’s cancellation of sports due to the pandemic also did not deter the shot-putter from continuing his Harvard education.

“In terms of missing out on the athletic season, I also have the opportunity to pursue postgraduate degrees and use my eligibility at other universities in America, so I’ll definitely be pursuing that route later,” Kolesnikoff said.

Drawing silver linings from the pandemic, the Australian noted that his country’s lack of restrictions allowed him to train and progress as if he were still on campus.

“We’ve needed to individualize our training approach even more than we already had,” said Harvard head Track & Field coach Jason Saretsky, reflecting on the unique circumstances that student-athletes face while spread across the globe.

“I've been following my program to the greatest extent I can,” said Kolesnikoff, mentioning his access to facilities such as Sydney Olympic Park and local gyms. “I'm definitely not limited in my resources here. Particularly, I've got other friends who've definitely struggled through these times, so I'm definitely fortunate in that regard.”

Kolesnikoff also scheduled his semester in such a way that emulates his daily routine on campus, with classes in the morning, training in the afternoon, and work and rest in the evening.

Moving forward from his performance at the Mingara Interclub Meet, Kolesnikoff has much planned for the rest of the season, his Harvard career, and beyond. In other competitions this February, the former World Junior Championship Finalist has thrown 63’9” (19.44 meters) and 63’7” (19.39 meters).

“In terms of immediately, I’m just more focused on the season at hand,” Kolesnikoff said. “Hopefully in a few months, I've got the [Australian Track and Field National Championships] and the Olympic trials...For me to make it, I have to improve another meter to be in good shape with a chance of making it — no guarantees even when I throw an extra meter. But I never count myself out. In terms of long-term goals, I’ve hopefully got the World University Games in August… Next year, there’s the Commonwealth Games, and then there’s the World Championships next year as well... But the 2024 Olympics is the big next goal, and by that stage, I’m sure I should be qualifying for that.”

There’s also much Kolesnikoff is looking forward to with the resumption of Ivy League and intercollegiate competition.

“Two weeks before we [left] last year, we had the Ivy League indoors, and I finished third there,” Kolesnikoff said. “I remember [head coach Saretsky], he told me, ‘Ah, this is the only Ivy League I’m going to let you lose.’ So I’m looking forward to the [Ivy League Championships]. I also really miss the whole team vibe and training with the team... I’d definitely like to qualify for the [NCAA Track and Field Championships] as well, in my next opportunity to do so. A top-five finish there would be nice, and then, maybe, who knows, by the time I’m a senior, maybe I’m close to winning it.”

In addition to reaching distances that would make him competitive against other potential Olympians, Kolesnikoff hopes to set a new Ivy League Indoor Record by eclipsing Cornell alum Stephen Mozia’s 2014 shot put of 68’2” (20.79 meters). Fortunately for him and assistant throws coach Darcy Wilson, the path to reaching this last meter is clear.

“Alex has currently been practicing with a large training load,” Wilson said. For instance, the throws coach had Kolesnikoff “[practicing] in the morning prior to competition... at his last meet.”

Coach Wilson also plans to have the shot-putter “freshen up with a speed [and] acceleration cycle” that promises “big throws to come.”

“I think my biggest improvement will come in the weight room,” Kolesnikoff mused. “Compared to all the throwers, whether it’s in Australia or in America, I’m probably one of the weakest ones.”

The sophomore compared the maximum weight he could bench press, 330 pounds, to what NCAA champions could move: over 450 pounds.

“I only started lifting in my final year of high school, whereas I know my old training partner and other throwers in Australia have been lifting years in advance of that,” Kolesnikoff said. “So that’s somewhere I really need to improve, as well as in speed work. When I’m benching 440 pounds… that’s definitely when the big improvement comes, and that’s when I’ll be throwing the shot put over 21, 22 meters.”

With this understanding of the path forward, the sophomore is excited to progress in his throws — not only shot put but also discus and hammer — and to participate in various collegiate, national, and international competitions in the years to come.

“For me, it's like moving up,” Kolesnikoff said optimistically. “I’m still very young, so moving forward, I just have to get better than [where I am now].”