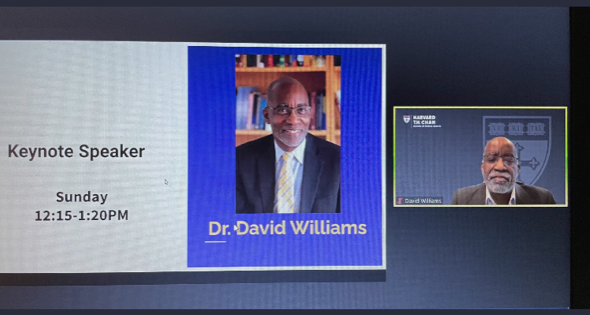 Activists and scholars across a breadth of disciplines gathered virtually for the fifth annual student-run Black Health Matters conference this weekend to discuss the effects of systemic racism on Black health.

The Harvard Undergraduate Black Health Advocates organized the two-day event, which featured a series of keynote addresses, panels, and workshops guided by speakers affiliated with Harvard and organizations around the country.

Abigail Joseph ’21, who served as conference co-president alongside Akosua F. O. Adubofour ’21, said the purpose of the conference was to look at Black health issues through an intersectional lens.

“It felt reductive to always talk about Black people as a monolith, so I wanted our conference to kind of dig into more of those differences and to tease them out health-wise,” she said.

“The flawed persons who have promulgated historical theories about medicine have devised theories that still have effect today,” said Washington, who wrote the award-winning book “Medical Apartheid.”

Still, Washington said that issues concerning Black health are not only the result of distrust. She posited the reason many Black people have not yet received the Covid-19 vaccine is because health officials coordinating the vaccine rollout did not prioritize the health of Black Americans.

“The fact that they were not getting the vaccine doesn’t mean that they’re rejecting it, it could just as easily mean that their access to it has been cut off,” she said.

Harvard School of Public Health professor David R. Williams said in his Sunday keynote that racism is a contributing factor to the reduced life expectancy of minority groups.

Williams, who serves as the Social and Behavioral Sciences department chair, said race is one of the main driving factors for health disparities, more so than differences in income and education.

“These data clearly indicate that there’s something about your socioeconomic status, income, and education that matters for your health regardless of your race, but there’s something else about race that matters even after we’ve taken income and education into account,”' he said. “In the past 25 years or so, I and other scholars have been really asking the question why does race still matter and could racism could be a critical missing piece of the puzzle to understand the patterning of racial inequalities in health.”

Williams added that the Covid-19 pandemic accelerated that disparity in life expectancy, citing a three-year decrease for African American males between 2019 and 2020.

“We need to monitor the extent to which Covid-19 is causing death and disease and pain and suffering on a large scale, but it is also having a huge negative economic impact on communities of color,” he said.

The conference also included a variety of workshops on topics such as therapy, racial bias in dermatology, and Black beauty.

Adubofour, one of the conference’s presidents, said she hopes the ideas sparked by the conference continue past the weekend itself.

“Outside of the conference, our main focus is to really engage undergraduates more in the conversation,” Adubofour said. “They’re the people that are going to be the next wave of researchers and professionals that are going to be affecting change for Black people’s health in the country.”

–Staff writer Audrey M. Apollon can be reached at audrey.apollon@thecrimson.com.