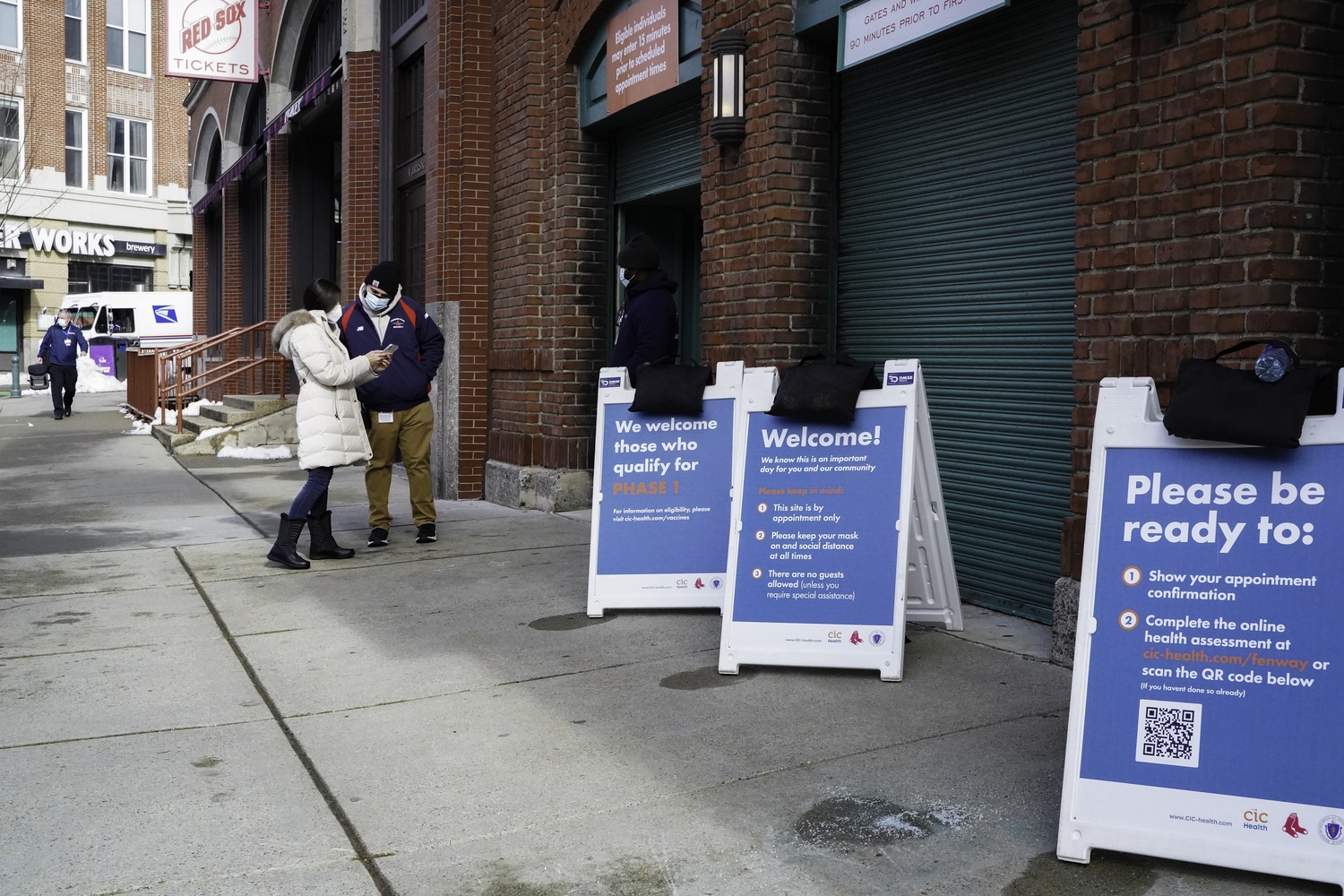 The City of Cambridge does not have its own public vaccination site, but the state’s second largest vaccination site opened Feb. 1 just across the Charles River at Fenway Park in Boston. By Steve S. Li
By Ryan S. Kim and David R. Shaw, Crimson Staff Writers

Cambridge began vaccinating residents 75 or older at the beginning of February as it entered the next phase of its Covid-19 vaccination program, though statewide and national vaccine shortages continue to hamper its rollout.

On Feb. 1, the state entered Phase Two of its vaccine distribution program, during which residents aged 75 or older became eligible to receive the vaccine.

Individuals aged 65 or older, school and public health workers, and individuals with comorbidities will also be able to receive the Covid-19 vaccine later in Phase Two, though the exact date is still unknown.

During Phase One, the City of Cambridge administered 1,231 vaccines to first responders and individuals experiencing homelessness, according to Cambridge Chief Public Health Officer Claude Jacob, who presented an update on the city’s Covid-19 response during the Feb. 3 City Council meeting.

Per Jacob, the state of Massachusetts has capped Cambridge’s vaccination rollout at 100 vaccines per week, the same level as most other local health departments in the state. The city, however, is capable of administering roughly five times that amount — if not for statewide and nationwide vaccine shortages, according to Jacob.

To manage the limited supply, the state has been “triaging” distribution, with priority given to regional mass vaccination sites and limited allocation to cities and towns including Cambridge, Jacob said. Vaccine requests from local health departments have been limited to 100 at a time through February.

Jacob said the city plans to set up public vaccination clinics once the state provides enough doses for Cambridge to vaccinate residents who fall under Phase Two’s priority groups.

“We have the infrastructure,” Jacob said. “The issue is really about having sufficient doses on hand.”

The Massachusetts Department of Health did not immediately respond to a request for comment Sunday.

Because Cambridge does not yet host a public vaccination site, residents aged 75 or older must rely on their pharmacies, medical providers, or mass vaccination sites outside of the City.

In conjunction with the state, the Cambridge Public Health Department has set in motion on-site vaccination for residents and staff of low-income, senior housing. On Feb. 1, the Cambridge Community Corps began vaccine information and registration outreach at local senior buildings. On-site vaccinations took place on Feb. 4 and Feb. 5.

“You have to make an appointment, and there aren’t enough appointments,” he said. “So that part is really frustrating.”

Cambridge resident Mary “Blue” B. Magruder ’69 said she was able to book an appointment at Gillette Stadium for her husband, who is 78.

Every time slot at the stadium had five to 25 appointments available, according to Magruder. While she said she was “very pleased” with her experience scheduling a Covid-19 vaccine, Magruder noted it might pose challenges for individuals without internet access or time to wait for an appointment opening.

Cambridge resident Gaby Whitehouse said she and her husband — who are both over 75 years old — were able to receive the vaccine with relative ease due to her husband’s status as a minister.

“A friend of ours, who is a minister in Bedford, called us earlier in the week, and said they were giving priority to ministers,” she said. “He gave us a phone number, and just said ‘call there.’”

They received the vaccine on Feb. 1 — the first day people over 75 became eligible.

—Staff writer Ryan S. Kim can be reached at ryan.kim@thecrimson.com.