‘The Fall of the House of Usher’ Review: An Immersive and Spine-Chilling Virtual Opera Experience 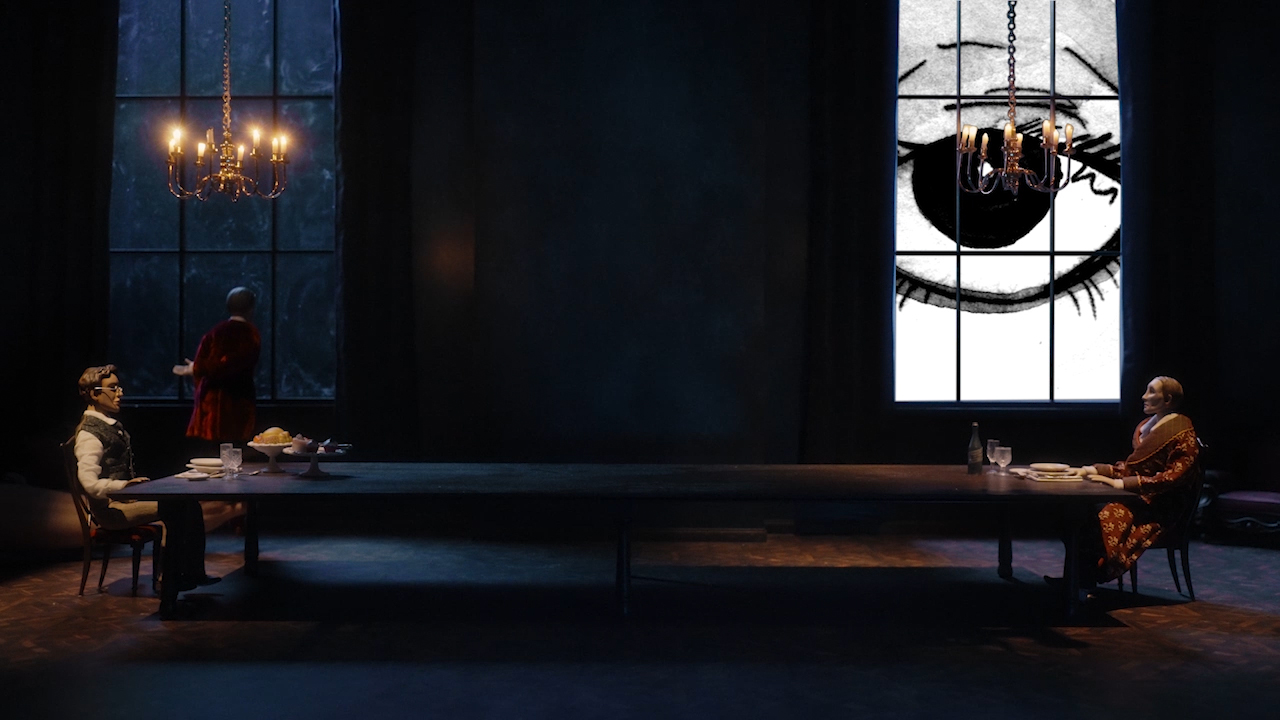 The animated Luna watches Roderick and William eat dinner in "The Fall of the House of Usher" (2021).
By Madi L. Fabber, Crimson Staff Writer

Within the first minute of “The Fall of the House of Usher,” viewers know to expect the unexpected — they see the production’s opening image of the bottom half of a seemingly masculine form in a suit, only for the camera to pan upward to reveal a woman discussing gender, dolls, and emotional intelligence.

The production, now streaming on the Boston Lyric Opera’s website through operabox.tv, is a creative and otherworldly venture in virtual theater. Presenting Philip Glass’ operatic rendition of Edgar Allen Poe’s short story of the same title, this show combines hand-drawn and stop-motion animation styles with archival television footage to curate three interlocking storylines inspired by the source text. The 90-minute pre-recorded production is accompanied by a series of interactive materials available online, providing a defined space for audiences to engage with the story in the absence of a physical theater.

The original story’s Gothic atmosphere pervades the show, allowing audiences to fully immerse themselves in its mystique. Though the constantly shifting modes of storytelling make the opera feel like a fever dream, this effect feels intentional due to repeated symbolism and the careful pairing of imagery and the music — like when a character is caught riding his horse in a raging storm, the intensity is amplified by a particularly dramatic swell in song. The feverishness reflects the overall narrative of the show; when watching these dream sequences, audiences feel that they themselves are in a dreamlike state, furthering the surrealist nature of the piece and blurring the line between fact and fantasy.

This delightful chaos also stems from the different layers of the show: the original Poe tale, represented by the stop-motion animation; the experiences of Luna, a young immigrant girl in a detention center on the United States-Mexico border, stylized through hand-drawn animations; and a series of interspersed television clips. While the non-sequential footage doesn’t supply the same fullness of narrative as the other two modes do, they amplify the emotions and conflicts of the production’s other layers, such as when Luna’s mistreatment in the detention center is interspersed with news clips of anti-Immigration and Customs Enforcement protests. By representing the events of the original tale as imagined scenes within Luna’s mind, the show raises important questions about belonging, familial relationships, and mental health, such as who gets to belong within the narrative of the American Dream, and at what cost?

For the first half of the show, it remains unclear how these distinct narrative lines tie together. While the uncertainty is frustrating at times, the haziness of these relationships adds to the surrealism of the show. If viewers are willing to allow this production to defamiliarize and unsettle — which it accomplishes to great effect — then they can expect an impactful, if ambiguous, theatrical experience. The strength of this eerie show lies in its form and style, which allow the audience to come to their own conclusions about what the show means.

The clearly conveyed tone of the show succeeds because the production quality of “The Fall of the House of Usher” constantly amazes. At the heart of the opera is a stellar cast of emotive singers and actors — directed by James Darrah and conducted by David Angus — whose rich and resonant voices lend themselves neatly to the chilling and otherworldly musical atmosphere of the work. Engaging visuals complement the music and narration, with each distinct medium of film beautifully stylized, from the ethereal stop-motion ghosts of the House of Usher to the nostalgia-inducing clips of ‘50s backyard parties to the unsettling hand-drawn depictions of Luna’s isolating nightmares. These ever-changing aesthetics, crafted by a team of seven art and photography directors, designers, and animators, add a constant sense of movement to the piece, keeping audiences on the edge of their seats throughout.

Though these elements of the production are pre-recorded and edited to perfection, the show retains a critical element of interactivity to keep it balanced on the line between film and theater. The Boston Lyric Opera website features an interactive tour of the famed House of Usher, outfitted with nods to the piece’s most important symbols, bits of Edgar Allen Poe’s poetry and personal history, and even a video with screenwriter Raúl Santos (who devised the production’s interwoven narratives) discussing the process of making the show. Additionally, audience members are invited to contribute directly to this artistic project by writing their own brief addition to a “community gothic short story,” which viewers are able to read upon the story’s completion. With these opportunities for further audience immersion, the BLO successfully crafts enticing and unique mythos around the show, creating something that continues to exist after the show’s virtual curtains close.

The combination of the show’s creative storytelling, beautiful design, and immersive opportunities to engage with the opera's world lures viewers into engaging deeply with the work, which is all too rare for virtual theater. With the opportunity to not only watch but also contribute to the work of theater, “The Fall of the House of Usher” gives audiences a refreshing and innovative online theatrical experience.

—Staff writer Madi L. Fabber can be reached at madi.fabber@thecrimson.com.