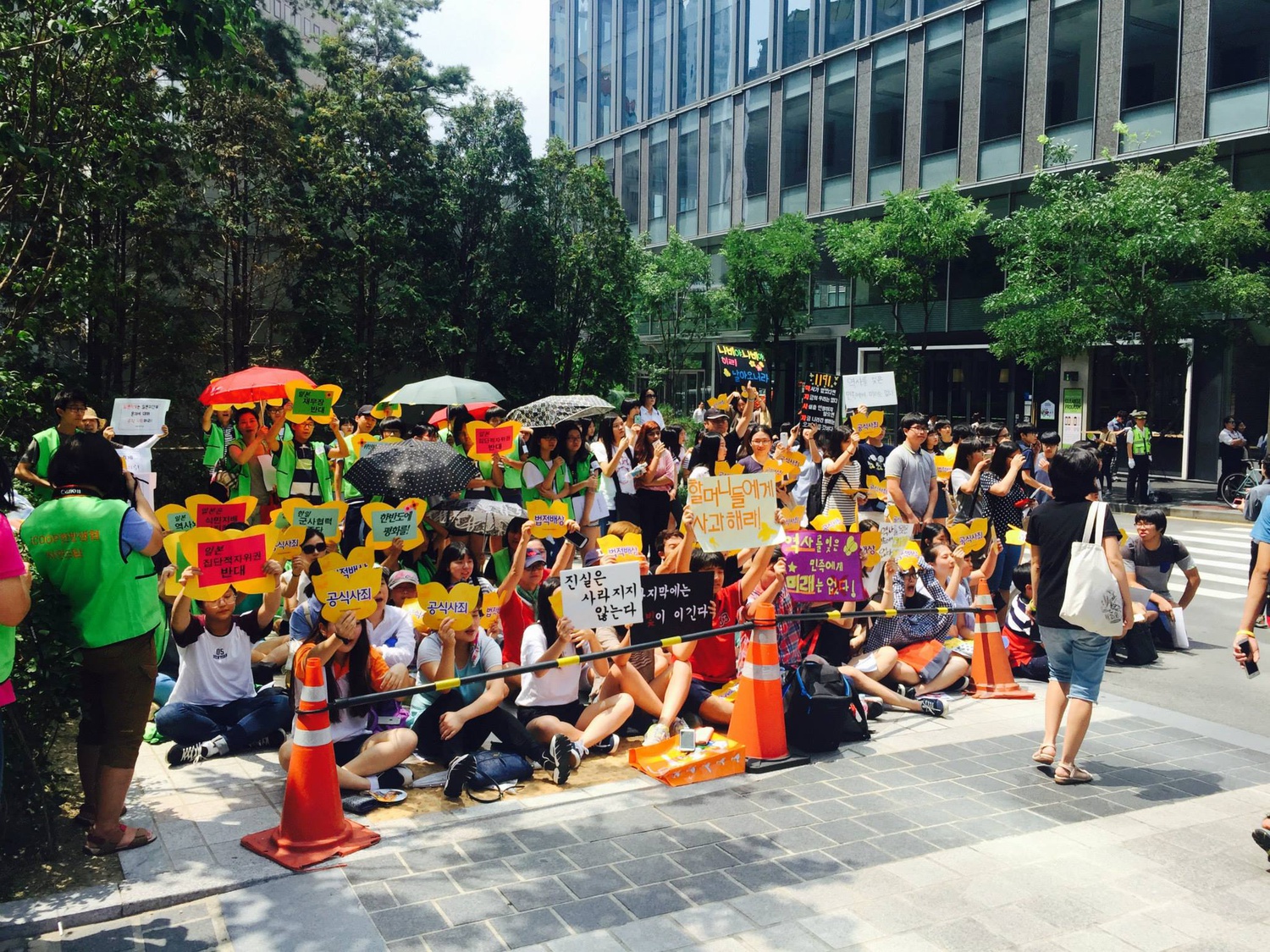 Every Wednesday since 1992, South Koreans have held a protest in front of the Japanese embassy in the capital, Seoul, to demand the Japanese government apologize to and compensate victims of sexual slavery in Imperial Japan, known as comfort women. By Courtesy of Joseph L. Choe
By Ariel H. Kim and Simon J. Levien, Crimson Staff Writers

The journal initially issued an “Expression of Concern” earlier this week in response to mounting backlash, announcing that concerns over the article’s “historical evidence” are currently under investigation.

“Comfort women” is a term used to refer to women and girls from Japan’s occupied territories, including Korea, who were forced into sex slavery by the Imperial Japanese Army before and during World War II.

Against the historical consensus, Ramseyer claims in his paper, entitled “Contracting for Sex in the Pacific War," that comfort women were not coerced and instead voluntarily entered into contracts with Japanese brothels. His article stoked public outcry across South Korea after his abstract was re-printed in late January in the nationalist Japanese newspaper Sankei Shimbun.

Since, students and scholars at Harvard and beyond criticized his paper as lacking historical context and evidence.

Multiple individuals and groups have penned open letters and petitions, totalling at least 10,000 signatures, demanding various responses from the journal, Ramseyer, and Harvard. Some argued the article should be withdrawn from publication, while others advocated disciplinary action against Ramseyer.

Andrew Davis, vice president of communications for Elsevier, the journal’s publisher, wrote to The Crimson Friday that the print issue slated to include Ramseyer’s article is being “temporarily held.” Writing on behalf of the journal’s editors, Davis also confirmed the journal still plans to print the article.

“Although not printed, it is already assigned to the March issue (Volume 65) of the journal and is considered final,” Davis wrote. “The print issue is being temporarily held so the Expression of Concern, and comments/replies, can be published in the same issue as the original article to give readers access to the fullest possible picture.”

Though the issue-bound publication of Ramseyer’s article is delayed, the article has been available online since Dec. 1, 2020.

In response to petitions and demands that the journal remove Ramseyer’s article, Davis pointed to the journal’s correction policy, which notes that if “substantiated concerns” are raised about a paper, the journal may convene a review by new experts to determine if those concerns are legitimate. After this review, the journal may initiate a correction, which can constitute an editorial note, a retraction, or an Expression of Concern, which has already been issued.

When asked about the journal’s statement Friday, Ramseyer wrote in an emailed statement, “my article speaks for itself.”

Academics, Students Continue To Speak Out

Since the publication of Ramseyer's article, activists and academics alike have criticized the journal for its editorial process and decision to move forward with publication.

Samuel Clowes Huneke, a history professor at George Mason University, wrote to the editorial board of the journal demanding the article’s withdrawal, according to a tweet on Feb. 3. In an emailed statement to The Crimson, Huneke wrote that his letter went unacknowledged by the journal.

“By denying that these women were forced into sexual slavery, Prof. Ramseyer and the IRLE thus put themselves in the company of those who deny or whitewash other war crimes and crimes against humanity,” Huneke wrote.

Despite the journal’s Expression of Concern, Huneke stood by his call for retraction and his belief that the article “falls short of any reasonable scholarly standard.”

Though professors and students condemned Ramseyer’s research, critics remain split over the issue of academic freedom. Some argue Ramseyer is in his right to publish his article, while others, including Huneke, denounced that the journal accepted the paper for publication.

The Korean Association of Harvard Law School published a statement Feb. 4 criticizing the article but defending Ramseyer's right to publish.

Phebe J. Hong ’16, co-president of the Harvard Asian Pacific American Law Students Association, said her organization is working with KAHLS to write a “critical analysis” of Ramseyer’s article with fact-checks. Hong noted, however, that APALSA has respect for academic freedom, “especially” that of Ramseyer.

Hong said APALSA has been in communication with Ramseyer to discuss the academic backing behind his article, and that Ramseyer has been “responsive and replying to our inquiries.”

Ramseyer added in his emailed statement Friday that he appreciated APALSA’s openness and professionalism.

“I wish all academic disputes could proceed with such courtesy,” he wrote. 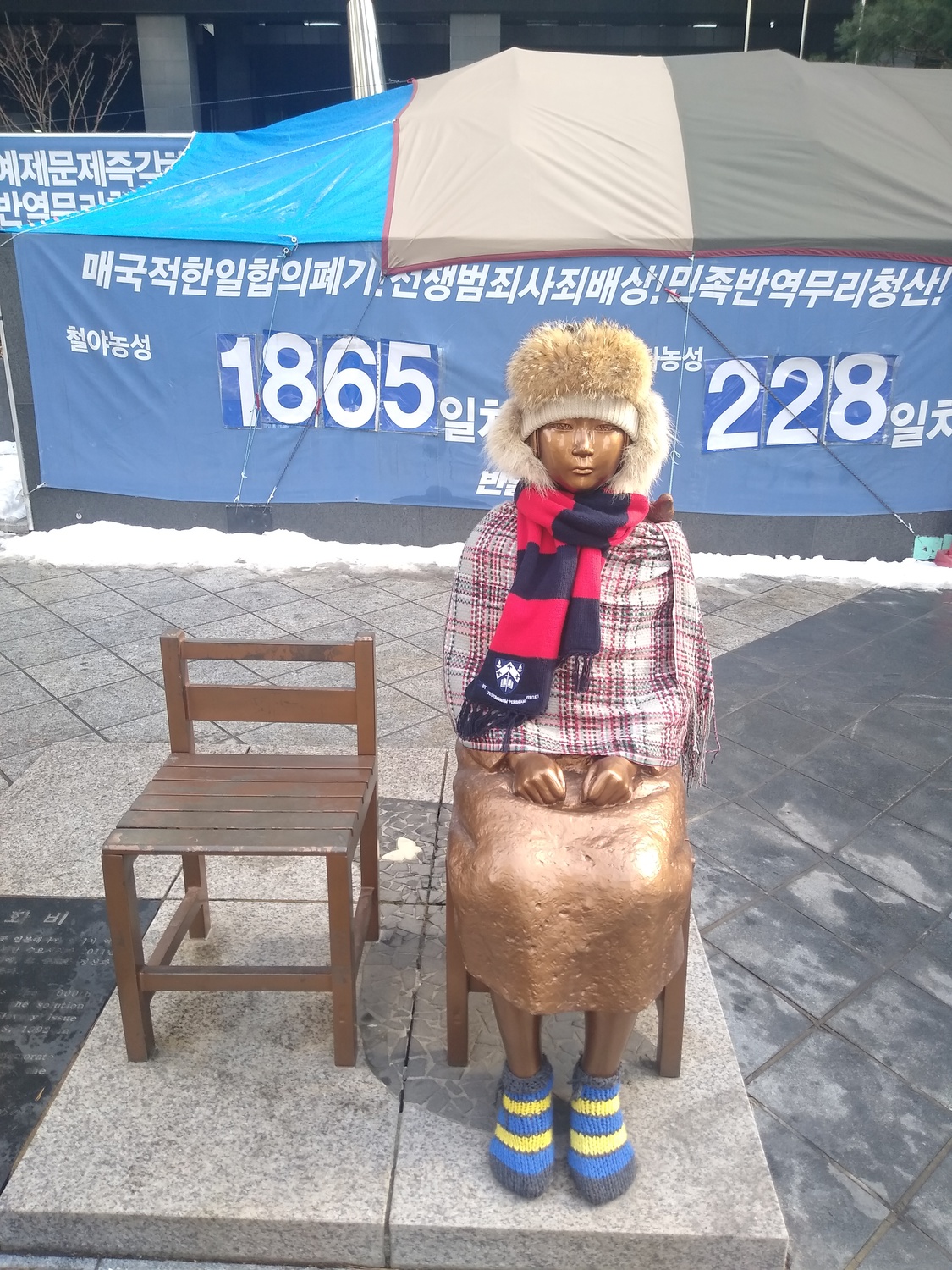 The Statue of Peace in front of the former Japanese Embassy in Seoul, South Korea commemorates comfort women, sex slaves taken by the Imperial Japanese Army during World War II. The slogans on the tarp behind the statue demand the Japanese government to make reparations. By Simon J. Levien

Joseph L. Choe ’17 and Mindy G. Nam — who wrote an op-ed in The Crimson Thursday that contextualized Ramseyer’s article within the broader picture of Japanese revisionist movements — also said they believe Ramseyer’s right to academic freedom should be protected.

“We think academic freedom is very important. Whether it should be taken down should be decided by academics that are qualified to really judge the merits of this paper,” said Nam, a recent graduate of the Law School. “But if found faulty, I think it should absolutely not be published.”

Choe, a third-year student at the Law School, added that critics of Ramseyer’s article should refrain from attacking him on a personal level, and instead focus on the article and its logic.

Sara Kang, a History Ph.D. student who is assisting Gordon and Eckert’s effort to draft a response, wrote in an email that while it is important to respect Ramseyer’s academic freedom, his article is “problematic on so many fronts.”

“Academic journals have a responsibility to publish work that is well-researched and competent based on the system of peer review,” wrote Kang, who studies Japanese and Korean history.

The Harvard University Korean Student Association has insisted that the article be retracted from the journal.

In a condemnation of Ramseyer’s article published on its website in Korean Monday, the association requested the paper’s withdrawal, recognizing the “gravity of misportrayal of historical facts” and the article’s impact on the victims of Japanese sex slavery.

KSA President Woowon Chung, a Graduate School of Design student, said in an interview conducted in Korean that it is important to consider the impact that Ramseyer’s exercise of academic freedom may have had on victims, especially if the article caused a reprisal in denials of their trauma.

Sangmin Kim, a third-year Harvard Medical School student and vice president of KSA, added that he wanted to “emphasize the fact that this is bad science.”

With more than 9,000 signatures as of Saturday afternoon, the petition calls on Ramseyer to apologize, for the journal to withdraw his paper, and for Harvard to take disciplinary action against Ramseyer.

The Harvard College Korean International Student Association also circulated a Harvard-wide petition Tuesday demanding an apology from Ramseyer, an acknowledgement of the issue by University President Lawrence S. Bacow and Law School Dean John F. Manning ’82, and a statement from the journal regarding the article’s shortcomings. The petition also urged the journal to consider withdrawing the article.

Hye Rin “Lina” Cho ’23 started her own Change.org petition Monday demanding apologies from the journal and Ramseyer, which has more than 500 signatures as of Saturday.

In an emailed statement, Cho wrote that the journal’s response is a “step in the right direction,” but asserted the journal should also retract the article.

“The journal publishing his article anyway is giving credibility where it isn’t due, and granting space where it’s not deserved,” she wrote.

Woohee Kim, an incoming Harvard graduate student, also organized an open letter, welcoming any signatory who self-identifies as “a feminist scholar, student, or alumni of a higher education institution.”

Unlike other circulating petitions and statements, Kim’s letter — which has amassed nearly 900 signatures from both individuals and organizations as of Saturday — was directed toward higher education institutions, rather than Ramseyer or the journal.

“The open letter calls on the need to address the implications of academic knowledge that upholds sexist, patriarchal, and colonialist perspectives at the expense of uncovering the deeply entrenched, interlocking systems of oppression,” Kim wrote in an emailed statement.

Beyond Harvard, the paper has drawn increasing criticism from public officials and groups, including U.S. Representatives Young O. Kim (R-Calif.), Michelle E. Steel (R-Calif.), and the Council of Korean Americans, a national nonprofit.

On Twitter, former White House ethics lawyer Richard W. Painter ’84 called for the paper to be taken down.

Some student organizations used the controversy as a teachable moment. On Tuesday, APALSA and KAHLS held a documentary screening of “Shusenjo: Comfort Women and Japan’s War on History” and hosted a conversation with director Miki Dezaki, according to Hong.

Despite a groundswell of activism against Ramseyer, and student calls for Harvard to respond to the backlash, top University officials have remained silent on the issue.

“You have to wonder why they’re keeping silent,” said Yumi Lee ’21, co-president of the Harvard Korean International Students Association. “Harvard should take some definite course of action in responses because not doing so will indicate some sort of complicity.”

Cho, the undergraduate who started the Change.org petition, wrote in a statement that the issue “is not going to be swept under the rug quietly.” 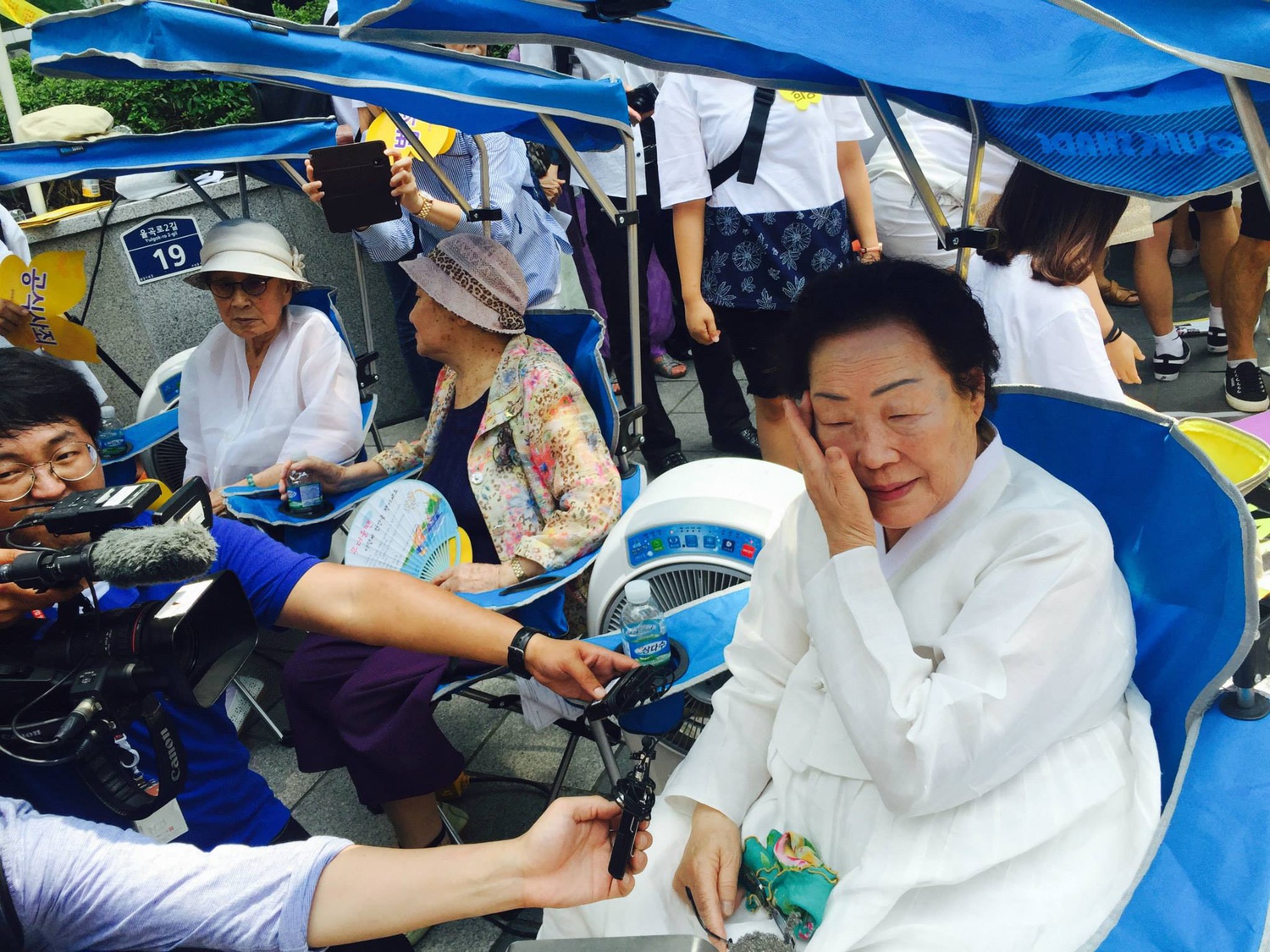 Lee Yong-soo, a former comfort woman and activist, seen at a protest in Seoul. Lee will speak at a webinar organized by the Harvard Asian Pacific American Law Students Association on Tuesday. By Courtesy of Joseph L. Choe

“All I need to do is get the message out as far as possible, and I trust that people will respond,” she said.

Ramseyer did not respond to questions about student demands to have the article taken down.

Harvard spokesperson Jonathan L. Swain deferred to Harvard Law School spokesperson Jeff Neal for comment. When asked on Saturday about Ramseyer, student demands, and if the Law School would take any action, Neal declined to comment.

Choe, the Law School student, said he believes speaking out against the paper is important to shape future scholarship.

“What we wanted first and foremost was to disincentivize and prevent future publications like this from coming out, whether from Ramseyer or from others,” Choe said. “We wanted to hold accountable him and anyone else even remotely thinking about silencing these victims of sexual slavery.”