A trio of burgers on display at Nu Burger, a new burger venture that re-opened as a ghost restaurant, after originally being in Time Out Market Boston, by Anoush’ella’s owners Nina and Raffi Festikjian. By Courtesy of Nu Burger Team
Advertisement
Advertisement

The Ghosts of Restaurants Past, Present, and Post-Pandemic

As the traditional brick-and-mortar-based model collapsed due to the pandemic, restaurants pivoted online, sparking a wave of attractive, easy-to-launch “ghost restaurants” vying for sales and survival.
By Felicia Y. Ho

Dust settles on sprawling tables where diners once dug into shared platters elbow to elbow, a scene most restaurants now recall only as a distant memory. After Massachusetts issued a state-wide shutdown of all bars and restaurants on March 17, 2020, restaurants felt the impact immediately: no customers meant no sales, and no sales meant dozens of furloughs, lay-offs, and closures. As the pandemic dragged on, restaurant staff scrambled to keep up with the ever-shifting indoor and outdoor dining guidelines; they would rush to rearrange spaces and bring back employees, only to clear out dining spaces just weeks later as cases climbed. As the traditional brick-and-mortar-based model collapsed, restaurants pivoted online, sparking a wave of attractive, easy-to-launch “ghost restaurants” vying for sales and survival.

Also called ‘cloud kitchens’ or virtual kitchens, ghost restaurants are open for takeout and delivery only. While the concept itself is not new, the rise of convenient delivery service further bolstered by stay-at-home orders and the demand for fast casual meals have catalyzed a recent surge in options. Boston is no exception, as restaurants branch out, market, and launch dozens of these projects through social media and delivery apps. 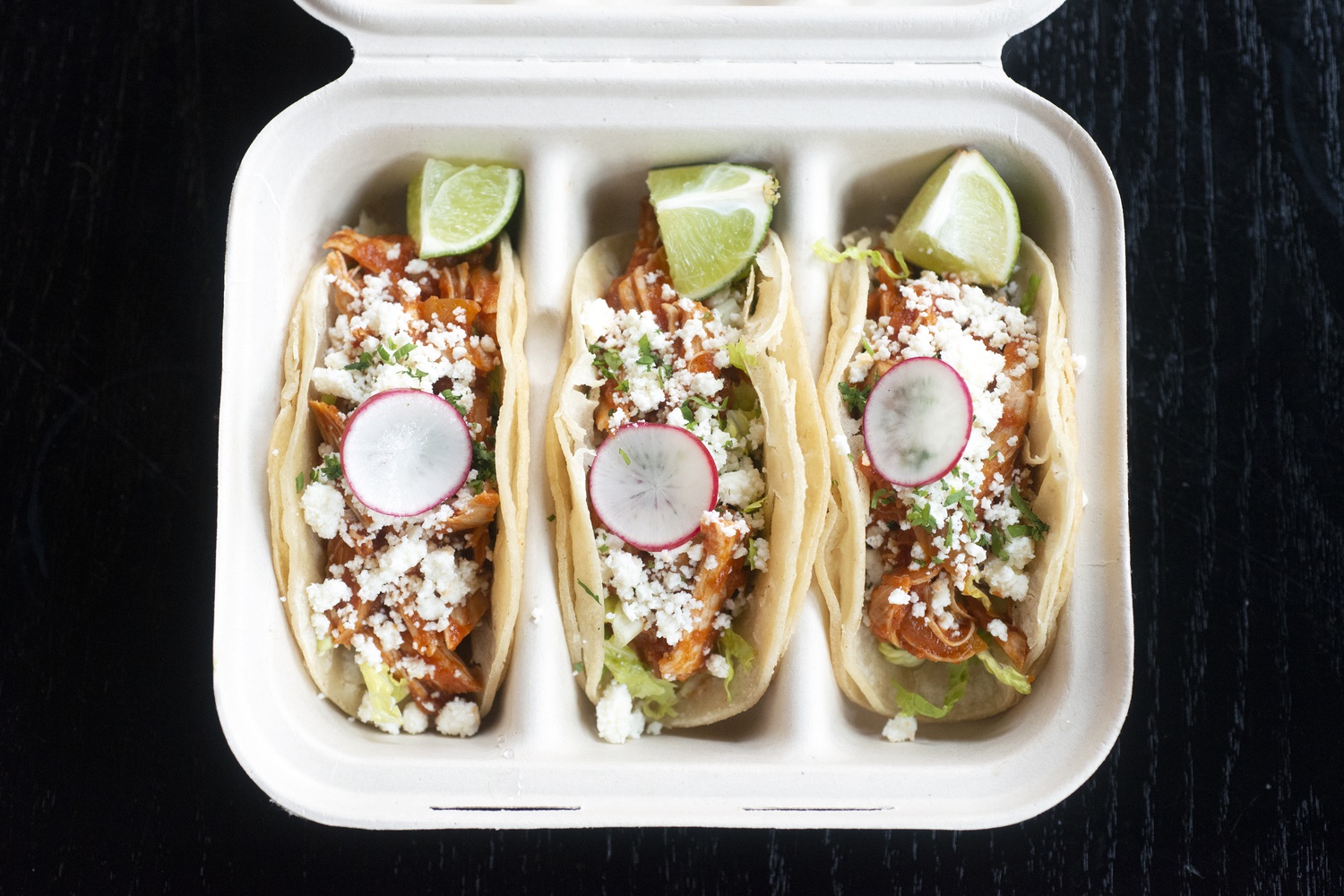 Take La Ventana, a concept from award-winning chef Jeremy R. Sewall, who runs American seafood staples like Row 34 and Island Creek Oyster Bar. Calling itself a “semi-authentic” taqueria whose name embodies the idea of a “takeout window,” La Ventana is the brainchild of one of Sewall’s chefs from Mexico and is a creative culinary outlet that primarily draws from its own pantry, minimizing the restaurant’s reliance on outside resources.

Chef Ronald S. Liu from Blackfin Collective, a consulting firm that has opened several ghost and brick-and-mortar spots in the past few years, also sees these projects as a unique opportunity to boost a developing Asian food scene in Boston.

“People here on the East Coast are not second- or third-generation immigrants. So there’s a bit more resistance to food that is not ‘authentic,’ and there’s a constant battle between wanting to represent the culture and surviving,” Liu says. “Our priority has always been representation. We want to keep pushing the envelope and improving on the cultural experience using food with Asian-inspired ingredients and backgrounds.” Last year, Blackfin opened Nani Chick’n Bunz, a Japanese fried karaage chicken sandwich ghost restaurant, and is launching Taico, a Taiwanese-Mexican taqueria, later this year. 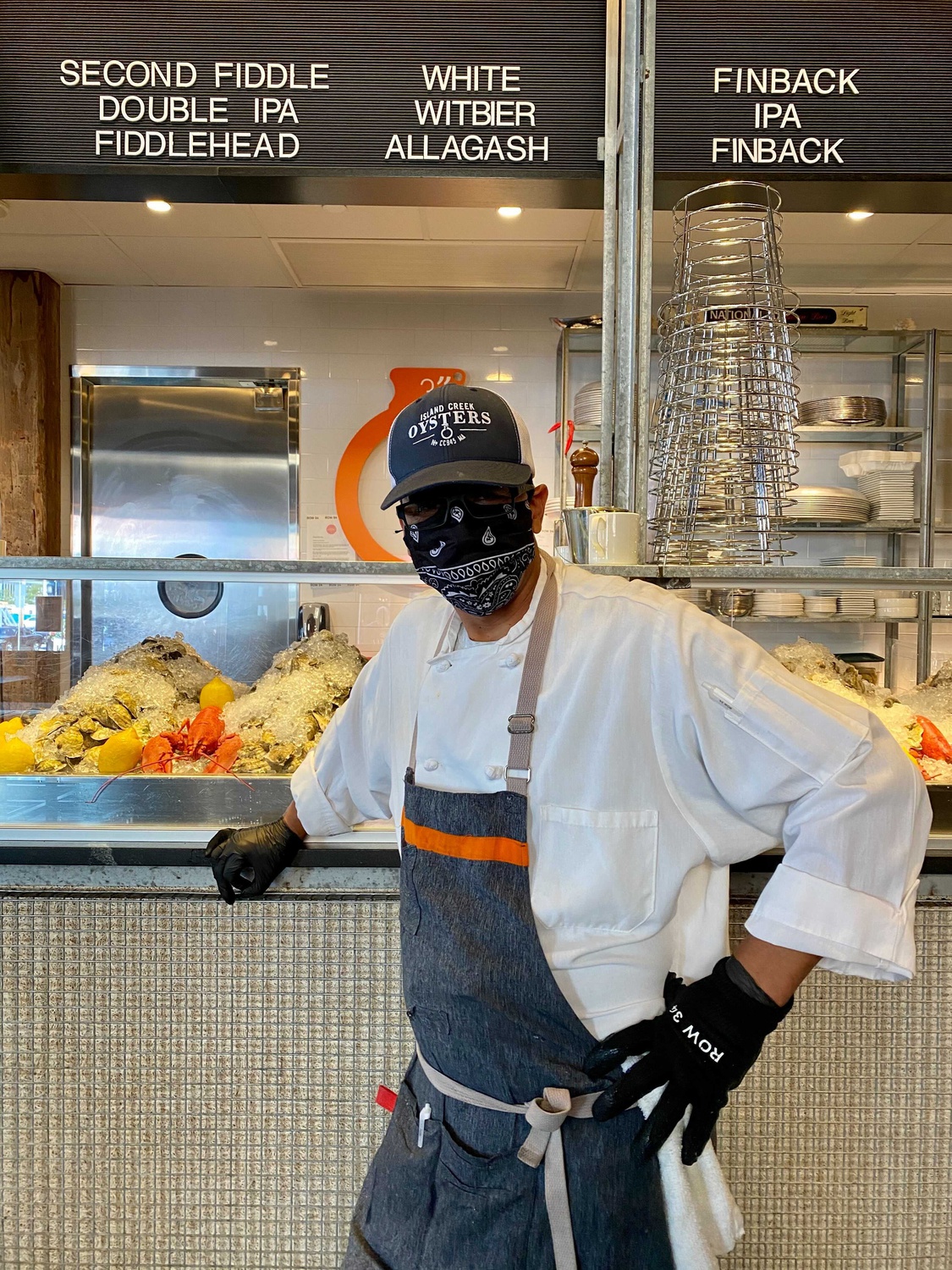 A member of the kitchen staff stands at the counter of Row 34, one of two restaurants by award-winning Chef Jeremy Sewall; he opened the ghost restaurant La Ventana recently. By

During the pandemic,the main mission of these ghost restaurants has been to bring back as many employees as possible and to keep paying rent. Raffi and Nina Festekjian — named one of Boston’s cutest culinary couples in 2018 — opened a burger restaurant, Nu Burger, in Time Out Market last August. But after Time Out Market went “into hibernation” for the winter, they reopened Nu Burger as a ghost restaurant.

“You have the staff, you have the capacity to do it, and you want to continue the brand so it doesn’t die. It helps create brand awareness and keeps my employees,” Raffi Festekjian says. “I have good employees trained who you could lose six months later, so it’s important I open and stick around to make ends meet.” 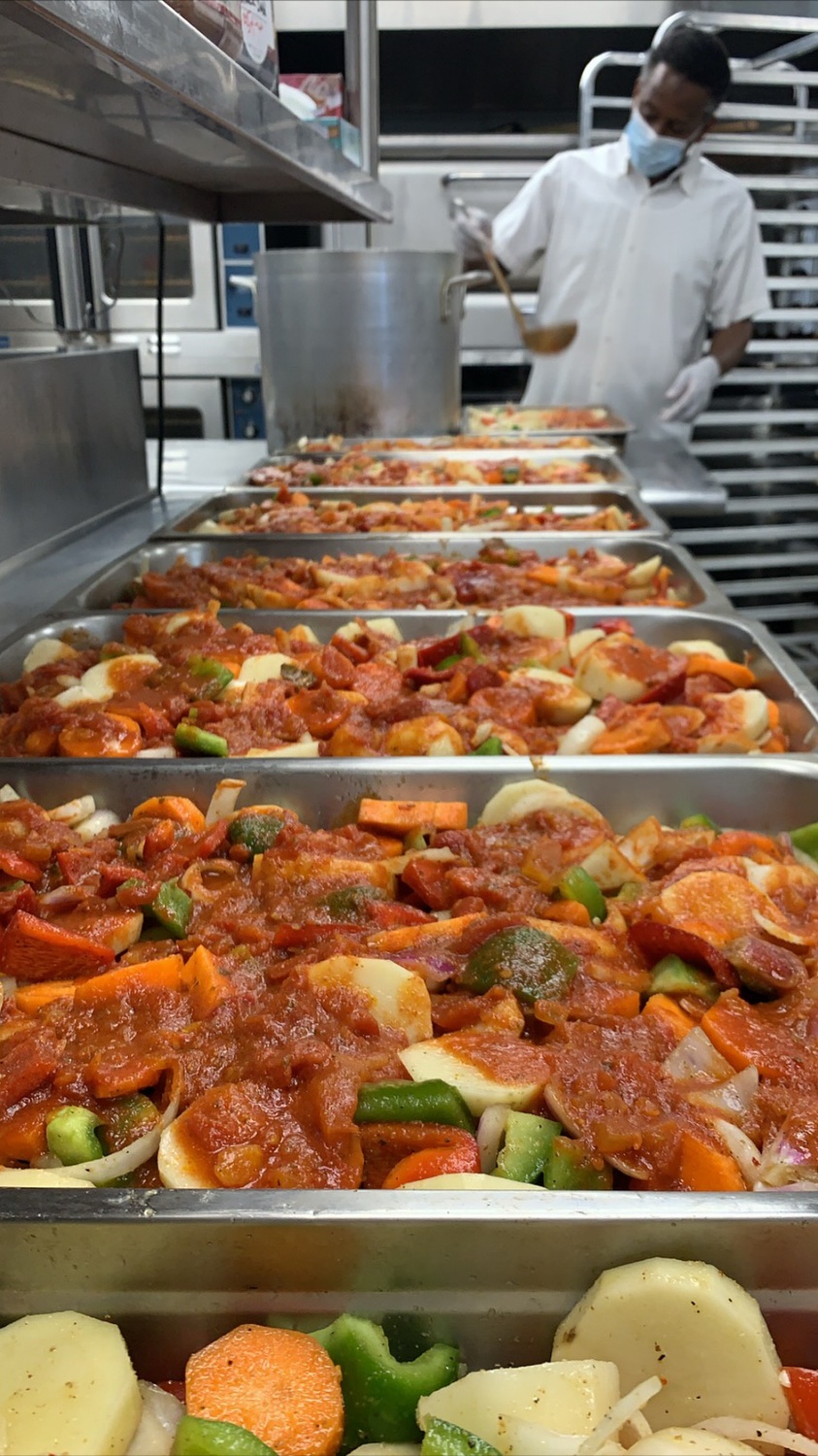 While the freedom offered by ghost kitchens to create with minimum startup fees is attractive, drumming up significant hype for their potential to alter the restaurant industry, starting and sustaining a ghost restaurant is a rocky road filled with logistical and financial potholes. Encouraging people to go out of their way and try new food is a major hurdle in a crowded field, Liu says, and newcomers also tend to rush blindly into the red tape of legality and liability, particularly with the risk of employee infections.

Delivery apps are mainstays for ghost restaurants, but exorbitant fees of 15 percent or more cut into already hard-to-earn profits. While some owners like Raffi Festekjian had already integrated with the delivery ecosystem pre-pandemic, Sewall speaks for the vast majority of restaurateurs: “I don’t love them by any stretch of the imagination. The fees and the money they are charging make it really difficult to do business with them. Long-term, it’s just not possible to operate with these services.”

While the boom of ghost restaurants may bust due to the unsustainable business model, the pressures of the pandemic have already shifted the restaurant industry in a different manner: bringing restaurants and the local community closer together.

“One of my neighbors, she’s been just an angel. She takes orders from everybody, drives into our restaurant on Fridays, and delivers food to everybody’s house,” Sewall says. As the community rallies around favorite local spots, restaurants, too, are giving back with hundreds of thousands of free meals to homeless shelters and hospitals in the area.

Roz O. Freeman, Director of Entrepreneurship at the Boston-based food business support organization Commonwealth Kitchen, particularly believes in the power of cross-restaurant partnerships. During the pandemic, Commonwealth Kitchen launched CommonTable, a program that funds a network of independent restaurants owned by immigrants, and people of color to prepare meals for community organizations. 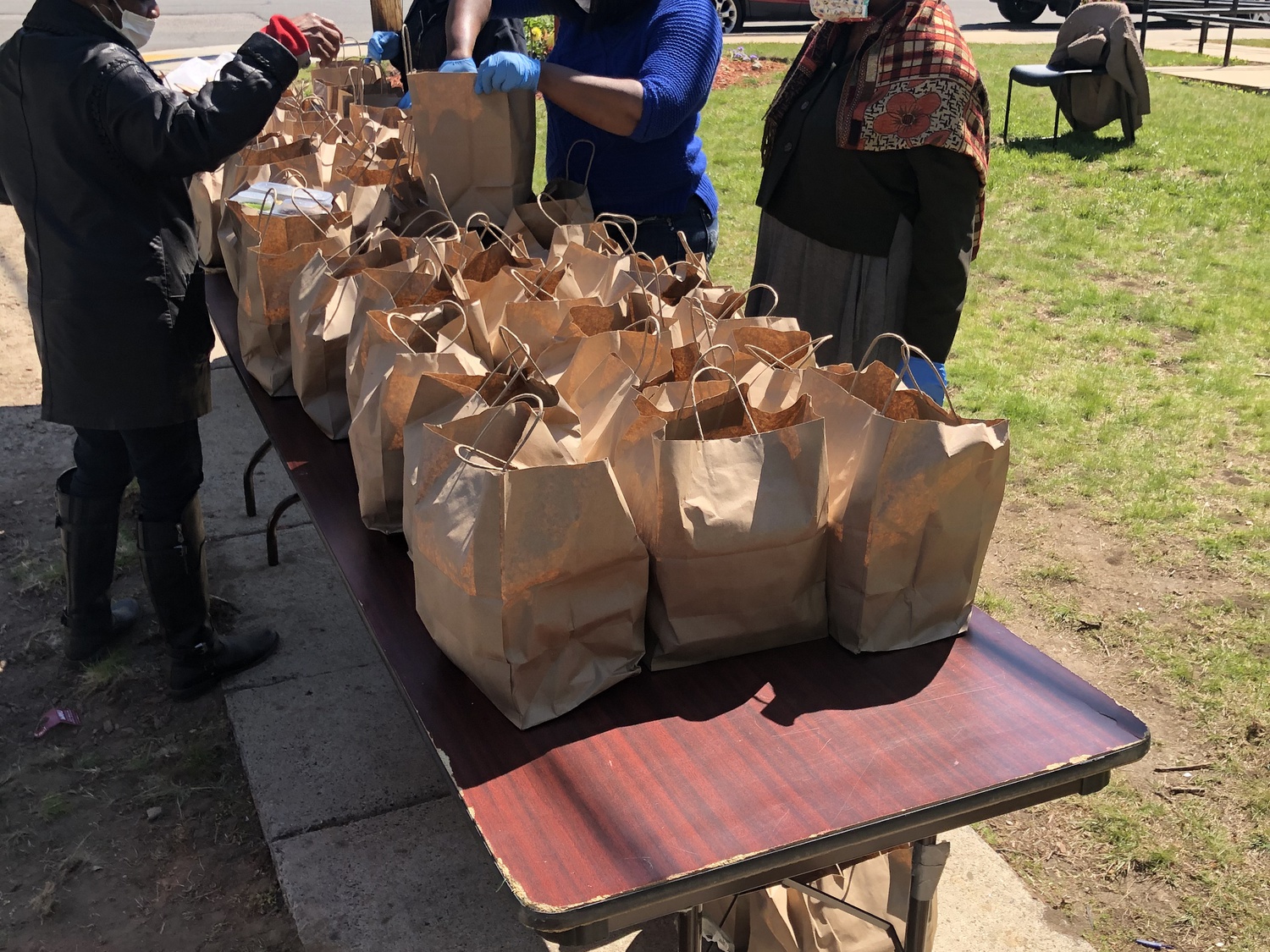 In addition to delivering meals, CommonTable connects its city-wide network of restaurants together on weekly Zoom calls to chat about business and check-in emotionally.

“These restaurant owners have now gone to see each other’s spaces, and help others think about setting up their space differently to account for Covid flow, or help out with their point-of-sales system,” Freeman says. “By continuing to meet on a regular basis, we make sure that they have this space to create and connect.”

Building off of this program’s success, Commonwealth Kitchen is now preparing to launch the Restaurant Resiliency Initiative, which will fund a cohort of eight restaurants and create a broad network of continued support. The program’s Facebook group will especially encourage members to share and carry on teamwork strategies developed during the pandemic, like group purchasing of food and raw materials, to the post-pandemic world.

As the Boston community approaches such a world, local restaurant owners are eager to dust off the tables and welcome diners back to bustling kitchens and bars. Traditional brick-and-mortar eating establishments — from the locals’ go-to diner to the avant-garde fusion sushi place — will thrive once more as ghost restaurants may fade back into culinary side projects. 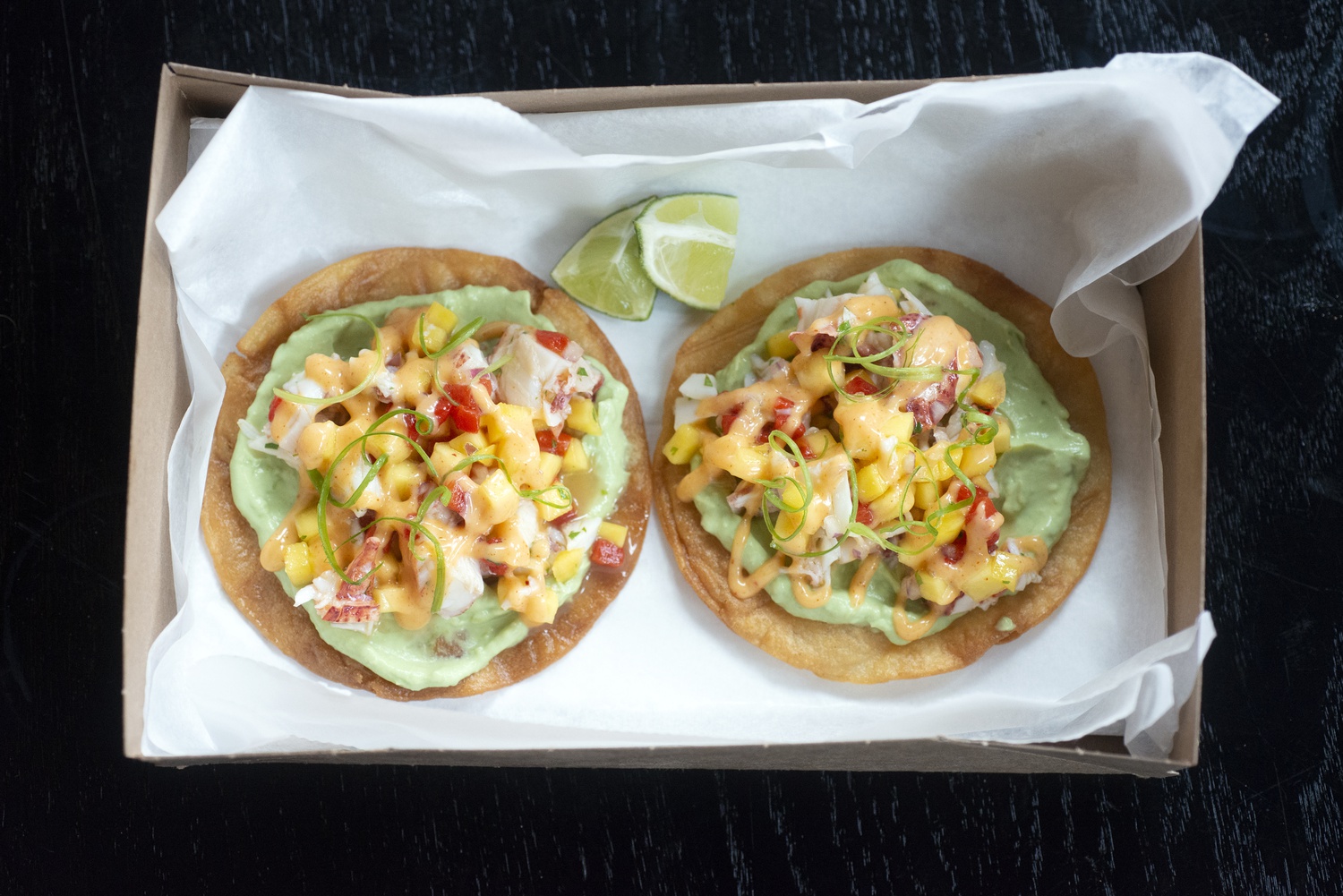 The Lobster Tostada is one of the menu items at Chef Jeremy Sewall’s La Ventana. By Courtesy of Michael Harlan Turkell

“I hope this doesn’t scare off people who want to open their own little place for the first time and do something that is unique and special,” Sewall says. “The diversity of the restaurant industry has been one of its greatest strengths and something I really love about it.”