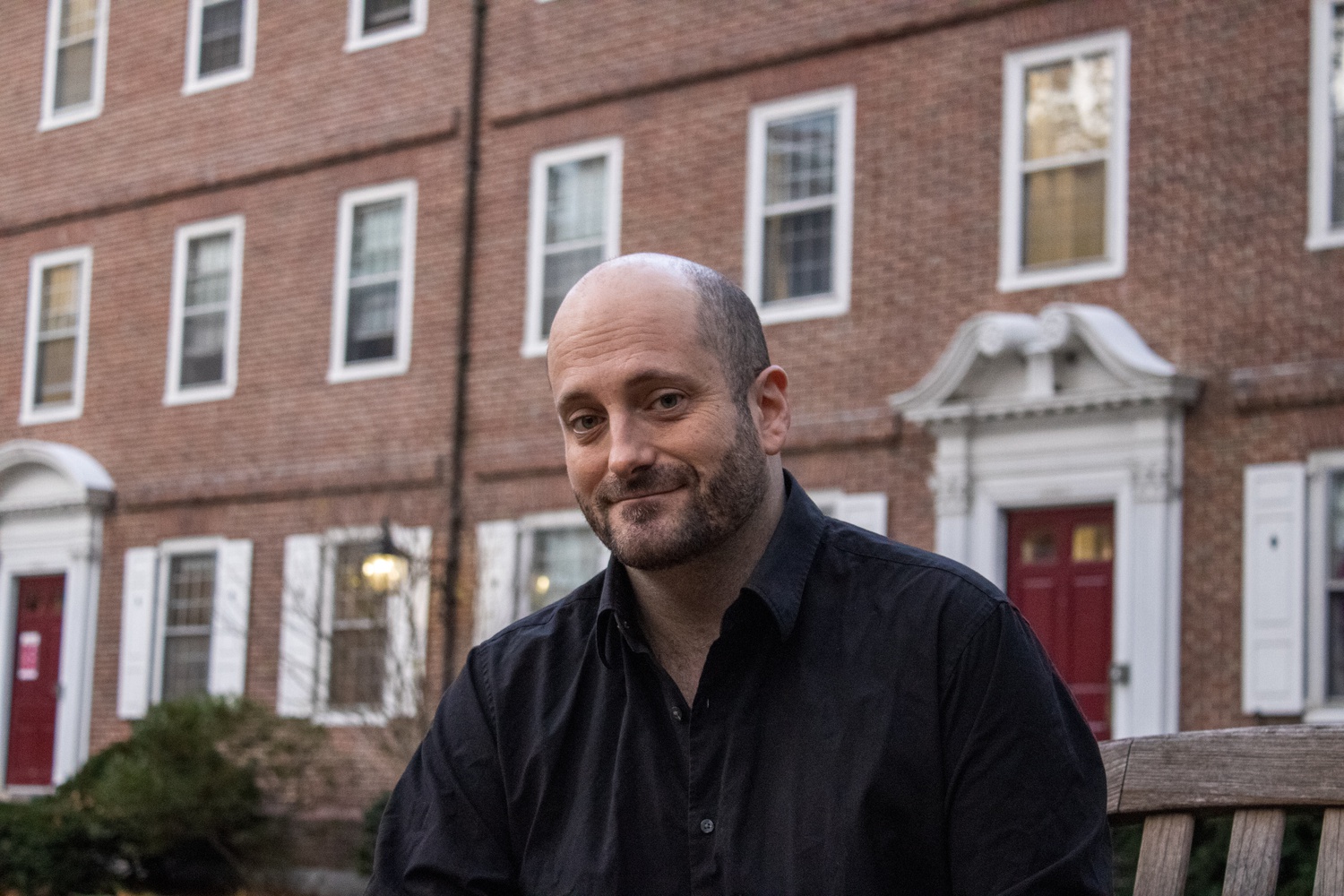 The Poet Above the Dining Hall

On the floor above the Kirkland Dining Hall, in a room I never knew existed, Kevin B. Holden ’05 lives in a suite with a view of the House’s main courtyard. He is not the first poet to occupy the room — a plaque on the door recognizes Elizabeth Bishop’s stay in the same apartment in the 1970s. He has resided in it for the past seven years, when he returned to the University as a Kirkland House Writer-in-Residence.
By Josie F. Abugov

On the floor above the Kirkland Dining Hall, in a room I never knew existed, Kevin B. Holden ’05 lives in a suite with a view of the House’s main courtyard. He is not the first poet to occupy the room — a plaque on the door recognizes Elizabeth Bishop’s stay in the same apartment in the 1970s. He has resided in it for the past seven years, when he returned to the University as a Kirkland House Writer-in-Residence.

I met Holden at a Kirkland junior dinner. When I expressed how naïve I felt not knowing my House had a Writer-in-Residence program, he assured me that most students are unaware of “these kinds of quirks” within the House system. Even Holden still finds himself discovering “tucked away” spaces and “libraries within libraries” around campus.

As a student, Holden lived in Winthrop House and studied Comparative Literature and Philosophy, but all of his pursuits outside of class revolved around poetry. He wrote poetry, served on the Advocate’s Poetry Board, was the editor-in-chief of the defunct poetry magazine the Gamut, and worked on the Present!, another poetry magazine which he describes as “really experimental and weird.”

After graduation, he got an MPhil at Cambridge, an MFA at the Iowa Writers Workshop, and a Ph.D. in Comparative Literature at Yale. When he returned to Harvard a decade after leaving, as a writer-in-residence and a junior fellow in the Society of Fellows, he was struck by both an intimacy and a nostalgia with the places he once knew so well.

“It interests me that a place, so specific, can feel very much coextensive with you, but it also was with others,” he says. “This is really obvious, but when you really try to get your mind around it, it’s a little bit uncanny.”

He recalls how strange it was to walk across campus — past Winthrop House, Grays Hall, the Advocate, the Signet. “When I did come back, a fair amount of time had passed that it felt like a sort of different place. But there is nostalgia and there are sort of these phantom memories,” he says. “It sort of sometimes feels like you’re seeing ghosts of your past, not in a bad way but in a nice way.”

Since returning, he’s found that the academic liberty of the residency program and the Society of Fellows has allowed him to explore the interests he naturally gravitates towards. He’s been focusing on honing his stylistic approach to poetry and writing about English-language poetry from the 1980s and ’90s.

“That was very telling to me, that though I love scholarly work, it’s not entirely where my heart is,” he says. “When I had the time and freedom, I was really mostly just working on poetry.”

Holden’s new book of poetry will be published next winter with NightBoat Books. In the meantime, he’s writing more poetry, as well as a few pieces that sit “in between genres” of creative nonfiction and scholarly articles. The topics of these essays are wide-ranging: the “asymmetry and emergence” of Leslie Scalapino’s poetry, aspen groves, the aesthetic theory of Theodor Adorno, and the geometry of crystals.

Though he’s focusing on writing, he also does translations — he just finished translating a book of French poetry set to come out in the fall 2022 — and produces texts in queer theory and philosophy. Scholarly or purely creative, much of his work contends with the nature of poetic language. His dissertation, for instance, interrogated how the strangeness of poetry relates to the non-human: “the organic, the mineral world, and the angelic.”

When Covid hit last year, Holden stayed on campus. “It really felt like all the air had been sucked out of the room,” he recalls. “Like a vacuum, it just went so quiet so quickly. And the Houses kind of felt like you were in ‘The Shining’ or something — just emptiness.”

Like many of us during this time, he cultivated a habit of long afternoon walks. He’d amble along the river in early spring, trek all the way to MIT, and get lost in Kendall Square. Sometimes, Cambridge was so vacant that he’d walk down Memorial Drive in the middle of the road.

But while the desolation of last year was an aberration, Holden has grown accustomed to the coming and going of students since returning to Harvard. “It’s just the rhythm of the year,” he says. During his seven years in Kirkland, he’s advised students in the humanities, hosted literature tables within the house, and continues to serve as a BGLTQ tutor. He’s witnessed the coming and going of traditions — he remembers when a student he was close to started Haunted Hicks, the haunted house that evolved into an annual event; and sitting by the fireplace with his freshman year boyfriend, back when students could use the fireplaces in their rooms.

Every year, Holden watches students discover and rediscover quirks and hidden spaces within Kirkland House and throughout the school, and finds himself struck by the fluidity of institutional memory.

“Maybe a good metaphor here is a palimpsest, right?” he says. “There are these layers, and you have their echoes — their echoes of the past.”