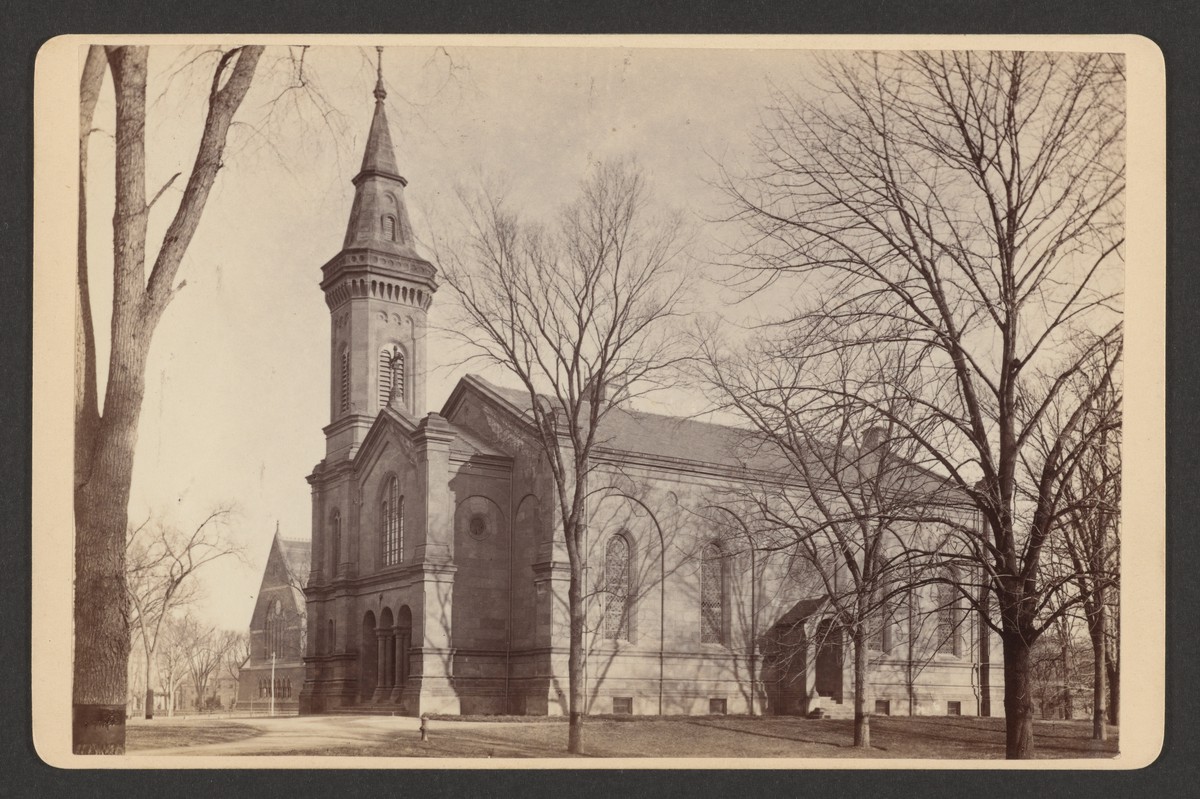 At the front of the Memorial Church sanctuary, partially sequestered by an intricately-carved wooden panel, lies Appleton Chapel. Appleton is a beautiful corner of campus — and a piece of history — that few Harvard students ever experience. But it’s one of the places I feel most at home.
By Maliya V. Ellis

At the front of the Memorial Church sanctuary, partially sequestered by an intricately-carved wooden panel, lies Appleton Chapel. In the morning, pale light streams in through the large, Palladian window; the dawn redwood tree outside casts its shadow on the hardwood floor. Unlike in the church’s main sanctuary, Appleton’s pews face each other, rather than the altar, made for antiphonal singing and immersive listening. Organ pipes lie beneath the wall’s ceramic panels. Iron candelabras stand at the end of each pew; during evening services, they fill the space with a flickering, orange glow.

Memorial Church, as its name suggests, was constructed in 1932 as a memorial to World War I victims. But before Memorial Church there was another church: Appleton Chapel, the stone, ivy-covered chapel that housed the University’s religious services for 73 years. Though beautiful, the small chapel was razed in 1931 to make space for the larger, grander church that presides over the Yard today. Today’s Appleton Chapel is its own memorial, preserving the name of the Memorial Church’s predecessor from within its brick walls.

Appleton is a beautiful corner of campus — and a piece of history — that few Harvard students ever experience. But it’s one of the places I feel most at home.

At 8 a.m., four mornings a week, I make my pilgrimage. Bleary-eyed and yawning, I speed-walk up Bow Street, across Mass Ave, and through the deserted Yard. I join 15 other sleepy students in the choir room under Appleton. Together we are the Choral Fellows, reporting for the equivalent of the early shift: Morning Prayers.

We stretch, warm up, glance over the piece for that day — usually a four-part motet, often in Latin. After a half hour, the conductor has usually managed to transform our early-morning croaking into something like music, and we get ready to head upstairs. I don my floor-length, black-and-red choir robe, and my body relaxes into this forgiving cocoon. As the organ prelude begins, we process in two lines, a la Madeline picture books, into the sun-drenched chapel.

I peer out at the congregation — around 25 regulars by my count, mostly older, either faculty members or Cambridge residents. Usually the congregation would join us in the Chapel, but because of the pandemic, they sit in the Sanctuary. I would prefer proximity, but the distance is a small price to pay for being able to sing in-person: I struggled through three semesters of Zoom choir, rife with lag time and void of any sense of community.

And then we sing. The conductor raises his arms, moves slightly to cue the entrance — and harmony fills the chapel. The last note lingers for a second in the air, before the conductor lowers his hands and we sit for the rest of the 15 minute service.

The order of the service is always the same: a choral anthem, a faculty member’s reflection on an “inspired text,” either religious or secular, and a closing hymn. At 8:45, the Memorial Church bells ring to mark the end of the service. When I rejoin the hustle and bustle of students heading to class, I feel like I’m harboring a secret. I sometimes indulge a small smile: it’s not even 9 a.m. and I’ve already completed a daily ritual most of them have never heard of. 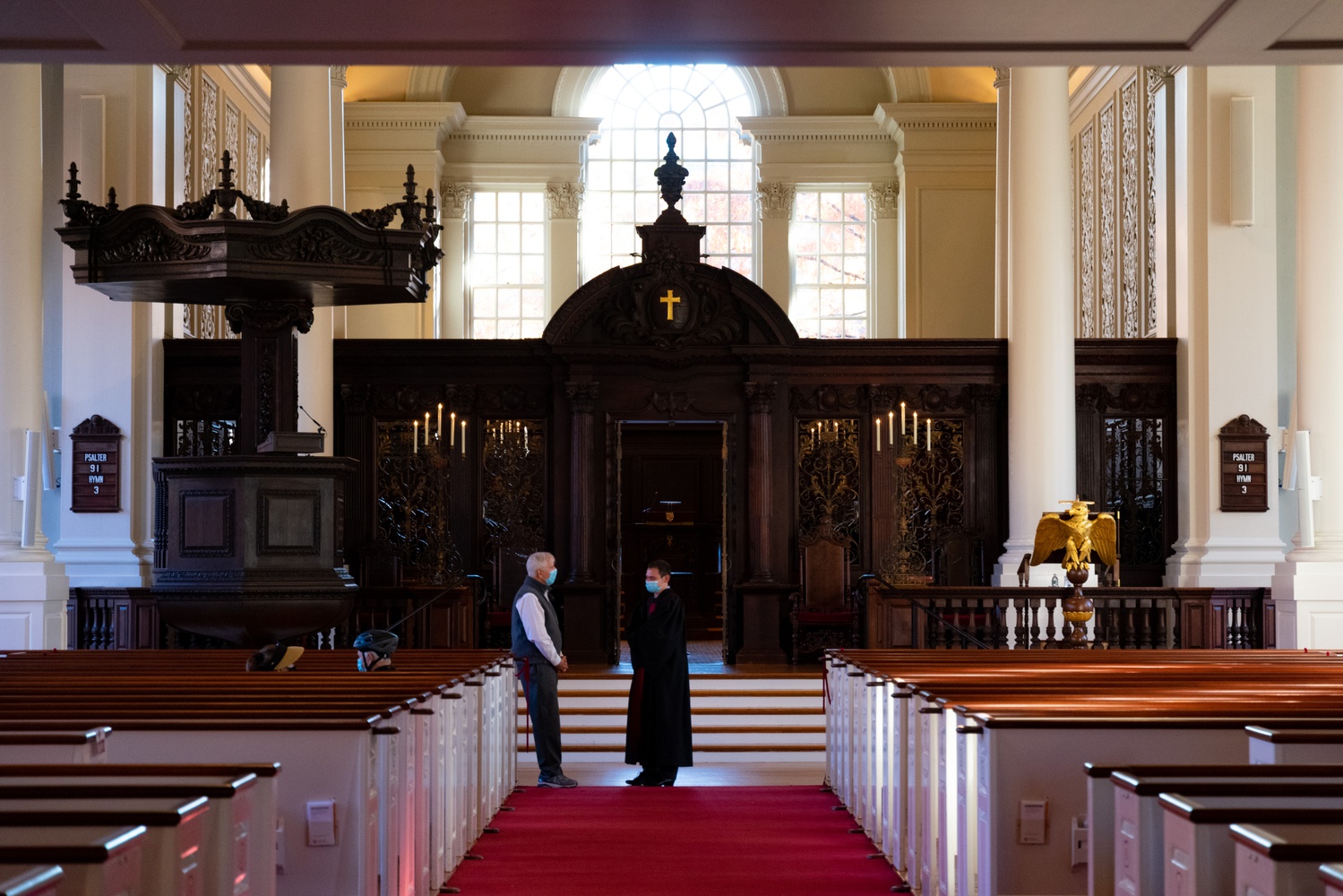 Morning Prayers, now obscure, were once ubiquitous. They have existed at Harvard since its founding in 1636, and for over 200 years, were mandatory for all students, a standard practice among the Ivy League at the time. They were as much about moral discipline as they were about Protestant worship: strict attendance was taken, and late or absent students were publicly named and even fined. It’s not surprising that the practice produced much grumbling from students, who launched several petitions to make attendance voluntary. As an 1885 Yale Literary magazine editorial, republished in The Crimson, bemoaned: “Running from bed to breakfast, and then to chapel, half awake, with a half learned lesson, is it surprising that a man under such circumstances should lose the religious significance of the duty?”

After a widely-circulated student petition gained traction, the Board of Overseers finally voted to make Prayers voluntary in 1886. The petition also defined what it saw as the true goal of the service, a goal it thought voluntary attendance would better support: to “bring the passing and casual under the shadow of the eternal; to make a man feel that amid the confusion of his hurried life, he can lay hold of an unvarying, underlying truth.”

As a Choral Fellow, my attendance at Morning Prayers is compulsory, making my ritual an anachronism. And I’ll admit, not infrequently, the ritual feels like mere routine: I stumble to Appleton, half-asleep, and I’ve dozed through not a few reflections.

But there are also moments when routine gives way to genuine transcendence, even for an agnostic like me, when a reflection will change my perspective, or an anthem will move me to tears. In those moments, I’m reminded of the power of ritual and the importance of a beautiful space, separate from the busy Utilitarianism of campus.

On the first Sunday of this semester, Matthew I. Potts gave his first sermon as newly-selected Pusey Minister of Memorial Church. He stood at the pulpit, robed in white, and addressed the church’s first in-person congregation since March 2020.

“We’ve resumed our ritual activities,” he said, referencing the church’s prayers, chants, and hymns. “They are beautiful, and they are holy.” His voice cracked before continuing: “And we cherish them. We give thanks for them, these beautiful, holy things.”

As the organ swelled and the sanctuary filled with the first notes of the closing hymn, my own voice cracked and my eyes filled with tears — hidden, luckily, by my mask. There was something sacred about the music and the space, something overwhelmingly beautiful about a nearly 400-year-old ritual resumed.