Harvard’s more than 5,000 unionized clerical and technical workers have faced different transitions back to working on campus. Juggling health guidelines as well as employees’ needs and preferences, many departments switched — temporarily or permanently — to hybrid arrangements.
By Cara J. Chang and Meimei Xu 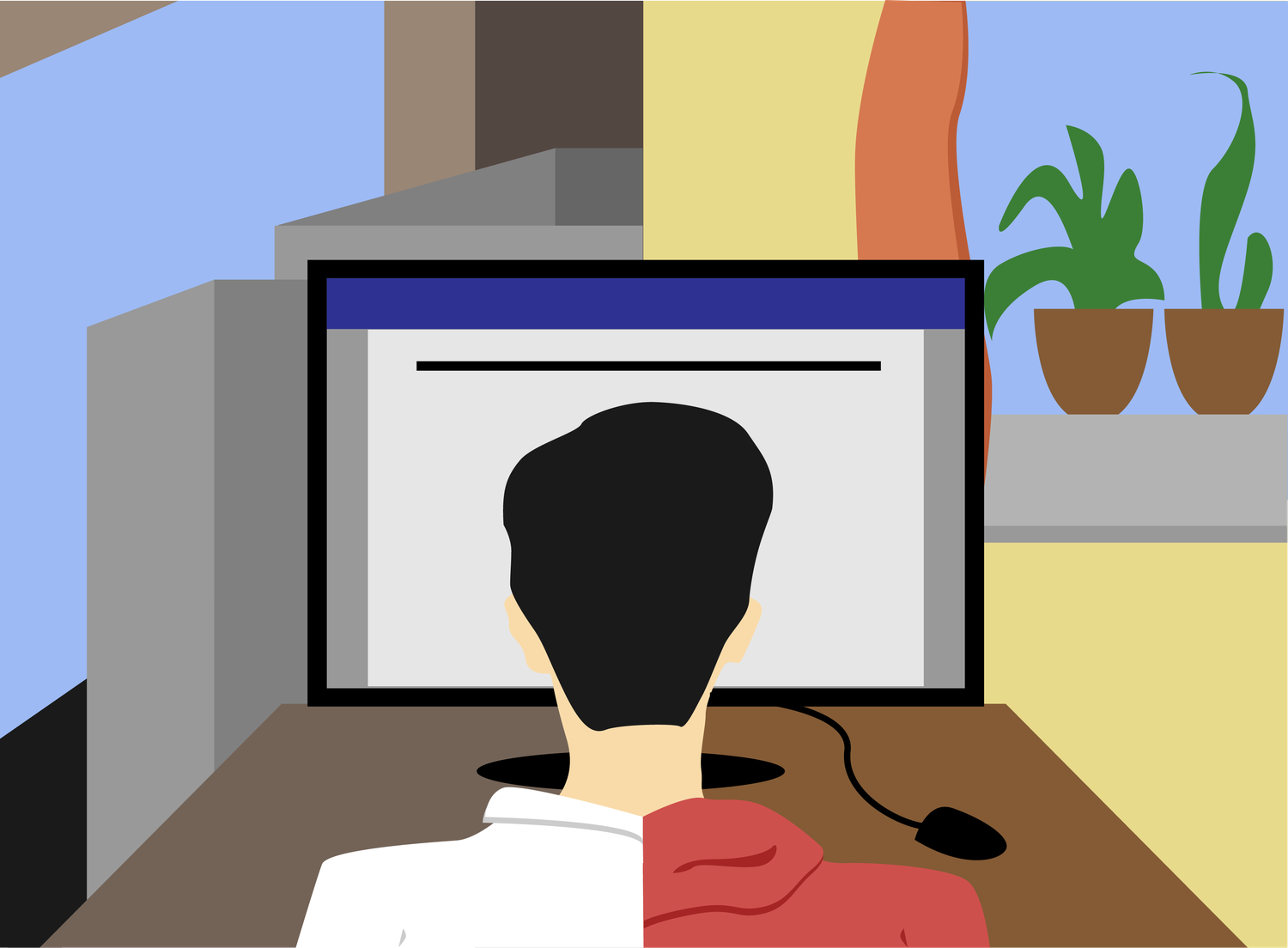 Harvard Medical School executive assistant Sarah E. Hillman took a picture of her desk on March 13, 2020 — the last day she was on campus before transitioning to remote work throughout the coronavirus pandemic.

She remembers sending it to a friend, texting, “I hope I see this again. Bye for now.”

The next time Hillman returned to work in the office was 18 months later, on Sept. 10 of this year.

To this day, not every Harvard employee has returned to working on campus.

At the Graduate School of Education’s Center for Educational Policy Research, project coordinator Juda Smack has not been back to work in the office since March 2020. Instead, he is working remotely from Harlem, N.Y. Smack wrote in an email that he believes his team will likely not return to campus until next year.

Harvard’s more than 5,000 unionized clerical and technical workers have faced different transitions back to working on campus. Juggling health guidelines as well as employees’ needs and preferences, many departments switched — temporarily or permanently — to hybrid arrangements. Within teams, employees often have their own flexible work schedules.

HUCTW President Carrie E. Barbash said she believes the pandemic has made people more open-minded about what work should look like.

“It does seem that Covid has created a cultural shift at many departments at Harvard,” she said. “Managers, HR departments have shifted their mindsets of this so they’re more open to different, creative ways of looking at schedules.”

‘A Wide Range of Experiences’

From March to June 2020, Harvard librarian Michael B. Mellor worked from his dining table. Gradually he returned to working in person, eventually returning full time on Aug. 2 of this year.

Mellor’s colleagues had different timelines for returning to in-person work. Some returned full-time in June 2020, while others came back more than a year later.

“Even in our small library group, there has been a wide range of experiences,” he wrote in an email.

In March, Harvard set Aug. 2 as its target date for faculty, researchers, and staff to begin to return to campus.

More than a month after that August target, library conservationist Katherine Westermann Gray returned to in-person work full time. The time away from the bench fixing pages and book covers had created backlog and unexpected difficulties, she said.

“My muscles for that work have atrophied, and so I’m actually finding that I’m a bit sore trying to do that work again,” she said. 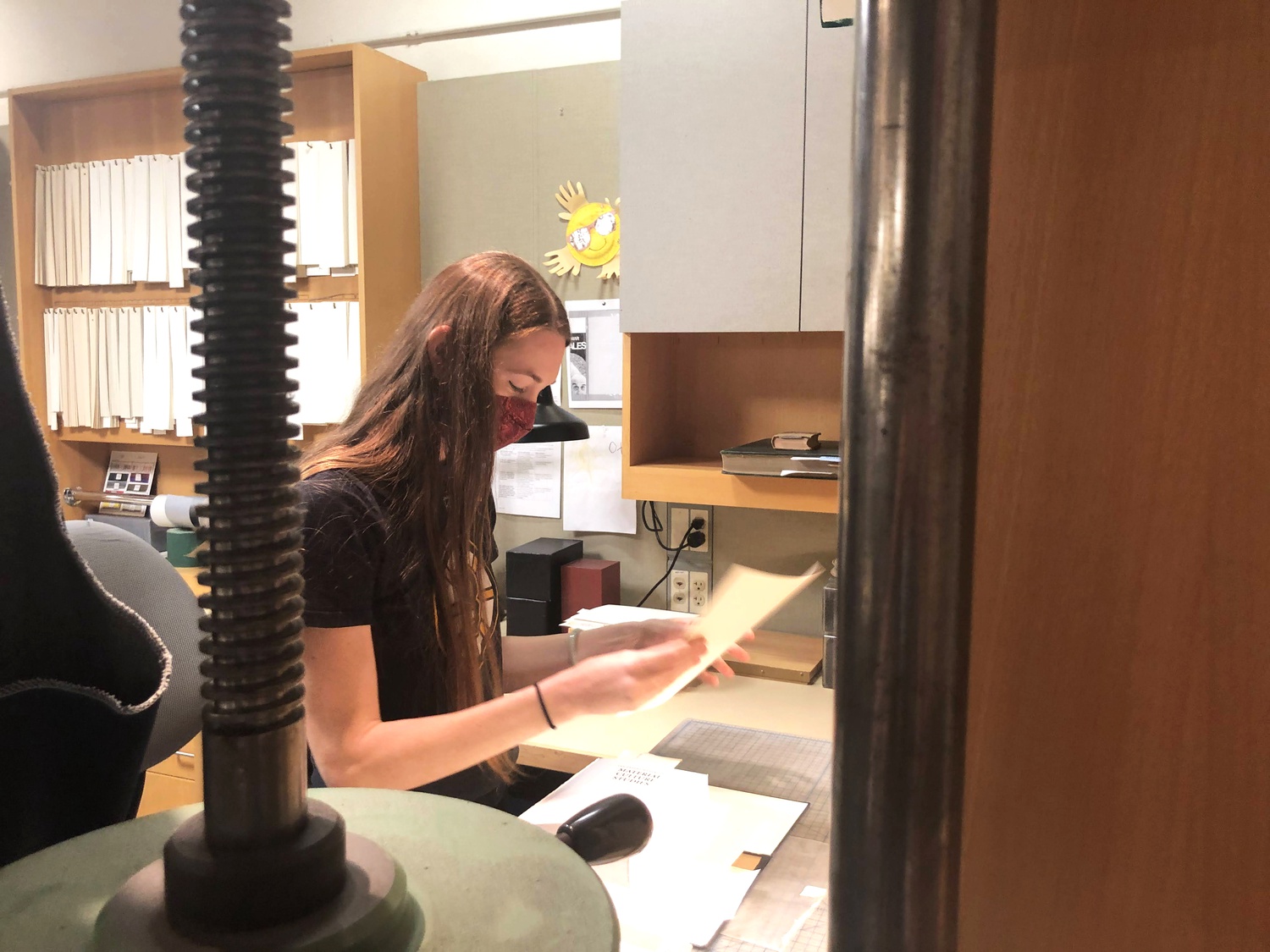 Harvard Library conservation technician Katherine Westermann Gray has returned to in-person work after more than a year-and-a-half at home. Other clerical and technical workers have adopted a range of hybrid or remote work arrangements. By Meimei Xu

While some employees have returned to campus full time, others have continued to split their schedules between home and the office.

Leslie MacPherson, departmental administrator for the Office of Ministry Studies at Harvard Divinity School, returned to campus on Aug. 2 of this year on a hybrid schedule, usually with two days in the office and three days at home per week.

She said the Divinity School helped her create an ideal workflow — the flexibility her current schedule affords her feels like “an amazing moment of balance,” she said.

MacPherson also said spending time back on campus has enabled her to reconnect with students.

“I’m very much an extrovert, so to me, one of the great joys of my job is my coworkers, seeing the students, seeing other faculty,” she said.

Some departments had to delay bringing staff back to campus. Jason D. Gerdom, a senior technical support analyst at the Business School, wrote in an email it took longer than he anticipated for his department to get the office back up and running.

“It’s easy to say ‘return to campus,’ but the work that goes into making that happen is remarkable,” he wrote.

Scheduling when people come in, Gerdom said in an interview, has been a logistical hurdle. He also noted supply shortages have made it difficult to set up the office in an efficient and Covid-safe manner.

Even before the onset of the pandemic, HUCTW’s contract included flexible work options, and union organizers were already trained to help employees negotiate non-traditional schedules. This past August, Harvard announced it would pay state income taxes for employees working remotely in seven additional states on the East Coast.

Building those non-traditional schedules is often a dialogue between employees and managers, and some conversations are smoother than others, according to Barbash.

“We do have a lot of folks who are trying to move to hybrid schedules and for some that’s going really smoothly,” she said. “That’s been great to see. Then for others they’re having some difficulty, either with their department or their supervisor or someone above their supervisor or with HR, in some cases.”

Monica Lesar, an alumni reunion manager at the Business School, said she is grateful for the union’s engagement with members over the pandemic.

“I am so appreciative of all the work the union’s done over the last year to support its members,” she said.

Once Skeptical of Remote Work, Employees Say They Are ‘Converts’

Ahmed Ahmed, an accounting assistant at Harvard University Information Technology, said that though he had his doubts about remote work, he quickly saw the benefits: less commute time and more time with his son.

“I was very skeptical [about] remote work before Covid, but I became a believer and a convert and advocate for working from home, because the work gets done,” he said.

Remote work may have increased productivity — according to the HUCTW survey, 75 percent of respondents said they were more productive working from home.

For Gerdom, at the Business School, the transition to remote work at the start of the pandemic transformed his department’s workflow. When Harvard emptied its campus, Gerdom recalls the department started using a workflow it had previously used for inclement weather days, which was not sustainable.

In July 2020, Gerdom said he and a group of his colleagues approached management with a new workflow model. They suggested dividing all work into two categories: unanticipated tasks that required immediate attention and planned projects. To promote consistency, technicians only worked within one mode.

Management, Gerdom said, was “incredibly receptive” and they began piloting the program in September 2020, refining it over several months. The new workflow proved effective and even boosted morale and customer satisfaction, according to Gerdom.

“Now we’re positioned where we can come back — people can physically be on campus — but we can maintain the workstreams,” Gerdom said in August. “It gives us a lot of flexibility to still be able to work the way we are.”

Some employees have found they prefer working remotely permanently. Kelsey Palmer, a study operations manager at the Medical School, has been working remotely since the start of the pandemic. She said she currently enjoys living on Cape Cod and does not plan to come back to in-person work soon.

MacPherson also said working remotely has had benefits, including eliminating her commute time and enabling her to adjust her schedule based on her workload.

Still, she said she found remote work socially isolating. Especially later in the pandemic, she said she felt her life consisted of waking up, turning on her computer, and sitting in a chair.

Smack, who wants to remain remote in New York, said he appreciates the flexibility of remote work.

“It’s definitely opened my eyes to the fact that having this choice [of remote work] is very helpful for some people, and I hope that it does change the workforce moving forward, that people have more opportunities,” Smack said.