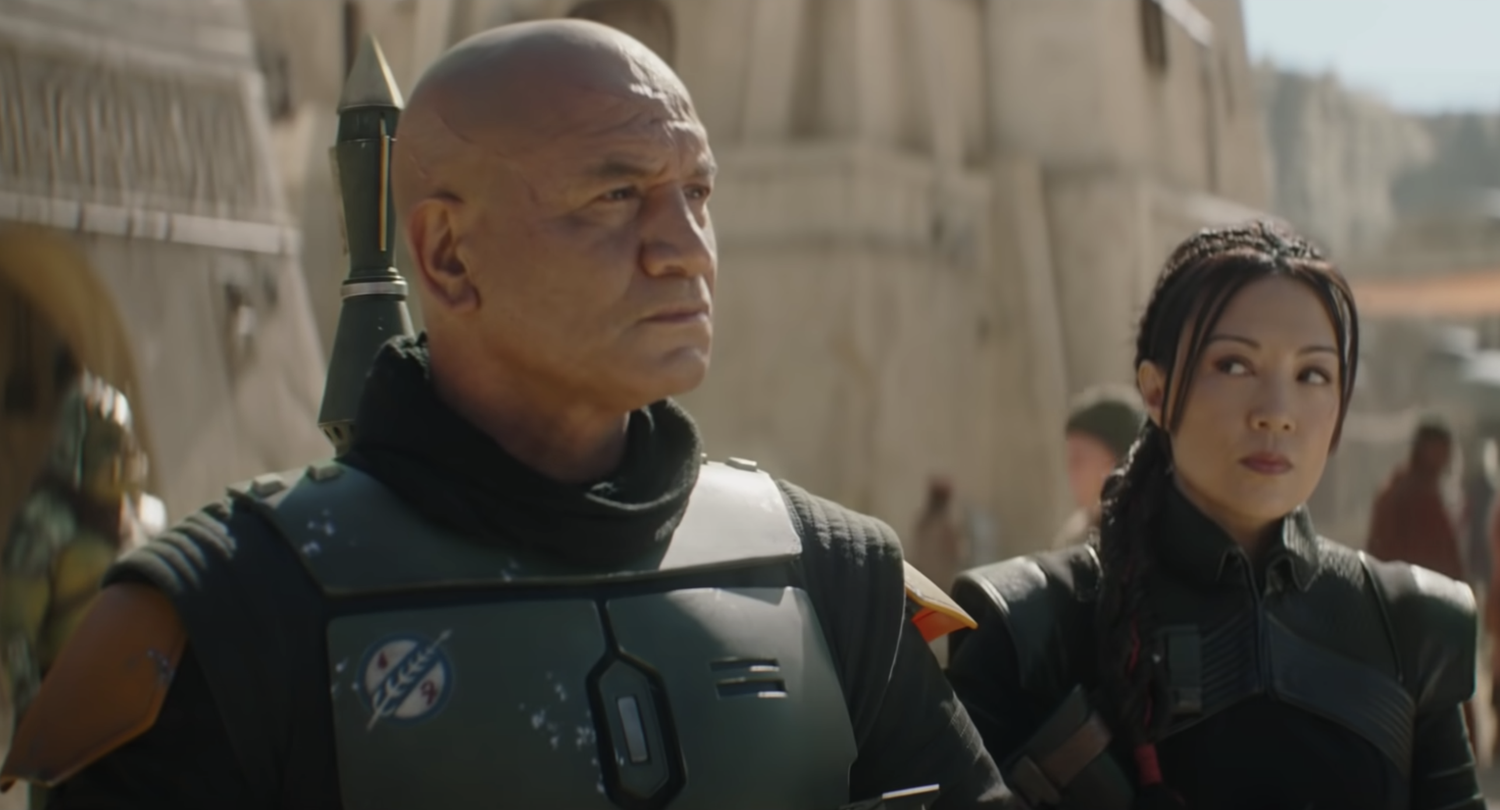 "The Book of Boba Fett" starts streaming Dec. 29 on Disney+. By Courtesy of Star Wars
By Derek Yuan, Contributing Writer

This review contains spoilers for “The Mandalorian.”

The latest piece of Star Wars live-action canon has just dropped a new trailer. “The Book of Boba Fett,” a spin-off of 2019’s critically-acclaimed “The Mandalorian,” has had fans eagerly waiting since the big reveal in the latter show’s finale post-credit scene. Luckily for us, Disney has decided to continue in the creative direction of “The Mandalorian,” exploring other stories in the vast Star Wars universe and diversifying away from the Skywalker-Palpatine storyline which has dominated three trilogies.

Following the events of Star Wars Episode V, Boba was assumed to be dead after Han Solo struck his jetpack with a vibro-ax, flinging him into the sarlacc pit. Season Two of “The Mandalorian,” however, showed that Boba somehow survived that impossible ordeal, even aiding the titular Mandalorian through several escapades. Hopefully, this upcoming show will reveal just how Boba escaped the infamous sarlacc where one would be “slowly digested over a thousand years.”

This trailer opens with the archetypical Star Wars shot of a desert planet, which is quickly revealed to be Tatooine, signified by a scuttling B’omarr monk in the foreground and what was formerly Jabba’s palace in the background. The B’omarr monks, a religious cult group that believes in removing one’s brain from the physical body in order to reach enlightenment, were the original residents of the palace, before being supplanted by Jabba. However, as the show takes place six years after “The Empire Strikes Back,” Jabba has long been dead. This is important to keep in mind for later.

In the next scene, Boba Fett dons his sleek, battle-worn Mandalorian armor with its characteristic green paint job. Here, as in “The Mandalorian,” Boba is played by Temuera Morrison, who also played Boba’s father, Jango, and every clone trooper in the prequels. He brings an old, gruff, forceful, and weathered energy to the show.

In the next clips, we see glimpses of Fennec Shand, Boba’s number two, played by Ming-Na Wen, who is perhaps best known for voicing the cultural icon and badass, main character in “Mulan.” It therefore goes without saying that Wen will bring a distinct charisma and strength to the role of Fennec. Fennec, recall, was fatally shot during the events of “The Mandalorian” Season Two, but had her life saved by Boba Fett through the use of cybernetics. In return, Fennec pledges herself to serve Boba. In this upcoming show, we will likely see her right by Boba’s side as he navigates his newfound cause.

What is this cause? The trailer’s next shots provide some insight into Boba’s aims and desires, setting up the plot for the season to come. “The Mandalorian” left off with Boba Fett shooting Jabba’s main minion in the head. This bossman, Bib Fortuna, had asserted control over Jabba’s empire after his death, but by season’s end Boba is the one sitting in Jabba’s throne. “The Book of Boba Fett” will be the continuation of those efforts. As depicted in the trailer, Boba is now trying to rebuild Jabba’s vast criminal network. Importantly, instead of fear, Boba claims he wants to rule with respect. In one scene, he assembles all of Jabba’s former captains, asking for cooperation instead of infighting and claiming that this approach will make everyone rich. In another scene, however, Boba strongly implies that he will feed those captains to wild animals for their “insolence.” Clearly, Boba wants to fill in the power vacuum left in the wake of Jabba’s death — and do it differently, through respect and mutual cooperation. However, at the same time, Boba can’t help but fall into some of the same tactics brutally deployed by Jabba.

With this exciting peek into what’s to come, only time will tell if Boba Fett can deliver on everything he has promised. Luckily for him, this show serves as the product (and perhaps continuation) of his transition from unforgivable villain who tried to kill Han Solo in the original trilogy to likeable antihero who saved Baby Yoda. Now, for fans and casual watchers alike, Boba Fett posits an exciting new development in the expansion of the canonical Star Wars universe.

“The Book of Boba Fett” hits Disney Plus on Dec. 29. You can watch the trailer here.