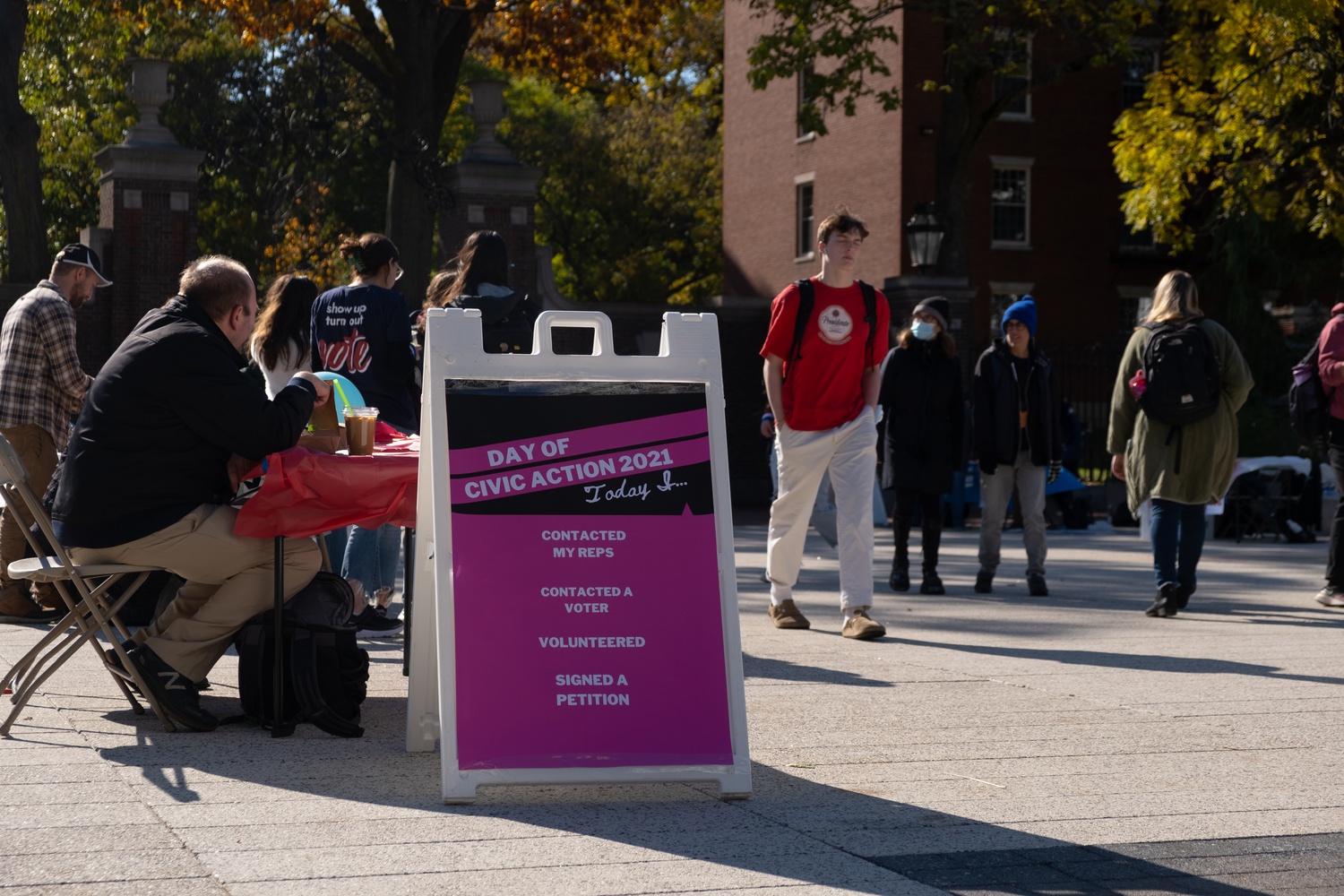 The Institute of Politics hosted its second-ever “Day of Civic Action” on Tuesday in an effort to bolster civic participation among students at the College.

IOP vice president Kevin L. Ballen ’22 said the IOP’s goal for the “Day of Civic Action” was to create “civic pathways” for students year round.

“Consistent civic engagement, knowing who your senators and representatives are, being in touch with them, thinking about the issues that are important to you, and speaking up and advocating is really our hope,” Ballen said.

Student organizer Luis F. Esteva Sueiro ’24 said the goal of the Action Hub – where IOP volunteers positioned at the Science Center Plaza encouraged students to sign petitions, volunteer for campaigns, and vote – was to allow as many students as possible to participate, even if they could only spare a few minutes.

“Everyone's grinding – it’s November,” Esteva Sueiro said. “We just wanted to see if we could get a lot of students to take one small action that could then aggregate to something big.”

Attendee Jenna S. Albezreh ’23 said the Action Hub enabled students to understand that civic engagement does not have to be hard.

“We do have elections happening in the Boston area, so it's really good to see that people are energized, engaged and trying to get other students engaged in the process,” he said.

For the “American Politics 101” workshop in Emerson Hall, students rotated across five rooms, each of which focused on different aspects of American government, including the three branches of the federal government and the country’s two-party system.

Imaan Mirza ’25, an organizer of the workshop, said her experiences growing up in Saudi Arabia sparked her interest in civic engagement among young adults.

“I grew up in Saudi Arabia where there weren’t any mediums or channels through which you could be civically engaged, and so as a young person here, I feel very fortunate to have those channels and means to express my political views, my ideas, my values,” Mirza said. “As young people the onus really does fall on us to exercise all of the avenues of civic engagement that we can.”

Jay Hong Chew ’25, another organizer, added that the workshop was also meant to provide a foundation for international students with an interest in American politics.

“When we talk about politics, perhaps we have neglected the international student population that is interested in American politics but doesn’t have a base,” Chew said. “Without a foundational theoretical base, how much can you understand?”

At the 7:30 p.m. watch party in the Kirkland House Junior Common Room, participants watched the day’s election results – including the Virginia gubernatorial race – over chicken fingers and fries.

Demaray, who attended the watch party as well as the Action Hub, said he enjoyed meeting other students with a “shared nerdiness” for politics while waiting for election results.

Outside of the three main events, the IOP collaborated with the Undergraduate Council to provide grants for other organizations to host events focusing on civic engagement.

One of the organizations, the Harvard College Democrats, held an “Election Day Extravaganza” to facilitate phone banking.

Another, Harvard Global Alliance for Medical Innovation, collaborated with Vot-ER, an organization that works to integrate voter registration into the healthcare system, to host a text bank.

At the watch party, Ballen said the participation in the day’s events — attended by over 500 students, according to Ballen — underscores student interest in civic participation.

“There's a lot of potential for energy outside of major elections that we can cultivate,” Ballen said. “I think people are generally excited to take civic action – it just takes an additional step to get them interested.”