Women’s Volleyball Breezes Past Princeton, Fights Back but Ultimately Falls to Penn in Tight Decider 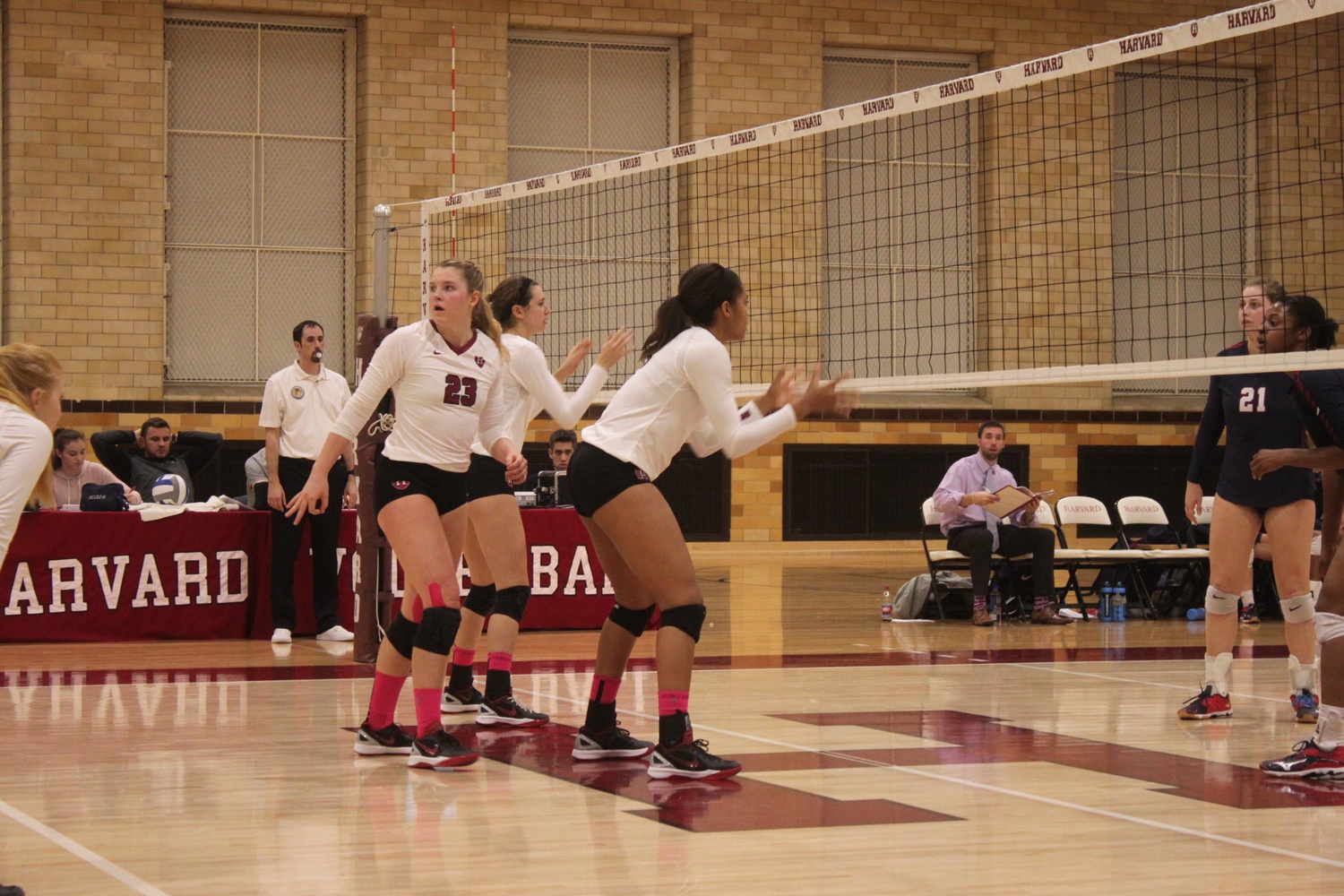 Harvard’s front line communicates and works together during its third and fourth set rallies against Penn. By Casey M. Allen
By Noah Jun, Crimson Staff Writer

The top floor of the Malkin Athletic Center erupted in cheers from students and parents alike as sophomore hitter Ashley Wang delivered a kill to clinch the fourth set for the Crimson (9-10, 6-4 Ivy League) in Saturday’s match against the University of Pennsylvania (6-13, 3-7). The Quakers had cruised through the first two sets, but Harvard clawed its way back in the third and fourth to send the match into a decider. Despite saving five match points, the Crimson could not turn the corner and lost the fifth set 18-16.

“We really focused on key points and used those to win the third and fourth sets,” Wang said.

This weekend’s double-header was Wang’s first time back on the court after she went down with an ankle injury in Harvard’s first Ivy match against Penn on Oct. 1. Nevertheless, Wang picked up where she left off, providing invaluable assistance to the Crimson offense with 14 kills on the night and six in the previous game against Princeton.

“I’m really excited to get back out [on the court] and be with my team,” Wang said. “It’s definitely been a process; I was out for half of conference-play. By watching my team off the court, I learned a lot from this new perspective.”

Wang drew silver linings from her injury and those suffered by other players throughout the season.

“We've definitely grown a lot of depth in our team, as we’ve been through injuries and adversity,” Wang said. “We’ve all grown together, have connected really well, and we can count on anyone to step up and play on any day.”

Perhaps this chemistry explains the team’s turnaround despite dropping the first two sets. The third set saw Harvard take an early lead, and the team was able to continue this gap, crossing over the halfway point at a score of 13-8. A series of kills to the back right corner gave Penn chances to make its way back into the set. Despite having the momentum, the Quakers were foiled by their own service errors, and from the opposite side of the net kills by sophomore outside hitter Nicole Prescott and junior attacker and co-captain Jaimie Rao. The former had 11 kills in the match and the latter had 10. Toward the end of the set, this duo sent the Crimson on a run that reopened the gap and sealed the set 25-17.

Harvard did not let the five-minute break between sets erode its momentum.

As play resumed, three service aces from Prescott and more Quaker errors allowed the Crimson to open up the fourth set with a 6-0 shutout. Kills by Rao and sophomore outside hitter Katie Vorhies, who also had 10 kills against the Quakers, extended the lead to 9-1 before Penn could regroup. Although from there Penn went on a five-point run, Harvard was in control for the rest of the set. The teams traded blocks, kills, and service errors, and each went on two- or three-point runs before the Crimson crossed the 25-point line, eight points ahead of the Quakers, to clinch the fourth set and force a fifth.

As has often been the case this season, Harvard was forced to play from behind. A slow start from the team allowed Penn to easily take the first two sets and forced the Crimson to elevate its level during the third and fourth.

“Tonight, we didn’t come out that strong,” Rao said. “[We were] a bit on our heels. I think we were nervous, and it’s easy when another team is making a run to get a little frantic and almost hope the ball doesn’t come to you. That’s when you’re standing up a little high, and you’re on your heels, so we couldn’t make those killer plays.”

Penn dominated the first two sets as it went on more frequent runs, and the team was also aided by Harvard’s poor ball control and service errors. The match started in gridlock, and the Crimson drew first blood by gaining a two-point lead early. Penn, however, went on a five-point run throughout the middle of the set to go up 15-11. This momentum was propelled by junior outside hitters Autumn Leak and Madeline McGregor. The Quakers would hold the lead provided by their hitters and win the first set 25-18.

The second set went the same way as the fourth, but this time it was Penn that took an early lead. Although Harvard managed to tie it up in the middle of the set, aided by crucial kills from Wang, the Quakers pulled away and took the second set 25-17.

Harvard took its momentum from the third and fourth set into the deciding rush to 15 points. It won the first three points, but Penn countered with a three-point run of its own to keep the fifth set in gridlock. The back-and-forth continued all the way until 11-11 when two kills by Leak and an error from Rao gave the Quakers three match points. With its back against the wall, the Crimson managed to fend off defeat on five different occasions, but finally, the team fell to a kill from McGregor in extra points, 18-16.

On Friday, however, Harvard avenged its 3-2 loss to Princeton earlier in the season, sweeping the Tigers for its first straight-set win of the year. Although the sets were close, with a final score of 25-23, 25-21, and 25-20, 14 kills from Rao and 10 from Vorhies enabled a quick victory for the Crimson. Sophomore and first-year setters Bella Almanza and Rocky Aguirre posted 23 and 16 assists, respectively: a testament to the team chemistry and improvement from its performance in the 2019 season. Wang noted she is excited to bring that into the rest of the season, the spring, and next year.

“We’re looking to go out on a high,” Rao said. “We want to treat every game like it's a championship game because [who knows] what's going to happen in the Ivy League. We're still a contender. We're still one of the top teams, but anyone can beat anyone, so we know we can't take anything lightly. We have to treat every game like it's the most important game we're going to play.”

With only four more regular-season games within the next two weeks, Rao noted a shift in the team’s mentality to be less timid and to have a killer instinct. The team hopes to work on its consistency and to come out to matches firing, rather than having to play from behind.