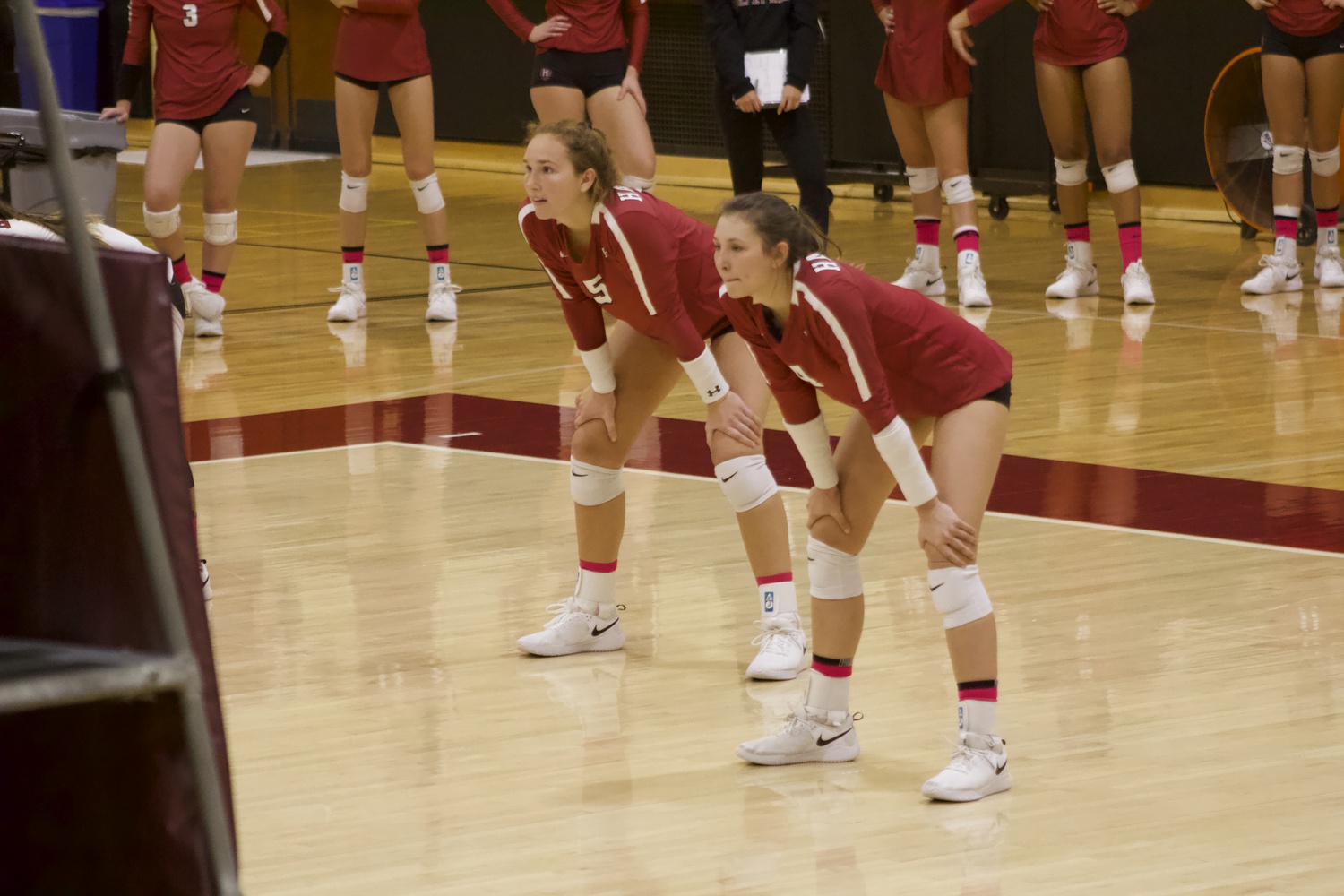 Senior outside attacker Julia Beckmann (#5) appears in a 3-1 win over Penn on Oct. 19, 2019. By Aiyana G. White
By Derek Schaedig, Crimson Staff Writer

In July of 2021, senior outside attacker Julia Beckmann was faced with an extremely challenging set of circumstances. After being elected captain of the Harvard women’s volleyball program in January, Beckmann had previously had an operation performed on her shoulder to repair her long-time torn labrum. This, coupled with not being able to participate in physical therapy post-surgery due to Covid-19 restrictions, left the senior studying economics and psychology in a considerable amount of pain when playing the game she loves. Due to the pain in her shoulder as well as an injury to her knees from overuse, she was forced to stop playing the game that has been such a big part of her life for so long.

“I almost felt like the decision was kind of made for me,” Beckmann said. “I did everything I could for my shoulder and pretty much exhausted my resources.”

But that did not stop Beckmann from making an impact on the game she loved. She decided to stay on as co-captain of the team despite being medically retired.

“I already knew there's no way I want to leave my team,” Beckmann said. “I've spent so much time with them, and they've been the heart and soul of my time at Harvard, so I wanted to be as involved as humanly possible.”

Tasked with transitioning from an on-court leader to a primarily off-court one, Beckmann had a new kind of challenge on her hands. However, head coach of the Crimson women’s volleyball squad Jennifer Weiss knew Beckmann would step up to the plate.

“It takes a special person to be able to adapt into that role, and I think she’s just done a tremendous job with it and is well respected by her peers, so she’s doing a great job,” Weiss said.

When the Student Athletic Advisory Committee (SAAC) member Beckmann knew she had to tell Weiss about medically retiring from the game she loves, she was admittedly nervous. However, Weiss’s response was everything Beckmann had hoped for and more.

“I am so appreciative of her response,” Beckmann said. “She [Weiss] said, ‘What does this mean for you life-wise?’ She really cares about us as individuals.”

Beckmann, who also serves as chief marketing officer (CMO) for the women’s volleyball program, told her team about her medical retirement when she returned to campus in the fall. The team’s response was no different than Weiss’s.

“They were all crazy supportive and understanding and treated me absolutely no different,” Beckmann added. “I couldn't be more grateful for everyone's reaction and response to it.”

The co-captain earning a citation in Spanish had tried many different sports growing up, including basketball, soccer, swimming, and even archery. None of these stuck, but at the age of 12, volleyball did.

After her first volleyball tryout, Beckmann turned to her parents and said “Mom, Dad, this is the sport for me.”

Soon after, Beckmann dropped her other sports and devoted all of her time and energy to volleyball. In just the seventh grade, she piqued the interest of the varsity volleyball coach at her high school in Garden City, N.Y. Having never been done before, pulling the then middle schooler Beckmann up to play with the high schoolers was quite the challenge. To do so, the coach had to jump through many hoops with the athletic department, and Beckmann even had to perform various physical activities to prove that she was able to compete safely with older players, including both running a mile and holding a pull-up for 30 seconds among others.

In her six-year tenure on the varsity program in Garden City, Beckmann was captain for three years — an experience she draws on now as a captain for the Crimson volleyball squad.

“I think that helped maturity and learning-wise hugely for me because I was leading players that were older than me, but I think it gave me a lot of confidence in my abilities,” Beckmann said. “I think you just mentally become a much stronger player when you have people relying on you.” 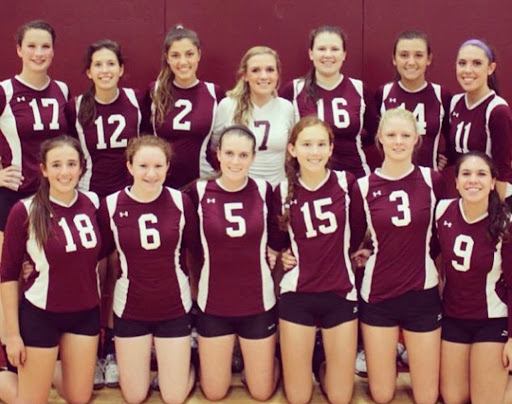 Beckmann (#15 in this picture) played six years of varsity volleyball in high school, beginning in seventh grade and captaining the Garden City squad for three years. By Courtesy of Julia Beckmann

However, at Harvard, Beckmann has not always had a role similar to the one she held in high school. She has struggled with injuries throughout her career for the Crimson, and this adversity left her in a more supportive role on the squad than she had previously.

“I had never really sat [on] the bench before,” the Pforzheimer House resident said. “But I'm really grateful for that time because I think I learned a ton.”

Similar to Beckmann, junior co-captain Jaimie Rao has served in various roles during her time on the women’s volleyball team. In Rao's first year on the squad, she did not see a lot of game action to start. The duo’s experience in serving different roles has prepared them not only for captaincy but also for navigating the unique position they are in now in leading their team with Beckmann being medically retired.

“I feel like it’s a really great perspective to have because I just remember what it’s like to be a freshman and be terrified,” Rao said. “When I became captain, my goal was to make everyone feel welcome, everyone feel valued, and to remind everyone that we’re doing this for fun.”

The Crimson is going to need every bit of experience that Beckmann and Rao have to offer this year. Like many Ivy League teams, almost half of the squad is new to the program. The adjustment coming from high school and club teams to college is a challenging one for most, so the team draws on Beckmann and Rao’s experience to help ease that transition.

With the daunting task of leading a program of women, half of whom has never played a college volleyball game before this season, Rao and Beckmann both approach leading their team in a similar way.

“We really value having a team that’s positive and confident,” Rao said. “We really don’t stand for any negativity.”

Beckmann is on the same page as Rao.

“We really want our team to just have more fun and just enjoy the sport more,” Beckmann said. “I think we've both upheld that and really kind of made it happen.”

Leading a consistently Ivy-League-championship-contending squad of women is a lot of responsibility. Nonetheless, Rao and Beckmann have found a way to distribute the expectations of captaincy given their circumstances.

“I think I kind of do a little bit of the day-to-day encouragement and leading the team as we’re competing to play the best that we can while Julia is more in charge of overall attitude, overall happiness, logistics, making sure everyone is on time,” Rao said. “She has the bigger picture stuff.”

Beckmann helps take on different responsibilities than Rao on game days as well. When Rao is preparing herself to perform, Beckmann makes sure everyone has what they need to be their best as well. She reminds everyone when the coaches will come to speak to the team and when they need to warm up for the game. She records various statistics, and she manages any logistical issues that may occur on game days.

“[Beckmann] does all the little things that bring success to any program or any group,” Weiss said.

Beckmann is also able to see things, similar to coaches, that Rao is not able to see when playing. Beckmann acts as a line of direct communication between the coaches and her teammates in helping them succeed on a broader scale than a play-by-play approach.

The captain election process for Harvard athletics is completely peer-based — coaches or administrators cannot tip the scales. When someone is chosen to lead the program, a lot of thought and deliberation inform the decision. For Beckmann, being elected captain was an extreme honor.

While leading as a medical retiree is an adjustment for Beckmann, she had some inspiration to draw from in Michaela Dews ’17. Dews also was elected captain and had to medically retire under Weiss’s time as head coach of the Crimson. Dews took on the challenge of staying on as captain under unique circumstances, and knowing that someone else has done it has helped Beckmann in her role as co-captain.

“I kind of have used Michaela as my role model almost,” the Student-Athlete Wellness Leader (SAWL) said.

Head coach of the women’s volleyball program Jennifer Weiss knew that Julia, drawing on Dew’s experience, was up for the task.

“Not everyone has the mentality that Michaela and Julia have and the maturity to step away but still lead and be positive,” Weiss said. “I knew in Julia that I could trust and we would have mutual respect for one another so that she could be in that role.”

The Harvard women’s volleyball program, under the leadership of Beckmann and Rao, is currently fourth in the Ivy League standings.

While the team continues to pursue excellence this season, Beckmann’s final season of volleyball probably is not what she pictured when she was that 12-year-old playing with the varsity team, but she is proud to lead her team in any way she can.

“I think it's really exciting,” Beckmann said. “It's awesome to be a part of, and I definitely wouldn't change it for the world.”