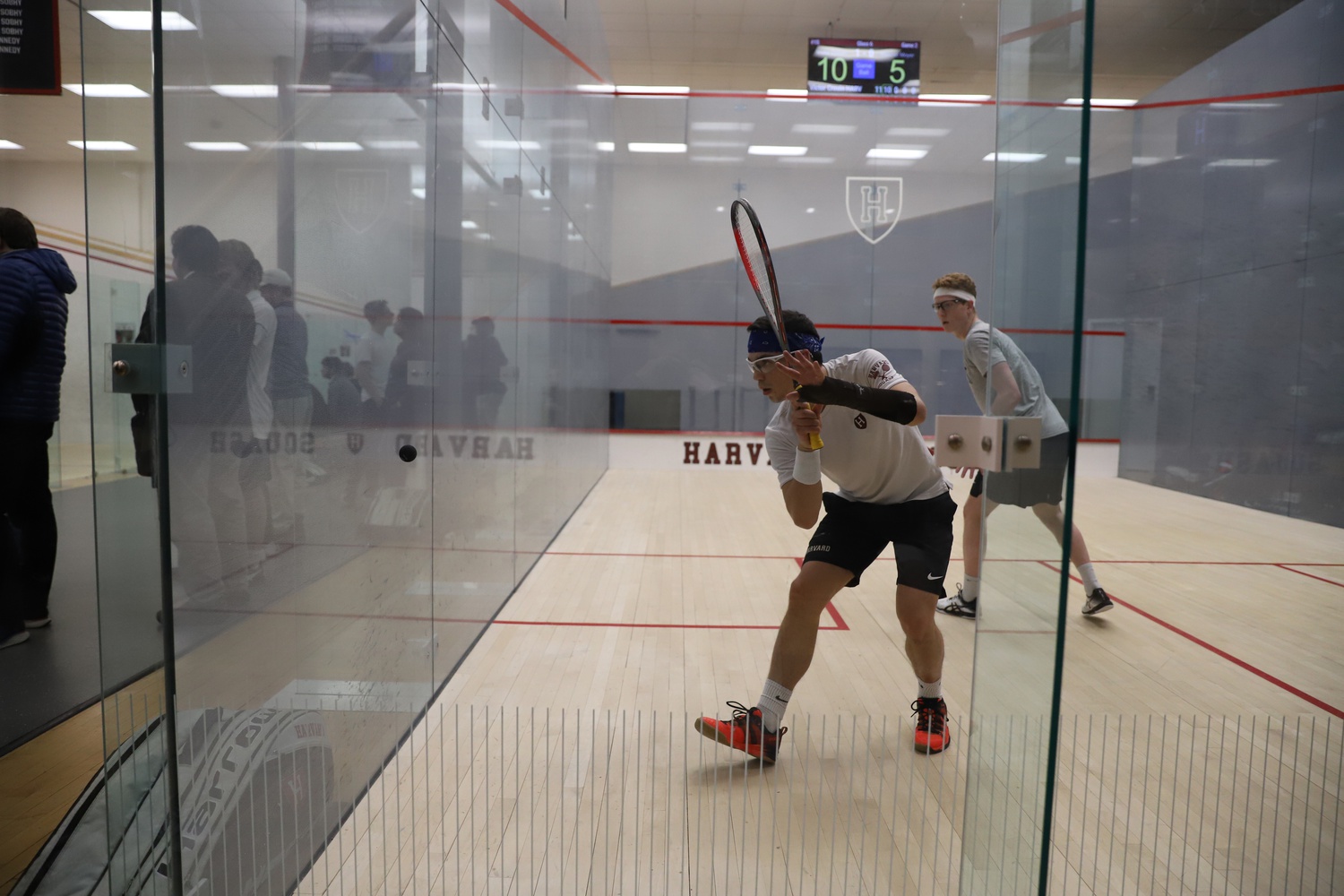 Harvard men's squash, pictured above in 2020, has been dominant to start the 2021-22 campaign, coasting to a 3-0 start with wins coming at a combined 27-0 margin. By Owen A. Berger
By Ever A. Marinelli, Contributing Writer

“The culture on the team is as good as it has ever been … with brilliant captains and leadership,” Harvard head coach Mike Way said. “I think we’re in contention for a title, but because there’s been two seasons since [competitive play], we’re not sure what our opposition looks like, so it’s going to be exciting from that perspective.”

Almost two years away from the competitive squash arena left the Crimson hungry to return to the court. In the time off, players worked to stay in shape and prepare for a hopeful return, but for many, finding access to courts and opponents was a difficult task. Not all players were able to find courts or open gyms during the pandemic, and for those with access, many were only allowed to hit solo.

“Overall, I think the guys have come back in pretty good shape,” Harvard senior captain Sam Scherl said. “The various Covid restrictions had a large effect on how much people were able to train, but I think overall, the guys really did the best they could in the circumstances and showed up ready to perform to the best of their ability this season.”

Scherl and co-captain Marwan Tarek were instrumental in keeping the team organized and motivated during the time off. Way lamented that team Zoom meetings became more of a chore than a benefit and that, due to the cancelled season, many players felt they were training in a vacuum. He said the captains were able to step up and help the squad remain focused and engaged.

That focus paid off immediately in Harvard’s pre-season games, when the Crimson narrowly beat out the University of Pennsylvania, 5-4, in an Ivy League scrimmage. The Ivy schools are traditionally the Crimson’s most challenging opponents, so the victory in the Ivy Scrimmages bodes well for January, when it will face conference opponents again in an official setting.

Harvard’s early success carried into its first matches, where it swept all three opponents. The first match of the season against Rochester saw the Crimson lose just one of the 28 games played by its nine starters. Freshmen Neel Joshi and Tate Harms began their Harvard squash careers with 3-0 victories over their opponents.

The Crimson experienced similar success in consecutive 9-0 matches over Brown and MIT. Harvard won all 27 games against Brown, with two more first-years — Erik Wang and John Ho — making their collegiate debuts with respective 3-0 wins over opponents from the Bears. Freshman Connor Stoltz made his debut the following day with a 3-1 win against his opponent from MIT, against which Harvard won 27 of the 29 games played.

The decisive 9-0 wins have been a confidence boost as the Crimson prepares itself for more difficult opponents.

“The team has performed well so far, and the real test of our season is going to be in January,” Scherl said. “I think these matches have been really helpful to get a sense of where everyone’s playing, where to improve, and kind of gearing up for when […] we’ll really be tested against the other top teams.”

The team has two more trials before the meat of its season in January, following the winter break. Harvard will face off against Tufts on Tuesday before playing Dartmouth on Wednesday. Way said the Crimson approaches every opponent with equal respect and effort and will be focusing especially on No. 11 Dartmouth, which has not yet played its first game.

“Dartmouth is a team where, on paper, we are the favorite, but we always have tough matches against [them],” Way said. “With Dartmouth, we have to prepare as if we are playing one of our top competitors. The match [this] Wednesday is a check-in – are we on track?”

Historically, Harvard has been one of the strongest men’s collegiate squash teams in the country. It secured undefeated seasons during its national championship runs in 2020 and 2019. The pandemic put a pause on its success, but the squad has picked up where it left off thus far in the 2021-22 season. The Crimson hopes to maintain its winning streak as it faces Tufts and Dartmouth this week.