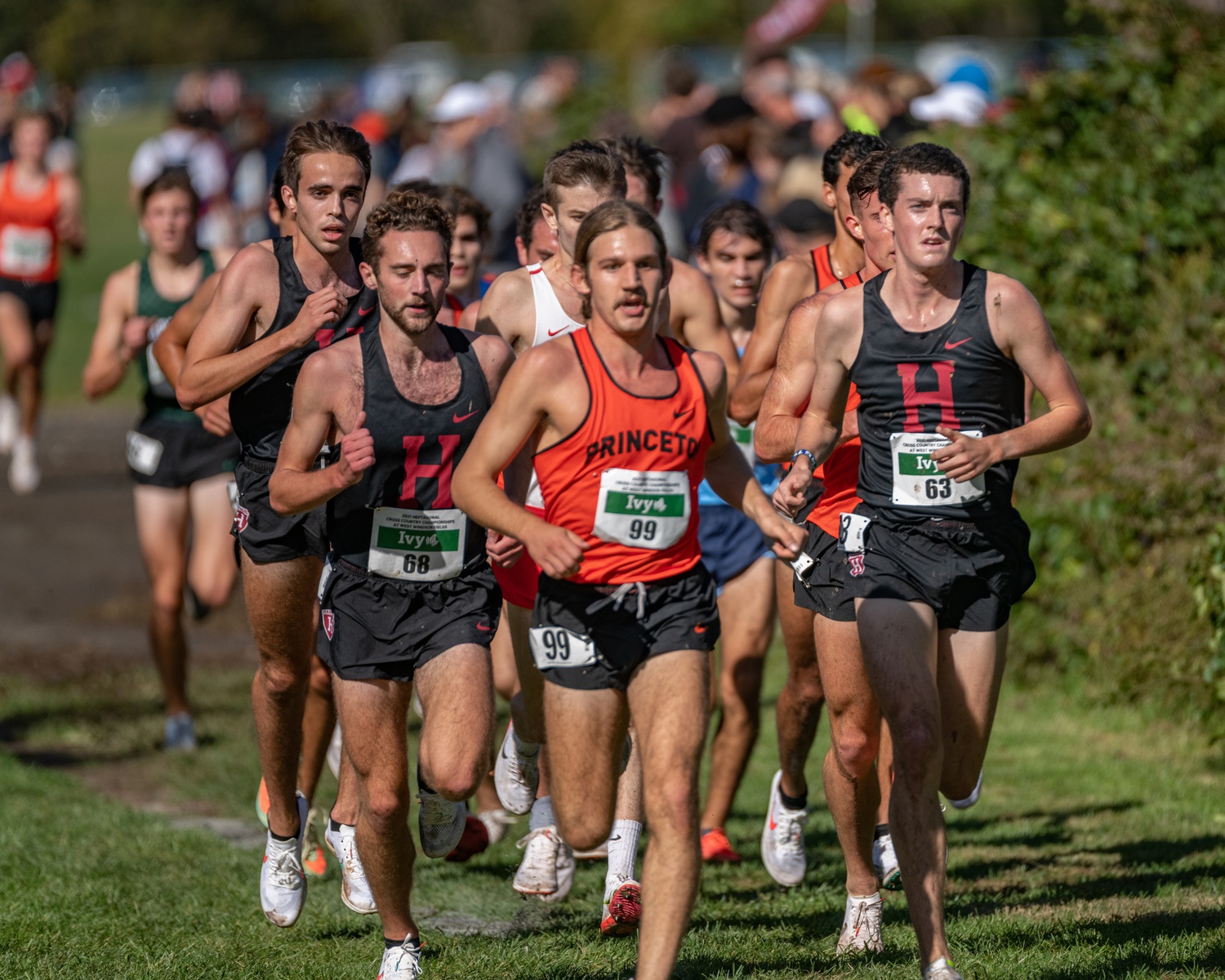 Multiple Harvard men's cross country runners cluster to the front of the pack at Ivy League Heptagonal Championships earlier this season. Last weekend, both the men's and women's programs capped their seasons at NCAA Nationals, with 12th and 25th-place finishes respectively. By Courtesy of Harvard Athletic Communications
By William Connaughton, Crimson Staff Writer

In Tallahassee, Fla., the Harvard men’s and women’s cross country teams competed in the NCAA Nationals for the second season in a row, with both teams improving on their 2019 finishes. When the dust cleared, the men finished in 12th and the women in 25th.

The No. 25 Crimson men had their best race of the season at nationals, capturing 12th place and crowning three NCAA Division I All-Americans in the process. The 12th-place finish in the 10k race was not only three spots ahead of the strong 2019 team but was also the best finish at the event since 1968.

The Harvard men were led by three top-40 finishes. First-year Graham Blanks, fresh off his second-place overall finish at NCAA Regionals, placed 23rd with a time of 29:21. Blanks opened up the race quickly in 17th and held on to the best individual finish at the NCAA nationals race since Maksim Korolev ’14 captured third place as a senior. This performance even topped the strong 28th-place finish in 2019 of Kieran Tuntivate ’20, one of the most decorated Harvard runners in recent years.

Behind Blanks was senior Matthew Pereira, fresh off winning Ivy Heps, who finished in 35th with a time of 29:28. Pereria continued his dramatic improvement from 2019, finishing over 30 spots ahead of where he was in the 2019 NCAA Nationals race. Finishing only three seconds behind Pereira was sophomore Acer Iverson, who finished in 40th with a time of 29:31. The Crimson has been supported by a strong pack of top three runners all season, and all three were able to get out quickly and hold their positions, helping Harvard capture needed low point values.

“We approach NCAAs with the same focus as most meets throughout the season, just with the awareness that it will be the most crowded and messiest field of the entire season, which is a new challenge to navigate compared to smaller races like Heps,” said Pereira on how nationals is different from other races.

Holding up the back end of the scoring was senior co-captain David Melville, who placed in 156th with a time of 30:39, and sophomore Ben Hartvigsen, who finished in 178th with a time of 30:58. Melville improved upon his 222nd-place 2019 finish by over 50 positions, a big gain for the senior from Greensboro, N.C.

“We train the whole season with the NCAA Championships as the focus, both with the timing of our peak and our style of training,” noted Pereira on the run-up to nationals. “Coach Gibby's training is very aerobic and geared towards the longer distances, so I think we were well prepared for the step-up in race distance to 10k. The two weeks leading up to NCAAs are also really the first time we significantly let up in the volume and intensity of training.”

The Crimson was able to beat 13 teams ranked ahead of the team going into the race, a testament to the performance top to bottom from the Harvard squad. This included overtaking No. 16 Princeton, who beat the Crimson at the Ivy League Championships, and No. 19 Syracuse, who had beaten Harvard at the NCAA Northeast Regionals. Blanks, Pereira, and Iverson were all named NCAA DI All-Americans, becoming the eighth, ninth, and 10th runners to earn the honor in Harvard history. 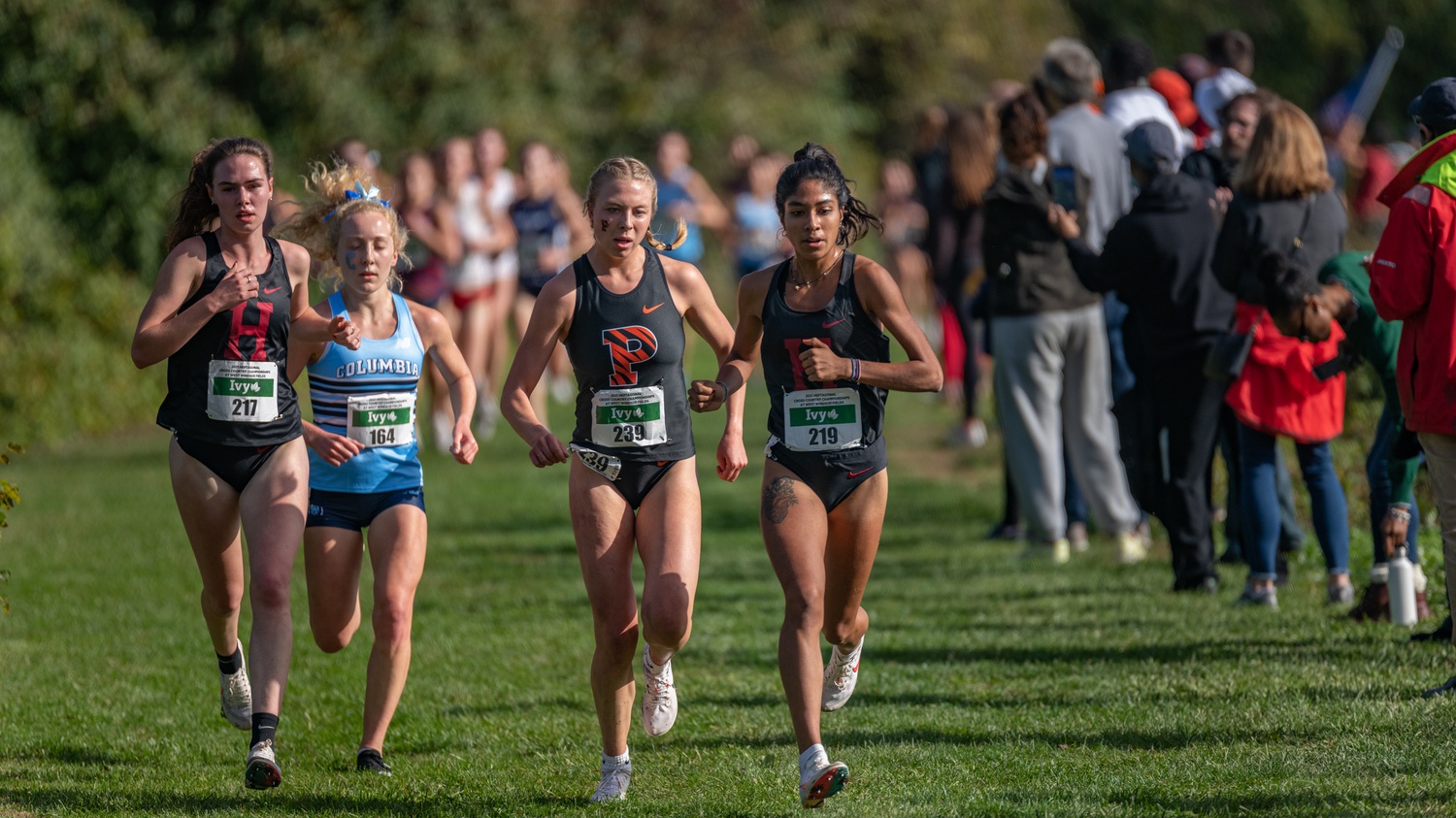 Iz Sagar (#219) leads the way at Ivy Heps. Individually, Sagar contributed to the Harvard scoring effort at NCAAs, finishing 173rd with a time of 20:57. By Courtesy of Harvard Athletic Communications
Advertisement

Meanwhile, coming into the race, the No. 24 Crimson women were coming off their strongest stretch of the year, winning both the Ivy League Championships and the NCAA Northeast Regionals. The team had developed a central core of runners that had kept their point totals very low throughout the championship season.

In the 6k race, the Harvard women came out to a fast start to open the contest, with four scorers in the top 110 places at the 1170m mark. However, as the race progressed, some of the Crimson runners were not able to hold onto their positions. Nevertheless, Harvard finished in 25th in the championship meet, beating out No. 20 Syracuse on the way to its best finish since 1983 — and six spots ahead of the squad’s finish in 2019.

“The past few weeks of racing have really shown how strong this team is and what we are capable of. We definitely felt a bit disappointed with our results from the middle of the season, so it was really exciting to be able to win Heps and Regionals,” said Pendergast while reflecting on the season. “This team also had the highest place for Harvard women’s cross country in modern history, which shows just how special this team is. We left NCAAs proud of what we accomplished, but definitely knew we had things to improve on.“

Rounding out the scoring for the Crimson was sophomore Eloise Freitag in 147th with a time of 20:47 and sophomore Iz Sagar in 173rd with a time of 20:57. Only 25 seconds separated the first and the last scorer for Harvard, even though those 25 seconds represented 63 spots in the race. These slim margins show the difficulty of the NCAA meet that has some of the best runners on the strongest teams in the country all competing in the same race.

“Nationals is a great opportunity to showcase our team on a bigger platform compared to regionals or heps,” said Freitag on how nationals is different from prior championship races. “Even though the field is more competitive, we maintained our team identity and strategy by going out and staying out.”

The Crimson women had a fantastic overall season, coming on late to be a dominant force in the Ancient Eight and the Northeast Region. Despite being unranked until the NCAA nationals race, Harvard deserved its spot as a top-25 team in the nation this year, and the Crimson will look to build on this result in track and field in the winter and spring and again in cross country next fall.

For the seniors on both the men’s and women’s teams, nationals represented their last cross country race for the Crimson. However, they have eyes to the future, excited to see what the team is capable of with plenty of underclassmen as strong contributors to the team this year.

“It’s been a really incredible year for this team, and I know that our program is only getting started,” Pendergast commented. “It's truly an honor to be a captain to such an amazing group of humans, and I can’t wait to see what they are capable of in the future.”

Both teams are incredibly proud of what they have accomplished under head coach Alex Gibby in the last four years as Harvard has emerged as one of the best cross country programs in the Ivy League and the Northeast Region and a consistent force in NCAA Nationals.

“This season was a lot of fun and strong evidence of how far our program has come since Coach Gibby started coaching here four years ago,” Pereira reflected. “I'm really thankful to have been around during that transformation and to have had the chance to improve alongside the program and accomplish goals that seemed far out of reach when I started.”

Both teams will have a few weeks off from training to rest and recover before starting training back up again for winter track and field.