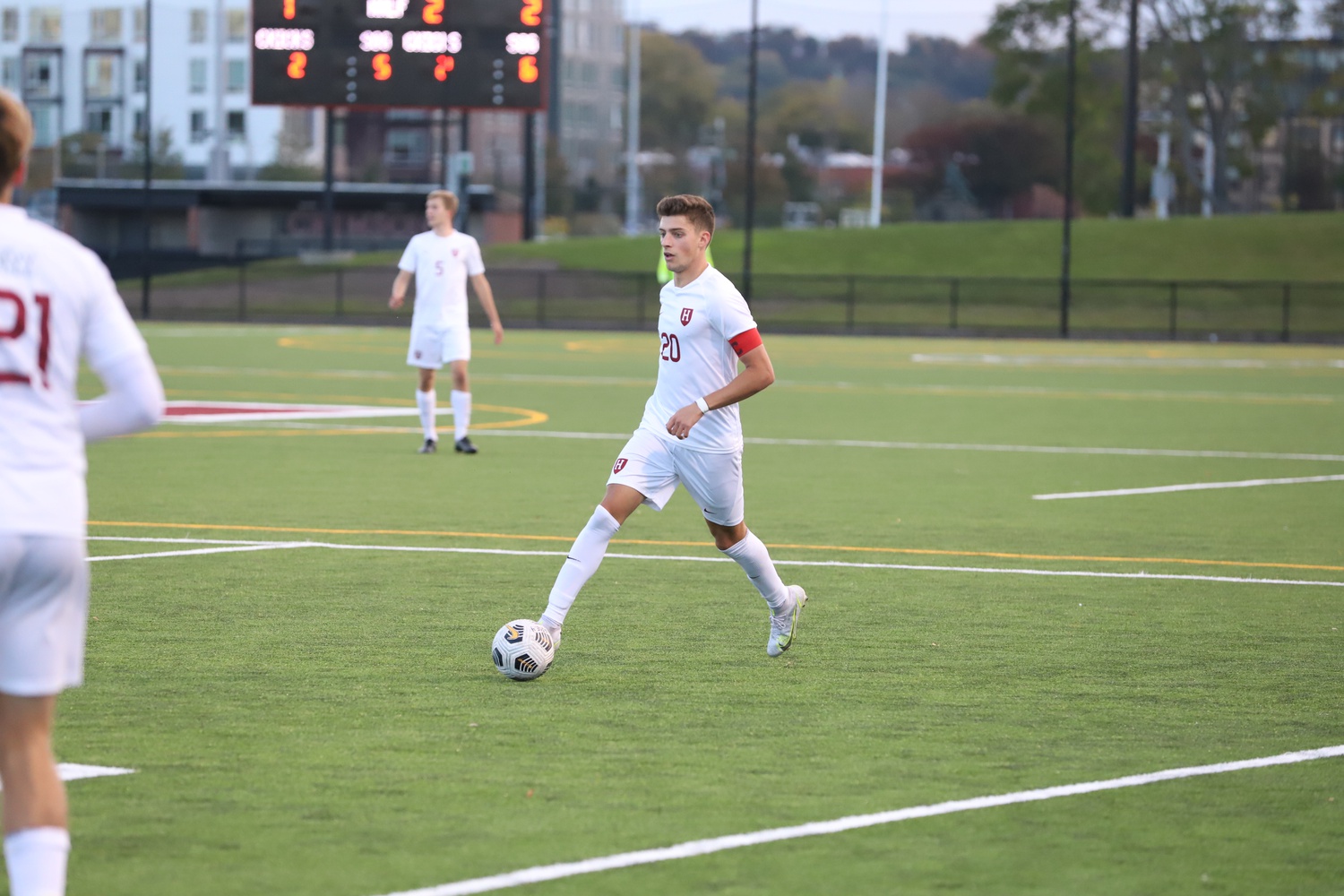 Defender and captain Fernando Docters controls the ball in last week's loss against Princeton. On Saturday, the Crimson rebounded from the 4-1 defeat to the Tigers with a 1-0 win over Dartmouth. By Owen A. Berger
By Eamon J. McLoughlin, Crimson Staff Writer

Harvard grabbed its first Ivy League win of the season by a score of 1-0 in a wet and physical matchup on a rainy Saturday afternoon at Jordan Field.

“I was thrilled with our character and battle in it, and I think that's something that hasn't always been there for us,” said coach Josh Shapiro of the win. “I’m really proud of how they fought through it.”

The game got off to an exciting start as the Crimson found the back of the net in under 60 seconds. The move started when senior midfielder Cornelius Bencsik forced a turnover in Dartmouth’s defensive third and dished the ball to junior forward Martin Vician.

Vician found sophomore midfielder Willem Ebbinge out wide, who beat his man to find a yard of space and crossed back in to Vician, who poked the ball past the keeper with his first touch for his fifth goal of the season, and his fourth in six games. The assist was Ebbinge’s team-best ninth of the season.

After scoring, Harvard looked as if it might score every time it went forward in the first fifteen minutes of the match. Bencsik was found in space in front of goal by first-year forward Alessandro Arlotti with a smart through ball in the 10th minute, but he shot wide. Just over a minute later, Arlotti got on the end of a cross from senior defender Havard Hjermstad, but his effort hit the post. Bencsik and Arlotti combined again in the fifteenth minute, but Arlotti was called offside as he ran through on goal.

The game was a physical one, with lots of late challenges on both sides, but the referee elected to keep the cards in his pocket until the last 10 minutes of the game, with the Big Green receiving three yellow cards in the final minutes of the match. The most egregious of these incidents came when defender and captain Fernando Docters was knocked down and then kicked on the ground, with Dartmouth’s senior defender Jordan Bailon lucky to not see red for the incident.

As the game progressed, the rain got worse, making it harder for either side to create clear-cut chances. Despite these worsening conditions, first-year defender Jan Riecke nearly scored his first goal for the Crimson, heading a corner just wide in the 50th minute.

The Big Green settled into the game later on, nearly equalizing on a few occasions in the second half. In the 59th minute, junior goalkeeper Oskar Nilsson found himself in a one-on-one situation with the Dartmouth striker but was able to cut the angle down and force the shot onto the post and out to safety. Then in the 63rd minute, Nilsson came up big again, saving a shot from the edge of the box at full stretch to deny the Big Green the equalizer.

“We knew with the conditions and everything that it wasn't gonna be pretty,” Nilsson said of the match. “But I mean, we fought, and we saw it out, and that’s what matters.”

Nilsson capped off a strong performance with a great save in the closing seconds of the game. When the Crimson failed to clear a ball in the box with twenty seconds to play, it fell to Dartmouth’s striker near the penalty spot. He leveled a low shot in traffic, which Nilsson managed to get down to and push wide, ending the game and securing Harvard’s first Ivy League victory of the season.

“It felt great — it's what I love to do,” Nilsson said of the save. “Obviously, we don't want to concede a chance like that at the end of the game. But it felt great.”

The Crimson now heads down to New York to face Columbia in its final road match of the season, with kickoff set for 8 p.m. on Saturday.